Back to my blogging roots, Pt. 1 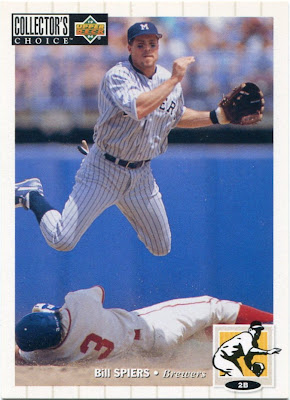 I'm proud to say that I've become a bit of a trading "vet" here in the blogosphere.

While it has its highs and lows, I do seem to receive a steady stream of packages on a day-to-day basis. And, just as importantly, my outgoing cardboard seems to be accumulating at a similar rate.

Over the past year-plus of my blogging career, I've made quite a few trades with many of the great people in the blogosphere, bloggers and readers alike.

In fact, I'm a little jealous of the people who have lists on their blog that showcase the amount of different bloggers with whom they've traded. I can't help but wonder why I didn't start one of those things earlier in my "career".

Even with all the great cardboard that has been pouring in lately, though, a few have stood out for one, special reason.

These particular packages took my back to my "blogging roots".

It's a great honor to receive cards from the people who first made me realize just what a wonderful place this is. They're the "pioneers" of my blogging life, if you will.

In fact, a few packages from my fellow "pioneers" arrived in the mail over the past week.

The first came from a guy named Greg. Of course, many of you probably better know him as Night Owl, the mind behind the standard in the blogosphere, "Night Owl Cards".

I've mentioned it on the blog many times before, but Greg's blog is the one that introduced me to this terrific place. I read his blog for months before deciding to start one of my own. I've drawn inspiration from his writings for as long as I've been a blogger.

And, if that wasn't enough, the guy can put together one heck of a trade package to boot.

Although I can't say I've ever heard of Bill Spiers, the above card is a great indication that Greg reads this blog on at least a semi-regular basis.

After all, it hits a "trifecta" of themes in my collection.

True, those "old-style" Brewers uniforms aren't authentic throwbacks. But I still tend to place "faux-throwbacks" under the throwbacks category nevertheless.

On top of that, we have a terrific double play shot, one that'll fit right in with all the other great "double dip" cards I've been accumulating lately. 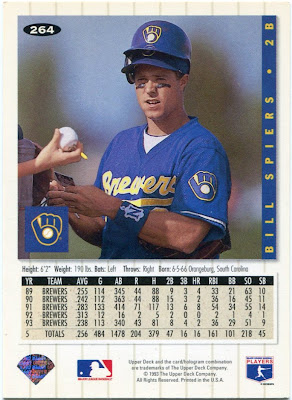 ...we find a treasured "autograph" shot for my collection.

If you want to take my recent plea for Collector's Choice into question, then I guess you could consider this one a "quad-fecta".

Either way, Mr. Spiers here has the makings of one special piece of cardboard. 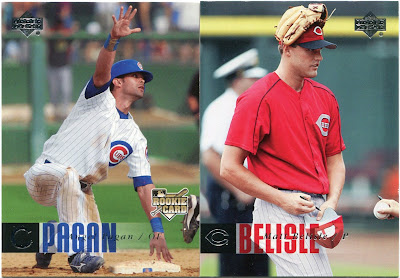 Still, upon closer inspection, I think most people would find that UD did an absolutely stunning job with their photography that year.

Plus, I'm starting to think that the Cincinnati Reds have a special team rule in place these days.

All team members must have gloves atop their heads when signing autographs.

Between the likes of David Weathers and Matt Belisle, it's the only reasonable explanation. 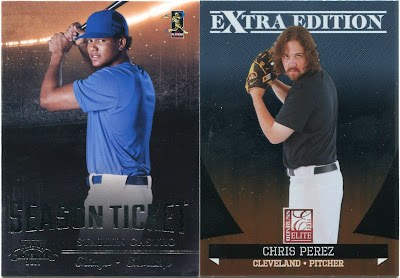 Both of these are the first of their kind in my collection.

I never planned on owning anything from the recent Playoff Contenders or Donruss Elite releases, but I had a feeling some would wind up in my hands sooner or later.

After seeing a few in person, I'll be the first to admit that they're a bit tacky.

The painfully logo-less caps and shirts are so tacky, in fact, that I'm actually starting to like them a bit. Tell me that epic Chris Perez card doesn't bring a smile to your face.

If I didn't know any better, I'd never believe that Perez was actually a major league pitcher.

To me, he looks more like that creepy guy that used to hang out at the park. 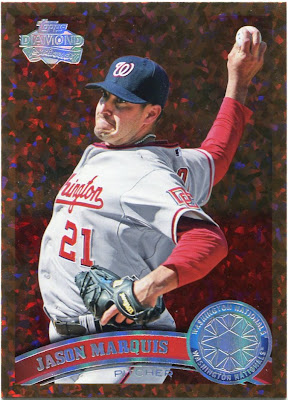 Now I can finally enjoy my "liquorfractors" without the fear of winding up in cardboard jail. 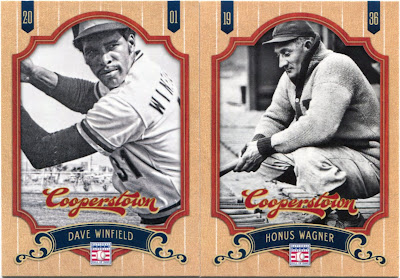 Apparently, Greg took a quick peek at my "set needs" page in preparation for this package.

My "head-bumping" Panini Cooperstown wants have been getting massacred lately. After this package from the Owl himself, I'm down to my last handful of these.

Plus, it looks like the folks at Panini agreed with me.

No matter how they try and hide it, Dave Winfield is a San Diego Padre. 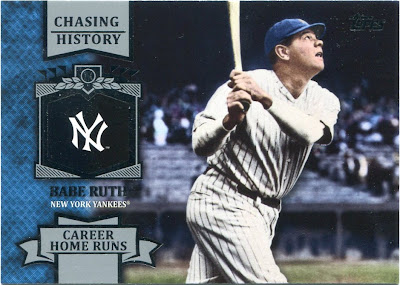 I just realized something.

I'd probably like these "Chasing History" inserts a whole lot more if every single subject came in horizontal form.

This is a surprisingly nice piece of the "Sultan of Swat", if I do say so myself.

Perhaps an all-horizontal insert set like this wouldn't be a bad idea at some point in the future, Topps. I'm just putting that out there.

Plus, you might want to lose the foil/non-foil "insert parallels".

I doubt anybody likes those things. 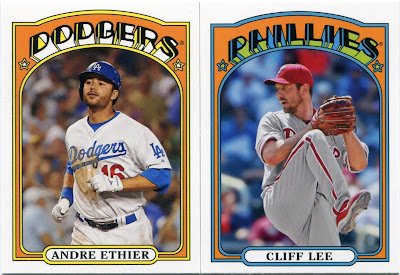 Given my love for bite-sized cardboard, I was unbelievably happy to see a few '72 minis fall out of Greg's mailer.

Still, I was a little surprised to see the inclusion of Mr. Ethier there.

After all, Ethier is a Los Angeles Dodger. And, last I checked, Greg collects Dodgers.

Plus, although I'm still a night card novice, I'd venture a guess that the Ethier is indeed an "awesome night card" as well.

With all the people that read his blog, though, I figure Greg received multiple copies of it from a few fellow traders. Although I collect Ethier, I know I would've sent it to him had I pulled it.

In the end, I'm just glad that Greg decided to pass on one of those extras to me. 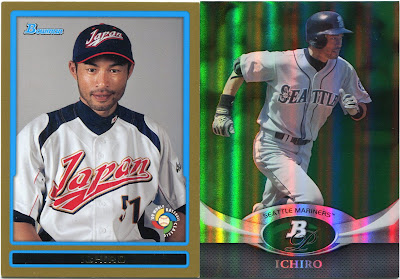 After all was said and done, though, I think these were my favorites from Greg.

Ichiro has that ability to simply "overtake" a trade package.

More than perhaps anyone else in my binders, I get a tremendous amount of joy out of collecting the guy.

He's one of my "heroes" in the game of baseball.

At the same time, I guess you could say that Greg is one of my blogging "heroes". Without him, there's a good chance I wouldn't have even started this blog.

In fact, had I not stumbled across his blog on that one fateful summer afternoon, I'd probably still be living a sheltered life on the forums.

I don't even want to think about how that timeline would've played out.

For everything.
Posted by Nick at 1:30 PM

I saved you from the forums?

The uni Spiers is wearing is actually an authentic throwback to the ones worn by the old American Association (AAA) Milwaukee Brewers (who moved to Toledo and became the Mud Hens in 1953 when the Braves moved to Milwaukee from Boston).