Back to my blogging roots, Pt. 2 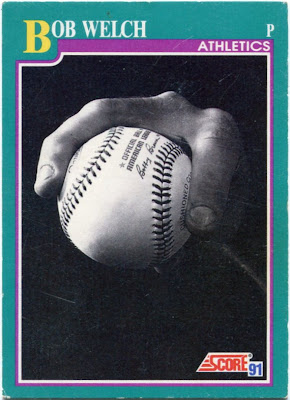 Don't say I didn't warn you about these trade posts. Expect to see a steady stream of them throughout the next week or so.

Perhaps I'm misguided in my way of thinking, but I like to imagine that most members of the blogosphere are "trade post" kind of people. In that case, I hope you enjoy this latest installment of a few recent trades that brought me back to my "blogging roots".

If my first blogging hero was the one that first introduced me to this awesome community, than this afternoon's trade partner was the person who showed me just how accommodating and generous the people of the blogosphere could be.

As you'll soon see, his amazing unselfishness continued with this trade package in a big way.

However, while he's been quick to find a few "bigger" pieces for my collection during my time as a blogger, William has consistently managed send me little bits and pieces of interesting cardboard as well.

Or, as he labeled it in a recent post on his blog, he likes to send me cards from the "random randomness" realm of the hobby.

Random randomness. Even I can't put it much better than that.

Speaking of which, I bet I know what you're thinking right about now.

"What's with that card at the top of the post?"

I myself had a few questions when it fell out of William's trade package.

For one thing, I couldn't help but wonder why Score chose to feature (what I hope is) Bob Welch's disembodied hand in a split-fingered fastball grip. Given that he'd won 27 games the year before, I think he deserved a better card than that.

On top of that, I was floored by the fact that I'd never seen or heard about it before. Surely such a strange card would get regular airplay around the blogosphere.

Lastly, and perhaps most importantly, I have to ask.

Am I the only one who thinks this card is a bit creepy?

I can't quite put my finger on it, but something about it just seems rather eerie to me. Aside from the fact that, you know, it's a disembodied hand and all.

It's certainly one of the strangest cards I've come across in a long, long time. 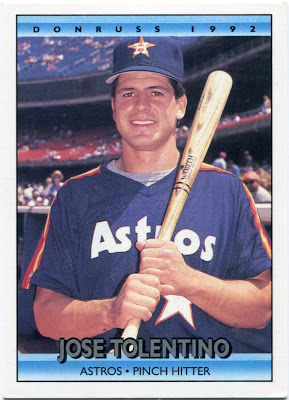 Speaking of eeriness, I'd like to tell the tale of Jose Tolentino's 1992 Donruss card for a minute, if you'll indulge me.

I was first introduced to this strange piece through the blogosphere a few weeks ago. Given the odd and rarely-seen position of "pinch hitter" on it, I couldn't help but think one thing.

Lo and behold, guess what popped out of William's latest trade package?

The very same card of the "pinch hitter extraordinare" himself, Jose Tolentino.

His 1991 season consisted of 59 plate appearances over the course of 44 games with the Astros, which makes the "pinch hitter" label fairly appropriate.

Interestingly, though, they'd be the only games he'd play in the bigs.

While his career may have been fairly brief, Jose Tolentino will always live on in the world of strange cardboard. 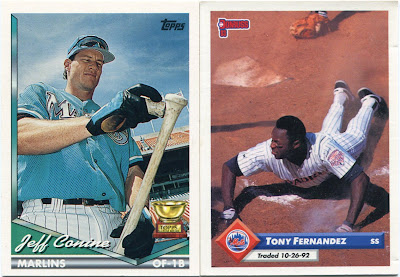 Not a lot of rhyme or reason to these two.

Except that they're both awesome, of course.

I'm starting to think that Jeff Conine may be one of the less-appreciated "cardogenics" the hobby has ever seen.

It's not often you see much "bat handle" action going on within a baseball card. 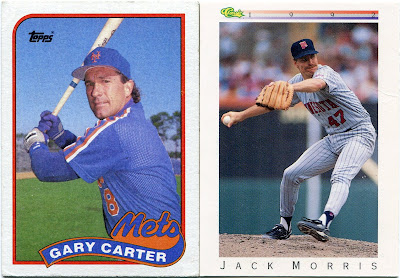 Thankfully, William helped add a few new pieces to some of the more recent player collections I've taken on around here.

I'm especially fond of anything from Jack Morris's later years, given that every non-Tiger uniform he sported could be considered "unfamiliar".

And, yes, it looks like I actually still need a few cards from 1989 Topps.

I can't believe it, either. 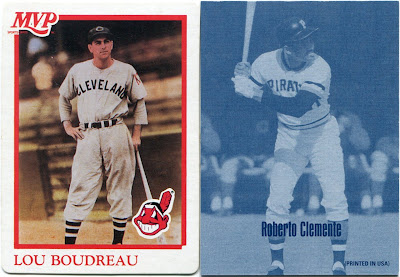 I'd have to go back and confirm this, but I'd guess that ninety-five percent of my trade posts have featured HOFers in one way or another.

By including the likes of Boudreau and Clemente, William once again upped the percentages by a bit. 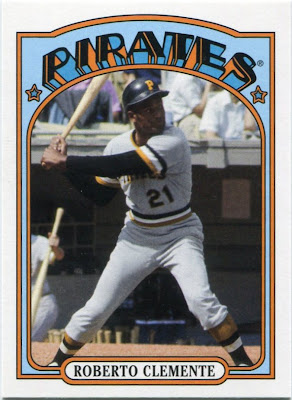 Although I still need quite a few '72 minis from this year's Flagship release, this was probably the one that I'd most desperately wanted.

I like the fact that Topps added a few guys who were actually part of the '72 checklist into the mini side of things.

And, yes, thanks to an epic vintage discount bin, I can proudly say that I own a copy of Clemente's actual 1972 Topps card.

The mini is just icing on the cake, as far as I'm concerned.

Still, try as he might, William just couldn't make this the absolute best piece in the "loot" he sent over.

He had to go and top it with this. 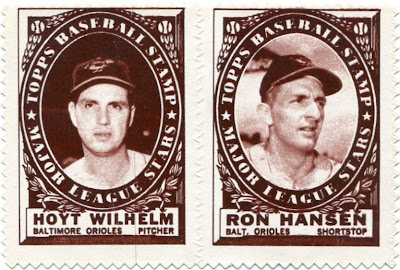 After that, a Topps short-print.

Somehow, William managed to add yet another amazing piece to my still-budding Hoyt Wilhelm collection with this uncut pair of '61 Topps Stamps.

Although I've seen a few of these in-person before, I never thought I'd own one. Especially a copy of the Hoytster himself.

In the note he included, William said that he picked up this oddball off of COMC as a little "birthday gift" to me.

William, I cannot thank you enough for that. And all the other terrific "random randomness" you found, for that matter.

When I first entered the trading market around here, I was way too concerned with the whole "book value" fiasco. As far as I knew, a trade was "even" if the book values were the same.

William was the first to teach me one of the most valuable lessons I've learned during my time around here.

Whether it involves one card or a thousand, a trade is "worth it" if it makes the other person happy.

That's something I've applied to each and every trade package I've sent out during my blogging life. And, because of that, every single mailer I've shipped has indeed been "worth it" to me.

In the world of trading, nothing else matters.

I just wish I'd realized that a few years ago.

Thanks to people like William, I've come to my senses.
Posted by Nick at 1:30 PM

Why did I just know that as soon as I posted that Tolentino card, it would make an appearance on your non-yet visible "gotta have it" list?

Funny thing is, I had no idea about the Tolentino card; I included it and the Conine because you had said something about liking bat cards and those both featured the bats pretty prominently. I really appreciated the kind words in your post, I read it and re-read it probably 3 times just because it made my day. I'm glad you like the stuff!

1991 Score also has a card which is just an American Flag. (This was during Desert Storm)
Conine has a card where he is playing racquetball.

Don't know how I missed this post the first time around. I'm glad you are a very good linker. Anyway, my point of posting is that Welch DID get a better card in 1991 Score. He got several cards in that set due to his amazing season. His regular card has a black border and is quite boring. This one might be a little bit creepy, but at least it more memorable than your standard boring pitcher card.