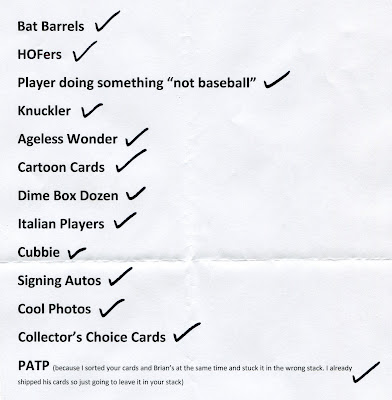 It appears as though a new fad has hit this blog.

I guess it all started with a trade package I received near the end of January.

From what I can tell, it's starting to catch on around here.

These self-labeled "trade checklists" are quickly becoming the new trend in my cardboard-swapping life.

This fad, however, is one I can fully embrace. Which is more than I can say about almost literally every other "trend" out there in today's world.

The "checklist" you see above fell out of a recent package from "friend of the blog" and fellow blogger Adam from the Red Sox-centric "Thoughts and Sox".

Adam and I have been swapping cardboard for as long as I can remember. We've developed one of those more lax trading styles.

From time to time, a package from him will just pop up in my mailbox without warning. And, along with that, I take it upon myself to "surprise" him with cards at times.

If this checklist is any indication, Adam pays attention to what I write around here.

Still, I don't usually devote full posts to topics like "knuckleballers" or "ageless wonders". I've mentioned most merely in passing on this blog. As a result, I know the people who pick up on those things are reading my writings with a close eye.

That, more than anything, is why I appreciate these "checklists" so much.

In order to get the most out of Adam's terrific trade package, I thought I'd go through and "check" off each slot this afternoon, one by one. 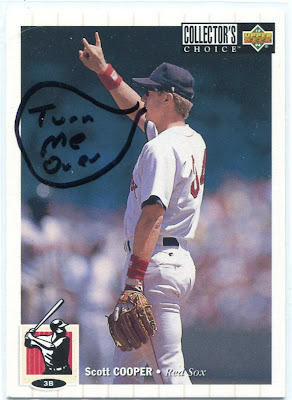 At first, I thought Adam might have made a mistake with the "bat barrel" category.

I didn't see any surefire barrel action during my initial dig through the cards.

The second time around, though, I noticed the comic book-like "speech bubble" jutting out of Scott Cooper's mouth. 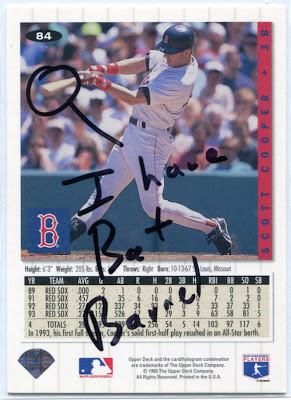 And there it was.

A bat barrel. One of the in-action variety, no less.

That just goes to show you, folks.

Always, always take an extra look through your trade packages.

You'll probably find something you missed the first time. 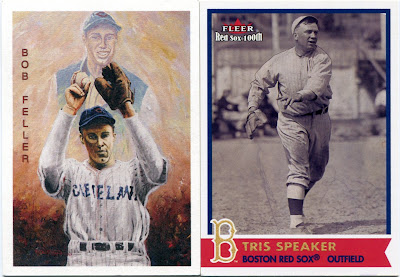 I've been stressing this since the earlier stages of my writings.

I collect Hall of Famers!

Any and all are welcome in my collection, but I've always placed an extra emphasis on the more "old-time" guys.

For me, the cutoff for that club is right around the 1950's. So, yes, Bob Feller is indeed an "old-time" HOFer. Tris Speaker is most definitely an "old-time" club member as well.

Now, most of the "Locklear Collection" inserts from the legendary Ted Williams set are absolute masterpieces. The ones of Lou Gehrig and Honus Wagner both made their way into my "Top 100".

I guess even artists have their "off" days. Something tells me that Mr. Locklear was going through one of those when he drew "Rapid Robert" there.

That looks more like something Salvador Dali would've created. 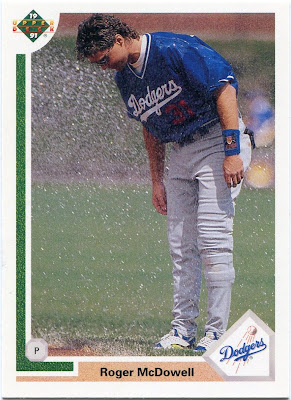 #3 -- Player Doing Something "Not Baseball"

I'm not exactly sure what Roger McDowell is engaging in here.

But it's pretty safe to assume that it has nothing to do with baseball activities. 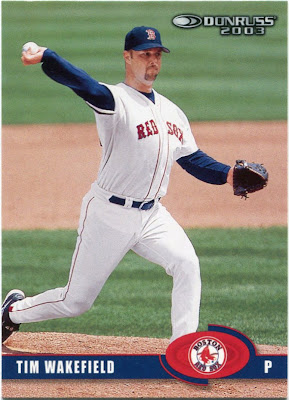 Given Adam's Red Sox ties, I was fairly certain that the "knuckler" in question would be "The Next Knuckler" host himself, Tim Wakefield.

My suspicions were correct.

While I collect a wide variety of knucklers these days, I've decided to move Mr. Wakefield into the upper tier of my binders. So, for anyone who wants to make another checklist for me in the future, a "Tim Wakefield" slot would be more than welcome.

Still, this won't be the last you see of him in today's post. 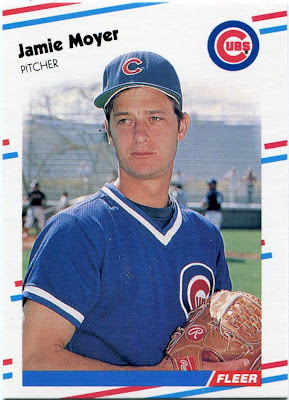 Although Tim Wakefield pitched into his age 45 season, I'm pretty sure he wasn't the "ageless wonder" that Adam referenced in his checklist.

No, that honor most definitely has to go to Jamie Moyer.

After all, the guy won a major league game at 49 with the Rockies last year. And he still hasn't officially retired.

Given all that, it's easy to forget that Moyer was once a promising young arm in the Cubs organization.

This '88 Fleer card pictures a 26 year-old Jamie Moyer. It's hard to believe that a guy that showed up in a 1988 checklist was still active in the game as of last season.

You are indeed an "ageless wonder", Mr. Moyer. 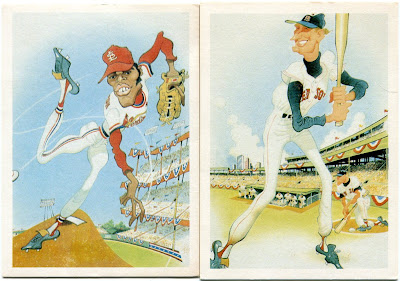 I have absolutely no information about these particular pieces.

Until they showed up in Adam's mailer, I'd never known of their existence. A happy surprise, given my newfound appreciation for cardboard from the cartoon side of the hobby.

See if you can guess who these two cartoonish figures are.

Did you guess Bob Gibson and Ted Williams?

I sure as heck didn't think the guy on the right was "The Splendid Splinter". 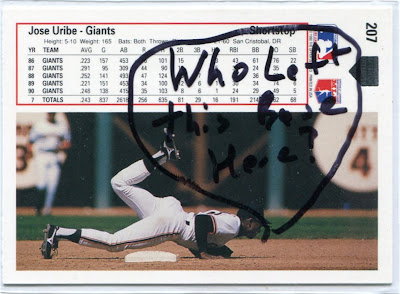 Adam sure went the extra mile with these.

He even created a few "personalized" cartoonish pieces for my collection.

In what looks to be a very Three Stooges-like tumble over the second base bag, I can fully imagine Jose Uribe wondering "Who left this base here?" after the fact. 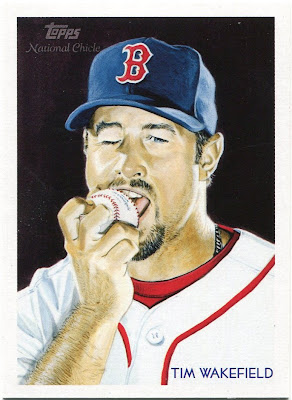 Given my love for everything "odd" in the hobby, I think it's easy to see why I had this National Chicle piece on my "Dime Box Dozen" list.

Tim Wakefield making a meal out of a baseball is more than worthy of a prime spot in my binders. 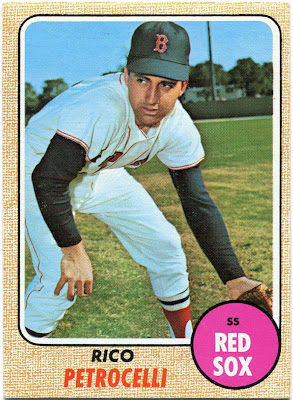 After all, the majority of my family's roots come from Italy.

Although I haven't yet decided whether or not I want to do it, I've toyed with the idea of starting a special collection devoted to the likes of Italian ballplayers.

As it stands, though, many guys with Italian roots already own quite a few spots in my binders.

Italian-American Sports Hall of Fame inductee Rico Petrocelli is one of the more notable inclusions.

Even though I already had a copy of his sweet '68 Topps card in my collection, the one Adam sent makes for a nice upgrade over the one I plucked from a flea market quarter box a couple years back.

Anything of a fellow "paisan" is welcome around here. 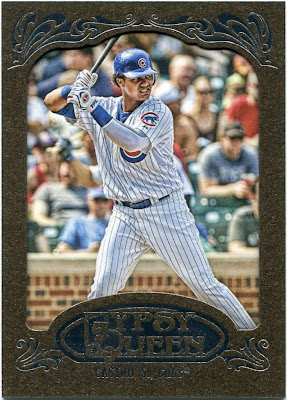 With the way my collection is structured, you could say that I collect every team in the bigs.

However, I'd be lying if I said I didn't place a little extra emphasis on my beloved Cubbies.

While I'm not a team collector by any means, seeing a few extra Cubs fall out of a trade package always puts a smile on my face. I got a little giddy once this parallel of Starlin Castro emerged from the mailer.

I can't say I much enjoy the Gypsy Queen brand, but I still believe these "framed paper" parallels are among the best things the hobby has going for it these days.

Anyone who owns one of these beauties can probably attest to that. 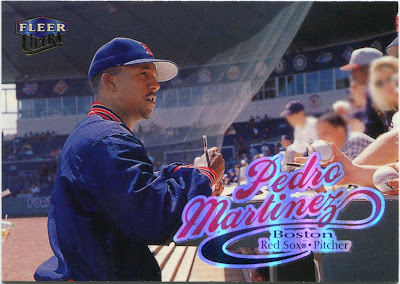 This has quickly become one of the better "autograph shots" in my collection.

After all, Pedro Martinez just isn't a guy you'd picture signing for fans all that often. 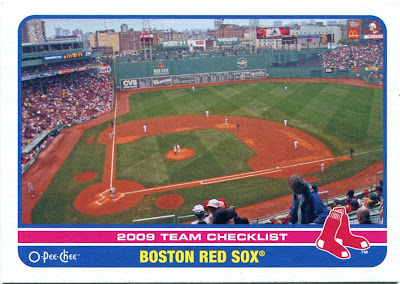 A number of the cards Adam included could've been placed under this category.

To me, though, Fenway Park is the absolute epitome of "cool" in the game of baseball.

Apart from that, I'll just let this one speak for itself. 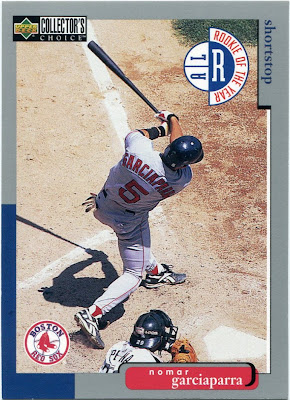 Collector's Choice has taught me a valuable lesson.

Any slight remark in the blogosphere can lead to a flood of cards arriving on your doorstep.

A few weeks ago, I made one tiny quip about Collector's Choice-brand cardboard being tough to find in my area.

They've been arriving in droves ever since then. Nearly every trade package I've received in the last month has included something from Collector's Choice in one way or another.

I only have one thing to say about that.

If cards like this Nomar are any indication, they'll always be welcome under this roof. 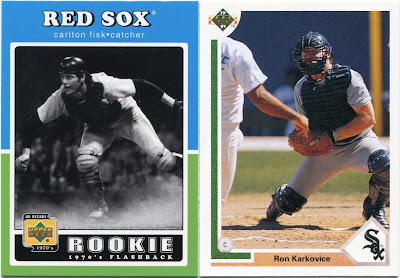 There's a term for some of the newer bloggers out there.

The acronym "PATP" is short for "play at the plate" here in the blogosphere. I'm sure you'll be seeing it quite a bit during your blogging travels.

Judging from the quick footnote Adam included next to the "PATP" slot, these wound up in my package purely by accident. This pair of "Sox" were my two favorites from the batch.

In actuality, the Fisk appears to be more of a "post-play at the plate" type of card. But, to me, those still fit in under the "PATP" category.

Plus, Mr. Fisk there was simply too awesome to not feature in this post.

I imagine that a trade package like this required a fair share of work on Adam's part. I know the types of cards he included in his "trade checklist" aren't all that plentiful and probably warranted a good deal of digging.

For that, Adam, I cannot thank you enough.

You've done your share in starting a new fad around here.
Posted by Nick at 4:59 PM

Hey Nick! I have been compiling some cards for you. Wanna get a trade going? I should be heading to the post office in a couple days. Please send me an email if you want to get something going. Thanks.

Interesting concept. It is also sort of a trade "receipt".

Ha! I did something similar in the excel document I use to keep track of trades. Yours is def the biggest list of stuff somebody collects.....

Check me out - I start trends!

The next trend I would like to start is everyone sending me Mantle rookie cards. Ok folks.....get to it.

The ballpark shots from 2009 OPC are some of the best shots I've seen on cards in quite a long time.