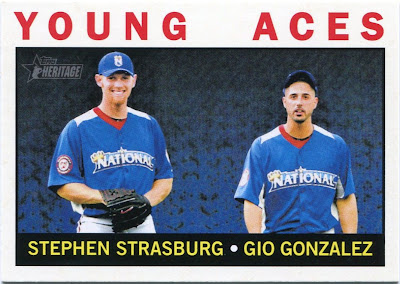 It's good to have a family that supports my hobby.

That's probably the understatement of the year.

For now, a decent chunk of my cardboard finances come from my parents. Due to my full-time school schedule and little-to-no prior work experience in today's market, I don't have a job at the moment.

While my parents have thankfully never spoiled or shoveled their hard-earned money onto me, they've been there to help out with my modest cardboard indulgences.

It's a good thing I don't collect uber-high end rookie autograph-patches, I guess.

Moreover, my parents have always been there for emotional support with my collection as well. I know I've mentioned this on many occasions throughout this blog's history, but it deserves mentioning again.

While there's a good chance I wouldn't be collecting today without their financial support, I'm fairly certain I would've dropped the hobby a long time ago had they not been there emotionally.

I've heard stories of parents who think their kids are "wasting" their money with baseball cards. Little do they know what kind of benefits such a wholesome hobby can have.

While my mom isn't the biggest sports fan, she has always been there to listen if I ever feel like going off on some kind of cardboard tangent. Given my lack of a card-collecting friend, it happens fairly often.

And, as far as my dad goes, he's the reason I'm a part of this hobby in the first place. As a member of the last generation of collectors during the mid '70s, he's been at my side for almost every single card show I've attended.

We've had many, many conversations about anything and everything cardboard.

And, sometimes, he just buys me cards without warning. Every so often, he'll purchase something on a whim during a trip to Target. He likes opening packs as much as I do.

Earlier in the week, he'd let me know that he'd pulled an awesome card out of a Heritage rack pack for me. We'll get to that one soon enough, but I thought I'd share the contents of this true father-son Heritage pack today.

I'm not usually all that partial to the "combo" cards that Heritage has to offer. I'll admit, though, that "Young Aces" piece at the top of this post is pretty neat.

Given that blue is my favorite color, I guess that makes sense. 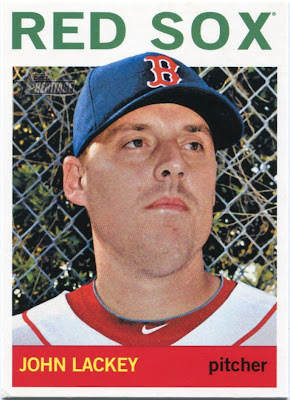 I'm almost positive that this shot was a Topps holdover from 2012.

From the looks of it, John Lackey was a part of last year's Red Sox "chain link gang".

Since he missed the entire 2012 season due to Tommy John surgery, it makes sense that Topps would exclude him from their Heritage release that year.

From what I've heard, though, Lackey is back and ready to go for 2013. As a result, Topps granted him a spot in this year's Heritage checklist.

I wish Mr. Lackey the best this upcoming season. 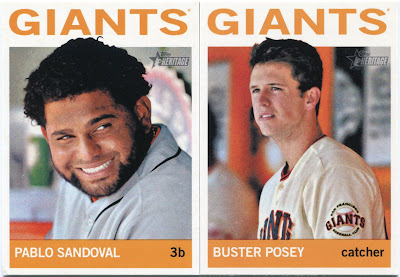 Next to Tim Lincecum, these are probably my two favorite Giants at the moment.

And my dad pulled both of them from a single rack pack.

To top it off, the Posey is a short-print. If you're keeping track at home, that's one more than I pulled during my initial two rack packs of Heritage.

I'm starting to think I should leave my dad in charge of any future Heritage breaks. 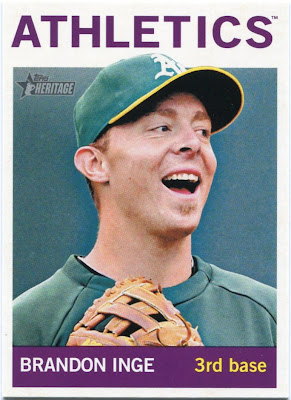 Although he only spent a half-year with the franchise, Brandon Inge is quickly becoming one of the highlights of my A's binder.

He's already been featured on a surefire "Card of the Year" candidate in Flagship. And, although this Heritage shot may be a little quirky, I still can't help but love it.

Brandon Inge just seems like a fun guy to be around.

In the end, that's all I could ever ask from a ballplayer.

It's a big reason I'm looking forward to netting some of this year's "Ballpark Fun" inserts from Opening Day.

After all, baseball is supposed to be fun. 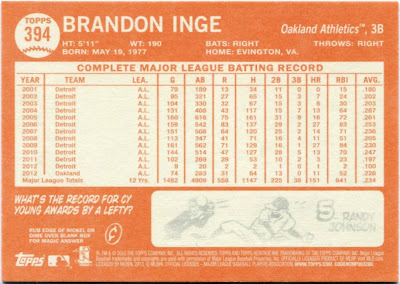 After giving me the contents of this particular Heritage rack pack, my dad had but one request.

He wanted me to scratch off one of this year's trivia questions, a quality that stays true to the original '64 design.

Although you can clearly see the answers by tilting the card into light at the right angle, I was happy to oblige.

To be honest, I didn't get this one right. I guessed Hall of Famer Steve Carlton. "Lefty" actually won four Cy Youngs during his career, one short of Randy Johnson's five. 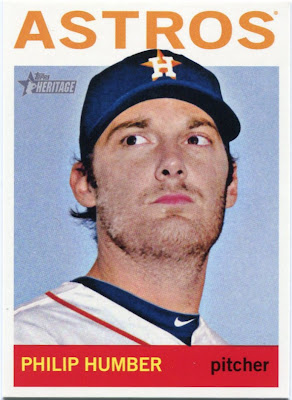 As far as the base cards go, this was probably the most interesting "find" of the rack pack.

After all, Philip Humber had probably the most roller-coaster year in the majors last season.

I'll bet most of you remember his perfect game on April 21st against the Mariners. An afternoon game that I ashamedly missed, for some reason. I'll never forgive myself for that.

After forever granting himself a spot in baseball's record books, Humber really fell off the map. Injuries and subpar pitching caused him to finish the season with a 5-5 record and a bloated 6.44 ERA.

The White Sox put him on waivers this offseason, where he was claimed by the Astros, arguably the worst team in the bigs.

While I like the move by Houston, I don't think you'll see Humber's name heard too often in 2013.

Base cards are great, but let's take a look at that "awesome" card I referenced earlier. 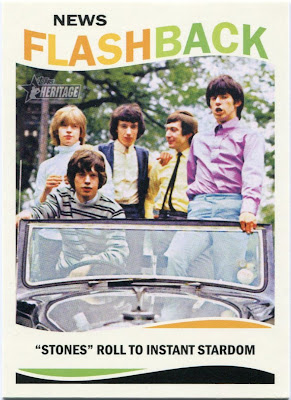 I guess it's appropriate that my dad pulled this one.

He's the biggest music fan I've ever met, by far. I've acquired most of my musical tastes through him over the years.

As far as the "British Invasion" bands go, I've always had much more of a preference for the Beatles. However, I'm a fairly big Stones fan as well. "Jumpin' Jack Flash" and "Get Off of My Cloud" are two of my personal favorites.

Still, I can't help but wonder why Topps chose a George-less Beatles photo for their "News Flashbacks" insert, yet managed to squeeze all five of the original Stones into this one.

Nevertheless, I'm extremely happy to have this one in my hands. It has quickly taken its place as one of the cornerstones of my non-baseball collection.

And it wouldn't have been possible without my dad's support.

Although I'm not yet a parent, I feel confident in saying this.

To all parents or future parents out there, do your best support your kid's hobby. Whether it be baseball cards or whatever else, it can pay huge dividends down the road.

I speak from first-hand experience.
Posted by Nick at 2:59 PM

Cool post. My parents always bought me packs of cards. My dad even loaned me money, so that I could invest it in cardboard. I never made anything from that investment... which I think was one of those "teachable moments". Although... he never said "I told you so".

Nice post,buddy....thanks....but little do you know I plan on moving in with you when I'm old!....hahahaha!!

Sadly, it doesn't look like Inge will make it on to the Pirate's roster this spring.....I'll miss him.

That Stones card is sweeeeet! I am actually named after Michael "Mick" Jaeger. Their music was a big part of my upbringing and gave me the rebel spirit that I still have today.