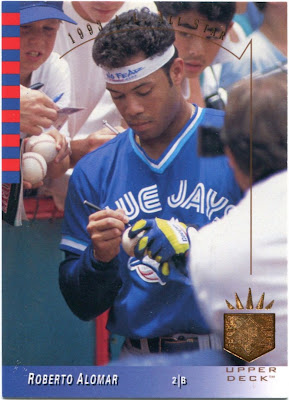 When I collected hockey cards, mailing a package to Canada was a fairly regular occurrence.

Most of my fellow hockey trading partners at the time were in fact from north of the border. In fact, I probably sent more packages to Canada than the U.S. during my earlier, hockey-based forum days.

Once I made the switch to baseball cards, my mailings to Canada became way more sparse.

These days, I rarely send anything to Canada. Although I know they're out there, I haven't made trades with many fellow Canadian bloggers yet.

Thus far, the only one I've dealt with is Douglas, author of the fantastic blog "Sportscards from the Dollar Store".

I recently received an extra-special assortment of items from my fellow Canadian blogger. As you'll see the main attraction wasn't even card-related.

Plus, Douglas has informed me that another envelope containing a "Dime Box Dozen" need of mine is on the way, so keep an eye out for that in the coming days around here.

For now, though, I'm certainly happy to have this "autograph" shot of HOFer Roberto Alomar in my collection.

Part of me wonders what actually ended up happening to the memorabilia that has been featured on my myriad of "autograph" cards.

The skeptic in me can't help but think that quite a few of the baseballs and photos on these types of shots ended up later being sold for pure profit. I sure hope I'm wrong about that.

I hope the ball that Alomar is signing here is still a part of someone's treasured collection. 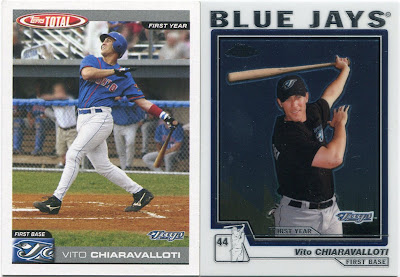 Before it arrived on my doorstep, Douglas noted that he'd included a couple cards featuring perhaps "the most Italian name ever" into my mailer.

I'd always thought that Rocco Baldelli was the "king" of that department.

I think Mr. Vito Chiaravalloti has him beat. I'd heard the name before this package arrived, but these are the first cards of his in my collection.

From the looks of it, I doubt any card companies were planning to produce cards of Chiaravalloti during the '04 season. Topps Total even photoshopped a Blue Jays jersey onto him for the occasion.

I guess posting a .351 average in your first minor league season causes that kind of thing to happen.

Sadly, he never ended up sniffing the show. He struggled mightily after his big "rookie" year, never making it above Double-A during his minor league career.

Nevertheless, this "paisan" will always be welcome in my collection. 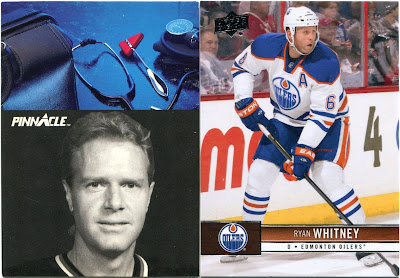 I try not to be a "thief" when it comes to other people's collection and/or organizational ideas.

In the case of Douglas, though, I may have to break that rule.

Quite a few of his writings have mentioned his hallowed "birthday binder", one that contains the likes of athletes born on his birthday. From what I understand, one of my own "binder guys" in Damaso Marte shares an exact birthday with Douglas.

Although I haven't committed to it yet, I've often toyed with the idea of doing that with my own collection. As it stands, Josh Reddick, Miguel Batista, and Dave Stewart are my only binder/birthday combos.

A specially-made "birthday binder" would allow me to recognize non-binder guys like Chris Stewart and Brad Kilby in my collection as well.

With the fantastic array of fellow February 19th hockey "birthday boys" such as "Doctor" Randy Gregg and Ryan Whitney, I may extend the olive branch to players from other sports as well.

So, if you ever see me mention a "birthday binder" in the future, know that it wasn't my idea.

Full credit goes to Douglas on that one. 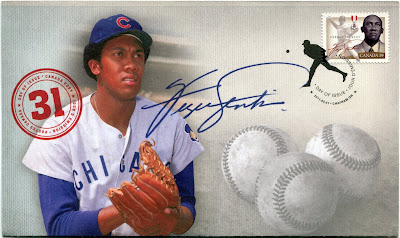 As I mentioned earlier, the "highlight" of this package wasn't related to cardboard.

Given my longtime Cubs fandom, I'm absolutely ecstatic to have this magnificent display piece in my collection.

Fergie Jenkins has always been one of my all-time favorite Cubbies. I even had the good fortune to meet him at an autograph signing as a kid.

Apparently, these "First Day Covers" were issued by the Canadian Postal Service as part of Black History Month in 2011. (I'm not even the first blogger to post about them.)

Given that "Fergie" was born in Ontario, that makes sense. He's probably the most well-known ballplayer to come from north of the border.

I've always found packages from Canada to be kind of special. Knowing that the mailer in your hands crossed through a whole other country is pretty darn neat.

Plus, if what I received here is any indication, Canadians like Douglas can put together a mean trade package.

Nice Fergie Day of Issue cover. As far as "birthday" collection for me I didn't think there were too many Baseball April Fourthers but lets see there is:
Tris Speaker
Gil Hodges
Jim Fregosi
Plus a couple of other not as well known guys (and a football player or two). A couple of my fave Birthday buddies are actors Anthony "Norman Bates" Perkins and Nancy "Facts of Life" McKeon. Some years back a source or two had Marilu "Taxi" Henner being born on April 4th but she's an April 6th babe.

My birthday has to be one of the weakest of all days. There are two HOFers, but they are 2 of the weakest HOFers in my opinion, Joe Cronin and Rick Ferrell (possibly THE weakest HOFer). Both of them were in the "few cards available" era (1920-1948) between the tobacco cards and the Bowman/Topps era

Of the people with cards to collect, the best pitcher is former Met Sid Fernandez, which is kind of sad until you see the hitters. The best hitters are Glenn Beckert and Jose Valentin. I think that is the first time those names and best hitters were ever in the same sentence. A bonus guy that you will probably appreciate is Tanyon Sturtze, but when he is the 4th best modern player that shares a birthday with you...it ain't a strong crowd.

There are some active players, but Casey McGehee, Paul Janish, and Nolan Reimold probably are never going to be anything other than role players.

I'm content with the Monopoly. I do wish Upper Deck was in the mix, but Topps really is doing a good job.

I've had an absolute blast collecting Topps Baseball over the past few years with very few complaints.

I just hope they don't get too lazy, but by the sounds of it they want to continue to innovate.