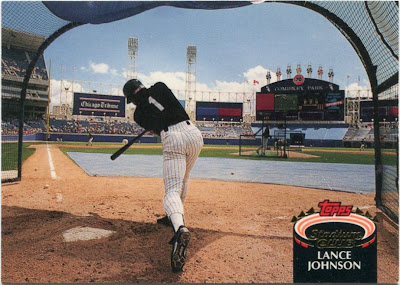 Forgive me, but it happened again.

I fell victim to yet another "impulse buy" last week.

Granted, this latest purchase was a much smaller than most of my others in the past. Given my upcoming card show/Vegas expenses, I wasn't able to spend too much.

Thankfully, some loose change I'd accumulated over the past month helped fund this latest batch of cardboard.

In actuality, tonight's impulse buy was inspired by the blogosphere.

More specifically, it came courtesy of the Lance Johnson card you see above.

Once I saw it pop up on another blog, I knew it was a piece I absolutely had to have. After an extremely short tenure on my "Dime Box Dozen" list, I decided I couldn't wait any longer.

It needed to be in my collection. As soon as humanly possible.

So, off to Sportlots I went. As is the case with most commons over there, I was able to pick this one up for a paltry 18 cents.

Judging by the staggering beauty of this piece, I'd rank it as possibly the best 18 cents I've ever spent.

I've been to Comiskey Park on quite a few occasions during my baseball life. From past experience, I can attest to the amount of mystique that the ballpark holds.

Still, this amazing "batting cage" shot gave me a perspective on the place that I'd never seen before. Although I've never been a fan of fireworks, I'd put the stadium's scoreboard up against any other in the bigs.

What I love most about this one, however, is the fact that you can clearly see baseballs scattered across the baseline and infield grass, the product of a long batting practice session.

While this was far and away my favorite piece of this "impulse buy", I did manage to pick up a few other little "gems" along the way as well. 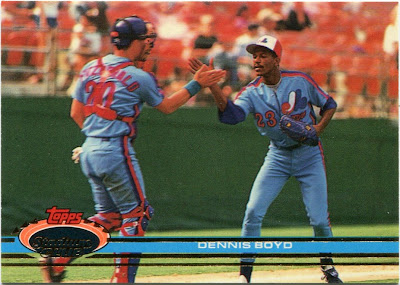 As it turns out, the '82 Fleer Bill Lee I featured earlier wasn't the only Expo card from this "impulse buy".

While probably not as awe-inspiring as the Lance Johnson, this one of "Oil Can" Boyd certainly goes a long way in showcasing Stadium Club's terrific knack for photography back in the day.

Postgame handshakes have rarely been featured in a greater light. 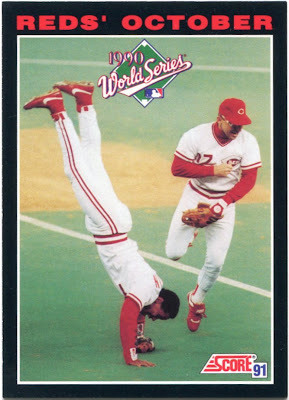 For a long time, I thought Ozzie Smith had the only "backflip" cards in existence.

Turns out I was wrong.

All it took was another 18 cents to save this overproduction-era "gem" from an otherwise uneventful life.

Here, we see then-Reds shortstop and HOFer Barry Larkin literally "flipping out" over the Reds' NLCS victory in 1990. (With the bespectacled Chris Sabo celebrating alongside.)

The back features a nice night shot of the Reds celebrating their World Series victory, but the front is the real attraction in my eyes.

After all, how often do you get to see backflip-themed baseball cards? 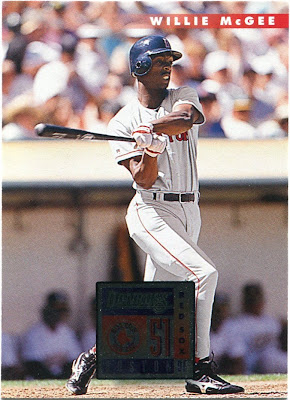 While my overproduction-era pickups were certainly noteworthy, this latest "impulse buy" managed to add a few mid '90s pieces to my collection as well.

The previous cards of Lance Johnson, "Oil Can" Boyd, and Barry Larkin all caught my eye due to the stunning photography featured on them. Same goes for the pair of cards you'll see after this one.

Mr. McGee here was the only exception. If the horrid design of 1996 Donruss is any indication, photography didn't play into my decision to buy this particular piece.

As you might guess, the basis behind this purchase was strictly uniform-based.

It's the only card I've seen that features Willie McGee in a Red Sox jersey.

For a long time, his tenure in Boston had completely flown under my radar. Only recently did I learn of his abbreviated 67-game stint with the Red Sox in '95.

When it comes to matters of uniform unfamiliarity, I can look past awful and intrusive designs. 1996 Donruss or not, this was a card that needed to be in my Boston binder.

And, speaking of Red Sox... 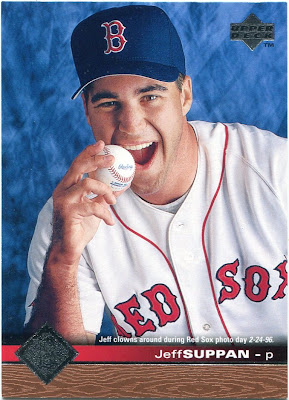 Here's possible future-Congressman Jeff Suppan chomping down on a baseball.

I bet you weren't ready for that, now, were you?

My hopelessly wandering mind can't help but wonder if Topps stole this idea from Upper Deck in 2010.

I sure don't think it's a coincidence. 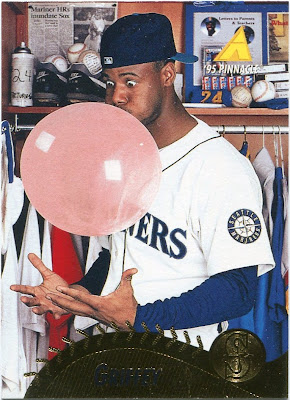 Each of the previous five cards I've featured in this post carried the standard 18-cent price tag.

This one, however, required me to dig a little deeper into my pockets.

I had to shell out a whole quarter for Mr. Griffey here.

A small price to pay for such cardboard greatness. Although I've personally never been able to get the hang of blowing a bubble, this card has been a desperate need of mine for a while now.

It's close, but I think he has Kurt Bevacqua beat. I'd have to leave it up to the judges, but "Junior" looks to be the new "bubble gum champ" of cardboard.

Once I managed to get past the bubble, though, I noticed quite a few interesting aspects of Griffey's locker. Spray cans, autographed baseballs, Nike shoes, newspaper clippings...he has the works in there.

I think I even see a few hopelessly-outdated VHS tapes on the right-hand side there.

Personally, I believe I made a fairly budget-friendly "impulse buy" this time around. It's a perfect example of that "little of everything" attitude I take with my collection.

The more variety, the better.

That's the motto around here.
Posted by Nick at 6:08 PM

I hope Suppan does make a run for congress. He runs a pretty good sports bar by my house. That has to count for something.

The locker contents of that Griffey are the coolest part of that card.

And that is the greatest Lance Johnson card I have ever seen....

McGee has one other Red Sox card that I am aware of in 1995 Upper Deck.

Nick, I also had wanted that McGee card for years - I finally picked it up a couple of years ago. The card that Metallattorney refers to is one that was available via sending in one of 5 'Trade' cards to Upper Deck in 1995 - each card netted a return of 9 update cards, with 45 in total. Pretty hard to find, these days!