Back to my blogging roots, Pt. 3 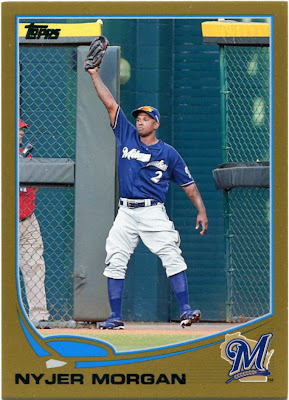 Thankfully, though, I've stuck with my regimen to help clear the backlog a bit. I try not to let too much time elapse between actually receiving the cards and posting them.

Given my teaching aspirations, I figure that kind of "system" should work well when it comes to grading papers and essays and such.

I don't much like having to wait more than a couple weeks to get a test back at school. In a lot of ways, I've taken a similar take on creating trade posts.

I figure it's fair to the sender to write the things up in a timely manner.

And, of course, I absolutely love writing trade posts on a consistent basis.

This afternoon's post will be the third and final installment of the recent "back to my blogging roots" mini-series that I've featured on the blog this week.

I recently inquired about this very Nyjer Morgan gold parallel from a fellow blogger and "hero" of mine. He goes by Robert, but you might know him as the mind behind the awesome blog "$30 A Week Habit".

Now, I'll get to why Robert is indeed a blogging hero of mine in a bit. For now, though, let's focus on Nyjer Morgan.

For whatever reason, any "T-Plush" cards that people pull seem to eventually wind up in my hands. Between his base, inserts, and parallels, I somehow managed to add seventeen of his 2012 cards to my Brewers binder last year.

After his Flagship base, red-bordered, and blue-bordered issues, this gold parallel is already the fourth 2013 card of his I've acquired.

The guy follows me. 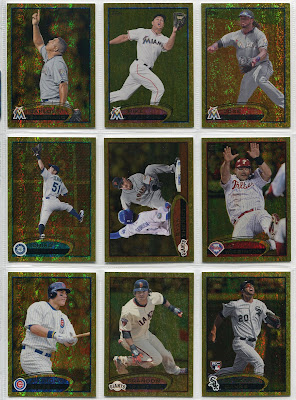 I've recently taken up a new habit when it comes to my blogging tactics.

Before, I had a tendency to say, "So-and-so sent me a bunch of cards from whatever set, but here are one or two of my favorites."

However, if someone goes that far out of their way to send me a batch of great cards from a particular release, shouldn't I try to to showcase as many as possible on the blog?

If so, what better way to do that than with a trusty old nine-pocket page?

They're the basis for my collection, after all.

Yes, Robert did indeed send me a fantastic group of 2012 sparklies. But, instead of selecting one or two for your viewing pleasure, I thought I'd just show you nine of them.

By the way, Mr. Rizzo, thanks to that game-winning hit you had for the "underdog" Team Italia last afternoon, you're one of my new favorite ballplayers. 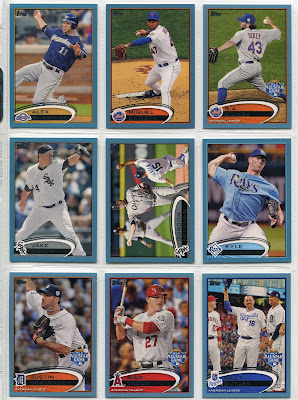 Robert also sent me a terrific batch of blue-bordered 2012 goodness as well.

Again, you'll be seeing most of them courtesy of a nine-pocket page.

In preparation for this trade, Robert did something that reminded me of just how much more awesome this place is in relation to the forums.

He actually took the time to type up lists of his extra 2012 sparklies and blue-borders for me, saying that he wanted to "expand" the trade a little more. He let me have my pick from his extras.

In other words, Robert was basically saying, "Please, let me send you more cards than you'd originally asked for."

This is the place to be.

It beats the absolute heck out of the forums. 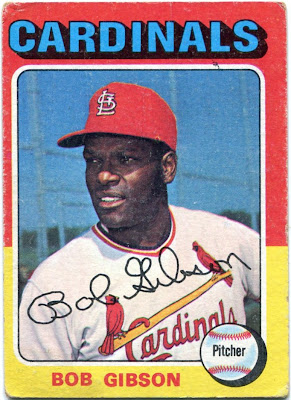 While gold sparkles and blue borders are terrific, this was the real coup of the trade for me.

I've wanted this card for years. Seeing as how it's a 1975 Topps "sunset" card of one of the greatest pitchers the game has ever seen, this Gibson had long been one of the more gaping holes in my collection.

Interestingly, all it took was an innocent little comment on a blog to finally track down my much-awaited cardboard treasure.

Robert built a terrific post around this card last month. At the time, I noted the fact that it was indeed one of my most wanted cards in the comments of that very post. And that was that.

Soon afterwards, I received a surprise email from Robert. He informed me that the Gibson was actually a double in his collection, and that he'd be more than willing to send me his extra copy if I didn't mind the condition issues on it.

Needless to say, I could care less about condition issues when it comes to a gem like this.

I'm just happy to finally have it in my collection after all these years.

Obviously, Robert's generosity is one of the reasons he played a big role in my "blogging roots". And, yes, his was one of the first blogs I read on a regular basis upon my entry into the blogosphere.

However, the most definitive reason as to why he's one of my blogging heroes is the fact that we were both pretty much "saved" from lives on the forums.

In fact, he played a bit of a role in "saving" me.

I actually first ran into Robert on my old forum. Just after the creation of this blog, I'd posted a thread that asked for comments or opinions on my writings over there.

Looking back, I can't even remember what anyone even said after I posted that.

Although he'd largely already given up the forum life at that point, Robert was quick to give me a little encouragement to stick with the blogging thing.

At the time, I had no idea of his blogosphere ties.

These days, however, I'm quick to deem Robert a surefire "friend of the blog". On top of that, he's a person from whom I've drawn inspiration on many occasions in my blogging life.

Little did I know that a simple, encouraging reply on a trading forum thread would play such a large role in my collecting life.

Amazingly, that was over a year ago.

I guess time really does fly when you're having fun.
Posted by Nick at 1:30 PM