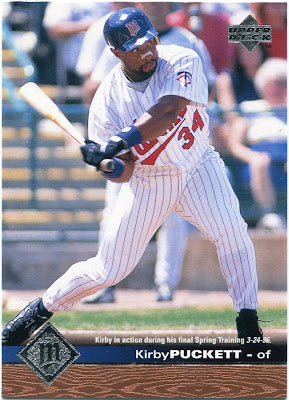 The hobby can be a fickle thing sometimes.

One minute, it's love at first sight. For whatever reason, I've latched onto many cardboard innovations from day one of my collecting career.

I've loved Topps Heritage from the beginning. On top of that, I've always had a special place in my binders for "pitchers at the plate" cards as well.

Then again, some of those "love at first sight" innovations only ended up breaking my heart in the end. Unfortunately, A&G is starting to slide into this category. The same goes for my long-lost love for the memorabilia market.

Sometimes, though, it takes us a while to truly recognize how great some aspects of this hobby truly are. By the time that realization usually comes, however, the innovations are long gone.

That's why I'm calling for a cardboard renaissance, of sorts.

There are lots of bits and pieces of the current hobby I could do without right now, but that's for another post. On a similar note, however, there are quite a few "rebirths" I'd like to see in the world of cardboard.

Perhaps unsurprisingly, the rebirths I'd like to see are more or less ones that went under-the-radar in their time.

Take the "dated" concept behind Upper Deck's 1996 release. I rarely see these things mentioned anymore. Yet, although I wasn't too big on them during my pre-blogger days, I've come to have a deep appreciation for the set recently.

A large part of the blogosphere seems to enjoy the practice of "dating" baseball cards to a specific moment in time. Although I can't say I have much experience in the field, you can count me among that group as well.

In 1996, though, Upper Deck did all the work for the collector. Almost all the cards I've seen from the set can indeed be tracked to a specific moment of history.

Given that Kirby Puckett retired during spring training in '96, this particular piece is one of my personal favorites. It's kind of a "post-sunset" card, if you will.

True, Upper Deck isn't in the hobby anymore. I don't know about you, though, but I'd love to see Topps crank out an "all-dated" set one of these days.

Let it replace Opening Day or Chrome or one of those types of sets.

I wouldn't miss those one bit. 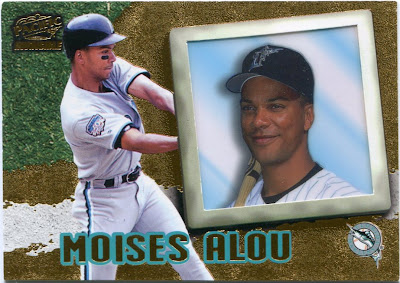 I've accepted my minority stance in this regard.

I'm probably the only collector who enjoys these "gimmicky" see-through pieces.

See, if you flip over this coveted piece of my Moises Alou collection... 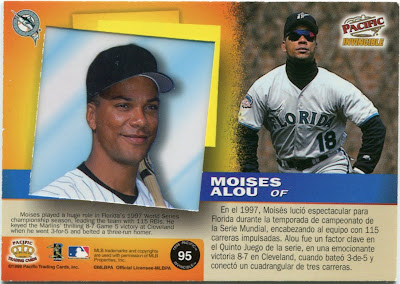 ...you have a flipped image of the very same shot!

These little types of quirky innovations are what made Pacific one of the better brands in hobby history. But, again, that's probably for another post.

So, yes, I'd definitely like to see Topps re-introduce some sort of see-through set to the hobby. I personally think they'd work best in insert form.

And, yes, I realize I'm probably the only collector on Earth who cares about them.

Don't hold that against me. 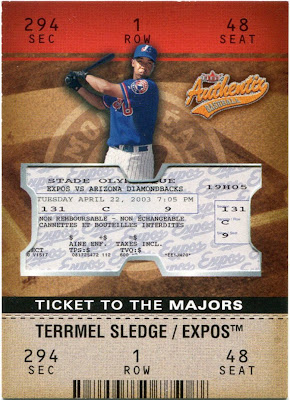 To Topps' credit, they did actually try and revive the whole "Ticket to Stardom" concept a few years ago.

You mean you don't remember?

Join the club. I've pretty much blocked that ill-fated set from my memory. Looking back, that set didn't have much to do with the whole "ticket" concept at all.

However, I do still think we should give these things another shot. Make them into strictly an insert set, though. And include little ticket stubs into each subject, like Fleer did with Terrmel Sledge here.

Personally, I could care less about the whole "prospecting" realm of things nowadays. If Topps were to introduce this concept to the big "rookies" of the game today, I might actually take a little interest to them.

Until then, though, I'll stick to the dime boxes. 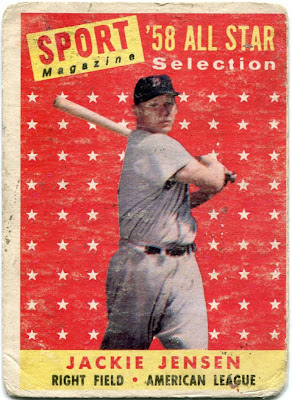 This last "renaissance" isn't a new idea, by any means.

I've already seen a few bloggers discuss it, most recently by Mr. Owl himself.

As a young collector, I didn't much care about the special "All-Star" cards that Topps included within each set. I'm not sure why, but it just didn't mean much to me at the time.

Although Topps had been doing it since the likes of Jackie Jensen in 1958, I could never quite get on board with the concept.

Thankfully, though, I've come around since then. I'm a big All-Star fan now.

However, I still think it's an aspect of the hobby that could benefit from the old-school way of thinking. 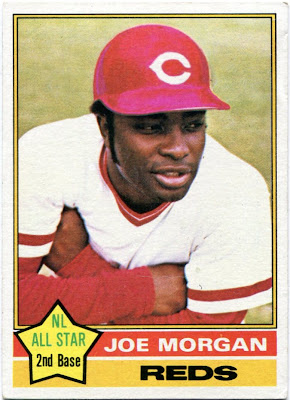 While I do like 'em, I feel that the hallowed All-Star issues just take up too much space these days.

Due to their midsummer classic appearances, guys like Melky Cabrera and Justin Verlander received multiple cards in last year's Topps checklist. One regular card, accompanied by a separate All-Star card.

Just produce one, single "ultimate" card of the All-Stars, as they did for a brief time in the late '70s and early '80s.

Joe Morgan here had one card in the 1976 Topps checklist. As soon as young collectors saw that All-Star designation, though, they knew they had a special piece on their hands.

Unfortunately, All-Star cards are starting to feel more and more like filler these days.

And, even worse, they're taking up valuable checklist space that could be better used for some of the more "unsung heroes" of the game.

That being said, though, I'm fairly at ease with where the hobby is these days. It's far from perfect, but it's still captivating enough to keep me on board for the foreseeable future.

Still, I think the world of cardboard could benefit from a bit of a "renaissance".

If history has taught us anything, I think it'd be quite the game-changer.
Posted by Nick at 6:58 PM

You are definatly not the only one that likes the see through cards.

I collected really really heavily in the mid 90s and Pacific as a whole sucked. They did however put out that one really good set every year that had see through cards and cool parallels. But for every great set they produced they made another 19 offereings that were horrid.