Putting the band back together: An update 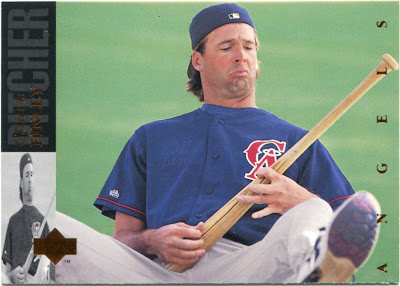 I try not to feature "repeat" cards on the blog too often.

Unless absolutely necessary, I do my best to make sure that every single card I showcase is new to the "Dime Boxes" universe.

As far as tonight's post goes, though, you can throw that little "rule" out the window.

Each of the cards I'll be featuring here have made previous appearances on the blog.

As many of you might know, I've been chasing musically-themed cards for my collection lately. It's my little attempt at putting a sort of "cardboard band" together.

The "original" trio of band members came courtesy of an epic three-card purchase back in November.

For tonight's post, I thought I'd update the other "band" pieces I've acquired since then, featuring them all in a single, solitary post.

It's like a little "jam session", if you will.

I'm not sure whether Chuck Finley should be invited, though.

Does playing air guitar with a baseball bat qualify him to be in the band?

I don't know. I guess he might be able to add a little charisma to the group.

You might want to learn a couple chords on an actual guitar, though. 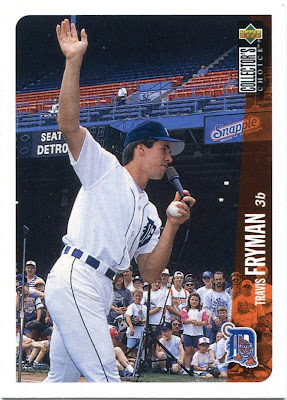 Despite the fact that it looks like karaoke night at Tiger Stadium, I can't verify that he's actually singing here.

He may simply be swaying uncontrollably.

You'll probably have to handle backing vocals, though.

Roy Lee Jackson pretty much has those covered. 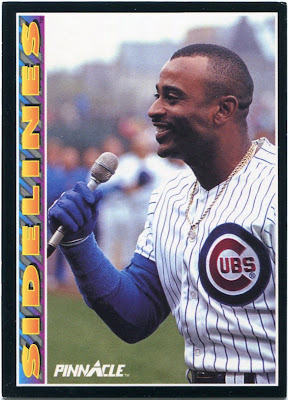 Actually, Jackson may have to share lead vocal duties.

Having sung the National Anthem on multiple occasions (including Opening Day at Wrigley in '91), Dwight Smith has a fairly solid singing background as well.

I'd bet the two of them could get some sharp harmonies going. 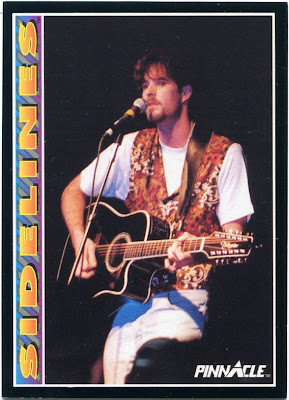 Pinnacle produced yet another band member with their "Sidelines" subset in 1992.

"Black Jack" McDowell here is quite the accomplished musician, having played in multiple groups over the past couple decades.

While he's wielding an absurdly nice 12-string guitar there, McDowell is probably going to have to get rid of that vest upon joining the band.

That thing would probably scare the audience away. 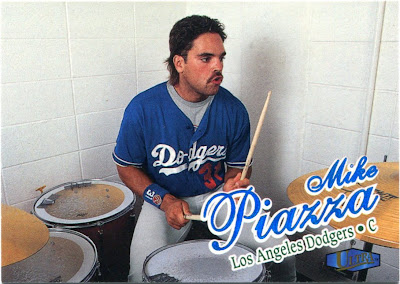 With Mr. Piazza here, the band is up to a whopping eight musicians.

I'm usually not too fond of groups who have more than five members or so, but I'll make an exception for this one. It'll be like the "E Street Band" of cardboard.

Looks like the roadies are going to have to lug two different drum sets onto the stage for each gig. Randy Johnson and Piazza will be sharing duties on the ol' bongos, a la The Grateful Dead.

And, although he's not an "official" member due to his non-baseball status, we shouldn't forget the bass-playing abilities of late NBA star Wayman Tisdale.

While I'm sure there are still a few "musical" pieces out there for me to chase, I'd say I've done a pretty good job of hunting down most of these types of cards thus far.

More appropriately, I should say, my fellow bloggers have done an awesome job of hunting these down for me. Out of the cards in this post, all but the Finley came courtesy of a few generous trade packages.

The "band" still doesn't have any "original" songs to play. They don't even have a catchy name yet, for that matter.

But they're off to a good start.

Let's just hope they can keep their heads on straight.

Once fame hits in the music business, anything can happen.
Posted by Nick at 6:55 PM

I featured that one in my original "band" post, Bo, it's arguably my favorite out of these musically-themed cards.