The day before Vegas: Interlude 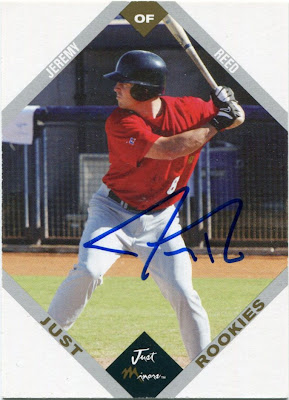 This is kind of a new thing for my card show write-ups.

Although I was planning to unveil the first of my all-vintage posts today, I didn't end up having the time  to do so.

Instead, I thought I'd bring you an "intermission" post of sorts. Tonight, I'll show a few more of my discount bin finds. On top of that, you'll get a brief glimpse into some of the vintage to come.

For starters, I did indeed buy that autograph card you see above. It's probably been years since I've taken one of those things home from a card show.

Hear me out on this one, though. I had a pretty good excuse as to why I decided to purchase a minor league autograph issue of journeyman Jeremy Reed.

I found it in a dime box.

While it's not the first time that's happened, it was still a shock to me. The fact that Reed is one of my more obscure "binder guys" was icing on the cake.

I have yet to find a dime bin jersey card, though.

Still, I wouldn't be surprised at all if one awaits me in the future. 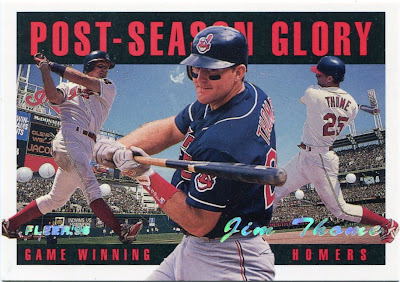 As I mentioned in my initial card show post, one of the dime boxes I dug through was strangely Indians-centric.

Because of that, I ended up taking home more Tribe cards than any other franchise.

This stunning Fleer insert of Mr. Thome was one of the better of the bunch. 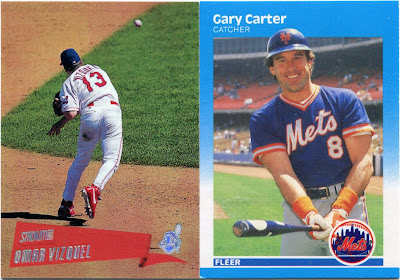 Omar Vizquel will go down as one of the greatest fielders of all-time. That Stadium Club shot shows (what I believe to be) the future HOFer working his craft.

I dug up a few "bat barrel" cards from the discount bins, but none were better than that one of "The Kid".

Although I've only had that one for a few days, it's already one of the centerpieces of my Carter collection. 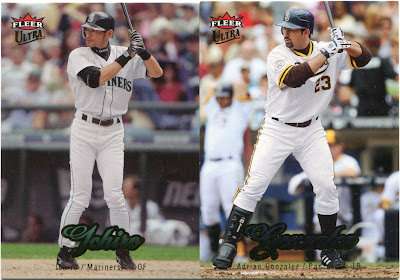 These are prime examples of a great card show "tip" I've picked up over the years.

Always, always give your finds a good look-over after the fact.

Not only is it a ton of fun, but you might find something you missed the first time during the process.

I plucked these from a dime box simply because I thought they'd make for fine additions to my Ichiro and Adrian Gonzalez collections.

As I was rehashing my card show glories for about the fifth time yesterday, I decided to flip them over.

To my surprise, I found that each of the small stack of '07 Ultra cards I'd purchased were of the "hobby" variety, individually numbered out of 999 copies. It's the first time I've ever found a numbered Ichiro out of a dime box. 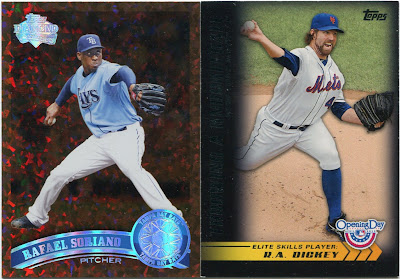 Although you'd never know it from the awful scan-allergic foil on the left of that insert, R.A. Dickey's "Elite Skills" insert highlights his superb knuckleball ability.


And, unlike the few times I ordered a beer in Vegas, I didn't get carded in the process of purchasing that Soriano "liquorfractor".

I just handed over the quarter and went on my way. 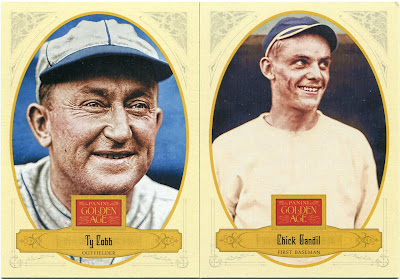 I hope you're not sick of my Panini Golden Age babble yet.

Because here's a couple more.

It's a great set, plain and simple. 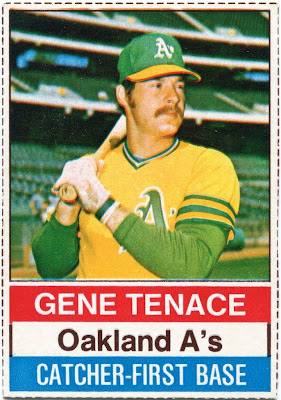 Well, the time has come to showcase a few vintage pieces that didn't quite "make the cut" for my final two card show posts.

I'd love to show off every single vintage card I picked out during the course of Saturday's show, but that just isn't in the cards time-wise.

Still, I picked out a few of the awesome "also-rans" that I felt should've been recognized nevertheless.

You'll be viewing quite a few Hostess cards in the posts to come. This 50-cent piece of "Swingin' A" Gene Tenace is just a brief taste of the candy-coated side of cardboard you'll soon see.

If I had to pick, I think '76 would go at the top of my year-by-year Hostess rankings.

It's one of the more patriotic sets you'll find. 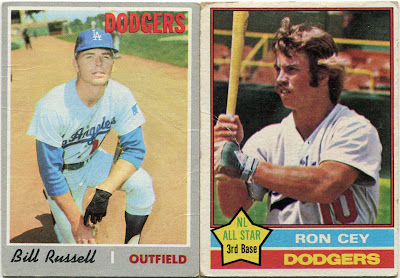 These should appease the many Dodger fans in the blogosphere for now.

Although I'd never had much interest in acquiring his cardboard before the fact, I somehow found myself scooping up all the discounted Bill Russell cards I could on Saturday.

Surprisingly, I managed to find his 1970 Topps rookie out of a terrific 3/$1 box.

The Cey was the lone vintage piece I unearthed from that Golden Age-based dime box I talked about on Thursday.

Thanks to the efforts of Mr. Night Owl, I've decided to devote more time and energy to my collection of "The Penguin" in recent months. His '76 Topps issue is now the oldest card of his in my binders. 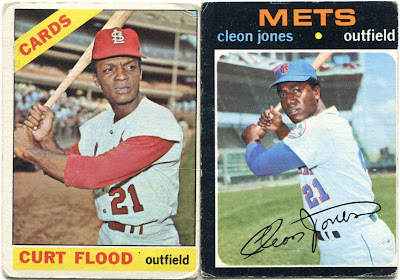 You'll be hearing a lot more about an awesome 12/$5 vintage bin I discovered in the coming days, but here's a couple that I had to leave out of the fun.

The only reason that '66 Flood didn't make the cut was because I found an even better card of his from the very same discount bin, which you'll see in the future.

Still, that '66 Topps piece is one bad-ass piece of cardboard.

The fact that these two didn't make the cut should tell you how awesome this discount bin truly was. 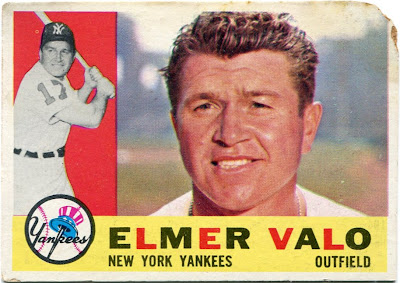 Lastly, we have this nifty 1960 Topps piece of the Czechoslovakian-born Elmer Valo.

Because of his awe-inspiring '57 Topps issue, Valo will always hold a special place in my collection. The fact that his cards usually come pretty cheap is a bonus.

This one became mine for about 33 cents, a part of a few 3/$1 off-conditioned vintage stacks I found from a terrific table.

Still, one particular quality of this piece edges out everything else.

After all was said and done, Elmer Valo played in exactly eight games for the 1960 Yankees, never getting a hit with the franchise.

Definitely one of the finer "unfamiliar uniform" pieces you'll find in this hobby.

While the few I featured tonight are terrific, you'll be seeing even more awesome vintage in the posts to come.

I hope this post got you at least a little bit more excited for those.

Since I won't be posting tomorrow, I'd like to wish all my readers out there a very happy and safe Easter holiday!

I'll be back Monday with more of what I dug up from the card show discount vintage bins.

Believe me, they featured a treasure trove of goodies.
Posted by Nick at 6:53 PM