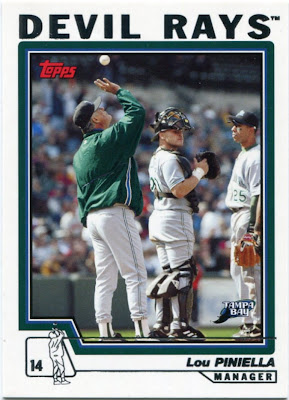 I think managers have long received the short end of the stick in this hobby.

Not many of us give them the credit they deserve. So, if manager cards aren't your thing, you might want to breeze past this post.

If you're still here, I hope you're ready to take a trip into the dime box-tastic world of skippers.

I can't say I blame people who completely ignore manager cards. Often times, it takes quite a bit of digging to find anything worthwhile.

Still, if you look close enough, you can find quite a few managerial gems in the world of cardboard. They even pop up in dime boxes every now and again.

In a lot of ways, they're not all that different from the "normal" player cards we've come to love so much.

While rare, a few good "in-action" managerial shots have found their way into the hobby.

I discovered this '04 Topps masterpiece inside of a local flea market dime box last year. To put it mildly, the exasperation of Mr. Piniella here basically sums up what managing those early/mid 2000's Devil Rays teams must've felt like.

From what I can tell, he looks like he's about ready to quit right then and there. 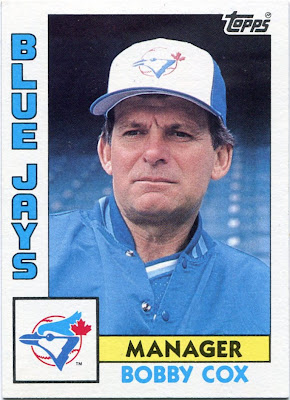 Given his legendary tenure with the Braves, I doubt many remember that Bobby Cox managed the Blue Jays for a while during the '80s.

After a largely unspectacular initial go-around with the Braves from 1978 to '81, Cox took over the reigns in Toronto. Surprisingly, he lasted four whole years with the franchise, which is probably four more than people remember.

During his final season with Toronto in 1985, the Jays won 99 games.

He became the Braves' GM the very next year. In 1990, he'd appoint himself as the manager of the franchise.

And the rest is history. 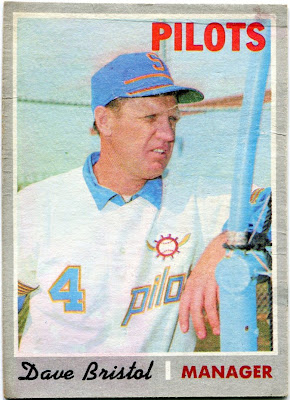 In case you were wondering, "zero-year" manager cards do exist.

To my knowledge, this is the lone one of the sort in my collection at the moment.

The Seattle Pilots' lone year of existence has become the stuff of legend over the years. In almost a last-minute decision, they up and moved to Milwaukee and became the Brewers just weeks before the 1970 season began.

Because of the sudden relocation, Topps didn't have time to fully "update" their Pilots cards that year. I haven't gone back and checked, but I'd bet a few of my other 1970 Pilots cards are indeed of the "zero-year" variety.

Before the move to Milwaukee, Dave Bristol was set to replace Joe Schultz at the helm of the Pilots. Instead, he became the first-ever Brewers skipper. (After an unsuccessful stint with the Braves in the late '70s, he'd be replaced by Bobby Cox.)

That's a card for the record books.

At least as far as my collection goes, anyways. 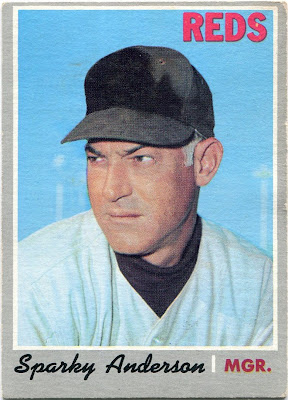 Do managers have rookie cards?

Should managers have rookie cards?

While it may not show up as such in the almighty Beckett, I do indeed consider Sparky Anderson's 1970 Topps issue to be a "rookie card".

It's the first managerial piece of one of the better skippers in the history of the game. It makes sense to label it as a "rookie", doesn't it?

Which stands for "Managerial Rookie Card", of course. 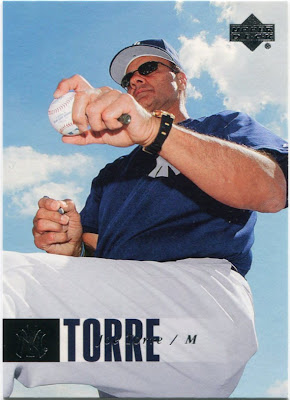 While I doubt any "bat barrel" or "double play" cards of managers exist, a few have managed to slot their way into my mini-collections lately.

As you might be able to tell, this Joe Torre fits nicely within my "autograph" ranks.

Manager or not, it makes for a terrific addition any day of the week. 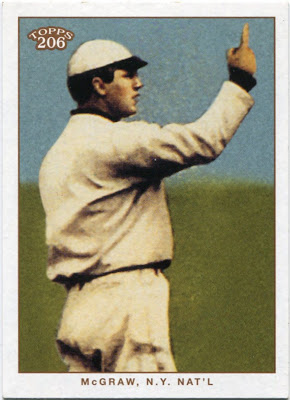 As I have with many of my "normal" player collections out there, I have assembled a few special "manager" collections as well.

Dime boxes have played a fairly substantial role in that over the years.

Just like with my more "old-time" player collections, I'm a huge fan of anything featuring turn-of-the-century skippers as well. Connie Mack and John McGraw are probably at the forefront in that regard.

This former ten-center has been a part of my binders for a while now.

Every time I see this McGraw piece, though, it always looks like he's flipping the bird upon first glance. It takes me a few seconds to realize that it's just his index finger.

Although I'd probably like it more if it did feature the one-finger salute. 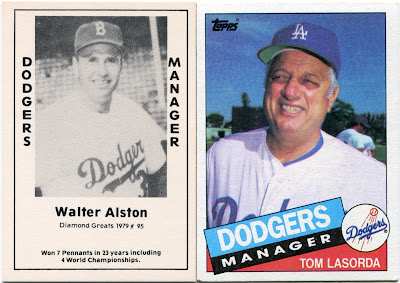 As far as sheer numbers go, I probably own more manager cards of Dodgers than any other franchise.

And it's basically all thanks to these two.

I'm always on the hunt for new Walter Alston and Tommy Lasorda pieces for my collection. Thankfully, the dime boxes have been quite good to me in that regard.

In fact, Lasorda was the only manager to crack my "Top 100". 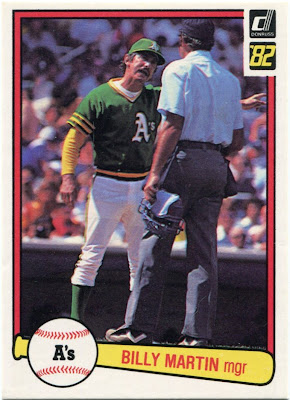 In this hobby, managers don't get much better than Billy Martin.

He's far and away my favorite skipper to collect.

While his infamous middle-finger '72 Topps card is likely Martin's most well-known piece, he had quite a few other instances of cardboard brilliance during his career as well.

I think about half of the "argument" cards I own feature Billy Martin.

This is far and away the best one in my collection, though. You can tell he's in full-on disagreement mode here. I can't help but wonder if he ended up getting the old heave-ho after this dispute.

And, although I'm a novice at stadium identification, it looks like he's arguing at his old (and future) stomping grounds in Yankee Stadium here, although I could be wrong.

So, the next time you find yourself with some extra time on your hands, I'd recommend taking a good look through some managerial cards.

If these are any indication, they've certainly been "Dime Box Heroes" to me over the years.
Posted by Nick at 1:30 PM

I've been putting aside managers cards for a while, waiting for someone to decare themselves a collector of managers. Is that what's happening here, Nick?

Even if you say no, I'll probably still send you a few good ones....

Not planning to start a full-blown manager collection (yet), but I'll still take any neat ones you happen to find.

I'm not sure my binders can hold another mini-collection right now. :)

That Martin is awesome! Love those A's unis. Check out the 74 Topps Sparky card, pretty badass!

Oddly enough I sometimes of Bobby Cox as a Blue Jays manager BEFORE I think of him as the Braves manager. The price for 1986 Topps being your first set, I guess. Steve Garvey is a Padre first in my mind for the same reason. (BTW don't tell Night Owl or gcrl that one lol).

I have a love/hate thing currently with manager cards. It's mostly having to do with my Rockies. The Rockies have had 6 managers in their history and only 3 of them appear on cardboard as Rockies manager. Jim Tracy was manager for 3 years without getting a card despite Heritage featuring managers each year. Walt Weiss is nowhere to be found in this year's set. And I would have loved to have gotten a Jim Leyland from 1999, but none exist that I have found.

I've always like manager cards, esp the classic ones from '73 with the coaches alongside.
I've considered a mini collection of manager cards myself, especially from the latter Heritage sets. They're one more missing element of the modern flagships sets, along with proper stat cards, all-stars, and post-season games.