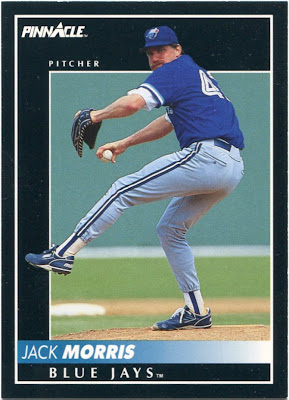 A few weeks ago, my stance on Listia had been set in stone.

In all honesty, I thought the place had "jumped the shark".

I saw common cards going for way more credits than they deserved. On top of that, some people were simply asking too much for their old cardboard.

And, most of all, the market for those fun little "gems" that I'd previously found had simply dried up.

For a little while there, I simply stopped frequenting the site. I figured it wasn't worth the effort.

Then, something neat happened.

I managed to win a 12-card lot of 1992 Pinnacle, perhaps the most underrated set in the history of the hobby, for a mere 91 credits.

The only reason I bid on the auction in the first place was to get that Jack Morris card at the top of the post. The other eleven cards were basically filler for me, although I've dispersed a few into some of my recent outgoing trade packages.

To me, the Morris alone made the 91-credit tab worth it.

In hindsight, I guess you could say that it set the Listia ball rolling again. 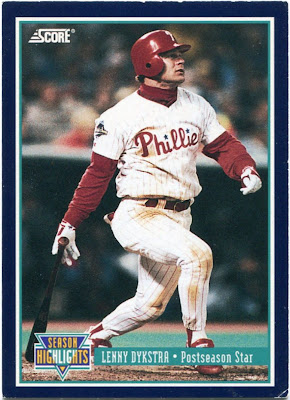 Because a few days after that, I won two separate five-card lots for 100 credits a piece.

There wasn't a whole lot of rhyme or reason to either of the lots. This neat night card of "Nails" turned out to be one of the better surprises of the bunch.

Dirty uniform and all. 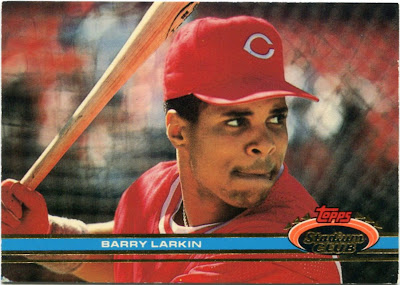 This Stadium Club piece of recent Hall of Famer Barry Larkin was also one of the more surprising beauties.

Awe-inspiring shots like these are what made Stadium Club the "cream of the crop" back in the day. 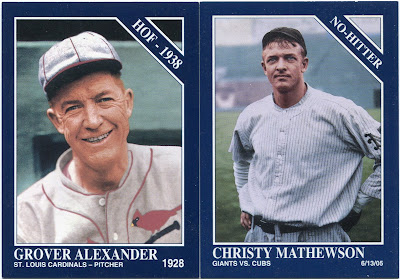 In the end, though, these were the only reason I placed bids on either of the lots in the first place.

Longtime readers of this blog should probably know of my fascination with the Conlon Collection brand. For a old-time baseball lover such as myself, it just may be the closest thing to a perfect set that has ever been unleashed onto the market.

These amazing colorized inserts are just as good as what the base set has to offer, if not better.

Given the inclusion of these masterpieces, I didn't think I had a chance in heck of winning each lot for the base 100-credit price tag.

As it turns out, though, I was the only person to bid on either of the five-card batches.

And now these spectacular pieces of Grover Cleveland Alexander and Christy Mathewson sit happily in my binders.

I still can't believe it. 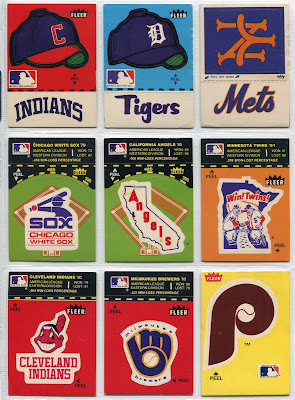 I'd say these were as close to an "impluse buy" as I've had on Listia so far.

Not long after my initial Pinnacle victory, I saw someone selling a 12-lot of these neat '80s Fleer Team Stickers cards.

I'd never specifically set out to collect any of them, but I threw out a courtesy bid nevertheless. I didn't want to blow too many of my credits, but they were just too neat to completely pass up.

Looking back, "surprised" isn't a strong enough word to describe how I felt after seeing that I'd actually won the auction.

Perhaps "befuddled" is more or less what I'm looking for here.

As it happens, I paid a mere 142 credits for the lot. I'm no math aficionado, but I'm pretty sure that comes out to less than twelve credits per sticker.

And, as if it couldn't get any better, the enjoyment I get out of these things is actually two-fold. 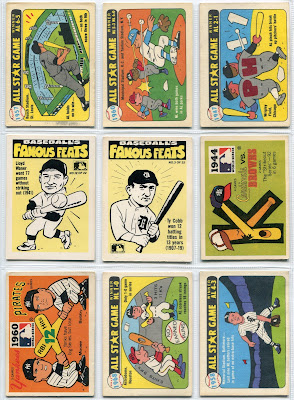 With these, the backs are just as awesome as the fronts.

I've never had as much All-Star Game knowledge as I've thought I should. These should help change that in due time.

Not bad for twelve credits each, wouldn't you say? 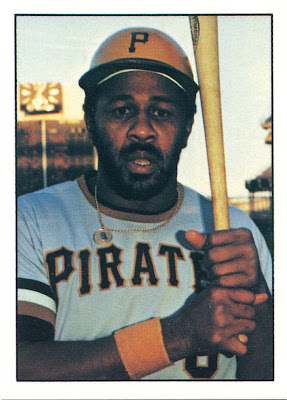 Before these came along, I never thought I'd pick up any sweet vintage pieces off Listia.

I'd always viewed it as a place where I could find little knick-knacks on the cheap. Nothing too fancy, simply things a low-end collector such as myself would enjoy.

Well, "Pops" and a few others you're about to see did their part in changing that line of thought.

Even so, this Stargell isn't just a sweet vintage card.

It's a sweet oddball vintage card.

Although I'm not exactly sure how they were distributed back in the day, this particular piece comes from the often-overlooked 1975 SSPC set, one that I personally consider to be of the "oddball" variety.

As with the Fleer stickers, I didn't think I placed a "serious" bid on this one at the time. My credit budget just didn't allow for it.

But, once again, Listia managed to befuddle me. 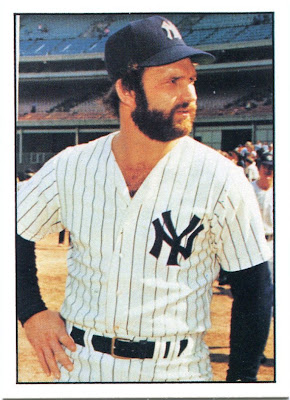 Although my dad evidently wasn't a huge fan of his during his childhood, Thurman Munson has quickly become one of my favorite players of the 1970's.

Because of that, I instantly fell in love with the "heroic" stance that the late Yankee backstop is sporting on this SSPC piece.

I desperately wanted to have this one for my collection. Like the Stargell, though, I didn't think I'd have enough credits to make that happen.

Once again, I was proven wrong.

Mr. Munson here became a cherished part of my binders for just 336 credits.

I ask you, does it get any better than that? 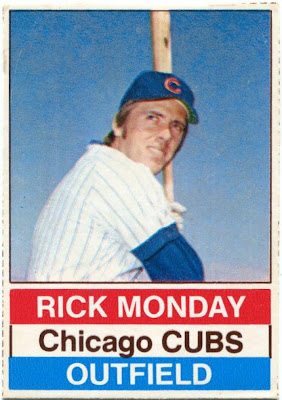 It does get better than that.

The auction that fully restored my faith in Listia was a four-card Hostess lot I stumbled upon one night.

As you might be able to tell, I've been on a huge oddball kick these last few months. And, as far as I'm concerned, Hostess cards are the "king of oddballs".

Now, my exact thought upon finding this auction was short and sweet.

"I must have these!"

In actuality, I only needed two of the four cards in the group. American flag "savior" Rick Monday is definitely a treasured addition to my collection.

But he wasn't the real reason I plunked down over 2,000 credits for a few Hostess cards. 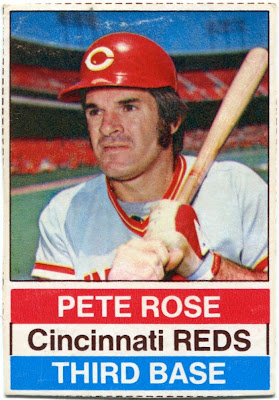 The all-time hit king himself. Charlie Hustle. You know, that guy.

Ah, what the heck. This blog isn't under any sort of MLB sanction.

Words cannot describe how great it is to have this piece of cardboard history in my collection. It's that awesome.

Although the 2,432-credit price tag was a hefty one, I felt it was more than justified to acquire an authentic Hostess piece of Mr. Pete Rose.

And it's all thanks to Listia.

I'm sorry I ever doubted the place.
Posted by Nick at 6:23 PM

Wait til you see what I picked up on Listia recently.

I don't think I'll do any better.

I love Listia. You can't always find what you want, but it's really fun to see what pops up.

I use it to trade my old cardboard in for cards that have value to me.

One man's junk is another man's treasure on Listia.

Not a huge Listia fan, but 1992 Pinnacle is AWESOME! Great choice of putting it as your "headlining" card.

I've picked up a few items that I'm really pleased with on Listia recently. Now to post them on the blog.

I found a color Conlon in my collection just last night. I had no idea I eve had it, but looked at it for a long time because it a beauty.

I'd send it to you, Nick, but it's a Yogi Berra and I'm right in the middle of his book which has made me a giant fan.