I thought you said the Great...Bambi 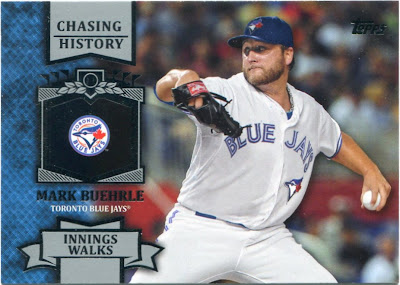 I don't claim to be a movie buff.

I've been to the movies exactly once over the last six months or so. I went from my sophomore year of high school to my freshman year of college without stepping foot in a theater.

And, for that matter, I don't see my all-time favorite flick ever changing. In fact, it's been that way since I was about five years old.

The title of this post is one of the many, many memorable quotes from my personal favorite piece of cinema.

On top of that, it'll give you a clue as to who sent the terrific batch of cardboard you're about to see in this post, which just so happens to be my 700th write-up in this blog's history.

While I don't think his blog title is an homage to the movie, this latest trade package came from Joe, author of the terrific blog "The Sandlot".

So, yes, although other classics like Ferris Bueller's Day Off, The Big Lebowski, and Superbad have tried to give it a run for its money, The Sandlot is and will always be my absolute favorite movie.

Despite the title of this post, though, Joe didn't send over any Babe Ruth cards. However, what he did end up finding for me proved to be memorable in its own right.

Originally, Joe contacted me because he had a few hits to my 2013 Topps insert needs.

Photoshopped and all, this "Chasing History" card of Mr. Buehrle is quite an interesting piece. His first-ever card as a Blue Jay proved to be an insert, rather than a base card.

That isn't something you see every day in this hobby. 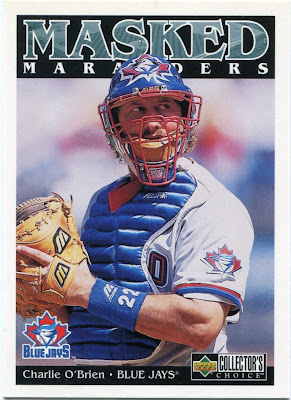 However, this trade quickly turned into a whole lot more than a simple 2013 swap.

After a couple more emails back and forth, Joe informed me that he'd dropped "a few other things" he thought I'd like into the trade package, including a batch of Collector's Choice cards.

While Joe sent me quite a few nice "CC" pieces, this one of the "Masked Marauder" himself, Charlie O'Brien, easily stood above all.

Even though he's not a "binder guy", anything that features O'Brien in that revolutionary hockey-style catcher's mask will always warrant a place in my collection.

This one will look terrific next to his similarly-themed '97 UD card.

Plus, any card that pays respect to the "tools of ignorance" is a winner in my book. 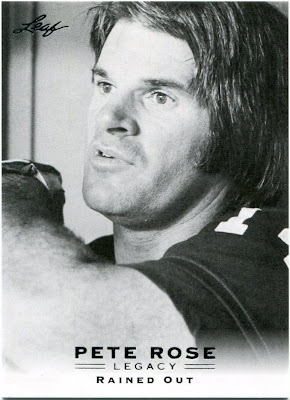 This has to go down as one of the most unnecessary sets in cardboard history.

The 50-card checklist for the 2012 Leaf "Pete Rose: The Living Legend" release is entirely comprised of, you guessed it, Pete Rose.

I get the fact that Leaf was trying to capitalize on one of the few brighter spots of not having an MLB/MLBPA license. I love that unlicensed sets can produce Pete Rose cards these days.

But, come on. This is a wee bit too much, don't you think?

Here's what the back of this particular card reads:

"Phillies' Pete Rose sits in a corner of the dugout as rain forced cancellation of batting practice on Friday, Sept. 14, 1979 in Philadelphia."

I'll admit, the design isn't bad. Very clean and unobscured. And, although I don't plan on obtaining all 50 cards, I am quite happy to finally have a single sample from the checklist.

Call me when you produce an all-Hoyt Wilhelm set, though, Leaf. 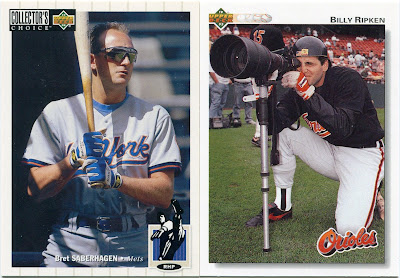 As has basically become the norm with my trade partners, Joe generously took some time out of his day to hunt down pieces for my wacky "mini-collections".

It means a lot to know that people are actually searching their boxes of dups to find a few cards for my binders.

I can't help but wonder how many other Orioles and/or 1992 Upper Deck cards Joe had to dig through to find that Billy Ripken "behind the camera" piece.

"Rip" there is one of those cards that I've seen a few times before, but had never been able to hunt down for myself.

As you can probably tell, the Saberhagen adds to my rapidly-expanding "pitchers at the plate" collection. One of these days, I'll have to go through my collection and count up just how many of those things I own.

And, since we're talking about Bret Saberhagen... 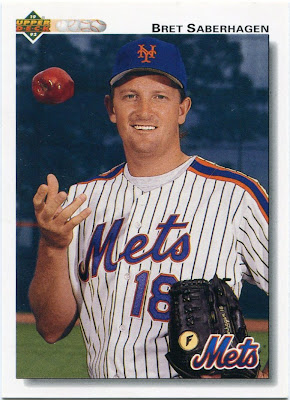 Take a gander at this one.

It caught me off-guard at first. I had to do a double-take to make sure my eyes hadn't deceived me.

Naturally, a couple questions formed in my mind.

For one thing, I wanted to know how I'd never seen this one before. After more than a dozen years in the hobby, you'd think I would've come across it at some point in the past.

Had Joe not included it in this trade package, perhaps I would've remained in the dark for another dozen years.

And, even more importantly, I want to know the premise behind this particular photo shoot.

What could've possibly prompted the photographer to have Saberhagen toss an apple into the air? And, now that I think of it, where did the apple come from?

"Nah, we've seen that 'baseball in the air' pose too many times before. Hmmm...Here's an apple from my lunch pail. Try that, Mr. Saberhagen."

This really makes me wonder how many other wacky cards are floating around out there, just waiting to be discovered. 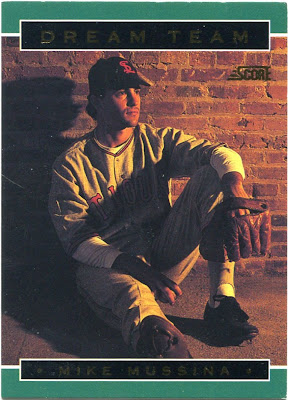 The advent of throwback jerseys has made for some fairly jaw-dropping pieces of cardboard over the past twenty-plus years.

Off the top of my head, though, I can't think of many that have this one beat.

While it may be tough to discern due to the lurking shadows, Mike Mussina is sporting a 1936 St. Louis Browns jersey on this Score "Dream Team" insert. The Browns, of course, were the predecessor to today's Baltimore Orioles franchise.

Absolutely everything about this head-turner is "old-school". The glove, the cleats, the hat, all of it.

On top of that, the shady candlelight overtone and brick-wall background look like something taken directly out of an early gangster movie.

As crazy as it might sound, though, it might not have even been the most striking card from the package. 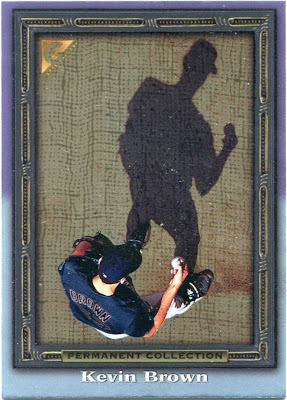 It's always nice to acquire a card I've coveted for a long time.

Joe managed to hit one of those needs with the Billy Ripken piece I showed earlier.

However, in most cases, I'm starting to think that I get more of a thrill out of finding a new, out-of-the-blue card for my collection.

Whether it be from a trade package, a dime box, or wherever, finding something that simply makes you stop and say, "Wow!" is a special feeling.

And I'm sure it's one we've all experienced before.

That thrill presented itself quite a few times during my dig through Joe's trade package, especially in the cases of the apple-wielding Saberhagen and the throwback-wearing Mussina.

However, in terms of sheer visual appeal, I can't remember the last card that captivated me more than this Kevin Brown masterpiece.

Yes, from what I've read, Brown was kind of an assh...or, um, an unpleasant human being during his time in the bigs.

Despite his personality, though, Kevin Brown has long been one of my "binder guys".

And this, without a doubt, is my new favorite card of his.

I've never been a huge fan of the Topps Gallery brand. This one may well have turned me into a Gallery convert, though.

I'm not quite sure how the photographer managed to snap such a bird's-eye shot, but the angle of Brown's shadow is absolutely perfect for the frame of this card.

As a whole, shadows have crept their way into the world of cardboard on many occasions. However, I have to believe that this is easily the most prominent display of one on a baseball card.

While this was our first trade, it appears that Joe already has a great handle on my many interests in this hobby. I had an absolute blast going through everything.

I'm still trying to pick my jaw up from the floor after seeing the likes of Mussina and Brown.

Given all that, I think it's safe to assume one thing.

When it comes to trade packages, Joe is definitely not an L-7 weenie.
Posted by Nick at 1:30 PM

I think the Saberhagen card had to do with him signing with the Mets during the offseason and moving from KC to "The Big Apple."

I love those Masked Marauders cards. The only ones I have are of Brian and Charles Johnson. Not brothers, but definitely cool cards.

Ferris Bueller is No. 3 on my list, well ahead of The Sandlot. Still, there is no denying Wendy Peffercorn, and Benny is cooler than almost anybody that I've ever met in real life. Great flick.

I have to wonder what a person who has never seen baseball cards would think they were just from looking through your binders.

And how boring all the rest of the cards in the world would seem by comparison.

Awesome man, glad you liked all the cards!

Matt's right, that was Upper Decks cheesy way of welcoming Saberhagen to NY, "The Big Apple".

And the movie absolutely had influence on the blogs title!