Defective to some, stories to others 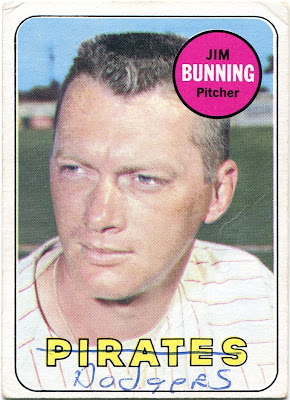 When it comes to the issue of condition, I can see both sides of the coin.

Despite what my writings might have you believe, I can understand the collectors who only accept top-grade cardboard. Being able to own pages upon pages of shiny, like-new baseball cards must be neat, especially when it comes to set building.

I've never been able to afford it.

That's the funny thing, though.

Even if I were to suddenly win the lottery or something, I'd still devote a good chunk of my card show schedule to scouring the dime boxes and discount vintage bins.

While I have been known to pick up a few well-conditioned pieces here and there, the majority of my vintage cards are what some in the hobby would call "defective".

Creases, chipped corners, and tape residue are only some of the "defects" you'd see in my binders.

To me, though, every crease and chipped corner holds a story. Maybe the kid won my battered 1960 Topps Whitey Ford in a flipping contest. Perhaps that same kid proudly taped his new "find" onto his dresser at one point.

However, nothing holds more of a "story" to me than a little writing on a baseball card.

As you'll see in this post, I've encountered quite a few of those during my time in this hobby.

Most of the ones that pop up are those of the "new team" variety, as we have with the card at the top of this post.

I'm not exactly sure where I landed that little gem, but one of its previous owners updated Bunning's card that year to reflect his late-season trade to the Dodgers in '69.

Although I know at least one exists, I've never been able to find a Dodger card of Jim Bunning. This is probably the closest I'll ever get.

That in itself makes it a landmark piece in my collection. 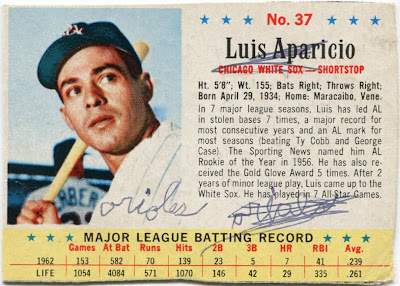 As has been mentioned in the past, Post cards were apparently more susceptible to "updates" back in the day.

My card show travels have turned up quite a few of the sort.

This awesome piece of "hometown hero" Luis Aparicio popped out of an otherwise-unspectacular 50-cent bin a couple years ago.

Evidently, a little writing negates the whole "hometown inflation" factor as well, because I don't recall seeing any other Cubs or Sox cards in that bin.

Although it was sandwiched in between two stellar stints with the White Sox, Aparicio had a fairly successful five-year run from the Orioles in the mid '60s.

From what I can tell, the kid who "updated" this piece looks to have been learning cursive in school at the time. You can see his failed attempt at scribbling the "Orioles" moniker underneath the printed text.

In the end, though, he managed to write the "Orioles" name in perfectly acceptable cursive underneath Aparicio's photo.

These days, it certainly has a good home with me. 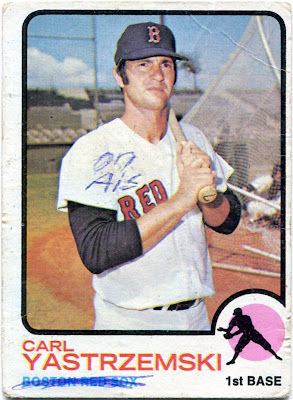 A couple of the scribbled-upon cards I own are downright confusing.

Given that the "Boston Red Sox" text at the bottom of this card is scratched out, I have to believe that the original owner of this card was going for some sort of "update".

Plus, the center of it features what looks to say "On Ais". I'm guessing that's a phonetic spelling of the A's team name.

As we all know, though, "Yaz" was a lifelong member of the Red Sox.

With this one, your guess is as good as mine. 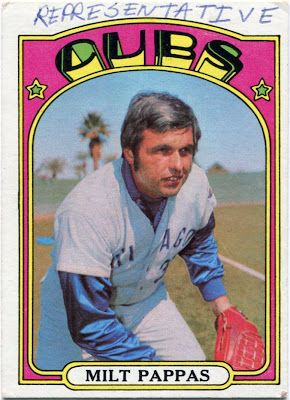 This card has been in my collection for as long as I can remember.

It has been a sacred piece of my Cubs binder for at least ten years or so.

Yet, I still can't figure out what that "Representative" label at the top is supposed to mean.

At first, I thought Pappas had served in Congress or something. That theory was quickly shot down. (Although it would've worked on a Jim Bunning card, incidentally.)

Perhaps Pappas was a part of that '72 National League All-Star team. That would make sense, wouldn't it?

Although he enjoyed a fine season with the Cubs in '72, Pappas was left off the All-Star roster.

Both "Yaz" and Milt Pappas have left me absolutely stumped.

Still, that sense of mystery makes them even cooler to me. 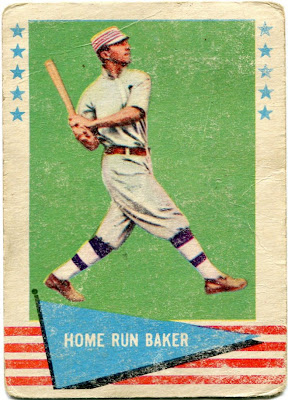 As far as vintage goes, these have long flown under the radar.

Due to the original "Topps monopoly", Fleer manufactured a few "Baseball Greats" sets back in the day. The checklists were comprised entirely of past legends of the game.

At the time, though, they didn't sell well at all. Most collectors just didn't care about the likes of Earl Averill and "Home Run" Baker.

They wanted to pull Mantles and Sniders from their packs. I can't say I blame them.

One of the vendors at the last couple big shows I've attended has put a 12/$5 vintage box on display. I've found large stacks of these "Baseball Greats" inside on both occasions.

Given my interest in the "old-timers", I'm always quick to scoop them up. I've had to peck away at the stacks, though, because my budget simply doesn't allow for me to go too crazy with these 12/$5 bins.

As a result, I had to settle on the "best of the best" from this set. And, as far as my collection goes, "Home Run" Baker belongs in that category.

While the front is certainly neat, the true story of this one lies on the flip side. 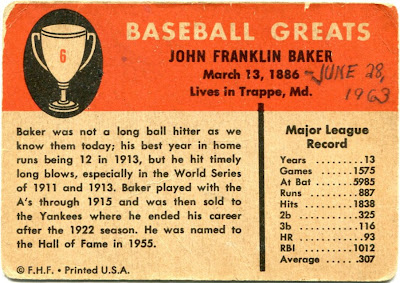 To tell you the truth, I didn't even notice the writing until I was going over my "finds" from that show the following day.

I guess at least one collector had a vesting interest in the "old-timers" when Fleer released this product.

The fact that anyone would update this piece to reflect Baker's passing on June 28th, 1963 speaks volumes to that.

I see it as a personal bond between myself and a collector during the '60s. Only a true fan of "old-time" baseball would've reflected the death of "Home Run" Baker on this piece.

That instantly makes it one of the more inspiring parts of my collection.

I have a card show coming up in a couple weeks. I'm sure I'll come across one or two of these during my travels.

Now, if you happen to find one in a quarter or fifty-cent box at a future show, I beg you to pull the trigger on it.

After all, the story is worth the price tag alone.
Posted by Nick at 5:57 PM

Hey man, even misfit toys needed a home, right? You are like the king of the island of misfit cards.

I'm right there with you, man. I suppose I can technically afford nicer cards, but if I had the opportunity to buy a $40 1973 Mike Schmidt or a $140 Near Mint copy of the same card, the extra enjoyment I'd get out of the condition is nowhere near worth $100 to me. I'd rather spend the extra Benjamin on other cards.

I would rather have a well loved card any day. I have a theory on the Milt Pappas card. I believe that he was an MLBPA player rep when he was on the Reds and he may have been the Cubs player rep. There was a short player strike in 72, so someone may have updated his card to reflect his status as the team's player rep.