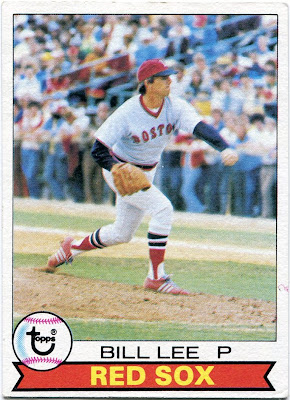 As it happens, tonight's post is another dad-centric one.

I've been a Bill Lee fan for as long as I can remember. Of course, that quality of mine was pretty much passed down from my dad.

He was a huge Lee fan during his childhood in the '70s. Next to Mr. Fidrych, the "Spaceman" may well have been the icon of his baseball life.

Because of that, Lee has always been in the top tier of my player collections. The fact that his cards come pretty cheap has helped quite a bit with that.

As has become the norm for these "sunset" posts, I was forced to choose a "peak year" in terms of Lee's cardboard. After flipping through my Red Sox binder for a few minutes, I came to a realization.

Every Bill Lee card is my favorite one.

If I had to choose a single, solitary piece, though, I'm inclined to go with this '79 Topps issue. The very 1970's attire of the people in the background fits nicely into the topic of one of my recent posts.

Moreover, in one of the proudest moments of my life, it's the one I had the "Spaceman" sign when I met him a few years ago.

Incidentally, Lee's 1979 Topps issue was also the last he'd have in a Red Sox uniform.

His "sunset" years took him north of the border. 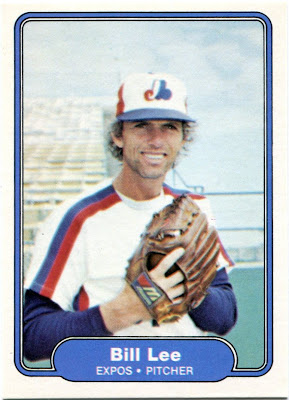 After a dispute with then-Boston manager Don Zimmer and the rest of the franchise, Lee was dealt to the Expos for weak-hitting infielder Stan Papi just before the start of the '79 season.

From what I've heard, the name "Stan Papi" is a bit of an infamous one around Boston nowadays.

The "Spaceman" produced during his first year in Montreal, winning 16 games while posting a solid 3.04 ERA.

Following just seven games with the Expos in '82, he famously walked off the team after the release of speedster, teammate, and close friend Rodney Scott. Montreal released Lee due to his actions, essentially "blackballing" him in the process.

The "Spaceman" would never play in the bigs again.

As a result, his rather abrupt "sunset" cards come from the trio of 1982 checklists. Thankfully, Topps, Donruss, and Fleer all gave him a respective cardboard send-off.

Some of you might recognize this '82 Fleer card as a former "Dime Box Dozen" need of mine. I actually made it a part of a smaller "impulse buy" recently. You'll see the rest of my acquisitions in an upcoming post.

Honestly, I'm not sure how a "sunset" card of Bill Lee had escaped my clutches all this time. I guess I should just be thankful that it's finally in my collection.

That's all that matters. 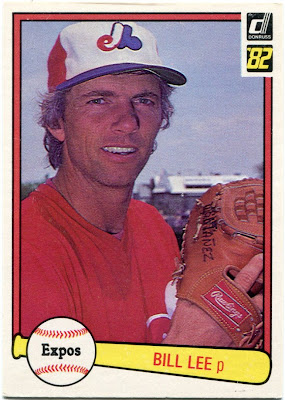 The choosing of a runner-up for this "sunset" post was a tough decision.

All three are among my favorites in the theme. Yes, even the out-of-focus quality of '82 Fleer still managed to strike my fancy.

What pushed Donruss slightly ahead of Fleer, however, was one of those "little things" I noticed upon closer examination.

That glove looks a wee bit too small for the "Spaceman", doesn't it?

There's a simple explanation for that.

If you look closely, you'll see the last name "Montanez" scribbled across the thumb of the glove. It actually belonged to then-Expo first baseman Willie Montanez.

I've looked at this card dozens of times before and never picked up on that.

If I hadn't written this post, I doubt I ever would've discovered it. 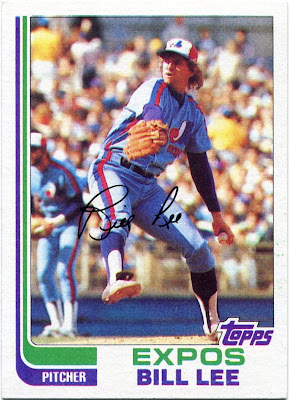 Thus far, Topps hasn't had as many "sunset victories" as I would've predicted.

I've found myself crowing the likes of Fleer and Donruss as "champions" quite a bit during the early stages of this theme.

In the case of Bill Lee, however, Topps definitely earns the top slot in my book.

Although the "hockey sticks" of '82 has never made for one of my favorite designs, they hit a home run in giving the "Spaceman" a proper send-off.

As I've found, action shots are a surefire way to move up in my "sunset" countdowns, which is exactly what we have here.

Although the '80s were fairly lenient in terms of hair length, Lee's always seemed a little longer than most on this card.

All in all, it has the makings of a personal favorite "sunset" card any day of the week.

The only thing that could've made it better was if Topps managed to snap a shot of that epic beard he used to sport.

Sadly, I don't think his awesome facial hair has ever made its way onto cardboard.

Nevertheless, the "Spaceman" definitely has one of the better "sunset" collections around.

More than almost anyone else I've seen in my years, Bill Lee is a genuine fan and devotee of the game. Even at 65 years of age, he still pops up in independent league games now and again. He even won one of them last year.

On top of that, you can watch Spaceman: A Baseball Odyssey for further proof. It's easily one of the better baseball documentaries out there.

As you may have noticed over the last year or so, Lee has been a recurring point of conversation during this blog's history.

Expect that to continue down the road.

A few things you may or may not know about Bill Lee:

He was seen as the leader of "The Loyal Order of Buffalo Heads", a group of Red Sox players (including Ferguson Jenkins, Bernie Carbo and Rick Wise)that manager Don Zimmer hated so much that he refused to play them.

He gave Don Zimmer the nickname "The Gerbil".

The home run Tony Perez hit off of him in the 7th game of the '75 World Series is still going.
(At least in Boston folklore.)