Diamonds in the rough, Pt. 2 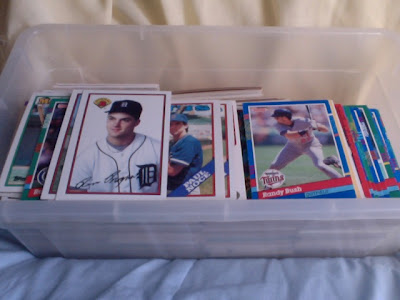 I never intended for this to become a "thing" around here.

Yet, thanks to the warm reception I received for my first post of this sort, I've decided to revive it for tonight's write-up.

For those of you who missed my initial "Diamonds in the Rough" post, the concept behind it is pretty simple.

Like most other collectors, I have boxes and boxes full of old, forgotten cardboard spread out amongst the parameters of my room. Most of these boxes haven't been touched for a few years, if not more.

Thanks to the blogosphere, I've developed a new outlook on the hobby. After all, I've learned that "gems" can be found literally anywhere in the world of baseball cards.

My goal with these posts is to showcase the little "treasures" that those long-forgotten boxes in my room have held for all these years.

Because of the blogosphere, though, I'm finally getting around to discovering them.

What you see above is what I first witnessed after pulling off the lid of the latest card-filled tub. At first, I wasn't all that enthralled with the thought of sifting through stacks of '89 Bowman and '91 Donruss.

But, as I hope to show in this post, a little searching provided me with a slew of new cardboard gems.

Like this post's predecessor, my latest dig uncovered quite a few "diamonds in the rough". 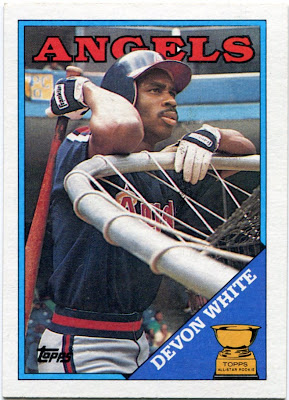 For a long time, I denounced 1988 Topps as one of the worst sets ever unleashed onto the market.

But, as I discussed in a recent post, I've started to lighten up to it in recent years.

I wouldn't say I'd rank it as one of the outright best sets of the overproduction era just yet, but '88 Topps certainly deserves a lot more credit than I'd originally given it.

Although fairly typical for the era, the photography within the set isn't all that exciting.

Still, if you look closely, there are a few terrific shots spread out amongst the checklist.

As far as just photography goes, this one of former "Rookie Cup" winner Devon White may well be the best 1988 Topps has to offer.

Such a terrific batting cage shot would've fit right in during the vintage era of the hobby. 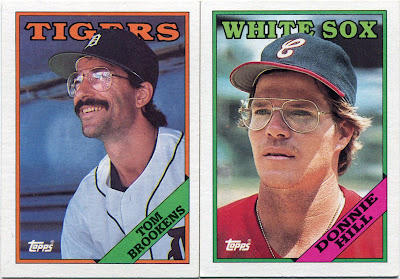 My interest in bespectacled ballplayers has gained a ton of steam in recent months.

Now, a little bell goes off in my head every time I see one featured on a baseball card.

Needless to say, this pair set those alarms into full force. 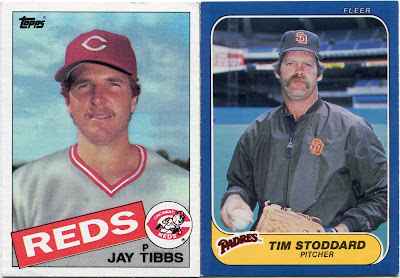 While the amount of terrific photography might not have been at a high level, the '80s certainly provided a good share of simply interesting cardboard.

I don't know about you, but that one of Jay Tibbs features one of the worst airbrush jobs I've ever seen. That thing looks like it could glow in the dark.

And Tim Stoddard more resembles a guy you'd see at a local tavern than an actual big-league pitcher, does he not?

Like I said, these cards may not be the best ones out there, but they sure make for good blog material. 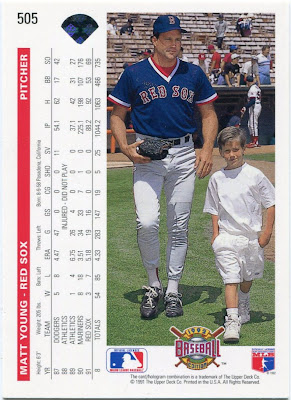 Believe me, the front of Matt Young's 1992 Upper Deck issue isn't anything special.

The back is what really caught my attention.

Between his haircut and the matching white shirt and pants, Matt Young had one stylin' kid back in the day.

He even has the sophisticated "hands in the pockets" look down pat. 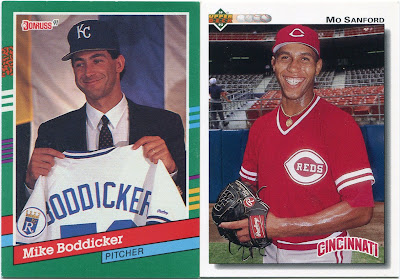 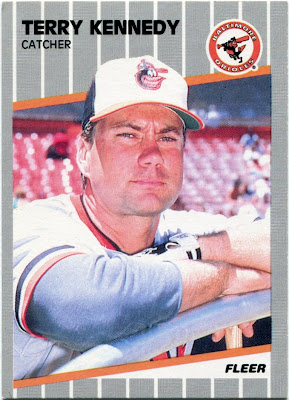 You obviously don't want to be bothered right now. 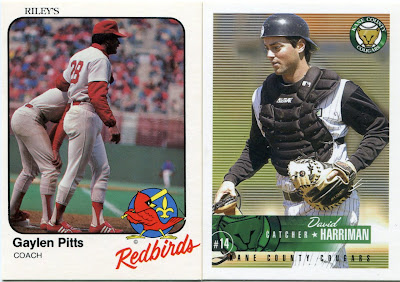 Minor league cards were one of the few carryovers from my last "diamonds in the rough" post.

A good deal of the Kane County Cougars team set I bought as a kid showed up in the last box I dug through. A few more popped up inside this one, too.


I can't help but wonder just how many minor league cards are lurking in these old boxes.

Guess I'll have to do more digging in the future to find out. 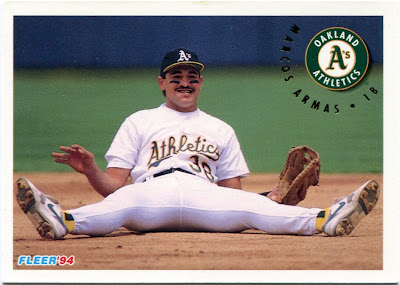 This is perhaps the most disturbing baseball card I have ever seen.

I...I...I don't know where to even begin here. Actually, I don't even want to begin with this one.

I'll just let my readers fill in the blanks. 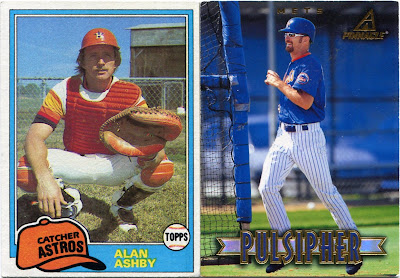 Quite a few of the cards I found were, for the lack of a better term, cool.

Way cooler than I ever thought I'd discover out of one of these old boxes. But, then again, that's what these posts are all about.

The Ashby is one of the finer catching shots you'll see in this hobby. I ask you, how awesome is that red chest protector?

Mr. Pulsipher there is a shiny new addition to my sparse "pitchers on the basepaths" collection.

Plus, it provides further evidence as to just how awesome Pinnacle was in its day. 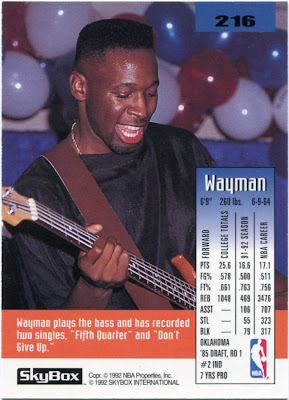 Almost all of these boxes hold stacks of cards from other sports.

I dabbled in baseball, football, basketball, and hockey during my pre-teen collecting days. At the same time.

I'll never know how I afforded it with my modest ten year-old budget.

While I see myself as a baseball-exclusive collector for the rest of my hobby life, that doesn't mean I can't appreciate cardboard from other sports.

Without this "diamond in the rough", I would've never known that late NBA star Wayman Tisdale played the bass.

Since I have yet to see a bass-themed baseball card for the "cardboard band", Mr. Tisdale is more than welcome to fill in as a guest performer.

He'd really fill out their sound. I found an awesome vintage piece of former NFL star Deacon Jones during my last "dig".

One that I'm proud to say made another blogger happy, as well.

This box yielded a few sweet NBA vintage cards. While I have absolutely no idea how they fell into my hands, I can see why I bought them as a young collector.

Plus, now I can say I have a card of a guy who legally changed his name to World B. Free.

How cool is that? 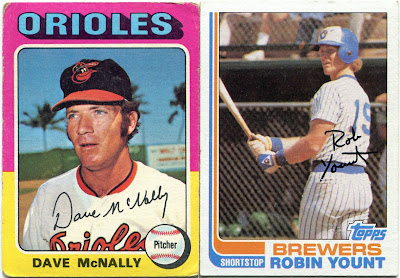 Nothing from '75 Topps deserves a life inside a dimly-lit closet.

That's for darn sure. 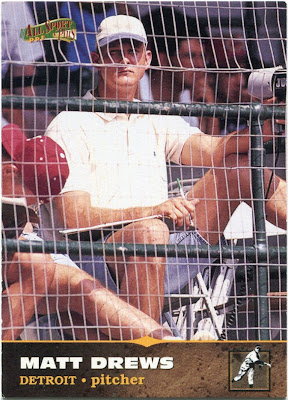 Even with all the terrific finds I've showcased thus far, I think this one has to be my personal favorite.

After all, oddballs have a tendency to become great "diamonds in the rough".

I guess you could consider this one an "action shot" in an unconventional sense.

The fact that the Tigers had Drews keeping score and corralling the radar gun while his teammates were on the field probably shows the franchise thought of his abilities at the time this card was released.

For the record, this card hit the market in 1996. So, just what was Drews's record in the minors that year?

Drews never made it to the big leagues, which probably isn't that big of a surprise to many.

Like I said, there are quite a few discoveries to be made in the world of baseball cards. Even ones under your own roof.

So, the next time you have some free time on your hands, I'd recommend taking a look through one of those old, forgotten boxes in your house.

You might be surprised at what you can find.
Posted by Nick at 6:28 PM

That Marcos Armas '94 Fleer card... Wow. I know I shouldn't look at it, especially in a certain area. But, it's like one of those shows on cable where they're performing heart surgery or whatever, and there are guts and blood everywhere. You're horrified to look, but you can't help it. It's kinda like that.

Oh, and I totally agree with you on that '88 Devo card. One of the real winners of the set!

Makes you wonder what Marcos Armas photos were rejected.

I think I've softened on several sets over the years, but so far I can't say that the 88T set is one of them. On the flipside... I'll take an 88T card over those Score Board All-Sport PPF cards. It seems like every Craigslist or flea market box I come across has a ton of those cards. Matt Drews might just be the best card in the bunch ;-)

That Wayman Tisdale brings back some memories. I may have to dig mine out sometime.