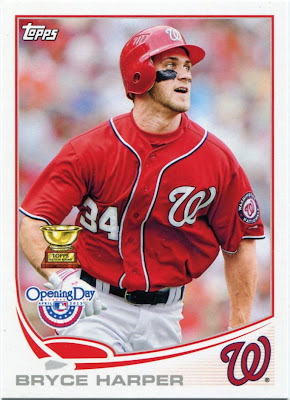 Opening Day has always been a bit of an enigma.

Some love it, some hate it. Some collect it avidly, while others ignore it all together.

It's tough to get an overall feel of Opening Day's reception in the hobby a lot of the time. The opinions just seem to be too varied.

I'm probably somewhere in the middle.

While it probably receives the least fanfare of any other Topps set, I've always found Opening Day to be fairly enjoyable.

What puts this set in the "average" category, however, is the wasted potential. You've probably heard this a million times before, but, yes, Topps recycles Series 1 photos for their Opening Day release.

The only differences are the lack of foil and the Opening Day logo.

If Topps could find it in their heart to unearth a different photo of Series 1 guys like Bryce Harper, then they'd really have something. The budget-friendly price is already working in their favor.

Until then, it'll never move past the "average" ranks.

Nevertheless, I still try to open a bit of Opening Day each year. Luckily, my dad surprised me with one of the 24-card "fat packs" from Target before Saturday's card show extravaganza.

While overshadowed by the rest of the "gems" I took home that day, this latest batch of Opening Day managed to provide a few highlights. 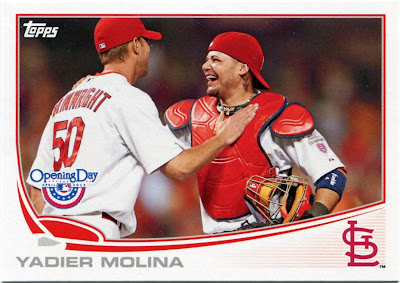 Again, this is a nice shot of Yadier Molina.

But it's the same exact one that was featured on his Flagship release. And I know for a fact that this isn't the only shot of Molina in existence.

By the way, I've never understood why Topps doesn't release Opening Day on, you know...Opening Day. 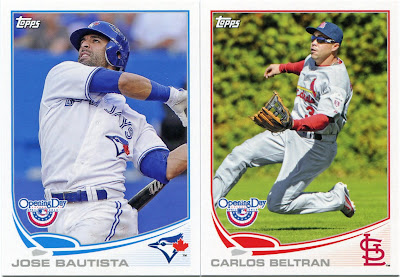 Okay, I think I've harped on the negatives of Opening Day enough.

I'm a positive type of collector, so let's have a look at the brighter side of this set.

Although Flagship's Series 2 release usually doesn't hit the market until June, Opening Day always seems to provide a few "previews" into the checklist.

Neither Jose Bautista nor Carlos Beltran appeared in the Series 1 release, so chances are that they're Series 2 "holdovers".

If that is indeed the case, then I think Topps selected surefire winners with both of these. Especially the Beltran. 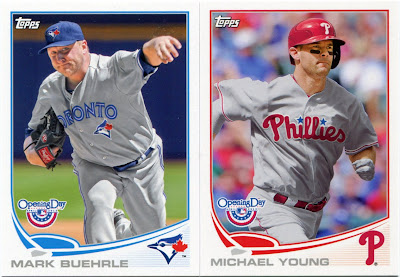 Personally, I've always seen the newly-photoshopped jerseys as a plus for Opening Day.

I can see where others might not enjoy these as much, but I'm always excited to welcome offseason acquisitions into their respective team binders.

Admittedly, though, neither of these guys look right in their new uniforms just yet.

I'm not sure Michael Young ever will. 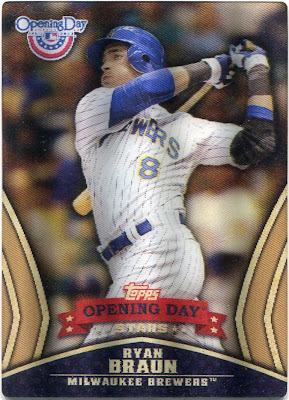 While the base cards are certainly of interest, the real "meat and potatoes" of Opening Day have always been the inserts.

In fact, I'll go out on a limb and say that Opening Day might even outdo Flagship in that department.

Over the past few years, the most constant "winners" from the release have been these nifty 3-D "Opening Day Stars" inserts.

While the base set might be in need of a massive overhaul, Topps should never screw with these. They're perfect as is.

Perhaps they're even due for a "graduation" into the Flagship checklist. 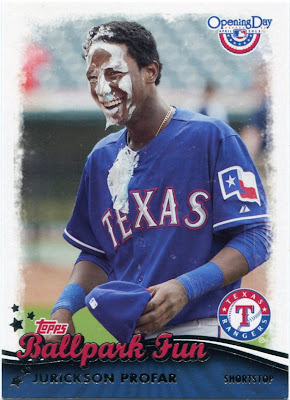 New to this year's Opening Day release is the "Ballpark Fun" insert series.

I've only had a few brief glimpses at these so far, but there's no doubt in my mind that I'll be chasing more of these down the road.

The basis behind this insert series is pretty obvious.

Baseball should be fun.

On top of that, collecting should be fun.

These inserts manage to combine both of those ideas into one. While Topps may have overplayed the whole "pie-in-the-face" shots with their SPs over the past few years, I see absolutely no problem with them showing up on standard inserts.

Others may disagree with me on this front, but I actually like these pie-in-the-face shots. I'm not ashamed to admit it.

As long as they're not of the super-SP'ed variety, of course.

Then it just gets annoying. 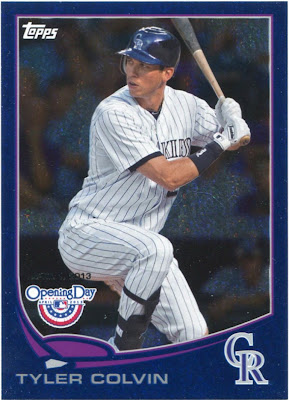 While the base set might be the same lackluster thing year after year, it's apparent that Topps is moving forward with Opening Day's inserts and parallels in 2013.

After years of fairly boring blue-bordered numbered issues, Topps really stepped it up with these "blue foil" parallels this year.

This one may look pretty nice in the scan, but, believe me.

They're a lot more awe-inspiring in person.

While Tyler Colvin isn't a "binder guy", I still couldn't help but stare at this one after first laying eyes upon it.

I think they might have the emerald Flagship parallels beat.

There's still a whole lot to fix when it comes to Opening Day. As I said before, it certainly has a boatload of potential. Topps just needs to capitalize on it.

On the whole, though, Opening Day remains a fun little set that doesn't hurt the wallet a whole lot. The inserts alone manage to provide the bang for my buck. Topps is certainly on the right track there.

Despite its shortcomings, I'm happy that Opening Day continues to hit the shelves each March.
Posted by Nick at 6:00 PM

It's a nice-enough bridge between Series 1 and the (way used to be) good stuff that comes out in April.

It's considered a budget set, but for only $1.50 less you get less cards than a Flagship rack pack, so the value just isn't there unless you get it in bx form.

Coincidentally, I pulled the same Tyler Colvin from the only pack I bought.

You can put me into the "love Opening Day" category. I think it takes out the worst part of flagship, the foil, and keep the photo and design. I didn't love the 2012 set because the blue parallels looked exactly like the Wal Mart parallel in flagship. I love the fix.

BTW, if that Colvin is up for grabs...don't forget about me.

You can put me in the "I don't get the point of the Opening Day set" camp. Same exact cards I just bought, but cheaper in just about every way imaginable. Just my opinion. :)

Nothing like recycling 2012 series 1 card #1 for the Braun insert.

I am in the don't like camp. If you are going to put it out, make the images different.