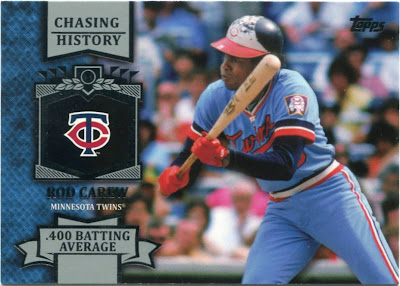 Pretty soon, the card shelves at my local Target will undergo a massive overhaul.

After a winter of seeing the same old product on display, the card aisle is starting to evolve.

Flagship has been available for over a month now. Heritage just hit the shelves. Pretty soon, we'll be seeing the likes of Triple Play and Opening Day on the market. And, before we know it, Series 2 and A&G will be up for grabs.

I expect the same thing to happen with my "blogger packs" throughout the course of the year.

For now, though, I've been sticking with the good ol' Series 1 blogger product.

In case you missed my first post on the subject, a "blogger pack" is a 2013 Topps-centric trade package that contains a slight hint of the tremendous personalized blogger generosity that we've been so prone to seeing around here.

They've been arriving in droves lately.

The first I'll be featuring today comes from Jason, author of one of the newer blogs on the block, "Greentown Cards".

He generously reached out to me via email a couple weeks ago, saying that he had a few of my 2013 Topps needs to drop in the mail.

Aren't those kinds of emails the greatest?

This powder-blue Carew was one of the definite highlights of this particular "pack". Plus, it lends credence to my argument that the "Chasing History" series should've been an all-horizontal set.

To me, the design just works a thousand times better in horizontal form.

I sure hope I'm not the only one who feels that way. 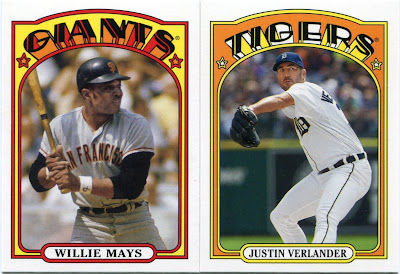 Jason also knocked a few pieces off my ever-shrinking '72 mini wantlist with his "blogger pack".

Although they "legendary" minis have been few and far between up to this point, I've found that they look terrific next to actual '72s in my binders.

Thanks to a vintage discount bin from a few months back, I was able to land a somewhat flawed copy of Willie Mays's 1972 Topps card to my collection.

Having it and the mini together under one roof is like "binder history" to me. 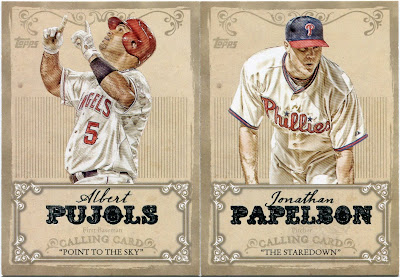 Although I wasn't too big on them at first, I've warmed up to these "Calling Cards" inserts lately.

I don't mind the guy, but it just irks me for some reason. 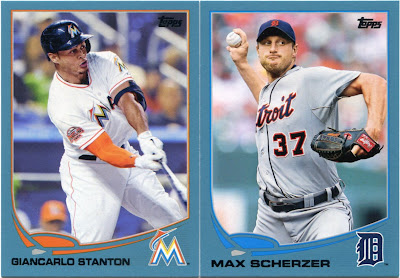 Here's what made this particular package a treasured "blogger pack".

Yes, every single card Jason sent me was indeed related to 2013 Topps in some way, shape, or form.

However, all he told me that he'd be sending along a few inserts from my wants. At no point did Jason mention anything related to the blue-bordered parallels.

Not surprisingly, finding a few Wal-Mart exclusive goodies inside this "pack" was vastly appreciated. (Wait, did I just put "Wal-Mart" and "goodies" in the same sentence?)

Jason must've read about my struggles with my inner voice. One of my "first world problems" was the fact that I had Max Scherzer's base card and Target red variation...yet not the blue-bordered parallel.

Although I've tried to tell myself that I don't care about parallels, I couldn't help but feel obligated to hunt down the blue version.

Thanks to Jason's generous blogger pack "hit", though, that won't be necessary.

"But what about the gold parallel, Nick?" 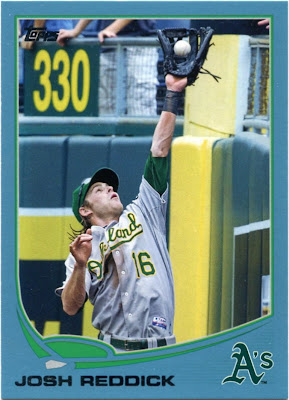 This one of fellow February 19th "birthday boy" Josh Reddick was my absolute favorite pull from Jason's pack, though.

Given our shared dates of birth, it is an honor and a privilege to find any new pieces of Mr. Reddick for my collection.

I'm not altogether sure what the odds are of pulling a "birthday boy" insert from a "blogger pack".

Probably a rare find, if I had to guess.

All I know is that this particular break managed to put a huge smile on my face. 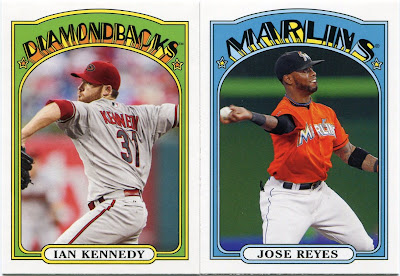 Next up on the "blogger pack" front is Weston, author of the terrific blog "Fantastic Catch".

When I first started up with the whole blogging business, I thought I was the only youngin' in the blogosphere. I went a good couple months before finding out that there were several other youthful bloggers around these parks.

Weston may well be the youngest blogger in the blogosphere, but I'd have to double-check on that. Either way, we "next generation" collectors are proud to have him on board for whatever the hobby holds in the distant future.

Finding out that I wasn't the youngest blogger around did make me feel sort of old, though.

Anyways, Weston was nice enough to contact me about a trade a couple weeks ago. When I cracked open the contents of his "blogger pack", I was happy to find a couple more hits to my '72 mini needs. 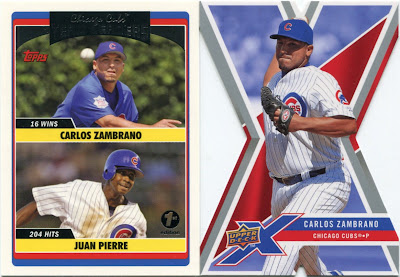 From what he tells me, I've become the new outlet for all of Weston's extra Cubs cards.

Given his Cardinals fandom, though, I'd venture a guess that all of his Cubs cards are spares.

While I'm not a team collector, I've never been one to refuse a new batch of Cubbies cardboard. Apparently, I hit a treasured Cubs "hot pack" with the ones Weston sent along.

Although they're not all that spectacular, those "First Edition" Topps parallels seem to be rare finds in the hobby. I scarcely see them pop up anywhere these days.

Which are still better odds than pulling an autograph out of a retail pack at Target. 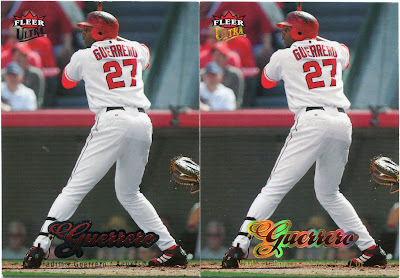 When Vlad's 2007 Ultra card fell out of Weston's "blogger pack", I immediately put it in my doubles stack.

I'd found that one in a dime box a long time ago.

After I staring at it for a few seconds, something just wasn't quite right. Maybe I didn't have it, after all. I dug through my binder "files" to check for certain.

As it happens, the one I'd owned for all these years actually came from the gold-foil-based hobby Ultra product. The regular retail version that Weston sent (on the left) had eluded me up to that point.

There's a lesson for you, folks.

You never know what you might be throwing onto the doubles pile. 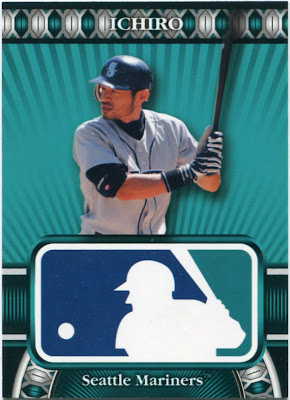 While minis and Cubbies are terrific pulls, my greatest hit out of this "blogger pack" was the very Ichiro insert you see above.

These puzzled me for a long time. I'd seen pieces from this series on a few other blogs before, but I had absolutely no clue as to what exactly they were.

Thankfully, this card proved to be awesome and informative at the same time. The back notes that these were distributed through hobby shops in 2010.

I guess that explains why I'd never known what the heck they were. As much as I might want to, I don't frequent any local card shops these days.

Needless to say, it sure made for an exciting "blogger pack" pull. 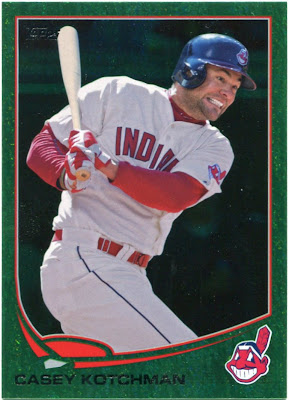 I guess you could call this next one a "local blogger pack".

Geographically speaking, I'm pretty sure that fellow Illinois-ian Jeff from "2 by 3 Heroes" is the closest blogger to where I live. I always think I'm going to bump into him at a local show.

Until then, though, Jeff has quickly established himself as one of the "PWE kings" of the blogosphere. I find envelopes from him in my mailbox on a regular basis.

His latest PWE strike contained a card I'd previously requested with this emerald parallel of a grimacing Casey Kotchman. It was a part of Jeff's recent Kotchman "hot pack", one of which I was extremely jealous.

Yes, I accept the fact that I am probably the only collector in the world who can get excited over anything resembling a "Casey Kotchman Hot Pack".

What can I say?

I've been collecting the guy since the beginning.

So, yes, I will take all your lonesome, forgotten Casey Kotchman cards.

I'm not ashamed to admit it. 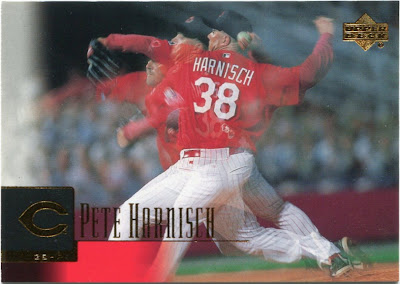 I hit a few mini-collection inserts from this latest "blogger pack".

True, I already had this one, but I still can't help but get a bit excited whenever I get a look at this masterpiece.

I've had about three or four different bloggers send me this multiple-exposure card of Pete Harnisch, one of the rare examples from UD's later years.

A few bloggers have started to try and accumulate as many different copies of a single card as possible. While I haven't jumped on board with that concept yet, this one may be a good place to start.

I think this is the fourth copy of it in my collection as we speak.

Hey, maybe I'll run into Jeff at the National this year. It's back in Chicago for 2013, after all.

Until then, though, this local "blogger pack" sure hit the spot. 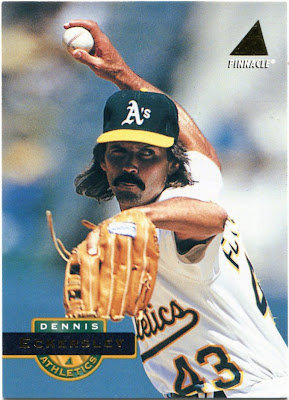 The last "blogger pack" I busted proved to be quite the game-changer.

Thomas, author of the great new blog "The Junior Junkie", was quick to respond to a plea I made in an earlier post. But we'll get to that in a bit.

Apparently, he made note of my recent "Eck-face" quip. This very grimace is featured on at least a dozen of my Dennis Eckersley cards.

Word is that the people in charge of these blogger packs are planning to devote an entire insert series to this concept in the future.

It's still a work in progress for now. 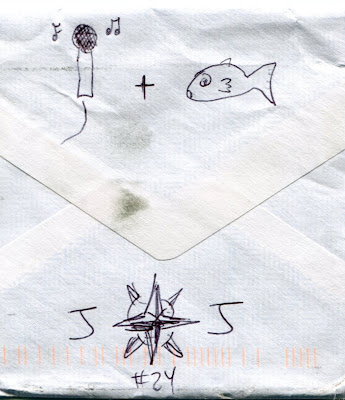 Taking from the likes of A&G, Thomas included a special "mystery code" addendum onto the wrappings of his "blogger pack", complete with his awesome logo at the bottom.

Let's see if you can crack the code. I better cue the Jeopardy! music.

Now, I can't promise any fan-tabulous prizes, but I can offer a 1990 Donruss Zane Smith and a free page of my Anthropology notes from this semester. And maybe a loose pen cap.

Here's the answer, for those of you reading from home. 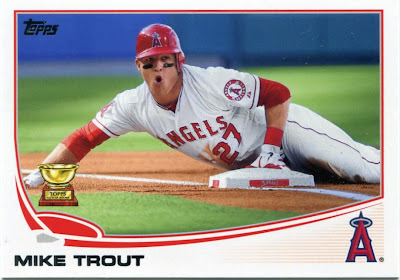 If you came up with "Mike Trout", then congratulations!

It was "Mike", which is short for "microphone", and then "Trout", as in the fish.

In all seriousness, though, I loved that Thomas added a little personal touch to the PWE he sent my way. That little "personalization" is just one of the ways the blogosphere kicks the tar out of the forums.

And, as I mentioned before, Mr. Trout was indeed a "game-changer" as far as my collection goes. But not in the way that Topps would have you believe.

No, this was the absolute last base card I needed from the Series 1 checklist. Thanks to this "blogger pack", I can now say that I am no longer in need of any 2013 Topps base cards.

Boy, that sure felt good.

"Just wait until Series 2 comes around, Nick. And then Update. You'll have a lot more base cards to chase then!"

I sure wish my inner voice would just shut up sometimes.

Nevertheless, I had a ton of fun busting this latest selection of 2013 Topps "blogger packs". Much thanks goes out to Jason, Weston, Jeff, and Thomas for this round.

It was an absolute blast.
Posted by Nick at 1:30 PM

I have those days off from work and already told my wife my plans.

Planning, and actually doing? Different sides of the coin.

The Chasing History cards has quickly become one of my favorite insert sets from the last few years. Hopefully they add in a few more Bucs for Series 2.