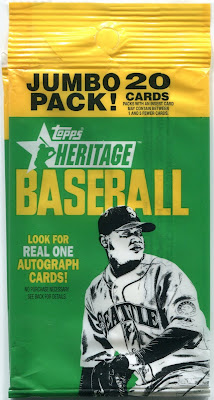 Heritage has always been one of my personal favorite brands in the hobby.

For me, the thrill of seeing recent ballplayers on classic Topps designs is something that never seems to go away.

Still, despite my excitement towards this year's Heritage release, I wasn't planning to buy any. Not for a while, anyways.

Seeing as how I'm saving up for the local mega-card show and a "spring break" trip to Vegas at the end of the month, my modest budget simply didn't allow much wiggle room for a good ol' Heritage splurge.

Yet, on Monday, I had both my cell phone and my wallet stolen from me. Luckily, I only had about five bucks of my big "budget" in my wallet at the time, but the whole ordeal still left me downright pissed off, needless to say.

While I was at the local mall in search of a new replacement phone, I couldn't help but think that a "pick-me-up" was in order.

After landing on a new phone, I took a walk to the adjacent Target in search of a Heritage "pick-me-up". Lo and behold, I found that my Target had come through again. Heritage was indeed on the shelves.

And that's how a stolen phone and wallet led to me purchasing a pair of Heritage rack packs.

I didn't want to spend the twenty bucks on a blaster, but I figured my budget could take a pair of five-dollar rack packs.

I've noticed a lot of people have been posting their "first card" from their initial breaks of the latest brands.

I'm not sure why I didn't include that in my 2013 Topps post, but I'll get back on the wagon with Heritage.

So, without further ado, my first card from 2013 Topps Heritage is... 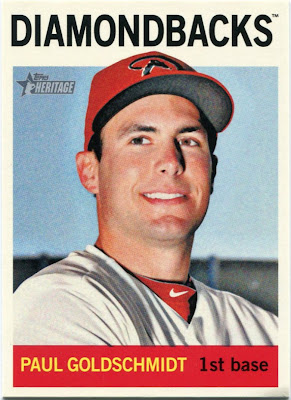 Take a bow, Paul. You deserve it.

Okay, I cheated a bit. After grabbing a few rack packs off the shelves, I saw the name "Goldschmidt" peeking through one of the wrappers. Since he's one of my newer "binder inductees", I decided that was the rack pack for me.

I really need to find a better way of opening these things, though. I always seem to bend the front card in the process. Still, since Goldschmidt is a "keeper", it doesn't matter much to me.

I'll have to try a new rack pack opening system when Series 2 or A&G come around. 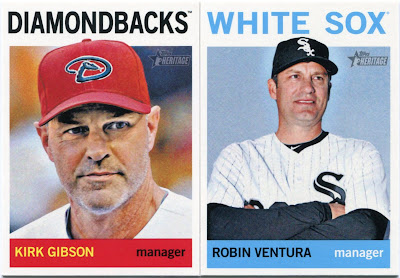 Yes, I cheated with my second rack pack as well.

The name "Ventura" was in plain sight through the wrapper of the other rack pack I purchased. And, since Heritage is really the only place to get manager cards these days, I jumped at the chance.

Although he had a card in last year's Heritage release, that "Gibby" is the first manager issue of his in my collection.

Yes, at least one collector still gets excited about manager cards in today's hobby.

I'm probably one of a dying breed, though. 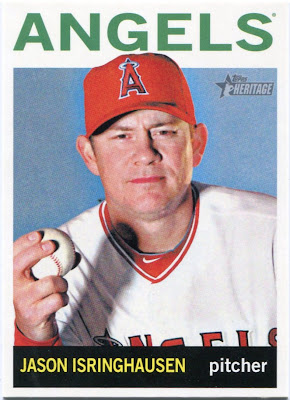 For fun, let's see a breakdown of the 40 cards I pulled out of the two rack packs.

Sure, I'm a base card kind of guy. But I would've liked to at least gotten one insert or SP out of my purchase, just for kicks.

I know I would've gotten a great deal of "Satisfaction" out of pulling the Stones card. And the Beatles one would've definitely received "All My Loving".

After all, the real draw of Heritage for me is indeed the base cards. And I did pull quite a few great ones for my binders. This likely "sunset" card of "Izzy" was one of my biggest desires from Heritage this year.

Besides, I'm sure it won't be long (Yeah!) until I get those other inserts. 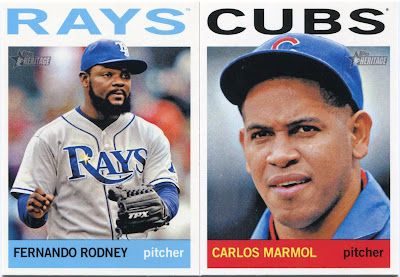 Although I know they weren't largely found in the vintage era of Topps, I happened to like the few "in-action" Heritage base cards I pulled from my breaks, as we have with the Rodney.

Plus, as addressed by the Owl himself, I really like seeing the color schemes for teams that weren't around during the vintage time of the hobby. I'm on board with the sky-blue Rays designation.

Still, while I don't like to harp on the negative with this hobby, the other side of the coin has to be addressed with this year's Heritage set.

I'm not the biggest '64 Topps fan. It's not a bad set, by any means. It's just that '64 is usually near the bottom of the pile when we're talking vintage cardboard, personally.

And, as far as the photography goes, I wasn't the first one to notice it. And I sure as heck won't be the last.

But it needs to be said.

Too many unappealing head shots!

I couldn't help but think of the "Extreme Close-Up!" scene from Wayne's World after looking through the majority of my pulls.

I know head shots were basically the norm for Topps back in the day, but these go way beyond anything that was actually featured back in '64.

That Marmol is flat-out ugly.

But it's nothing compared to this one. 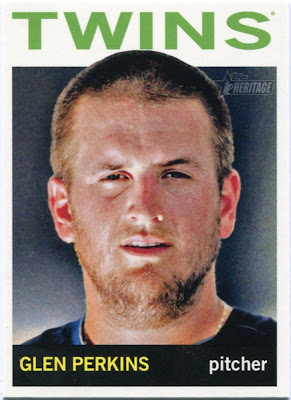 I'm sure Glen Perkins is a wholesome, normal-looking individual, but Topps managed to make him look like something out of an alien spaceship here.

Due to the likes of Perkins and Marmol, I'm starting to dub 2013 Heritage as "The Cranium Set". 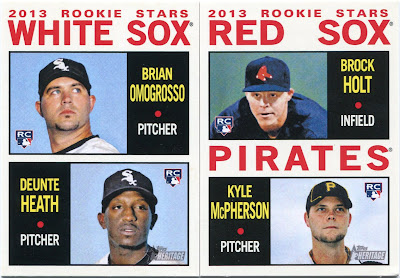 Topps never seems to get these things right with Heritage.

Some of the "prospect" cards this time around stay true to the '64 design. Although I've never been much for collecting recent rookies, I kind of like the look of the single team-themed prospect issues.

However, I'm pretty sure that the multi-teamed Heritage pieces are a "modern" creation on the part of Topps.

Since the point of Heritage is to honor a past Topps set, I'm not sure why those were included in this year's checklist. 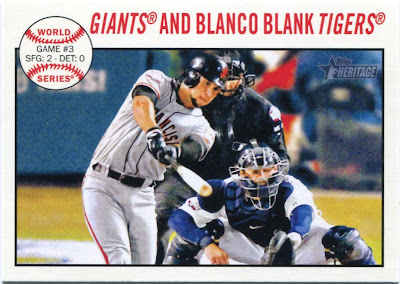 However, Heritage always manages to do a nice job with their "postseason highlights" subsets.

While the trademarks are in full bloom with these, they do little to take away from the overall feel of Gregor Blanco here. 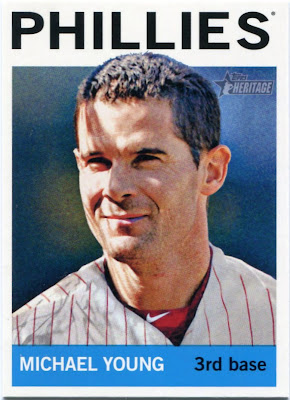 Even with all the great cards I've featured thus far, a few of my pulls managed to separate themselves from the rest.

Because, thanks to the advent of airbrushing, quite a few of this year's Heritage cards will begin new chapters within my binders.

When I get around to it, I'm sure it'll feel a little odd putting a Michael Young card into my Phillies binder.

I'm sure Ranger fans are shielding their eyes right about now. 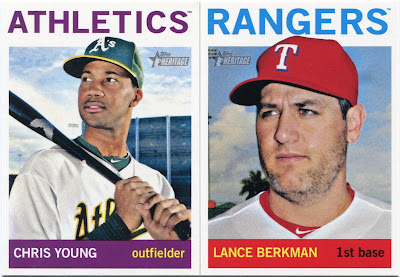 While I'm sure they'll receive a few cards in their new uniforms later on in 2013, these will forever go down in cardboard history.

A new Chris Young section has already begun in my A's binder. And a Lance Berkman-centric spot is soon to come within my Rangers pages.

A couple of historic pulls indeed. 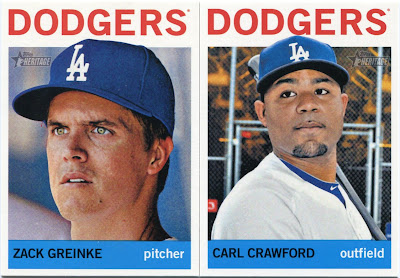 The Dodgers are sure to receive a myriad of new sections in my binder of theirs throughout the course of 2013.

New spots have already opened for the likes of Greinke and Crawford.

That Greinke card just freaks me out, though.

In fact, I've started to call it "The Exorcist Card".

Please, let's move on before the nightmares start. 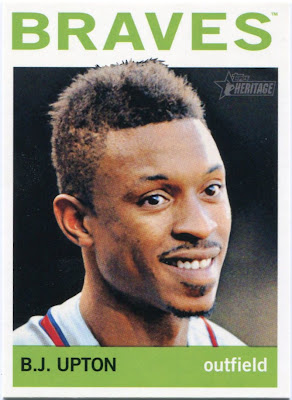 Although I haven't yet decided on a single favorite card from my breaks, this one may well take the cake.

Of course, it's the first card of B.J. Upton as an Atlanta Brave. Probably the first of many, if I had to guess.

More than that, though, I've always been a fan of strange hairstyles in the world of cardboard. I've been planning to do a post on that topic for a while now, in fact.

If I ever get around to it, I'll be sure to give this one its place in the proceedings. I believe that's what the kids call a "faux-hawk", although I'm probably the last person you'd want to ask when it comes to the hip hairstyles nowadays.

Either way, it'll make for a terrific addition to my collection.

Overall, I'm pretty much in the middle with 2013 Heritage.

Probably not a great set, but not a terrible one, either. I'm sure I'll be buying more in the future.

I'm hoping that a big dime box full of 'em pops up at the card show in a few weeks. In the meantime, I have my Heritage wants posted in my "2013 needs" section on the sidebar if anyone wants to strike up a deal.

All in all, my pair of rack packs definitely gave me the "pick-me-up" I needed this week.

Then again, I guess Heritage has always had that effect on me.
Posted by Nick at 5:49 PM

I got to start getting those. I am in agreement about the Multi-Team rookie cards, I'm about 99.99% certain the original '64 cards only featured one team with the Rookie Stars. For many years during the 60s and even a little into the 70s the Rookie Star cards were just one team cards featuring two players (occasionally featuring three. 72 would be the year they seemed to switch from just featuring 2 players to 3 players for each team) Then 74 on to I'm not sure when they did the 4-on-1 Rookie thing but instead of being just one team rookie stars they were now rookies in general from any team and the focus was the position "Rookie Star Catchers"... At least that is my take on things.

There were a couple of 64s that had N. League or A. League stars, I believe in the last series...but they didn't look like that at all.

This is my first look at the new Heritage's - They don't really look like their vintage counterparts - what gives? Is it just me?

Sorry to hear about your wallet and phone fiasco Nick. Looks like your "pick-me-up" hit the spot though. I've always had a love/hate thing going on with the 64 Topps design. Not sure about these yet...

Total bummer about your phone and wallet. People truly suck.

Can't believe you didn't get one non-base card from two rack packs. I know it's early, but collation has zero rhyme or reason for this product so far. Makes me wonder what the best purchase option is: single packs, racks, blaster, boxes??? In the end, I guess it's all a crap shoot.

Sorry about the troubles. As for the best purchase option....after market I would say. I bought two blasters and I'm not buying any more.