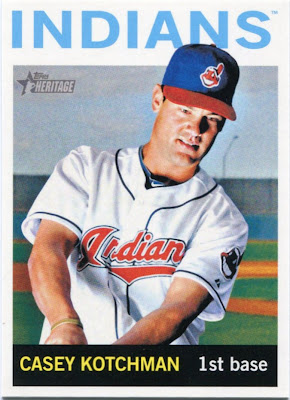 It is my pleasure to announce that 2013 Topps Heritage "blogger packs" have officially hit the mailboxes of the card-collecting universe!

Now, if you missed my first couple posts on the subject, you might be wondering what the heck a "blogger pack" is.

To put it shortly, it's a blogosphere trade package that comprises of a few cards from the latest and greatest set on the shelves. For example, this is the first Topps Heritage "pack" I've received.

However, what distinguishes a "blogger pack" from a pack at your everyday Target or Wal-Mart is that added hint of blogosphere generosity.

These "blogger packs" contain other various surprises, none of which involve the aforementioned "latest and greatest" set.

It's the best of both worlds.

The grand debut of these 2013 Topps Heritage "blogger packs" comes courtesy of blogger Pat, author of the great blog "Hot Corner Cards". He recently managed to knock out a few of my gigantic amount of Heritage needs with a recent "surprise" package.

While I can't help but love any and all Casey Kotchman cards, this one is filled with wasted potential. From the looks of things, Topps had the makings of a "bat barrel" card with this one, only to crop the "barrel action" out of it.

But, if I'm wrong with my possible "bat barrel" assessment, well...

I really don't want to know what Mr. Kotchman was doing on the bottom half of this one. 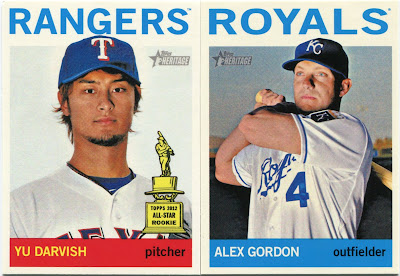 I understand the photography-based complaints with this year's Heritage brand.

In fact, I mostly agree with them.

However, I'll be the first to admit that these are a couple of beautiful cards.

It's safe to say that those gigantic rookie cups instantly make any card a million times better. And, although probably not a surefire "night card", the Alex Gordon is most likely an awesome "dusk" piece.

While the rest of Heritage might not be too peachy, Topps certainly got it right with these two. 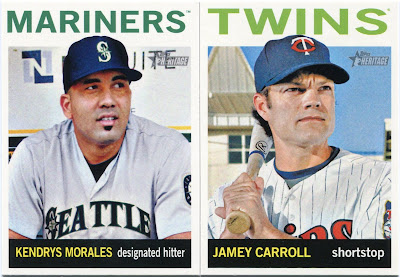 Heritage has always been great as far as player selection goes.

Neither of these guys had many cards issued in 2012. Heritage produced one of their few cards last year.

From the looks of it, both are making grand returns in the 2013 set. Morales does so in his brand-spankin' new Mariners uniform, to boot.

Given his "under-the-radar" status, finding a new Jamey Carroll card for my binders is not a common occurrence.

In a way, though, that makes his cardboard all the more special to me.

Am I the only one who feels that strongly about Jamey Carroll baseball cards? 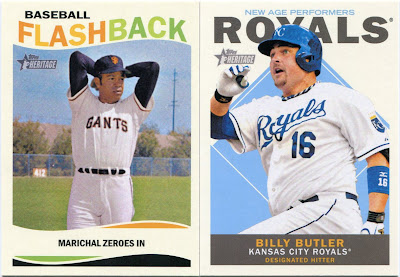 Pat was also nice enough to slide a few inserts into this Heritage "blogger pack".

These are actually just two-thirds of the total "insert power" he included. You'll see the last, extra-special one later.

For now, though, these are my first pieces from this year's "Baseball Flashbacks" and "New Age Performers" insert checklists.

While the base cards have always been my main focus when it comes to Heritage, it's always nice to land a few inserts from the product. I love that Topps has kept these pretty similar over the years.

When it comes to Heritage, change is overrated. 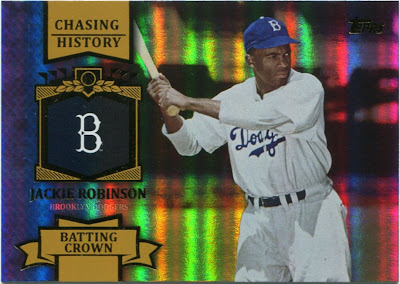 When Pat contacted me about the cards he'd be sending my way, he noted that he'd included "some other stuff I may like". I knew I was in for a treat, but I wasn't exactly sure what that "treat" would entail.

As it turned out, Pat threw in a few of my remaining Flagship needs in with the Heritage singles. He even managed to knock out my last couple "Chasing History" insert wants.

Horizontal is definitely the way to go with these things.

I think this Jackie Robinson is proof of that. 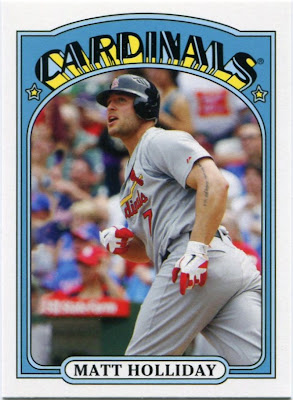 My fellow bloggers have certainly done their part in whittling down my '72 mini wants.

Pat helped hit one of my remaining needs with this Holliday.

My personal goal is to finish these off before Series 2 hits the streets. 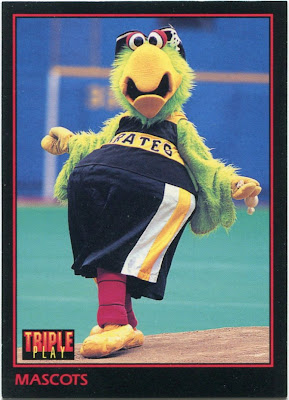 Not everything in this "blogger pack" was 2013-related, though.

Pat was generous enough to include a few gems from past cardboard history as well.

I'm not exactly sure what the odds of pulling one of these "mascot" inserts are. The "blogger pack" hit ratios aren't posted anywhere.

Whatever they are, this break landed me the "Pirate Parrot" variation.

While I'm basically indifferent towards the whole mascot aspect in the game, I've always thought they at least make for neat cards.

I've always gotten a chuckle out of them. 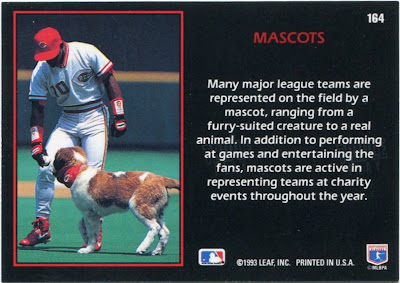 The back of this fun Donruss Triple Play piece contains one of the few canine cameos on cardboard.

I could be wrong, but I'm guessing that pup is "Schottzie", the former Reds mascot and pet of infamous owner Marge Schott.

Speaking of the Reds... 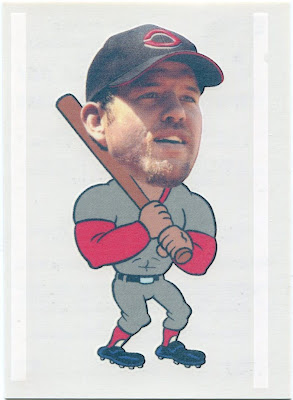 Here's a neat little "tattoo" insert out of 2004 Bazooka.

While I'm not sure that may kids actually took the time to imbed this faux-tattoo of Sean Casey onto their skin, they do make for fun inserts.

I'm not sure if they still own the rights to the name, but I'd like to see Topps revive the Bazooka brand one of these days. While it was never much of a standout set, it was a nice budget-friendly option to have back in the day.

My lone card-collecting friend (at the time) and I used to pluck reams of these things from those discounted $1.49 "power packs" they sell at Target.

I guess that's why I've always had a soft spot for Bazooka.

While not usually common for these "blogger packs", the single greatest pull of mine was, in fact, a 2013 Heritage card.

If you've read any of my musical posts over the lifespan of this blog, I think you'll understand how special this one is to both myself and my collection. 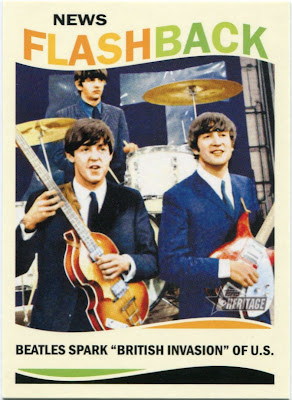 Okay, so the photo Topps used for this one isn't the greatest.

The usually-upbeat Ringo certainly doesn't look to happy back there.

And where the heck is George, anyways?

It's a baseball card of the Beatles, for crying out loud! After all is said and done, I could never be upset over anything featuring the Fabs.

They're up there with The Ramones in what looks to be an eternal tie for my all-time favorite band. I always make it a point to listen to at least one Beatles song during my walks to school each day.

Although this is a massive understatement, music would not be the same today without the influence of the Beatles.

I could go into a whole other post on that topic.

But that's probably better saved for another day.

I've completed the 10-card Heritage "News Flashbacks" insert sets every year since their inception in 2008.

While I'm still eight cards away from continuing that quest in 2013, I've already acquired the two best ones from this year's release. The Beatles and the Stones are my runaway favorites.

After browsing through the contents, I think it's safe to say that Pat put together one mean batch of cardboard.

You better look out, folks.

Heritage "blogger packs" are starting to sweep the nation.
Posted by Nick at 6:00 PM

Unless I am mistaken...that would Schottzie II. I am pretty sure the original Schottzie would have passed away by 1992.