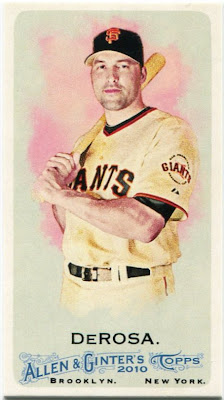 My deep appreciation for the world of binders is something I've mentioned countless times before on this blog. To me, binders are pretty much the only way to display one's collection.

I've had that train of thought for a long time now.

Over the years, I feel that my binder-centric method of organizing has taught me a few things. I doubt that anyone could ever learn all there is to know about them, but I've come to realize some of the ins and outs of binders during my time in the hobby.

Perhaps the biggest lesson I've learned is a fairly simple one.

There's no wrong way to organize a binder.

The only real goal in creating a system is making it enjoyable to you. And only you.

Everyone has different "aesthetics" when it comes to binders. And I mean everyone.

Although I didn't quite realize it until I read a recent post on Night Owl's blog, I do indeed have quite an array of my own personal "binder aesthetics".

The basis for that entire post on Night Owl's blog was built around the lack of appropriately-sized pages for his '75 minis.

Minis in general are pretty fickle.

I personally love the whole mini universe. But, whether they're from A&G or Goodwin Champions or wherever, they're not all that aesthetically pleasing when it comes to your standard nine-pocket pages. 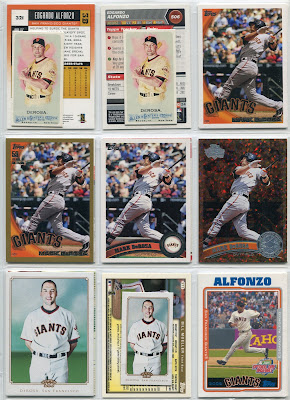 With the exception of the "invading" Edgardo Alfonzo card in the bottom-right, this particular page in my Giants binder is completely centered around Mark DeRosa.

I've had the good fortune to capture quite a few of his recent minis over the past couple years.

And, while I'm proud to have them in my collection, they don't make for an overly pleasing sight.

Although it doesn't bother me as much as most other collectors, I'll be the first to admit that minis can take away from "binder aesthetics" at times.

Yet, despite their unsightliness, I can't stay mad at my precious minis. 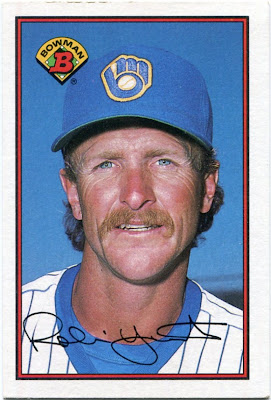 I wish I could say the same for my oversized cards.

I wish I could say that I love them, despite their overall ugliness when it comes to by binders.

Now, an obvious exception to these are my handful of beautiful early/mid '50s vintage pieces. However, I don't store those in pages. At the moment, they're acting as "display pieces" on my bookshelf.

In this case, I'm more talking about the modern side of oversized baseball cards.

Luckily, there haven't been a whole lot of them in recent years. The short-lived oversized "boom" has happily fallen by the wayside...for now.

But, like it or not, I'll always have some reminders of their awfulness in my collection. Quite a few of my "binder guys" were included in my least-favorite set of all-time.

Robin Yount is one of them. 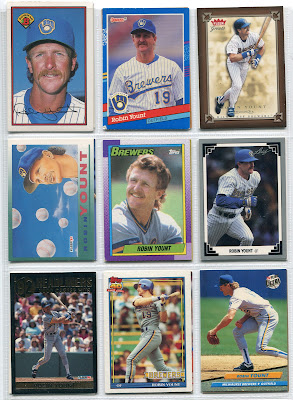 Not a bad page, by any means.

That Fleer checklist card on the left is certainly a looker. And Yount's 1991 Topps card is one of the better ones in my binders.

Yet, as much as I try, I just can't get past that ugly '89 Bowman piece sticking out of the top of the page. It's so oversized and horrendous that my scanner cut off the top of it.

Even my scanner agrees with me. 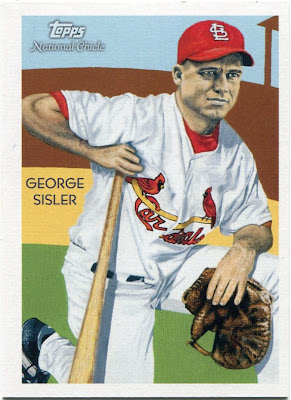 I still don't know what to make of Mr. Sisler here.

Building my collection of his over the years has been an absolute blast. The fact that George Sisler is one of the more often-forgotten HOFers has always made him a prime dime box candidate.

This, however, is easily the most fascinating card of his in my binders.

I've talked a lot about my interest in "throwback" uniforms in the past.

In their 2010 offering, National Chicle took a "flash forward" approach to some of the HOFers in the short-print checklist.

Here, we have Sisler, a long time St. Louis Brown, photoshopped into a modern Cardinals jersey.

It's definitely an interesting concept. 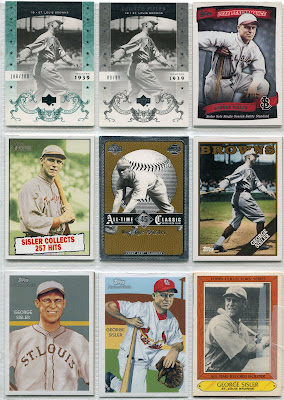 Trouble is, Sisler never played for the Redbirds.

And the Browns eventually became the Baltimore Orioles, not the St. Louis Cardinals.

As far as binders go, though, I'm still not sure what to think with this one.

Based on what I know about my "binder aesthetics", I shouldn't like it. The presence of a Cardinals jersey in my Browns binder isn't something I'd be likely to embrace.

Yet, at the same time, I think it does bring a bit of a "change of pace" to my organizing system. It's something different. Something out of the ordinary.

Truth be told, I'm still not sure how my "aesthetics" feel about it. 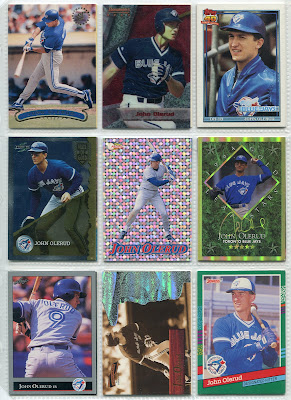 On the contrary, my aesthetic-centered self is definitely happy about this.

My "centerpieces" project should be in full swing soon. Although I haven't devoted a whole lot of time or energy to it yet, it'll likely fit into my cardboard schedule sometime down the road.

While every piece of a nine-pocket page can hold something special, the "centerpiece" of each page is where the best of the best should be. As far as I'm concerned, anyways.

Even though a few cards from this Olerud page in my Blue Jays binder had a shot at becoming the "centerpiece", I'm convinced I made that right decision with that disco-themed Pacific piece.

It really ties the page together, dude. 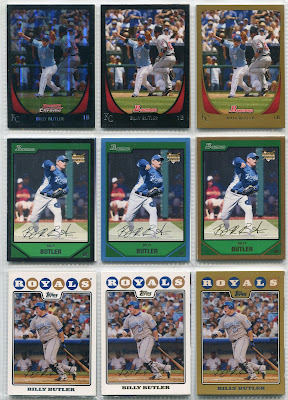 The basis behind my last big organizational project was closely tied in with my "aesthetics" as well.

You should've seen my pages before I became a blogger. They were an absolute mess. I had random parallels strewn out all over the place.

While I was proud of my collection at the time, I obviously wasn't getting the most out of my individual pages.

If Mr. Butler here is any indication, I've bettered my "system" by leaps and bounds ever since then.

Just look at that display.

If that's not aesthetically pleasing, I'm not sure what is.

In the end, I guess this whole "aesthetics" conversation is what keeps me coming back to them on a day-to-day basis.

The fact that binders allow you to mold your collection into a museum-like quality is why I'm such a big fan of theirs.

I'm a huge fan of your "binder" themed posts. One of these days you'll finally and fully convince me to make the changeover. Til then, I only keep my complete sets in binders while my player/team collections reside in boxes.

Early 50s cards and 89 Bowman for that matter fit just fine in pages. You just have get vintage pages, otherwise known as 8 card pages. Oh, and you have to totally redo how you organize since most 50s cards in your binders are probably not by each other. Sorry

RE: 50s Vintage and the dreaded Inaugural 89 Bowman = 8 pocket pages AdamE beat me to that one.