The day before Vegas: A card show report preview 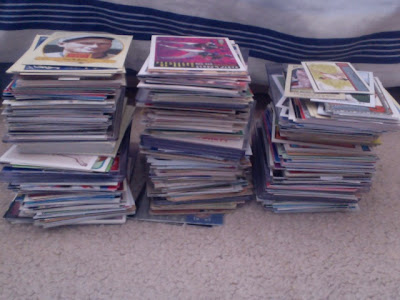 This may well go down in history as one of the greatest weekends of my life.

As you can see above, the big tri-annual card show I've been gushing about all week certainly didn't disappoint.

Although my dad and I had a slightly smaller cardboard budget this time around, we still managed to do quite a bit of damage. The final count totaled 579 cards in all.

There's a good reason for the slight dip in budget, though.

Later tonight, I'll be on a flight to the greener pastures of Las Vegas with my dad. It's his 21st birthday present to me. Most of my current funds will probably prove to be my "gambling cash" for this trip.

While I'm ecstatic to show off all my card show spoils, I simply don't have the time to do so today. Between packing and the overall pre-flight process, divulging into a long, involved mega-show post just isn't in the cards, unfortunately.

You'll have to wait until after I get back from Vegas for that. I do, however, have the time to give a slight preview of what I picked up yesterday.

In order to do so in an unbiased manner, I had my mom pick out a few cards from the stacks you see above. As you'll see, she actually ended up selecting quite the diverse group of cardboard.

So, without further ado, here's a brief taste of yesterday's treasures. 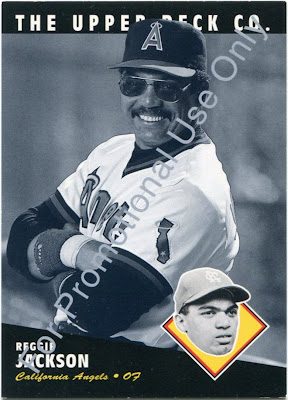 My mom selected a gem with this one.

Not only is it a neat little oddball of "Mr. October", but it fits in perfectly with the overall "promotional" theme of this post.

As many collectors probably know, Reggie Jackson was pretty much the "poster boy" for Upper Deck's early years. He was the first big star they got under contract.

Because of that, it makes sense that they'd issue a card of his to promote their outstanding 1994 All-Time Heroes release.

I doubt these were ever supposed to get onto the market. Yet, somehow, this one wound up in a 5/$1 box at yesterday's show.

I'm wondering if it's even legal to own this thing. 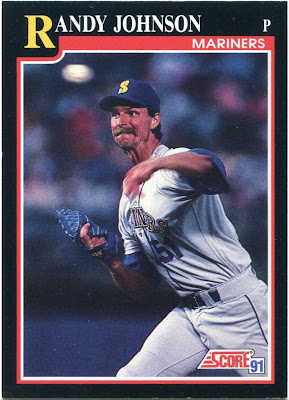 This was just one of 176 cards I plucked from a dime box at yesterday's show.

While it was far from the only one on the premises, it proved to be the most plentiful and probably the greatest of all of yesterday's dime tables.

While it'd probably be a bore to most other collectors, I had a boatload of fun digging through an entire row of early '90s Score issues. I've long thought that was an underrated time for the Score brand.

This beautiful night card of a grimacing Randy Johnson should attest to that. 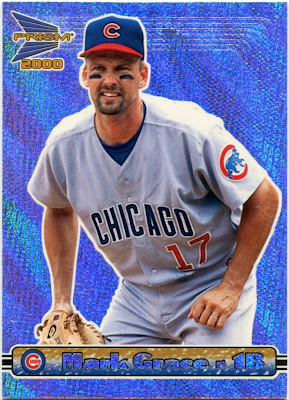 I guess it's fitting that my mom selected this one.

After all, "Gracie" is her all-time favorite ballplayer.

This particular piece came from the very same dime box as the aforementioned "Big Unit" card. I came across a bulging stack of Grace issues in the process of my "dig".

In person, the front of this one does not contain a hint of blue. Yet, for whatever reason, my scanner added the blueish shade.

Which made it about a thousand times better. 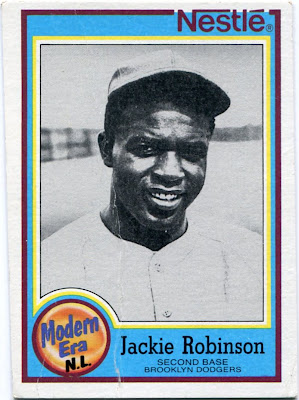 While this show usually features an ever-changing array of tables, a few vendors have cemented themselves as "regulars" over the past few gatherings.

Not only does it feature a few discount vintage bins (which we'll get to in a bit), but this particular table always has a staggering selection of 12/$1 cards.

These things are packed with absolutely everything. Everything from the '70s to the present is represented. Oddballs, HOFers, minis, all of it.

It's become one of my most-anticipated aspects of this show in recent months.

While the creases and "diamond cut" may be fairly unsightly, it's a small price to pay for an eight-cent card of Jackie Robinson.

Besides, you'd be hard-pressed to find these Nestle oddballs anywhere else. 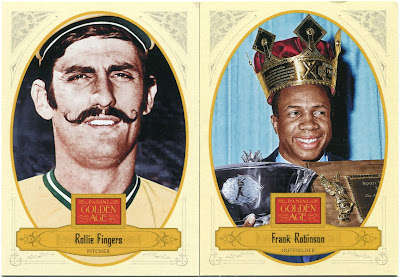 While I'll elaborate on this more in my later card show posts, the very first table I stopped at contained a glorious dime box.

Before yesterday, I'd long been on the hunt for anything from the Panini Golden Age checklist. Although I'm an avid fan of the set, I couldn't seem to find anyone with extras.

Given all that, you can imagine how happy I was to see a whole row of spare Golden Age singles in this dime box.

While my search for the individual Three Stooges cards came up short, I still managed to add a few dozen other singles in the process.

I'll show many more of these in my upcoming card show posts, but this pair stood near the top. I love the king-themed shot of "Robbie" there, an obvious homage to his Triple Crown season in 1966. 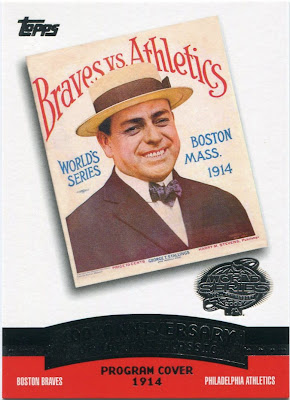 This wasn't one of the cards my mom picked from my treasure trove of cardboard finds.

I was actually the one who chose to include this one in today's "preview" post.

Okay, so I cheated a bit. But, given how beautiful these inserts are, can you really blame me?

While I've always known of and loved these Topps "World Series Programs" subjects, I've had a tough time finding any over the years. However, my dig through that 5/$1 box I mentioned earlier resulted in about four new ones for the binders.

I only hope my future card show travels can land me a few more of these stunning pieces. 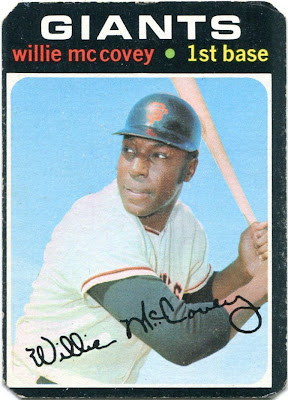 Earlier in this post, I mentioned that great table with the 12/$1 boxes also featured a terrific discount vintage selection as well.

Most notably, this vendor always manages to have a new selection of 12/$5 "oldies" on display. As you might guess, most have condition issues.

I could care less about that, though.

If I have a chance to pick up a '71 Topps Willie McCovey at that price, I'm going to pull the trigger. Even if its corners are lopped off.

It's a no-brainer for me. 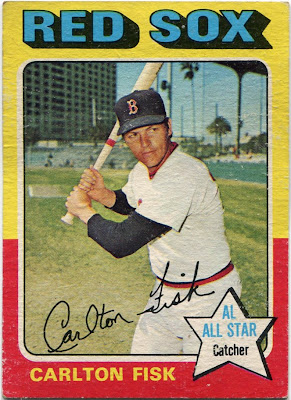 Although I didn't pick through it all that much, this same vendor also had a dollar vintage box on display.

I picked out an amazingly beautiful '50s piece from it, one that you'll see in a later post. All in all, though, I only ended up plucking three pieces from the dollar depths.

Had I searched hard enough, I might have been able to find a copy of this '75 Fisk for under a buck. I just didn't want to risk it. In the end, I gladly forked over the dollar to finally add this piece to my collection.

Anything of Mr. Fisk seems to carry a bit of a premium in the Chicagoland area, anyways. And, as it happens, "Pudge" was signing at yesterday's show as well. From what I could see, there was a long line of hopeful Fisk fans in the building.

I've never been all that much of an "autograph" guy. I'm just as happy plopping down a buck for a great vintage piece of the HOFer.

And I didn't have to wait in line for an hour to do it.

Well, that about wraps up this little glimpse into yesterday's show. I'll definitely have a lot more to post about once I get back from Vegas.

I do have a couple non-card show posts scheduled to go up over the next few days for your reading pleasure.

Until then, though, I guess I'll see you after I get back.

I'm sorry, I can't comment, I'm too busy laughing at the thought of my mom selecting cards out of my collection to show on my blog.

Have fun in Vegas and Happy 21st!

Have a great trip, Nick. I'm looking forward to seeing what else you have to post when you get back.

Awesome cards. I'll have to track down that Nestle Robinson card and the Reggie UD promo card. Have fun in Vegas!

Looks like you had a good time at the show!

Vegas...the town where it is perfectly acceptable to have your own drink in each hand. I'm not sure I would have survived turning 21 in that town.

I am definitely going to be looking at dime boxes the next time I go to a show.
And if I find anything cool....it's all your fault.

I think you found some gems with Mcovey and Robinson in Dime Boxes....I remember finding a kellogs Lou Gehrig at a show a few years back.

btw you have one of my favorite blogs. Check mine out http://truschoolsports.blogspot.com/

Have a good birthday trip to Vegas. Get into some trouble as well, this is a monumental birthday for you.

if you're a poker guy, cheap tourneys at the Imperial or whatever the hell they changed the name to haha.

oh, and stop by Ghirardelli.

Get drunk on Fremont St. and take tons of pictures, then post them all here. Or, e-mail them to me.