The power of Random, revisited 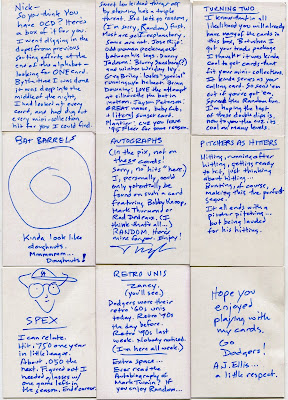 You thought the Random was over, didn't you?

Not so, dear readers.

On Friday, I featured the contents of a tremendous trade package sent to me by Ethan, a fellow Random partner in crime and author of the terrific blog "Playing With My Cards".

Little did I know what else he'd have in store for me, though. Just a few weeks after his original batch of cardboard arrived, an even larger box chock full o' cardboard hit my doorstep.

It's hard to say just how much fun it was digging through all of Ethan's finds. Not only did he manage to come up with another memorable group of hits to my crazy collection, but he did so with little hand-etched notes scattered throughout the box's contents, a few of which are featured above.

I laughed. I cried. I smiled. It may well be the most fun I've ever had in going through a trade package.

It's easy to tell just how much thought Ethan put into putting this particular group together.

And, if the cards you're about to see are any indication, there was more than enough Random to go around. 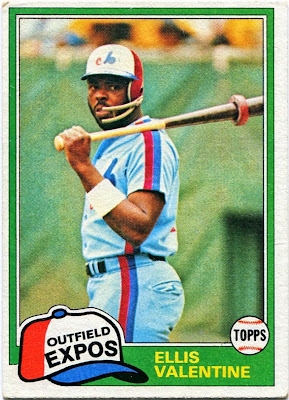 Ethan started things off by finding a card I've wanted for a long, long time.

I've always had something of an attachment to '81 Topps. This Valentine is one of the more memorable cards from that particular checklist, no doubt. Sporting what has to be one of the first facemasks featured on cardboard, it's a piece that many collectors know well.

Because of that, not owning a copy of it was a bit embarrassing on my part.

Thanks for ending that misery, Ethan. 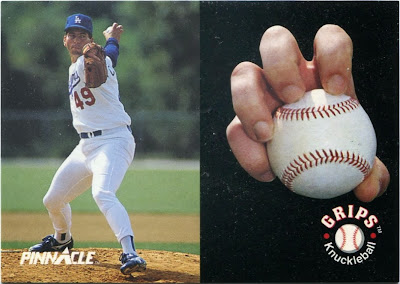 I'd hinted at wanting a copy of this card when Ethan featured it on his blog a while ago.

I've always had a deep fascination with knuckleballers. It's almost like this Tom Candiotti card was made for someone like me.

Luckily, Ethan had an extra copy on hand.

Knowing the specifics of his "Getting A Grip" mini-collection, I'm sure it's one of his favorites as well. 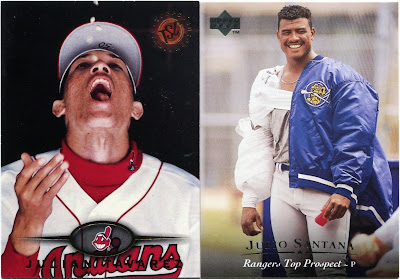 I'm not sure it gets much more Random than this.

Julian Tavarez has always been known to be kind of a jokester. That sunflower seed-based card seems to suit him well.

Minor league cards can be a huge goldmine when it comes to the power of Random. The arm of former Ranger farmhand Julio Santana looks to be hanging by a thread in that shot. 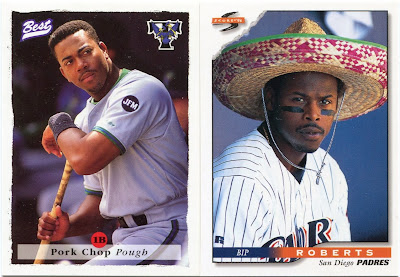 With a moniker like that, it's a shame that he never made it to the bigs. It should be said, however, that Mr. Pough (real name Clyde) spent a total of sixteen seasons in the minors and independent leagues, launching 192 dingers during that time.

In what was probably the lone sombrero cameo on cardboard, I'd long been searching for that particular card of blogosphere legend Bip Roberts.

At the least, it's good for a laugh. 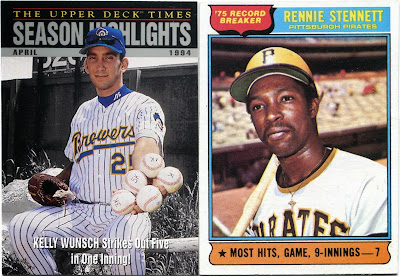 I've been toying with the idea of starting a "Not-So-Famous Feats" mini-collection lately.

Iconic moments like Hank Aaron's 755th homer or Rickey Henderson's 939th stolen base have been well-documented in the world of cardboard.

But what about the more under-the-radar accomplishments?

Those don't usually get the airplay they deserve.

Kelly Wunsch once struck out five batters in a single inning during a 1994 minor league game. It took until this 2013 trade package for me to find out about the rather impressive feat.

Rennie Stennett's seven hits in a nine-inning game is a feat that's a little more well-known. His '76 Topps "Record Breaker" issue is the first card that documents the accomplishment, though.

I think such a theme would make for a fun little project.

But that's just me. 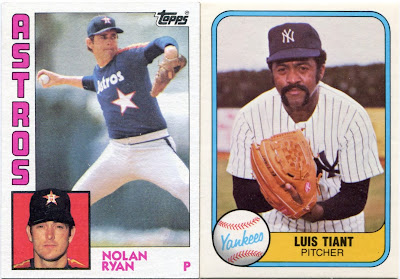 In stepping away from the more quirky facemasks and sombreros, Ethan did manage to find a few surefire names for me.

Both of these early '80s beauties are new additions to my binders. Any day I can add a new Luis Tiant to my collection is a good day.

That pretty much goes without saying. 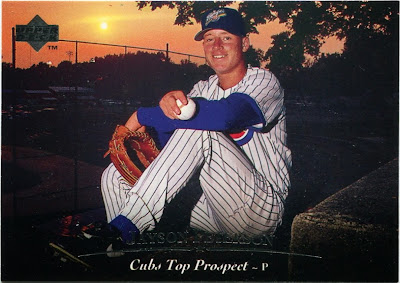 Remember what I was saying about minor league checklists being a goldmine?

Here's former Cub prospect Jayson Peterson in one of the more serene shots I've ever seen on cardboard. And, as Ethan noted, it's a literal "sunset" card.

Like Pork Chop Pough, though, Peterson never made it to the bigs.

I'm glad he got at least one moment in the cardboard sun. 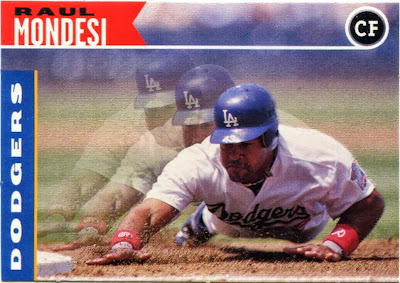 Much like the last batch he sent over, Ethan managed to do a whole lot of damage to my mini-collections this time around.

Between the design and the "multiple-exposure" shot, this Mondesi is about as '90s of a card as you'll find.

Ethan hipped me to the origins of this particular set, as it wasn't one I recognized. These hail from a Dodger Stadium "Fan Appreciation Day" giveaway.

And, as I learned this year, stadium giveaways make for some of the best oddballs. 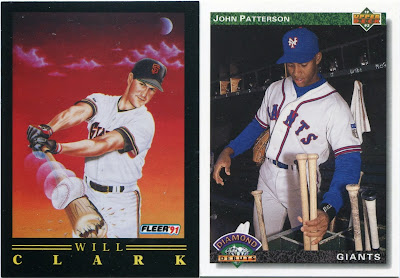 Given his Dodger fandom, I'm sure Ethan was more than happy to unload these two Giant adds to my mini-collections.

The Clark is a rather sci-fi(ish) "bat barrel" specimen. The Patterson, meanwhile, is a beautiful "throwback" shot.

The bat rack appearance really does remind me of old-time baseball. 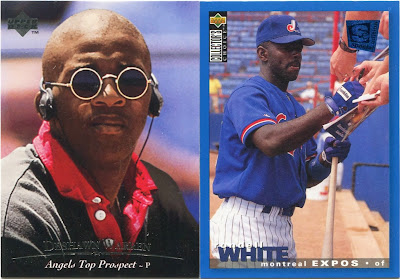 As we have with the Rondell White, "autograph" shots are always welcome around here.

But the real hero of this scan is Deshawn Warren and his epic pair of specs. Again, it's a card that comes from a gem-filled minor league set. (And, in what's becoming a running theme here, Warren never made it to the bigs, either.)

I also love the fact that he appears to be jamming to some tunes on his Walkman. Or was 1995 a little too late for the Walkman era?

I'm a little young to know. 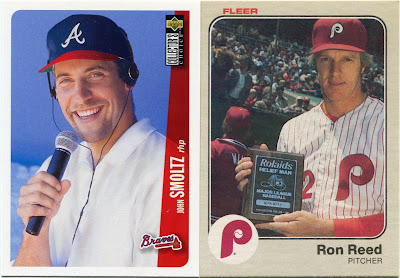 He's either singing on Braves Karaoke Night, or giving an interview. While I'd like it to be the former, it's probably the latter.

In a set that I'm starting to like a little more each day, former Phillie Ron Reed his shown holding a Relief Pitcher of the Year trophy on his '83 Fleer issue.

That's a Rolaids Relief Pitcher of the Year trophy. 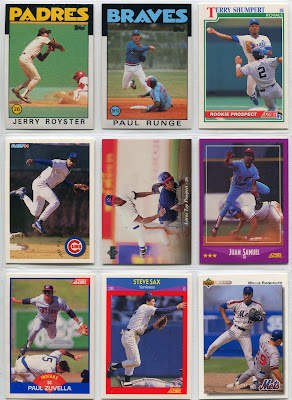 Just like the last package, Ethan sent along enough "double dips" to fill an entire page. 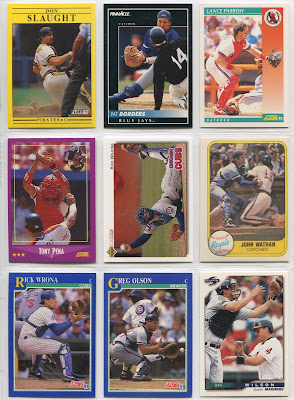 The same went for "play at the plate" shots.

Every single one of these are fantastic, although I'm especially taken with the '81 Fleer Wathan.

Given that '81 Fleer was a rather mundane set in terms of photography, it was certainly a surprise to see. 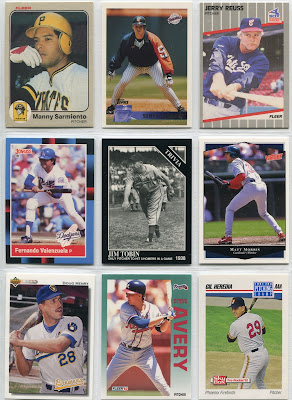 "Pitchers at the plate" were no stranger to Ethan's reaches, either.

Technically, the centerpiece of this page shouldn't be an official hit to this mini-collection. After all, Jim Tobin isn't featured with a bat there.

However, that great Conlon piece does note that Tobin was (and still is) the only modern big league pitcher to hit three homers in a single game. He did so in a 6-5 victory over the Cubs on May 13th, 1942.

What other team would give up three homers to a pitcher? 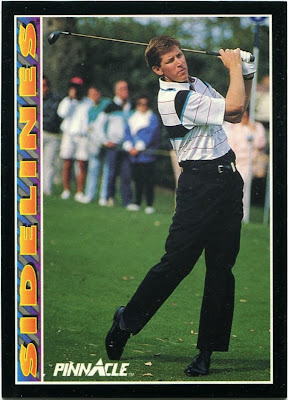 Capping things off is a rather impressive contestant in the still-running "Nerdy Hershiser" sweepstakes.

Thanks to the blogosphere, Mr. Hershiser is quickly becoming one of my favorite players to collect. He's had his fair share of neat cards. (Including at least one incredible piece.)

But, for whatever reason, card companies seemed to be intent on making the man look as dorky as possible.

Pinnacle threw their hat into the ring with this one. Golf seems to require some, let's just say, interesting attire. Or, as Happy Gilmore said...

"If I saw myself in clothes like that, I'd have to kick my own ass."

That pretty much tells the story of this card better than I ever could. Plus, I get the feeling that there's still some "Nerdy Hershisers" I have yet to discover.

As long as people like Ethan are around, I'm sure the world of Random will be my paradise. In fact, he probably said it best in the comments of my last post.

Sending the cards is worth the fun of reading your posts alone. How? When? Why? Who knows? But the Random shall strike again when you least (or most) (or more or less) expect it...

I suppose that wouldn't be random enough.