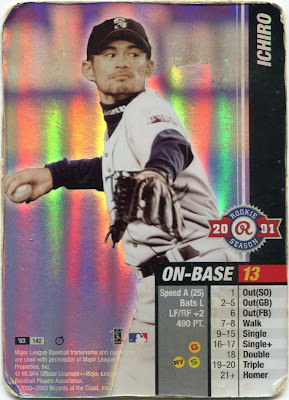 I bet most collectors were sucked into the world of sports card games at one point.

Although I can't say I've ever played it myself, Strat-O-Matic was the thing for kids in the '70s and '80s. From what I've heard, the game was wildly addicting and about as realistic as it got back then.

In fact, I remember reading once that Keith Hernandez packed his Strat-O-Matic before leaving for his first minor league camp. It was that popular among baseball nuts.

I grew up in an era of card games. For better or worse, though, it was more fantasy-themed, as Pokemon and Yu-gi-oh dominated the industry. While I dabbled in those for a short while, the card game that I fell in love with was MLB Showdown.

My dad and I played countless numbers of games while I was growing up. I bought pack after pack after pack of the stuff as a kid. It's why cards like this Ichiro are such iconic pieces of my childhood.

As one of the better players in the game, he was the leadoff hitter for many an MLB Showdown squad back in the day. That meant he was on top of my rubber-banded team rosters, which explains his extremely well-loved nature. (Kind of like the '52 Andy Pafko of MLB Showdown.)

While it was never insanely popular, MLB Showdown did have its heyday in the early 2000's. And I'm starting to worry it'll be the last sports card game that gains any type of steam.

For about the last half-century, the hobby has repeatedly been intertwined with the world of gaming.

It's a facet of baseball cards that has always fascinated me. 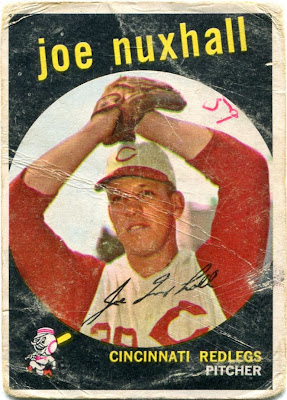 Overall, the 1950's did see its fair share of cards produced for gaming purposes.

The often-forgotten '51 Topps Blue Backs come to mind. Unfortunately, I still don't own any "game" cards from the '50s. (Although I am looking to change that sometime soon.)

Still, while I can't say I own an official part of the gaming fad of the '50s, I do own a couple cards that survived what was probably the most popular game at the time.

I think it's pretty obvious that my '59 Topps Joe Nuxhall was involved in quite a few flipping or tossing contests in its early life. A card doesn't have that much character by accident.

Like Strat-O-Matic, I've never tried flipping myself. It pretty much died out before my time. But it sure seems fun. 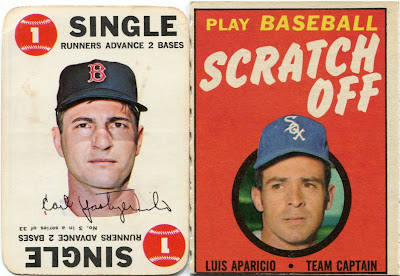 As Strat-O-Matic began to near its peak in the mid-to-late '60s, more and more game-themed cards started popping up at Topps headquarters.

Of course, pieces like these make for great oddballs. And, for the most part, they can be had for very little. Which is perfect for a discount vintage fanatic like myself.

Those 1968 Topps Game issues have been of particular interest to me lately. From the looks of it, the game's instructions are pretty self-explanitory. Although if someone like "Yaz" only nets a single, who would warrant a homer?

Cards from the 1970 Topps "Scratch-Off" series originally contained a booklet of unscratched squares as its setup. Each little box would have results like "Fly Out" or "Single" underneath. If two kids had enough cards, a nine-inning came could be played.

But I'm sure it was still a lot of fun for youngsters back then. 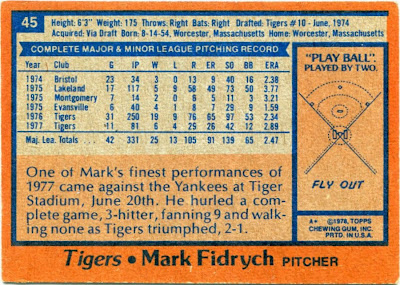 Although they're repeatedly overshadowed by other '70s flip sides, I've always liked the '78 Topps backs.

Clean, complete stats, interesting bios. They had the whole package.

And, hey, they even had a game included on the back. By this time, the card itself was the main draw. But I'll bet at least a few kids tried a couple games once these '78s hit the shelves.

Apparently, "The Bird" here was only good for a fly out. 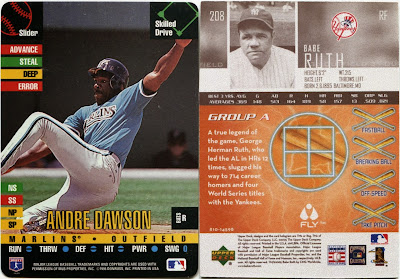 Games in the '80s and early '90s were almost non-existant.

As evidenced by the MLB Showdown era (as I like to call it), a few gaming products resurfaced around the millennium.

Donruss released a one-and-done set called "Top of the Order" in 1995. I rarely see or hear about them these days. And I have absolutely no clue how to play it.

Later Topps Total issues also had some sort of game on the back. As much as I love the brand, though, I never gave it a shot. I was probably too invested in MLB Showdown at the time.

Even with greats like "The Babe" in its checklist, Upper Deck's forgotten "Flyball" brand never got all that high off the ground.

Oh, and in case you're wondering, I never learned how to play that one, either.

Again, MLB Showdown probably got in the way. 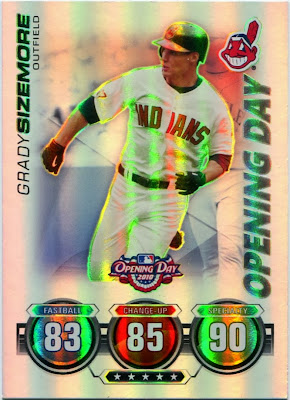 The same goes for Topps Attax.

Sadly, I've never seen anyone take even the slightest interest in these. To be honest, Attax looks like it could be kind of fun.

Still, I vividly remember seeing the same box of these at Target over and over again when they were released. And I'd always see the same packs sitting there again and again. No one bought these things.

Topps tried to push the issue by inserting these into their regular Flagship and Opening Day brands. Most people merely dismissed them as filler.

Yes, I still unearth my MLB Showdown squads every now and then and have a few "exhibition" contests. No matter how old I get, it'll always be in my system.

For the most part, though, I'm worried that the era of real, actual card games is all but over. At least as far as sports go, that is.

Video games are the big thing nowadays. Me, I'm more interested in having tangible objects be a part of my hobby. I guess that's why I'm such an avid card collector.

And that's probably the reason I'm still in full support of card games. I don't want to see them leave.

I hope the games go on forever.
Posted by Nick at 6:04 PM

Awesome post, Nick. I played Magic: The Gathering through high school and my first couple years of college, but never got into the side of sports gaming. I have never even heard of Donruss Top of the Order, but I'll have to see if I can track down any cards from the set.

I think the one thing that really kills baseball ccg's is the relative inflexibility. While games like MTG or Pokemon can integrate new strategy elements to keep gameplay fresh, baseball is a game that has basically had the same rules for a century. The game makers have to find a way to translate that to an interesting game, without having the ability to shift or alter the actual structure of the game.

It would definitely be cool to see Wizards or someone else take another crack at it though.

'78 Topps, we played the hell out of that thing. Full tournaments.

There were way more doubles and HRs than your average game.

I played Attax with my two youngest daughters when it first came out in '09. They actually liked it. In fact, they asked about it again the next year, but being a veteran of Strat-o-Matic, Pursue the Pennant, Diamond Mind, etc., it bored me too much to play often. Plus the girls grew up. But it's always cool to have these functionally fun baseball card options.

I've always liked baseball games, even if I rarely had someone to play them with.

When I was a kid, I played a lot of Statis-Pro Baseball, which was a game similar to Strat and APBA. I pretty much played it by myself, because it was too complex to keep my friends' interest, but I enjoyed the hell out of it.

I liked MLB Showdown even though I never played it... I liked it because it had relievers and bench guys in it. I still pick them up when I find them cheap.

I have a complete Top Of The Order game, but I don't think I ever learned how to play it. I found it at a Big Lots or some other clearance-y store, so I bought it. If there's any interest, I'd be willing to learn how to play it and then share it in my blog.