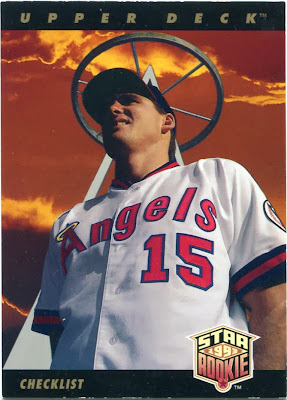 Closing out today's "Gems of Junk Wax" party is the #1 card from arguably the greatest set of the overproduction era.

I actually inducted the entire 1993 Upper Deck checklist into this theme a while back. However, in a move that's long overdue, I've decided to start nominating individual cards from the legendary set.

Thanks to some guy named Griffey, Tim Salmon is an afterthought when discussing UD's early "number ones".

But I'll be darned if this isn't one of the more beautiful pieces of cardboard I've ever seen. (I found my copy right around the time I started this blog.)

The famous Angel Stadium scoreboard halo has served as a prop for many cards over the years. Perhaps the most famous example is featured on Billy Cowan's 1972 Topps issue.

As great and vintagey as the Cowan is, though, I think Mr. Salmon here trumps it a million times over. Upper Deck pulls no punches in noting that the former outfielder was viewed as a sort of "savior" for the Angels franchise. I'd say he lived up to that label fairly well.

Like so many other "number ones", Tim Salmon was definitely a sign of things to come with 1993 Upper Deck. I'm sure you've heard many others rave about how awesome the set is, so I probably don't need to go into it now.

If you ask me, I think it's quite a heavenly way to end my self-proclaimed "Gems of Junk Wax Day".

Get ready to unearth a few more treasures next time.
Posted by Nick at 6:58 PM

How have I never seen this card before. A great start to an even greater set.