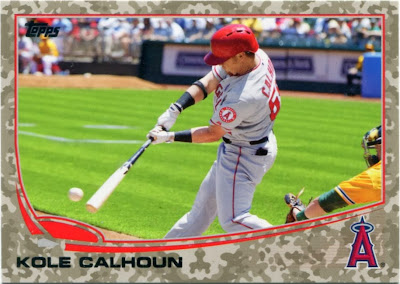 There used to be a time when inserts and parallels were a major force behind my pack-busting habits.

Base cards have almost always been my main focus, but inserts and the like were held in the same regard for a while. Even if I'd had nearly all the base from a given set, I'd still buy more packs in hopes of pulling a sweet parallel or something.

Things have changed these days. I can still fall in love with an insert here and there, but base cards are pretty much what drive my current collection.

To some, splurging on a box of cardboard for merely base isn't worth the money. To me, though, they're the sole reason I've continued my tradition of busting a box of Update for seven years now. (I hope that came across in my last post.)

Admittedly, I did pull a few inserts and parallels that made me do a double-take.

While Kole Calhoun is one of the few players I don't collect, this is the very first camo parallel I've held thus far in 2013, limited to just 99 copies. I normally don't like the camouflage (ahem, Padres), but it works well on cardboard.

That said, it's for trade if anyone wants to give Mr. Calhoun a good home. 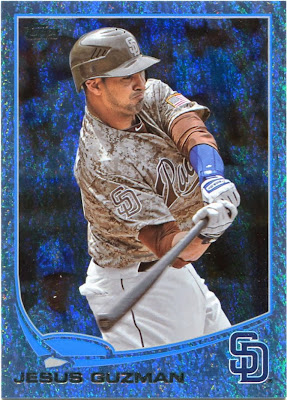 Numbered to just 25 copies, this sapphire foil Jesus Guzman parallel is one of the rarest cards I've ever pulled.

As I found out, this is actually a card from Series 2. But, with Topps being Topps, they decided to throw all 990 cards into their Update sapphire checklist.

Around five years ago, I would've flipped over this pull because of its sheer rarity. In the present day, though, it's barely a blip on my radar. 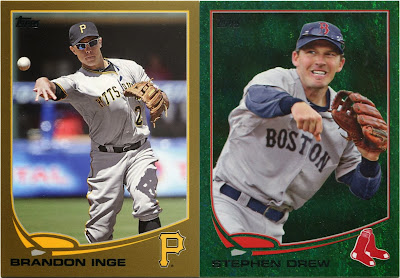 Believe it or not, I did end up pulling a few parallels of guys I actually collect.

Brandon Inge was one of the more surprising Update inclusions. The Buccos released him back in August, yet Topps granted him what'll probably be his only card as a Pirate.

Although he played only 50 games in 2013, Inge has received two Flagship issues this year.

The other, as you might recall, is one of my personal favorites of the year. 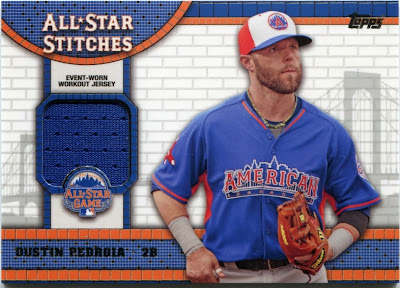 Much like inserts and parallels, there was a time where I'd froth at the mouth in hopes of pulling a jersey card.

Again, though, times have changed. Here's a recollection of my thoughts upon pulling this Pedroia.

I was way more excited to get a base card of a guy like Neshek than an "event-worn" swatch (whatever that means) of the All-Star second baseman. 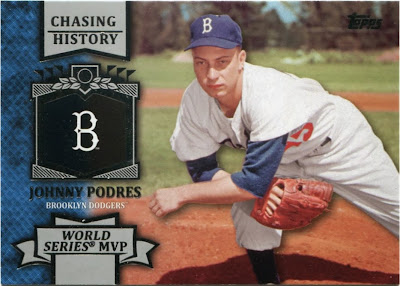 I'm glad to see Johnny Podres get a little recognition in today's hobby. 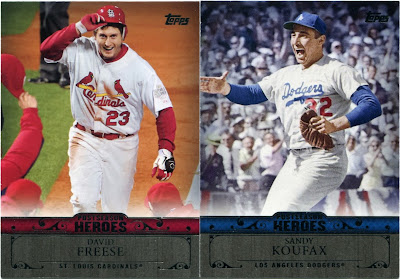 While I'm still not big on these new "Postseason History" inserts, I'm quite fond of these two.

I'll always have a special attachment to what I like to call "The David Freese Game". 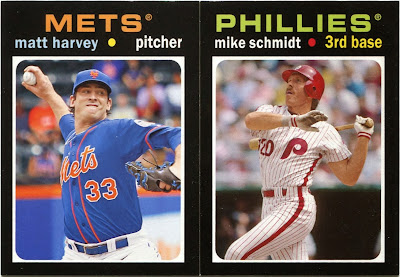 Closing up shop for my insert recap are a couple precious '71 minis.

As far as vintage goes, I like '72 Topps a tad better than '71. However, I think the 1971 design translates a little better into mini form. I'm not quite sure why. 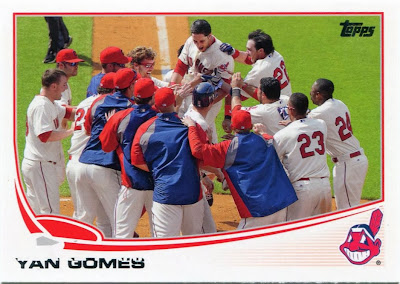 Speaking of fun, let's get back to the base cards.

Yesterday, I talked about "The Three Hallmarks of Update". All-Stars, rookies, and guys in new uniforms.

Over the last couple years, though, a fourth hallmark may be wedging its way into the set.

Throughout my break, I found myself constantly awed by the photo selection on Topps's part. I stared at each of the cards in this post for a good amount of time during my bust. It probably took me longer to open this box than any other because of that very fact.

Yan Gomes here was definitely a "stop-and-stare" piece of cardboard. Walk-off shots are quickly becoming a go-to thing with Topps. I'm a big fan of this one in particular because it looks like Gomes's Indian teammates are about to hoist him onto their shoulders. 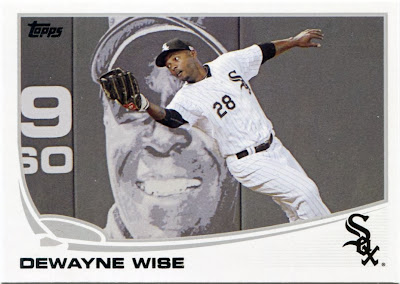 Thanks to the star-studded outfield wall at Sox Park, Minnie Minoso makes a rare cameo on Dewayne Wise's base card.

And, yes, I still call it Sox Park.

None of this U.S. Cellular Field BS. 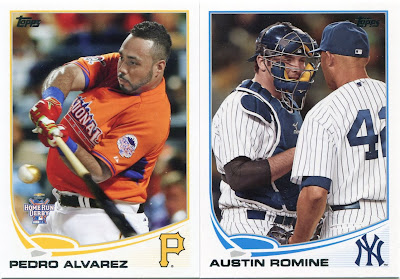 Speaking of cameos, "Mo" makes a nice one there on Austin Romine's Update issue.

It took until a second or third viewing to notice the gold ball on the Alvarez. I don't know much about the Home Run Derby, admittedly.

I do remember that the gold ball only makes an appearance when a player has nine outs agains him. Any homers hit after that trigger a nice donation to charity.

Now that's a concept I can get behind. 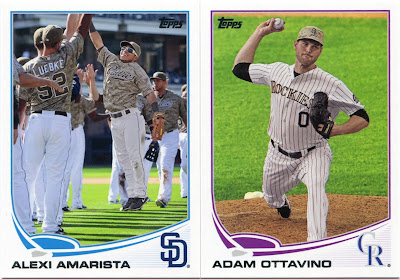 I'm sure you've seen the Amarista on other blogs by now.

Topps poked a little fun at the infielder's short stature. At just 5'8" and 150 pounds, Amarista carries about the same proportions as I have.

Only he's a big leaguer. And I'm not.

I've always been fascinated by guys who choose to wear #0. Al Oliver is probably the most famous of the group. Current Rockies reliever Adam Ottavino is the first person to wear #0 since Kerry Robinson did so in 2003.

I'm sure Rockie fans are glad to see a card of his on the market. 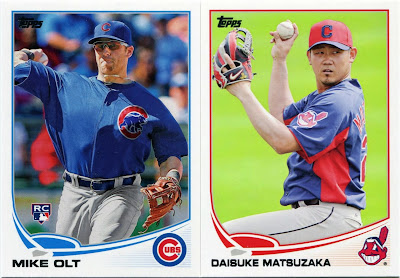 As of right now, both of these are precious "zero-year" cards.

I sure hope the Olt doesn't stay that way. I was a little shocked to see him included in the Update checklist, as he didn't make an appearance with the Cubs in 2013. I'd count on that changing next year, though.

The "Dice-K", though, will most likely be a permanent "zero-year" inductee. He was released by the Indians before ever pitching for the big club. Matsuzaka would later latch on with the Mets for his only seven appearances in 2013.

I'm not quite sure why Topps decided to grant "Dice-K" a spot in 2013 Update. It just doesn't make much sense.

If it results in a "zero-year" card, though, I can't complain. 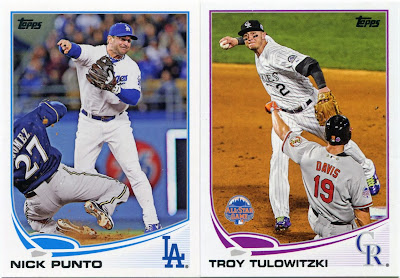 Here's a glimpse of a couple nice "double dip" shots.

I'm glad to see him back. 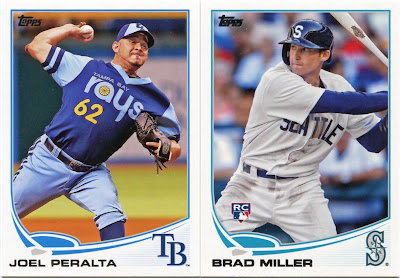 One of these throwbacks is real.

The other is not.

Want to take a guess at which is which?

Sure, the fake '70s throwback promotion by the Rays may be a bit gimmicky. But I love the goofy jerseys nonetheless. I've been wondering when we'd finally get to see one on a baseball card.

While the Mariners didn't become a big league club until 1977, Brad Miller is actually wearing a throwback that dates all the way back to 1909. It's an homage to the old Seattle Turks minor league franchise.

In fact, I'm almost positive it was taken during the same game... 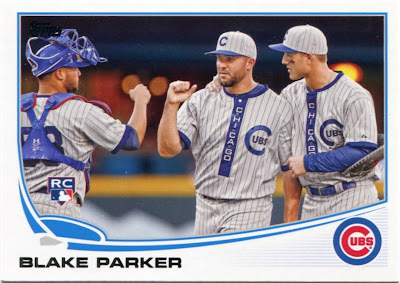 ...of what is quickly becoming one of my favorite "throwback" cards ever.

Both the Cubs and Mariners featured 1909 retros during a FOX Saturday afternoon game on June 29th of this year. I remember Starlin Castro hitting a first-inning home run, which is a feat in and of itself given his performance in 2013.

As seen here, Blake Parker got the save in the 5-3 Cub victory. I remember it well.

Parker probably isn't a name many non-Cub fans know. But, thanks to this card, it's nice to see him get a little attention around the card community.

Flanked by Welington Castillo and Anthony Rizzo, he's featured here in some of the best retro duds I've ever seen. This card is definitely one of the new kings of my "throwbacks" mini-collection.

No doubt about it.

All things considered, I couldn't have asked for more out of this product. Just like in years past, my box of 2013 Topps Update left absolutely nothing to be desired.

Each and every pack was a thrill.
Posted by Nick at 5:30 PM

I would love to trade for the Pedroia jersey.

Glad to see the "Little Pony" Nick Punto get a Dodger card. He is a free agent and may not be back in LA. This may be his only card in Dodger Blue.

Glad to see the Amarista getting more love - I've already posted it three times on my blog, I think it's a little overkill. Still great.

Love the Dewayne Wise card as well, that's one that I pulled and said, "need it!" Glad to know who the guy in the background is. The Mariners throwback and Neshek's card also fell into the "need it!" category.

I'm not a huge fan of all the solid-colored border parallels, but the camo borders look a lot better than I thought they would. Speaking of camouflage, that sapphire Guzman looks VERY awesome.