The power of Random 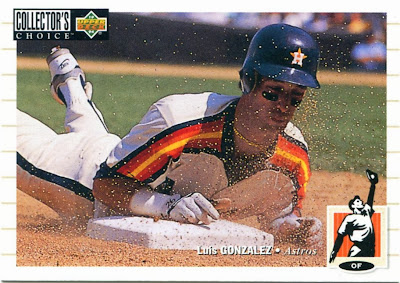 My English teacher probably wouldn't be too happy with me right now.

I capitalized the word "Random" in the title of this post, a no-no in the world of grammar. If this were an English paper, there'd probably be a big red mark running through that capital "R".

That's the thing, though. This isn't an English paper. It's my blog. And, because of how much it means to both myself and my collection, the word "Random" is one that deserves to be capitalized.

Just ask fellow blogger Ethan of the awesome "Playing With My Cards". He's a self-proclaimed "devotee of the Random". He and I share a lot of similar interests when it comes to this hobby, and we've become fairly good blogger buddies as a result.

In fact, we recently completed our very first trade, unleashing a whole lot of Random on each other in the process. Ethan mentioned that many of the cards you'll see in this post came from one of his Craigslist buys. I still want to do something like that one of these days.

If this trade was any indication, Craigslist might just be a great channel for the Random.

Kicking things off is a great shot of "Gonzo" eating some dirt at what appears to be Wrigley Field. 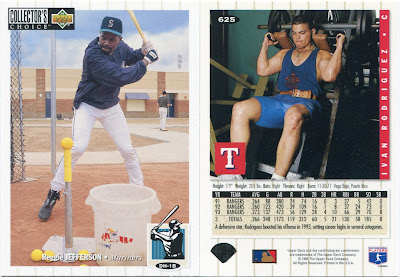 Keep Collector's Choice in mind as you go through this post.

It'll become a running theme. As I've mentioned before, the brand is a vastly underrated reservoir of great cardboard. Not to mention a terrific source for the power of Random.

Random can be anything you want it to be. It can be Reggie Jefferson hitting yellow baseballs off a tee in front of what looks like my former high school. (The back gives a different angle of the same hitting session.)

It can even be "Pudge" Rodriguez pumping some iron in the weight room. 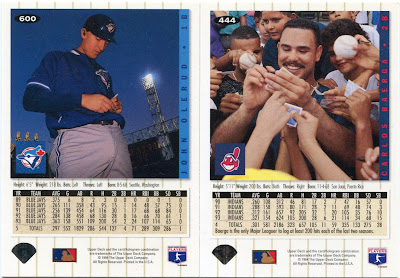 As expected, Ethan was a natural when it came to hitting my many mini-collections.

This package was absolutely filled with them.

Featured here are a couple flip side "autograph" shots, again courtesy of 1994 Collector's Choice. That Baerga is the definition of a swarming band of autograph hounds.

Nothing about that John Olerud "autograph" shot struck me as unfamiliar. At least not until Ethan wondered what was going on, um...below the surface with Mr. Olerud, as he pointed out in the note he included.

I sure hope that's just a cup. Actually, forget it.

I don't want to know either way. 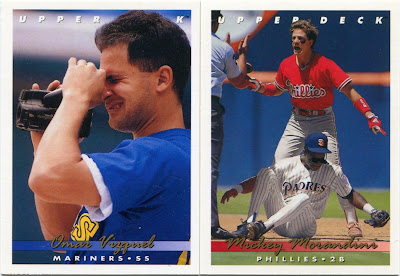 Here's a couple more from the mini-collection department.

That's Gold Glover Omar Vizquel hoisting an early handheld video camera. And, in a terrific "Say the Magic Word" shot, Mickey Morandini looks to be pleading his case to the second base umpire. What makes it for me is the ump's hand gesture. 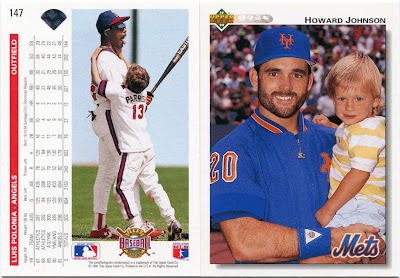 The "Ho-Jo" is one of those cards that I've seen quite a few times, but somehow never tracked down. It's awesome to finally have one in my collection.

Meanwhile, we have Luis Polonia in the process of getting choked to death by who I assume is Lance Parrish's kid.

Shots like that are definitely good for a smile. 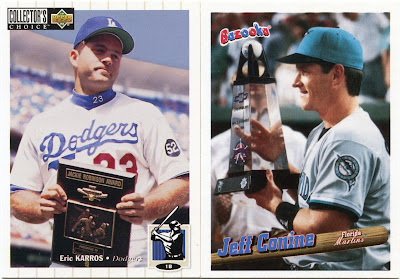 I'm so glad I decided to start collecting these "Award Show" pieces.

There aren't many out there, but they sure make for neat cards. Mr. Karros there is hoisting the first Jackie Robinson Award I've ever seen on cardboard.

And, in an neat night shot, Jeff Conine is proudly showcasing his 1995 All-Star Game MVP trophy.

Still, these wouldn't be the end of the mini-collection fun. 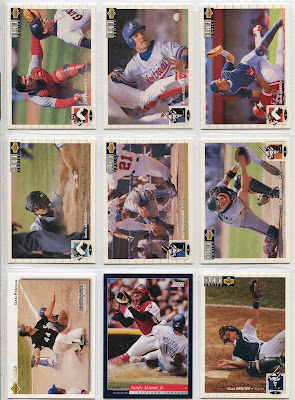 Ethan sent along so many "plays at the plate" that I had to feature them in a whole page.

As you might have noticed, seven of the nine featured here hail from '94 Collector's Choice. 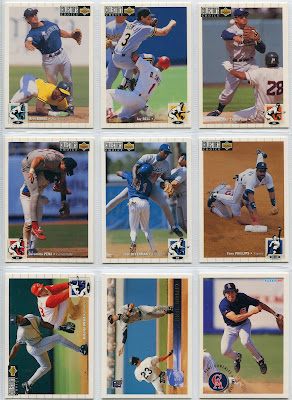 Seven of these nine "double dip" shots come from the very same checklist.

As I always say, you can never have enough "double dips". 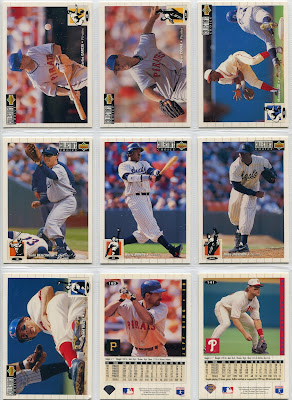 All nine of these tremendous "throwback" shots come from 1994 Collector's Choice.

Personally, I think the cool Barry Bonds centerpiece is the best of this bunch.

As Ethan noted, that's probably the only time you can put "cool" and "Barry Bonds" in the same sentence. 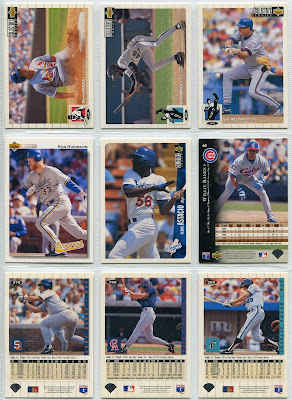 Finally, six of these nine "pitchers at the plate/on the basepaths" cards come from the greatness that is 1994 Collector's Choice.

I knew it was a great set before Ethan's unleashed all of this Random onto me, but I had to idea it was this great.

There's just so many awesome cards in a checklist that's basically all but forgotten these days. 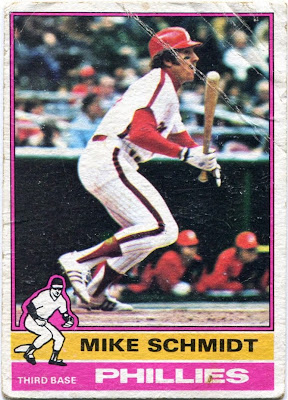 But, in an act of tremendous generosity, he also included a dash of glorious vintage to this trade package.

See, Mr. Night Owl was nice enough to send Ethan a whole bunch of vintage "packs" a while ago. Since a few were doubles, however, Ethan volunteered to pass along some of those to me.

Among the highlights was this fairly well-loved 1976 Mike Schmidt, just the third solo card of the HOF third sacker. 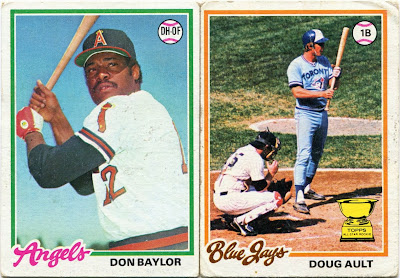 Others have better spoken to the chilling undertones of the Ault, so I'll point you towards those posts for now.

Knowing what I now know about him, I think it has to be considered one of the iconic cards of the '70s. 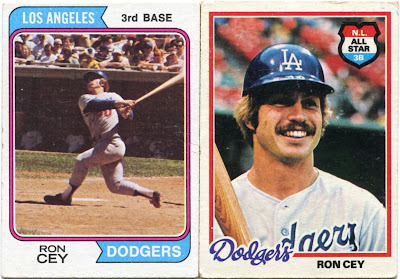 I've been on the hunt for a '74 Cey for about as long as I've been blogging.

Thankfully, the search is finally over. 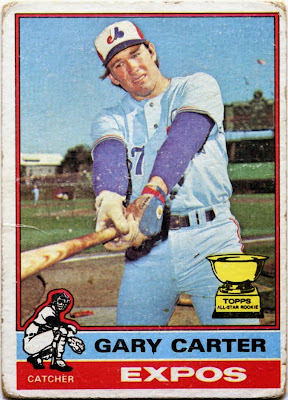 This, though, was the unquestioned king of Ethan's Randoms.

It's one I've desperately wanted ever since I decided to start collecting the late Gary Carter last year.

Though it's not a rookie card of "The Kid", it is his first solo issue. And, although it comes from '76 Topps, a little research hints that the photo was actually taken in 1974, the only season Carter wore the unfamiliar #57.

Oh, and it just so happens to feature one of those awesome '70s Rookie Cups.

And did I mention the beautiful Wrigley Field backdrop?

All things considered, Ethan managed to put together one of the better trade packages I've received during my blogging career.

The fun never ends in the world of Random, folks.
Posted by Nick at 4:16 PM

Lance Parrish was on the Angels at that point. Larry was retired by then.

Sorry (/you're welcome) for not commenting so much lately. My pea brain's pod is filled to capacity with Dodger drama.