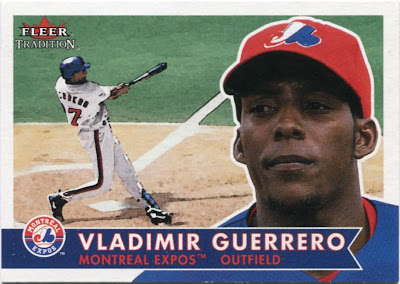 As of right now, my Vladimir Guerrero collection stands at 695 different cards.

It's easily the most cards I own of any one player. I can't tell you exactly how that many Vlads managed to fall into my hands, but I'm certainly proud of it.

Still, it's not the sheer number of cards that makes it such a treasured part of my collection. Each of those 695 individual pieces are special. I make sure to browse through them every so often just to appreciate my cardboard tribute to Vlad.

A couple years ago, I might've said differently. There's a good chance I would've told you that the 695 cards as a whole were the most important thing. I mean, 695 different Vlads!

Back then, I walked the thin line between accumulating and collecting. I'm sure it's one we've all faced from time to time. It's easy to stockpile cards without ever really appreciating them. That's basically what I did for a while.

I concentrated on how many cards I could find, rather than how special the cards I was getting really were.

I'd brag about coming home with 800 cards from a show before actually looking through them. It was the wrong way to collect.

Heck, it wasn't even collecting. 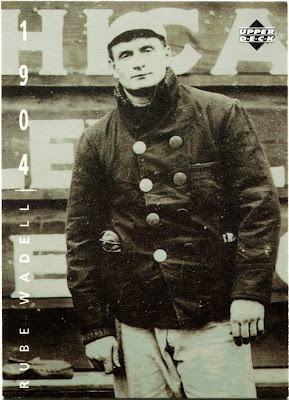 Sometimes, you have to look past the numbers.

Sure, I may own 695 different Vlad cards. But I'm just as proud to have a grand total of five Rube Waddell pieces in my binders.

Waddell, a rather eccentric turn-of-the-century star, isn't that common when it comes to cardboard. The fact that I've managed to track down five cards of his is rather surprising.

I've taken the time to absorb the magnificent old-time shot featured on the front of this one many times in the past. The back even mentions the HOF hurler's quirky passion for wrestling alligators.

Way back when, I might've lamented the fact that I only had five cards of Rube Waddell.

Now, though, I'm proud to own anything of the guy.

They're among the five most special cards in my collection. 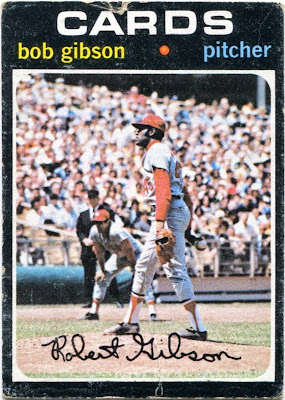 As I mentioned before, I'd always brag about finding an insane amount of cards from the shows I attended as a young collector.

That'd be the first point of topic with me.

Not, "Look, I found this cool Bob Gibson card! And this neat new Brooks Robinson!"

I still come home with a hefty amount of cardboard from shows these days, but that's more due to an increased budget. And possibly a little more customer savvy. And I always take the time to appreciate every single card I buy.

It wasn't always like that. As I keep saying, I got caught up in the numbers. I'd stray away from buying two-dollar vintage, reasoning that I could have twenty dime cards for that same price.

Obviously, with my dime box mindset, that can be a reasonable way to look at things. But not all the time.

I can't bear to think of how many awesome vintage gems I passed up simply because I wanted to add a few new dime cards to my collection. Ten-centers are awesome, but sometimes you have to sacrifice a few in order to make way for other pricier pickups.

Thankfully, I've come to my senses. I'm not afraid to shell out a couple bucks for a single card, as did with this sweet two-dollar '71 Topps Bob Gibson.

It was definitely the right choice. 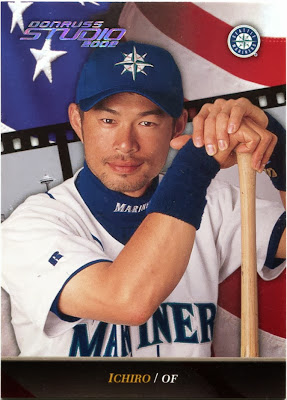 True, there is a little bit of accumulating within every collection.

I'll give you that.

After all, my Ichiro collection is currently at 481 different cards. There's no way I could've reached that mark without a little accumulation.

What sets the two apart, though, is a rather simple idea.

Appreciating your cardboard is the most important thing. Find little quirks that make them special. Absorb the stat lines on the back. Ponder why a Japanese star like Ichiro would be set in front of an American Flag backdrop.

I'm not sure I really started appreciating my cardboard until I became a blogger. I was really just a shell of my current collecting self before I found this place. For the most part, I was a simple accumulator.

As I've learned, there's no sense in collecting the whole if you can't appreciate the individual.

I like the way you look at this subject. I tend to both accumulate and collect and can appreciate both the peaks and valleys of both points of view.

I have 676 (close but no cigar) different Todd Helton cards and am looking forward to eventually getting over 1000 unique Heltons. However, I am just as thrilled that I am getting my first Adam Ottavino card in this year's Update set and that I found 1981 Fleer Clint Hurdle in a pack recently. Just another reason to love this hobby.

I guess I tend to accumulate. I still primarily only pick up cards with the intention of getting them autographed. This has changed a bit over the past year or so. Now I'll find myself buying a card just because it's cool.

A big part of why I collect is my OCD issues and my fascination to sort... and resort... and sort again. I also enjoy completing sets, which often get shoved into boxes and shipped off to my parent's house.

With that being said... I use my blog and website to flip through my collection every now and then and appreciate cards that I've obtained over the years.

At this point in my collecting, I'm much more of a collector than an accumulator. eBay and COMC really makes that possible. I still buy packs and repacks occasionally, (there's still the lure of the unknown), but buying things you know you want is more financially efficient and ultimately more rewarding for me. Much less buyer's remorse.

Don't feel bad about a little accumulating...there's folks in the record collecting world with like 50 copies of the SAME album!!....now THAT'S nuts!!