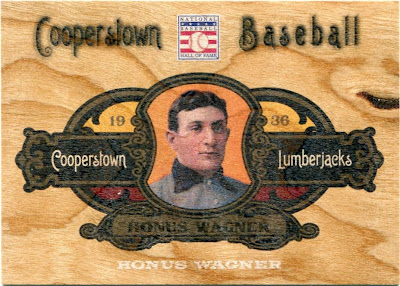 One of the recurring themes over this blog's history has been the repeated generosity of my dad.

As I've mentioned before, he was one of the many kids who collected cards in the '70s. His love for the hobby and baseball in general was passed down to me during my upbringing.

I'm honestly not sure if I'd still be in the world of cardboard today without his support. Since I haven't had any card-collecting friends since about 8th grade, my dad has always been the one I've gone to whenever I feel like showing off a new find or two.

Of course, he's helped me out a great deal in terms of finances as well. I wouldn't own many of the cards I have without his support in that regard. Even after I finally landed myself a job, my dad is still quick to treat me to some cardboard.

He generously bought a few packs of 2013 Panini Cooperstown during one of our recent Target runs.

As I've mentioned before, I think $4 for these six-card packs is a bit high. That doesn't mean there aren't goodies to be had, though. Quite the contrary, actually.

The neat Honus Wagner "Lumberjacks" insert you see above was probably the best pull of the day.

Its wood-like finish is more than appropriate for an insert set with a name like that. 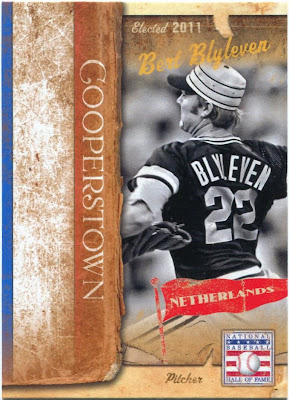 As another blogger has noted, you don't see too many cards of Bert Blyleven in Pirates gear these days.

That, coupled with the terrific design of Cooperstown's "International Play" series, made this one a nice surprise.

It's still hard to believe that any big leaguers have come from such a non-baseball country like the Netherlands.

Much less one of Blyleven's caliber. 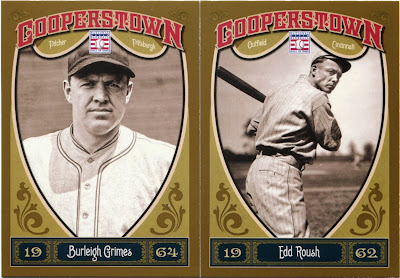 There were some nifty base cards to be had as well.

Continuing with the inadvertent Pirate theme of this post, that piece of spitballer Burleigh Grimes is just my second card of him with the Bucs. (The other, unsurprisingly, hails from the Conlon brand.)

Edd Roush is one of baseball's more forgotten Hall of Famers, if such a thing is possible. Perhaps his most infamous feat was getting tossed out of a game for falling asleep. 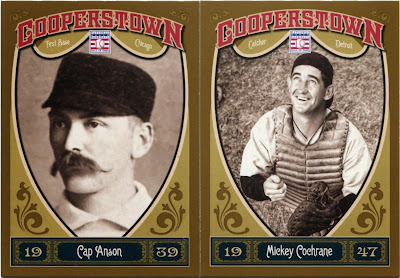 He also sported one mean mustache back in the day, I must say.

While Cooperstown is more based on big names than anything, there are a few nice photos in the checklist.

I love the overhead shot they went with on Mickey Cochrane's card. 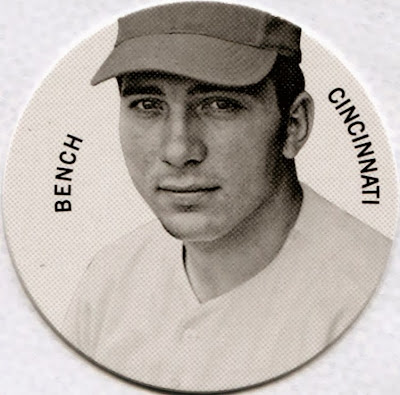 As you might already know, each retail pack of Panini Cooperstown includes one of these "Colgan's Chips" inserts.

The original version of this series was released from 1909 to 1913, packaged with round pieces of bubble gum.

It's certainly an odd set to honor in 2013. I'd never even heard of them before Cooperstown came around. That's what makes these things so darn cool, though.

The chips I pulled from my dad's surprise purchase were Eddie Plank, Rollie Fingers, and Johnny Bench, who you see above.

As neat as these are, though, I couldn't help but wonder how awesome it would be to own one of the real things. I said as much in an offhand comment while I was ripping these packs open.

Of course, something like that would be way out of the price ranges of both my dad and I. 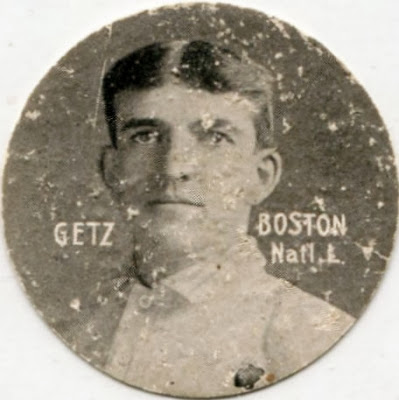 Just a couple weeks after he treated me to those Cooperstown packs, my dad proved to have an even bigger surprise up his sleeve.

He actually found an original Colgan's Chips card for me.

I'd never even seen one of these things in person before, so the thought of actually owning one was way beyond comprehension.

Apparently, my dad found the beautiful piece you see above off an online seller for around ten bucks. It was a deal he couldn't pass up. According to pops, all the other Colgan's Chips he'd seen were priced at around $75 a piece, at the lowest.

Why this one was so cheap, I'll never know.

The originals are considerably smaller in comparison to this year's reprints. They're only a tad bigger than a standard quarter, and are quite flimsy to the touch.

It's been about a week since my dad bestowed this amazing piece onto me.

That is friggin' SWEET!

I love this year's Cooperstown set. Like you, I wish the price were a bit more reasonable.

My dad knows very little about cards and hasn't bought any for me since I was like 10, but if I want advice on sink parts, I know where to go.

Cool! Most of the cards I have from when I was a kid were bought for me by my Dad.

Very cool of your dad to track down the real thing for you.