On the brink of a return 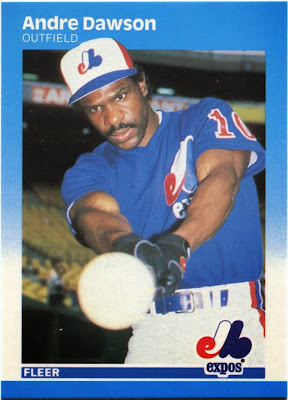 While I'm not proud to admit it, I need to get something off my chest.

Time has not been on my side lately. While trading with my fellow bloggers is one of my absolute favorite things to do, you can probably count the trade packages I've mailed these last couple months on one hand.

Even with a time crunch, there's no excuse for that. So, since my schedule should be opening up soon, I'm preparing for a grand return to the trading market.

I'm hoping to mail out a few "just because" batches to some unsuspecting bloggers. On top of that, I know I owe quite a few people some cards for past packages.

Fellow collector and reader Mike is one of those. He sent me a terrific array of cardboard a while ago, yet I still haven't sent anything back his way.

Mike, if you're reading this, I plan to correct that very soon. It's the least I could do for all the goodies you sent me.

Among those treats was the above Andre Dawson "bat barrel" shot, one that's actually a glossy parallel from '87 Fleer. As you might know, these types of cards are the basis for one of my mini-collections.

It's about as picturesque of a "bat barrel" photo as you'll ever see. 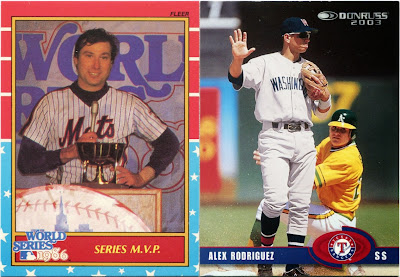 Fleer's "World Series" subsets are home to quite a few neat cards.

They're not all that easy to find, which made the inclusion of that Ray Knight even more of a surprise. Best I can tell, it's a combo mini-collection hit. The former Met appears to be giving an interview and showing off his World Series MVP trophy in the same shot.

Under normal circumstances, Alex Rodriguez would never see the light of day on this blog. But such a neat Senators throwback isn't an everyday sight.

So, for now, I'll suspend my hatred of A-Rod in honor of that fine piece of cardboard. 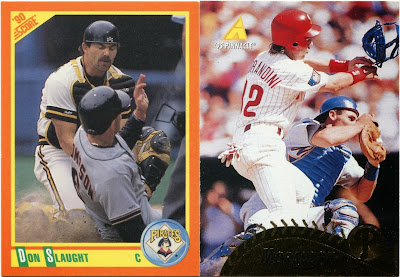 Mike also threw a few terrific "plays at the plate" into this batch.

I'd have to go back and check, but it sure seems like Mickey Morandini received a fair share of cool cards during his career. 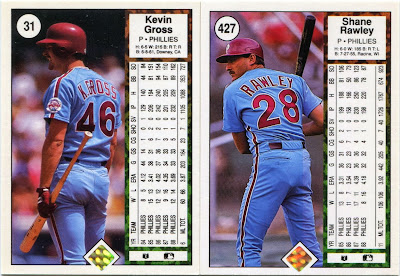 Here, we have a couple flip side Phillies "pitchers at the plate", both courtesy of 1989 Upper Deck.

As the first set to ever feature photos on the backs of cards, '89 UD certainly got their money's worth with these two. 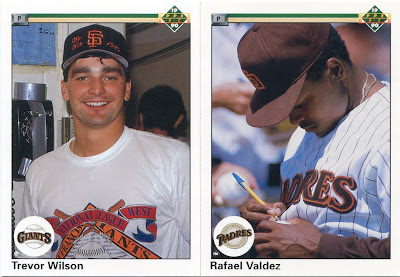 The following year of Upper Deck was far less flattering, although these are still a couple of neat pieces.

I especially love the lurking rotary phone behind Trevor Wilson. 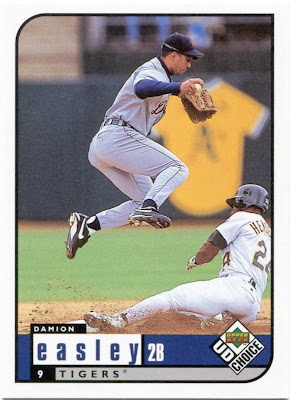 This is one of those debatable "double dip" shots.

It certainly looks like Damion Easley wanted to turn a double play here, but I'm not so sure he did. I mean, the ball is still clearly in his hand. Nevertheless, I'll probably still classify it under the "double dip" category.

I'll get back to you once I figure out exactly what it is. 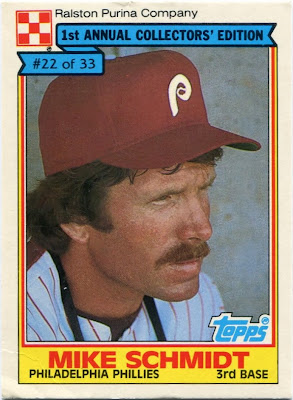 Mike also dug up a few player collection hits for me as well.

I recently topped the 100-card mark with Mike Schmidt, something I think is pretty impressive considering I only decided to chase his cards this summer.

Even if the combination of animal food and cardboard still seems a little strange, I'm particularly fond of this Purina oddball. 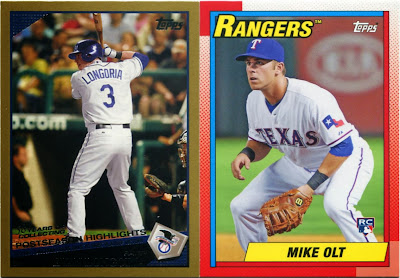 From the looks of it, Mike still seems to be an active member of the hobby.

After all, these are a couple of more recent Topps issues.

Mr. Longoria there was yet another pleasant surprise. Admittedly, I've been a sucker for gold parallels ever since I got into this hobby.

The Olt rookie is a fine addition to one of my newest player collections. As the main piece of this year's Matt Garza deal, I'm hoping to see the third sacker with the Cubbies in 2014.

Call me a homer, but I think it's a swap that'll pay huge dividends for the Cubs in the near future. 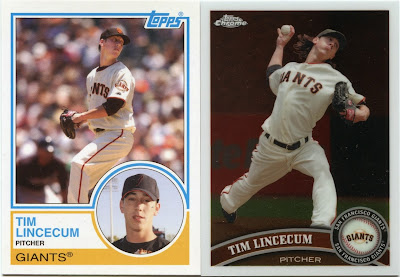 Here are a couple cards of a guy who just signed a fairly hearty contract.

At two years and $35 million, I think the Giants may have overpaid a bit. Even so, I'm glad Lincecum will be staying in San Francisco.

At this point, it'd be hard seeing him in any other uniform. 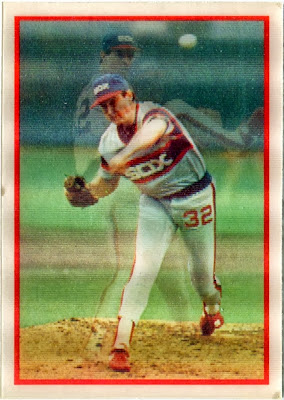 Mike struck pure gold with this one.

My eyes literally widened when I saw "Lefty" fall out of the mailer. It's a card that resonates on so many levels.

It's a great add to my Hall of Fame collection, for one. Carlton pitched all of ten games for the White Sox in 1986, which makes it a prime "Short Term Stops" addition as well.

This one hails from the Sportflics brand, one that I've always classified under the oddball category. So it's got that going for it, too.

Oh, and since many of Carlton's other cardboard finales came in '87, this beauty will go directly into my "sunset" collection. Before Mike came along, I thought I'd had all of the HOF hurler's final cards.

Seeing all this greatness is making me feel even worse about not having sent anything back Mike's way yet.

You can bet the Post Office will be seeing quite a bit of me over the next few weeks.

It's the least I could do for all the great people we have here in the blogosphere.
Posted by Nick at 1:30 PM

Those are some nice looking pickups. Kudos to Mike for sending those to you.

"Even if the combination of animal food and cardboard still seems a little strange, I'm particularly fond of this Purina oddball."

I believe these came from cereal boxes. I remember getting a few of them as a kid.

The link shows the set advertised on a box of Cookie Crisp.

I have another stack that is about ready to be mailed your way. Be on the lookout my friend.

Nick
The cards look even better reading on my ipad. I'm working on another batch for you. Its been a great hobby for me for over 30 years and sharing/giving/trading is the best part of it.