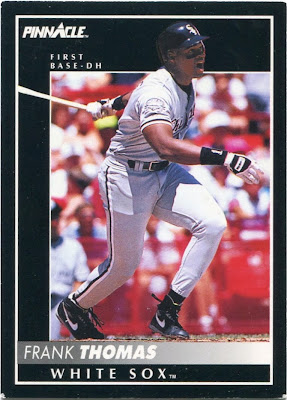 Looking back into my archives, I noticed that I'd never inducted anything from 1992 Pinnacle into my "Gems of Junk Wax" annals.

Please, folks. Forgive me for such a massive oversight on my part. I'm not exactly sure how such a thing happened, as I've always ranked '92 Pinnacle as one of the greatest sets of the overproduction era. (Not to mention the best inaugural checklist ever.)

It all started with a man they called "The Big Hurt".

The overall "darkness" theme of the set works absolutely perfectly with the color scheme of the hometown White Sox.

On top of that, there's just so much else to love about 1992 Pinnacle. I'm sure you'll see something from the "Sidelines" subset pop in this theme once all is said and done.

I'm glad Panini tried to resurrect the Pinnacle brand this year, but I think most of us could agree that it didn't quite have an actual Pinnacle "feel" to it.

I might be the only weirdo out there, but as a huge fan of '92 Pinnacle (then as a kid and now as an adult), I think that this year's rendition of Pinnacle is pretty solid. Not quite the same lightning in a bottle that it was in '92, but I definitely prefer it over most of this year's sets.

Way to go adding the Big Hurt to the GOJW

I agree. Given the licencing restraints, I think Panini's '13 effort is pretty solid. The backs of the cards don't evoke classic Pinnacle, but they did a nice job with the design of the front side.