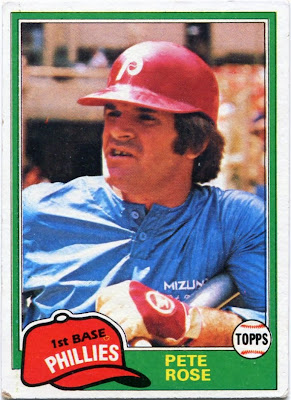 Liking a set is one thing.

I like a ton of different sets from this hobby's history. I like cards from 1972 Topps and 1993 Upper Deck. I like a lot, as you probably know if you've read this blog at all.

But being attached to a set is a whole different story.

Attachment is one of the rarest forms of flattery when it comes to baseball cards. It can only occur, I think, when the perfect blend of nostalgia, happiness, and quality cardboard presents itself.

I'd be willing to bet that we're all attached to a few sets, whether we know it or not. I know I am. Even though I'm still just 21, there are a few specific releases that take me back to my (relative) youth.

Personally, 1981 Topps is one of those. One of my earliest cardboard memories was scoring an 800-count box of the stuff at a garage sale for eight bucks. I couldn't have been more than seven or eight years old at the time.

In fact, I specifically remember sitting in the back of my mom's car that afternoon, sorting through all my new finds. Yes, even back then I was a sorting nut.

Having been fairly well-versed in baseball history at that age, one of my favorite gets at the time was what could've well been my very first Pete Rose card. Even then, I knew he was baseball's all-time hit king.

To own a real, actual baseball card of such a behemoth-like figure in "Charlie Hustle" was something else at eight years old. 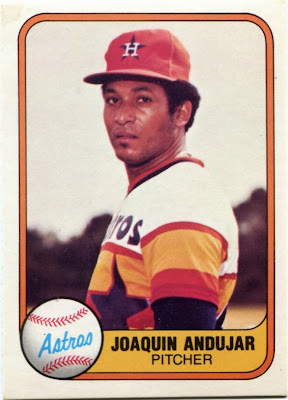 Oddly enough, I also have a strong attachment to '81 Fleer. And, again, it has everything to do with a moment from my childhood.

I've mentioned this on the blog before, but I picked up a huge stack of cards from this set at a local rummage sale as a young lad. I don't recall the exact price, but it couldn't have been more than a few bucks.

Names like Al Oliver and Joaquin Andujar and Bucky Dent stared up at me. I stared back. I was enamored. Something about having cards of these guys in my own possession struck a chord with me.

This event couldn't have come more than a few months after my big '81 Topps purchase.

I'm convinced that the both buys were the main foundation for what would become a lifelong hobby. 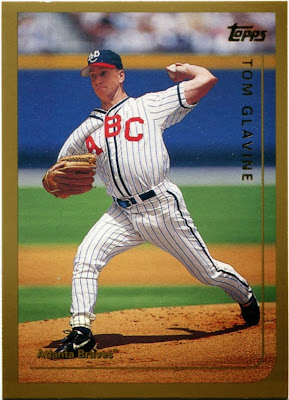 Most unbiased collectors would tell you that 1999 Topps isn't anything special.

But I grew up opening packs of 1999 Topps, so I'm not the one to ask. I am, and always will be, attached to this set.

In a fad that's long, long gone, some local grocery shops used to sell packs of cards. (I don't remember ever going to Target to satisfy my pack-busting cravings as a kid.)

Best I can remember, I bought loads of '99 Topps. The majority of those pulls are still in my collection today.

I vividly remember being puzzled by Tom Glavine's card in the checklist. What's with the "ABC" on his uniform? That's not the Braves logo!

Only later did I find out their origins, as they're throwbacks to the Atlanta Black Crackers franchise (ABC's for short) from the old Negro Leagues.

Looking back, 1999 Topps helped introduce me to the wonderful world of throwback uniforms. 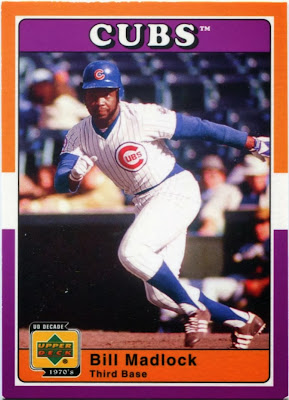 One of the first posts on this blog was dedicated to the memory of a long-lost local card shop.

Not surprisingly, that little store helped play a role in one of my attachments as a young collector.

To this day, I haven't found an LCS that offers even a fraction of the great selection this one had. Sure, there were the more expensive cards that probably paid the guy's bills at the time. But, at about ten years old, I knew I didn't have a prayer of affording any of those.

What I loved about the place was that the owner kept an eye out for people without huge budgets like myself. His store was loaded with unopened boxes of early-to-mid '90s cardboard for just five bucks.

He sold binders stuffed with cards of specific teams for bargain-basement prices. (The two binders I bought on one trip are still being used to organize my collection today.)

More than anything, though, I remember the huge box of dollar bin packs he had. I sampled quite a few different products from that box, but I always seemed to come away with at least a couple packs of 2001 UD Decade.

Now, chances are I'd love this set even without such a strong attachment. It's a great chronicle of the '70s, one of the greatest decades in baseball history.

But buying all those packs from my LCS was what cemented it in my memory. I found out about guys like Bill Madlock and Rico Carty through the checklist.

To this day, 2001 UD Decade remains one of my all-time favorite card sets. 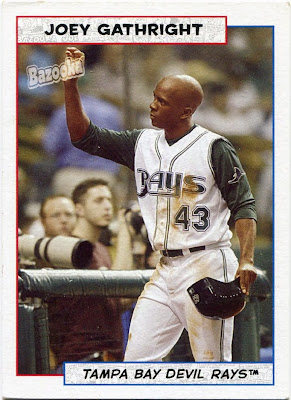 Perhaps my strangest attachment of all belongs to 2005 Bazooka.

I wasn't that young when the set hit the shelves. I was 13 at the time, just finishing 8th grade and preparing for my freshman year of high school.

And, just taking the set on its own, it wasn't a particularly memorable one. I bet most collectors barely even remember these things. (If they remember them at all, that is.)

So, then, why the attachment?

Well, I was just getting out of my year-long hockey card phase after I graduated 8th grade. Since I'd missed a full season of baseball cards, I had no idea what was going on the hobby. I needed something to re-acclimate myself.

Since they probably didn't sell too well, loads of 2005 Bazooka packs made their way into that box. Much like the dollar bin at my old card shop, picking these up on the cheap allowed me to sample what I'd missed the year prior.

But, for whatever reason, the set that stuck with me was 2005 Bazooka. I was enamored with the above Joey Gathright card, as he was an up-and-coming rookie at the time. (It's the reason I still collect the guy, despite the fact that his big league career has been long been over.)

I probably opened at least 20 packs of them during my $1.49 bin travels. Through that, an attachment was formed.

I've been in the baseball card industry ever since 2005, and I haven't looked back. As strange as it might sound, 2005 Bazooka helped mold me into the collector I am today.

Sure, I know that might sound strange to the rest of you. But that's the beauty of an attachment.

It doesn't have to make sense to anyone but yourself.
Posted by Nick at 4:15 PM

When you said attachment, I tohught "Yeah! 1982 Fleer". Then you said perfect blend of nostalgia (Yup!), happiness (Definetly!), and quality (ummmm.....)

My three biggest attachment sets are 1986 Topps, 1988 Score, and 1991 Score. I have always felt Score was the most underrated brand out there.

The set I probably have the biggest attachment to is the 83T set. I absolutely love that set and bought a ton of these packs when I was a kid. I never finished building it... but I have picked up a few complete sets over the years.

For me, it's 1995 Fleer, which is moderately embarrassing. They were a buck a pack at Kroger. Had stacks and stacks, man.

I love the '81 and '83 Fleer sets.
Had I had them back when I was a little girl and would sleep hugging them next to me.

I'm attached to a lot of the '89 sets, Donruss in particular. '95 had a lot that I loved, too, especially Leaf, Pinnacle and Stadium Club.

UD Decade set intrigues me. What a wacky set.