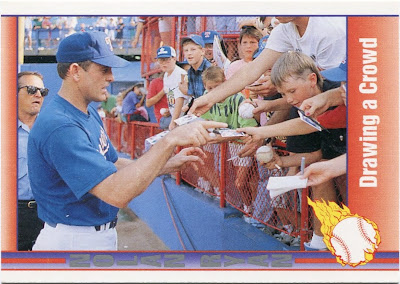 I applaud fans who can sit through a draft.

To watch hours and hours of TV where nearly nothing happens takes some patience. I've tried, though. A few times.

I've tried sitting through the first round of the NFL draft on a couple occasions. I was asleep by the time the third or fourth picks rolled around.

Since MLB Network broadcasts it, I even tried with baseball's draft last year. Although baseball is and always will be my favorite sport, I once again didn't make it past the first few picks.

Card drafts, on the other hand, are just the opposite. I've always wanted to participate in one, yet never quite had the budget to do so. That changed when Marcus over at the great blog "All the Way to the Backstop..." held one recently. Of course, his had at least one major draw.

The free/baseball cards combo always works for me. Given Marcus's Padres ties, his draft pool was Friar-exclusive. Even though I'm not the biggest Padre fan around, I still managed to find a few worthy draftees for my Friar binders.

First, though, we'll take a look at a few of the random freebies Marcus generously threw in with my card draft goodies.

It started with a nice autograph shot of the "Ryan Express" himself. 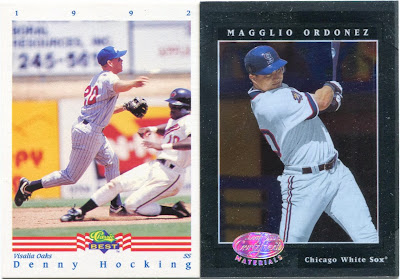 Then it moved on to "double dips" and throwbacks.

The Hocking is a rare double play shot from the under-appreciated world of minor league cardboard. 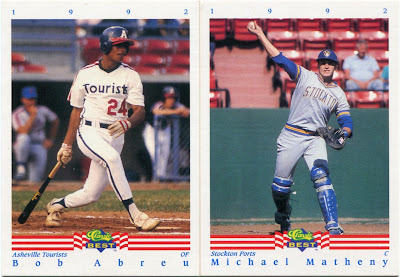 Marcus actually threw an entire stack of '92 Classic Best issues into this batch.

Future major leaguers Bobby Abreu and Mike Matheny are featured in this checklist, years before they'd make their big league debuts. That's the sort of thing you can only find in a minor league set.

Heck, after all is said and done, there's a decent chance we might be talking about Matheny's managerial career more than his playing days.

Granted, he has only managed for a single season. 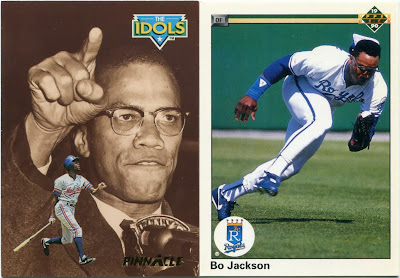 We cap off the non-draft portion of this post with a couple random gems.

Marcus sent along quite a few new Bo Jackson cards for my collection this time around, but my favorite was the '90 Upper Deck issue you see above. I guess "Bo Knows" snow-cone catches, too.

Pinnacle's "Idols" subset has long been cemented in my memory, but I had no idea it extended beyond the world of sports before that Delino DeShields/Malcolm X combo wound up on my doorstep.

It's a rare card that hits on both my baseball and historical interests. 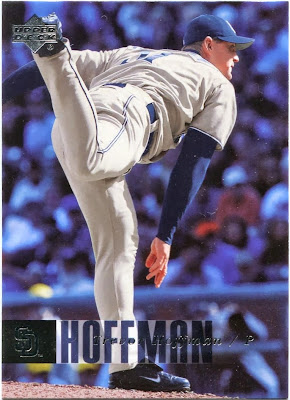 Now, though, let's get into the meat of this post.

While I was on the proverbial clock, I submitted a list of thirteen Padre cards I hoped to add to my collection. I ended up nabbing eleven of them, which isn't too bad of a percentage. And, as you'll soon see, I landed the few "biggies" I wanted as well.

This evening, it is my privilege to present the gets from my first-ever card draft to you. Hopefully, it's the first of many.

Oh, and did I mention it was free?

While I don't actively collect him, I felt compelled to draft at least one Trevor Hoffman card.

You don't need any blowhard "experts" to tell you that. 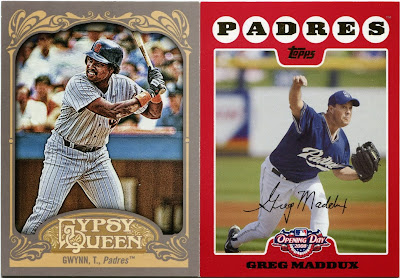 I don't own many cards of Greg Maddux as a Padre.


Given his rather forgotten tenure in San Diego, I've always felt a bit uneasy about that. After all, I do pride myself on picking up all the unfamiliar cards I can.

Plus, the "fire engine red" theme from 2008 Opening Day is always good for a chuckle.

In the past, I never chased Tony Gwynn cards with much vigor.

I'm not quite sure why. I've been doing my best to change that lately, given that he was, you know...one of the greatest hitters in baseball history and everything.

As it turns out, this Padre draft was the perfect way to make up for lost time. In what would become a running theme, I added a whole bunch of Gwynn pieces to my draft list and was lucky enough to escape with most of the ones I wanted. 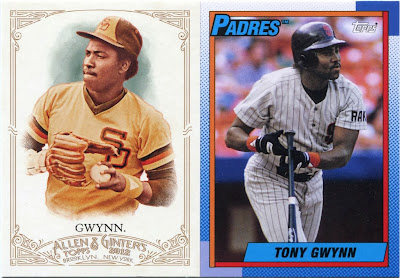 Here's a couple more from the Gwynn-mania that swept through this card draft.

As apathetic as I was towards 2012 A&G, that one is certainly a beauty. 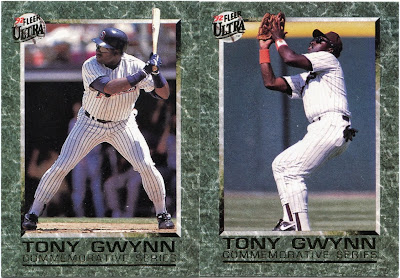 And a couple more. 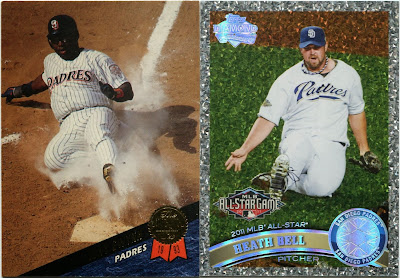 The top four cards on my list were the ones I really wanted.

And, happily, I managed to land all four. The "biggies" started out with the sliding Heath Bell, one of my favorite cards of the decade and a work of pure genius on the part of Topps.

I'd already owned the base, gold, and liquorfractor versions of it. Tracking down the regular diamond parallel means I'll be adding another parallel to the Bell family.

It's a happy day for the binder nut in me.

But then Mr. Gywnn had to go and give me another one. His card in the checklist is nothing short of legendary.

You don't see a lot of feared hitters like Gwynn featured on the basepaths too often in the world of cardboard. Couple that with the cloud of chalk dust and the rather odd angle of this shot and you have one special piece.

Should I ever become a set builder, one of my first tasks would be chasing down the entire 1993 Leaf checklist. 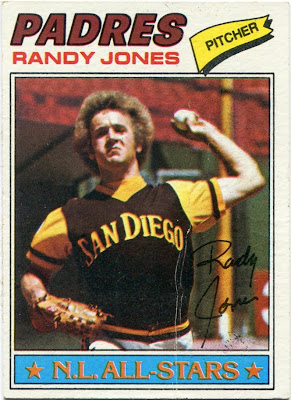 It's one of the best displays of those awful (yet oddly neat) old-school Padre uniforms. It features one of the best pitchers in the game at the time, Randy Jones. (Along with his massive hair helmet.)

And I didn't own a copy until this draft came along.

Thanks to Marcus, though, I no longer have to agonize over a massive oversight on my part. I now own the famous '77 Topps Randy Jones card. And mine has a bit of character, thanks to a crease near the middle.

I wouldn't have it any other way.

Honestly, I didn't think this one would make it to the second round. Because of that, I very nearly slotted it in at #1 on my list.

In fact, I came extremely close to doing so. 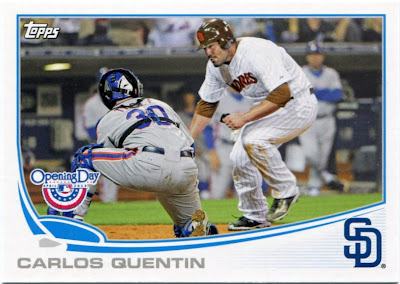 In the end, though, I went with modern over vintage.

Still, I didn't want to miss out on one of the definite cards of the year. This Quentin makes for a rare combo mini-collection shot, as it could easily be classified under the "play at the plate" or "throwback" Halls of Fame. (There's a Mets throwback hidden underneath all of Josh Thole's catching gear, too.)

Besides, it all ended up working out. Both Quentin and Jones now happily reside in my collection as we speak. My other finds weren't half-bad, either, if I may say so.

And it's all thanks to my first-ever card draft, held by a gracious fellow collector in Marcus. A huge round of applause for his generosity, please.

Now, if real sports drafts were more like this one, then I'd probably tune in a bit more. For now, though, I'll stick to the card drafts.

They're way more exciting.
Posted by Nick at 5:30 PM

Hey Nick! Glad you snagged most of the ones that you wanted. If you had taken the names off the draft lists, I still would've known which one was yours. Great eye for cardboard.

Oh yeah, and the MLB Draft is Snoozeville.

Mmmmmmmm, some excellent Gwynns there!!!