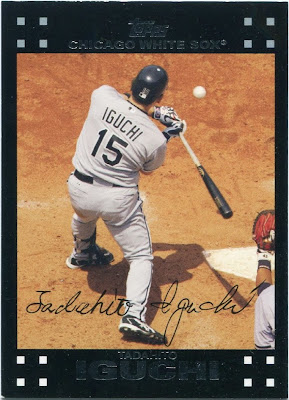 The set didn't produce a ton of memorable photos, although that may have something to do with the amount of wasted space these things have. I'm not a big facsimile signature guy, either.

And, at least in this instance, the black borders just don't work for me.

However, on one hand, the borders are about the one good thing I can say about 2007 Topps. The darkness may not have been all that appealing this time around. But I applaud Topps for at least trying.

After all, it's the only Topps set to feature anything other than a white border in the last decade. We've been in a white rut ever since 2004.

We have seen some great sets in the "white border era", don't get me wrong. Topps's efforts in 2004, 2005, and 2013 are some of my personal favorites. Still, I can't help but wonder if changing up the borders a bit would add a little spice to the industry these days.

As expected, 2014 Topps will be yet another white-bordered set.

With that in mind, though, here's a few colors I'd like to see Topps consider when 2015 comes around. 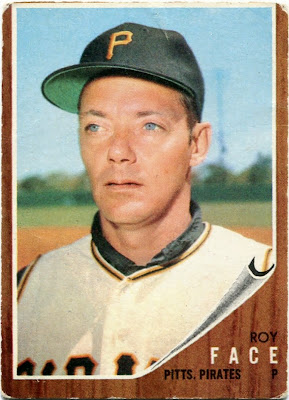 Okay, I'm not sure if "wood grain" is an actual color.

It's one that seems to work on cardboard, though. Most collectors seem to appreciate the '62 Topps borders. And it's obvious that the famous '87 checklist took a page out of that set's design.

So, if Topps wants to stick to the 25-year gap between wood grain borders, they're about a year late. At that pace, 2012 Topps should've featured them.

You owe us, Topps.

I think another wood grain Flagship set would be quite popular. 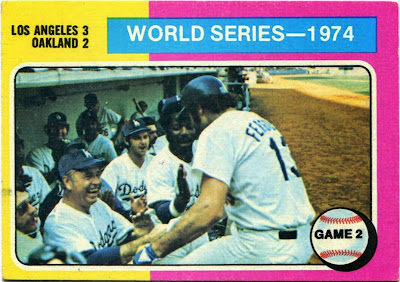 Maybe an all-pink set isn't all that masculine.

But I think it'd make for an interesting set. To their credit, Topps has made use of pink in the past, as the color is predominately featured on a few select '58 and '59 issues. Technically, though, those are still white-bordered cards.

An all-pink checklist would certainly be among the first of its kind. True, Topps made pink parallels this year, but those are incredibly scarce and not anywhere within the price range of a low-end collector like myself. What I'd like to see is an affordable pink-bordered set.

Heck, I couldn't even find an all-pink card in my collection. I had to settle for the half-and-half '75 World Series issue you see above. Even this one had to share the spotlight with some yellow, though. 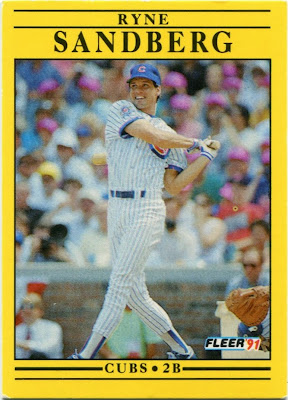 I know the topic of yellow cards can be a polarizing one.

Some bask in their glory, while others shield their eyes. Personally, I'm part of the former. The all-yellow 1991 Fleer is one of my favorite sets of the '90s for precisely that reason.

Topps, on the other hand, has never much dabbled in the world of yellow.

To me, that's a doggone shame. 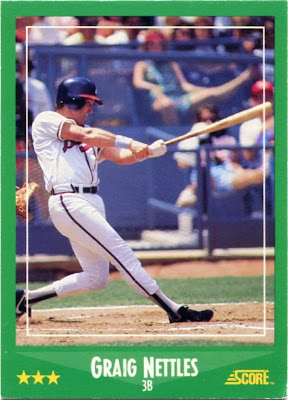 Green is one of the more scarce colors in the cardboard spectrum.

Topps experimented with a darker hue of the color in 2001, but I never felt they were all that great. Now, something that features a more "popping" shade of green, as we have with the above '88 Score Graig Nettles, would be quite a different story.

I don't know about you, but I'd love to see Topps give the all-green idea another shot. It'd certainly be a nice change of pace. Not to mention that it'd be a great fit for a team like the A's.

Maybe I'm a little biased towards green because it's probably my second-favorite color. 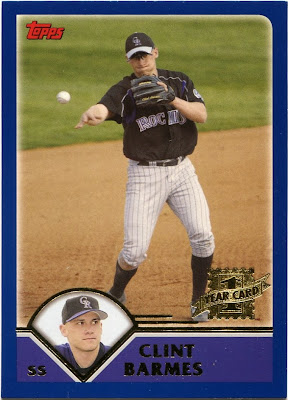 As far as borders go, Topps was quite experimental when I was first starting to enter the hobby.

Both 1998 and '99 Topps have a brown-ish theme. Topps's 2000 effort featured silver borders. As mentioned earlier, 2001 included a rather ghastly shade of green. In 2002, Topps went to some sort of strange "burnt gold" borders.

In 2003, however, Topps produced what I believe to be the greatest set of the millennium thus far.

And it's all thanks to those lovable blue borders.

No other set had made more use of the color before that. And nothing has ever since. It's safe to say that Topps cornered the market on blue borders in 2003.

There's just something about them that makes for great baseball cards.

Unfortunately, Topps has basically been dominated by white borders ever since. And it's not a trend I'm particularly happy about.

Do us a favor, Topps. Give another border a shot.

Try something new.
Posted by Nick at 7:02 PM

Probably the number one reason for Topps sticking to white for the base cards is to leave a blank slate for the ever popular rainbow o' parallels. But I think it's great when white is the rare alternate border color. The reason I don't like '07 has to do with the stupid squares taking up so much space, rather than the black borders. But one thing that worked beautifully was the white Opening Day versions, which looked great as alternate versions. Another great example is 1991 Score, a set which used multiple colors for borders, including white. The white cards looked great because they were a change of pace, rather than the norm.

I'm with you. Give us a set with colored borders, and make one of the rare serial numbered parallels white. I'd dig that.

And I vote for bright grass green. Heck, maybe even give us a grass pattern, in the same vein as the wood grain thing.

White borders have a timeless quality and aren't as prone to being considered a "bad design" as a colored border is.

That said, a lot of colored bordered sets are my favorites. When it's done right, it can be memorable.

I think the time is right for another two toned border like 1975 Topps or 1986 Topps. I also think a grass pattern is a fantastic idea. I could also see a photo being used as a background, perhaps of some empty seats with a player photo put inside it. Either way, I am with you in that the "white out" is getting kind of old.

as the owner of a couple-three dozen pink cards this year, I can say the Pink is very nice. It would never happen as the base card in a set because the rage would fly.

Personally, I was glad the wood got left in Heritage when it was due to come up again. No Thanks.

But overall, it's time.

I'm not a fan of the wood grain, and I love '91 Fleer too much to ever think that yellow borders would work for any other set. I wouldn't be totally against a set like early 90s Score where there are lots of different borders in the same set. I'm not a huge fan of some of those because of the color choice, but I think that it could still look good. Not holding my breath on that one, though.