2013 Panini Cooperstown: Back on top 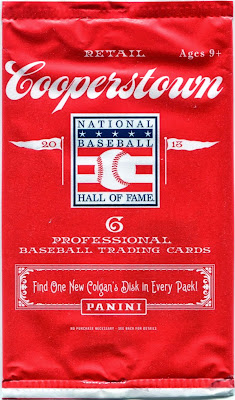 Taking a trip to Cooperstown has always been one of my lifelong dreams.

No other venue can come close to having as much baseball history under one roof as the Hall of Fame. I honestly can't imagine how unbelievable the place is. It's almost beyond comprehension.

There's no doubt in my mind that I'll make it to Cooperstown one day. I'm not sure when that day will be, but it's a dream I need to fulfill.

For now, though, I'm still a stranger to Cooperstown. I guess that's partly why I've become so obsessed with collecting Hall of Famers over the years. In a way, I get to live vicariously through Cooperstown with my baseball cards.

Of course, that's why I'm such an avid Panini Cooperstown fan.

Last year's inaugural checklist was perhaps the most pleasant surprise of 2012. It certainly made for one of the better Christmas gifts I've ever received.

While I'd been excited for the release of this year's edition, I wasn't expecting to find any at my local Target. After all, they didn't carry Cooperstown last year. But, lo and behold, Target actually had the 2013 release in stock.

An avid Cooperstown nut himself, my dad graciously treated me to a few packs of the much-awaited set. 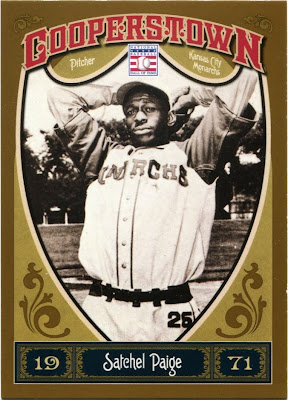 For me, the only slight disappointment from 2013 Cooperstown was the price.

A six-card retail pack will set you back four bucks. In fact, it's the first $4 Target pack I've ever seen. All others are anywhere in the one-to-three dollar range.

That aside, though, dropping four bucks on a pack of Cooperstown is still money well spent. For me, the 2013 edition is pretty much a dead heat with last year's release.

After the relative yawnfests of Pinnacle and Prizm, Panini is back on top with 2013 Cooperstown. (Plus, it goes great with their equally fantastic Golden Age checklist.)

One plus to including Negro League players is the fact that logos, such as the Kansas City Monarchs one you see above, are fair game.

Plus, I can't tell you how awesome it was to pull a Satchel Paige card from a pack. 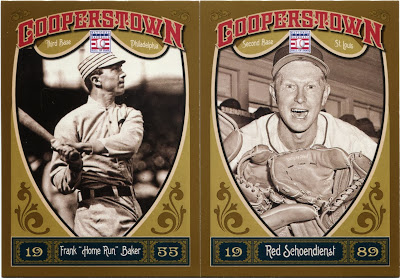 With Panini, a lot of people complain about the fact that the company can't use logos.

In an odd way, that lack of a license is what makes Cooperstown such a great product. As you might know, Topps can't release any legend-exclusive checklists these days. It was a part of their monopoly agreement with MLB.

Since Panini isn't sanctioned by baseball, then, they're pretty much free to do what they want. Which means that a HOF-centric set like this one is certainly in the cards.

Sure, the lack of logos may be obstructive at times, but having guys like "Home Run" Baker and Red Schoendienst in a 2013 checklist easily cancels out that negative.

Another redeeming quality of this year's Cooperstown checklist is the inclusion of team cities at the top of each card, which drastically helps out a team-based organizing method such as my own.

Now, I can safely say that Red Schoendienst and his gaggle of gloves belongs in my Cardinals binder. 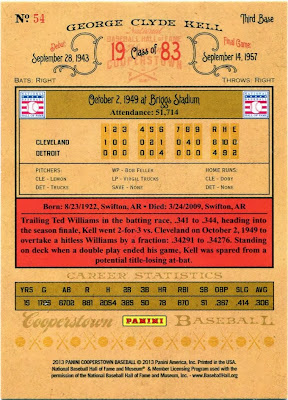 Another big addition to 2013 Cooperstown involves the backs.

Each card includes a box score from an important game in the given player's career. It's the first time I've seen something like that on cardboard.

In the case of George Kell, it was an October 2, 1949, contest against the Indians, one that allowed him to snatch the batting title away from the legendary Ted Williams.

Overtaking "The Greatest Hitter Who Ever Lived" in any department is something that deserves a mention. 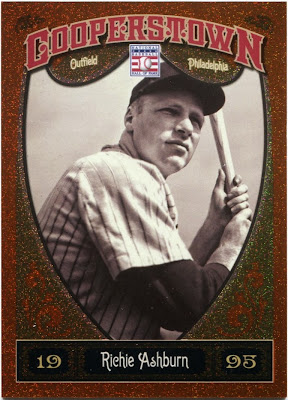 Of course, the great thing about Cooperstown for me is the fact that I need virtually every card I pull.

I can't say that about sets like Flagship and Heritage. I usually end up with quite a few extras from those.

Not so with Cooperstown, though. Inserts and parallels included.

I was lucky enough to pull this beauty of Richie Ashburn, one of my favorite Hall of Famers. It's officially listed as a "Matrix" parallel, numbered to just 325 copies. 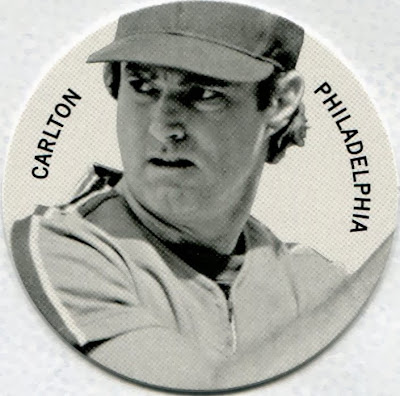 As advertised on the wrappers, I found one of these new "Colgan's Disks" pieces in each of the three packs I opened.

While I don't include circular cards in my binders, these still make for some of the better inserts of the year. As you might guess, they're modeled after a tobacco-era set.

I'd love to own a real one of these things someday. 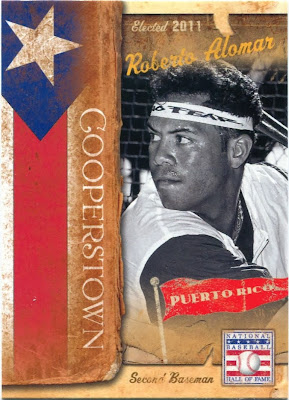 Also new to 2013 Cooperstown is the "International Play" insert set.

Overall, I'd say this is a pretty well-designed series. I love the inclusion of each player's native flag on each piece. 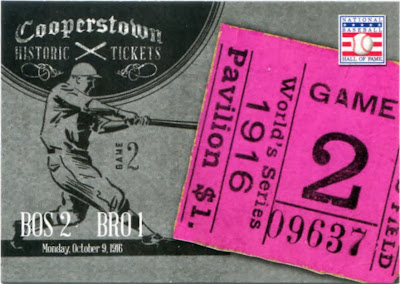 Another new addition in 2013 are these "Historic Tickets" inserts.

And, yes, I love these as well. Seeing old artifacts from the game's history has and will always fascinate me. That's one of the reasons visiting Cooperstown is so high on my bucket list.

For now, though, I'll certainly take cards like these. This one features an actual ticket from Game 2 of the 1916 World Series.

The starter for the Red Sox that day was some guy named Babe Ruth. All he did was pitch all fourteen innings in a 2-1 victory over the (then) Boston Braves, allowing only six hits and one run in the process.

My favorite aspect of this card, however, is the price of the ticket itself. It's hard to imagine a world where a World Series ticket only cost a single dollar. I know it was a different time and all, but still. 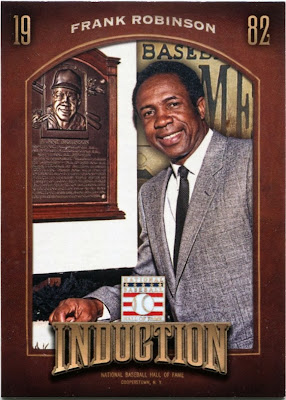 Closing things out is the "Induction" series, the lone carryover insert set from 2012 Cooperstown.

I enjoyed them last year, and I'm of the same mindset here in 2013. Seeing legends like "Robbie" next to their HOF plaque is fantastic.

In my head, I'm already saving for my dream trip to Cooperstown. It might not be easy, and it'll most certainly take a while. But, in the end, there's no doubt in my mind that it'll all be worth the wait.

For now, I'll just have to let sets like Cooperstown fill that void.

If you ask me, Panini has done a great job with that so far.

It's another dinger out of Doubleday Field.
Posted by Nick at 6:29 PM

Great job on the review. I have to agree about the price point. It scared me off. Your point is well taken that you don't end up with a bunch of whoevers. Every player is a star. That being said this poor collector will probably wait and hand pick some on COMC.