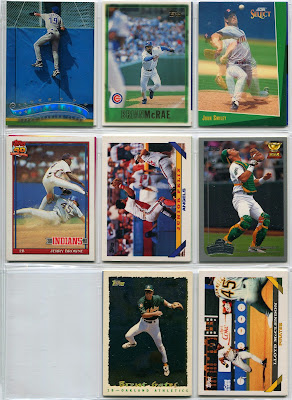 In case you forgot, I'm in the process of building my very first frankenset.

I haven't exactly advertised it on the blog as much as I'd originally hoped, as my last frankenset post was featured over a month ago.

However, despite the lack of promotion, this little project of mine is quickly becoming a ravaging success. After starting with a great deal of holes, I'm currently just three cards short of having every slot from numbers 1-100 filled.

This page features one of those remaining gaps.

Aside from that, though, I think we have a great array here. It's a nice combination of mini-collection hits and simple "cool" cardboard, which was really the point of this frankenset to begin with. 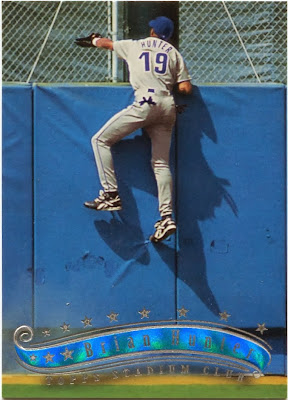 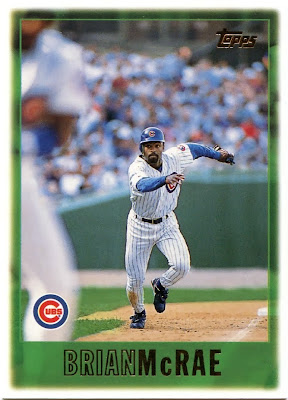 While my apathy towards 1997 Topps has been documented in the past, I'll admit that this is one fantastic baseball card.

Shots of guys leading off first or second are fairly common in this hobby. But only a select few feature baserunners at third.

With the Wrigley Field side wall as a backdrop, Brian McRae appears to be in motion on this particular play. Perhaps he's in the process of stealing home.

Now that would be neat. 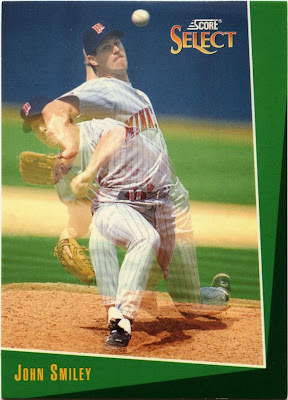 It's a little surprising to see one of these multiple-exposure shots pop up in a relatively obscure set like '93 Score Select.

For the most part, such grand works of photography were limited to the "big guys" at Upper Deck and Topps.

It's nice to see other companies joined in on the fun. 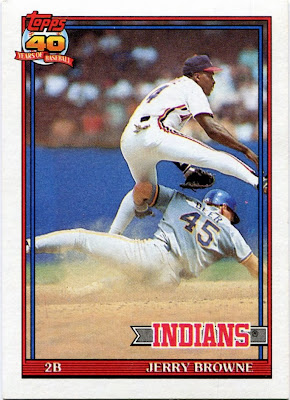 As you'll see in later frankenset posts, Topps scattered quite a few of these throughout their 1991 checklist. 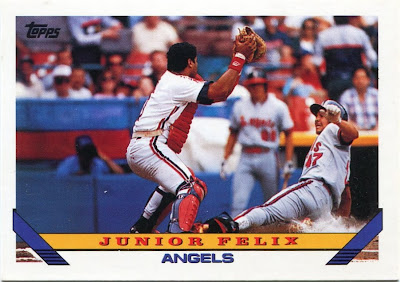 This isn't the first time I've shown this card around here.

As I mentioned here, I picked it up purely by accident. It was a throw-in with one of my past Listia buys. (Remember that place?)

Junior Felix was indeed safe on this "play at the plate". Gary Gaetti's card in the '93 checklist features another PATP from the very next play in this game. (He, on the other hand, was gunned down at home.)

And, since the catcher in this particular shot is former Indian Junior Ortiz, we have a "Double Junior" sighting on our hands.

Such a neat piece of cardboard is a perfect centerpiece for this page. 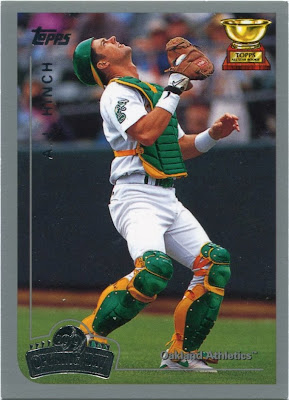 A.J. Hinch was the victim of a Topps screw-up.

While it may be a bit difficult to tell at first glance, this is actually a reverse-negative. (The flipped sleeve patch is probably the best indicator.)

Due to my error-loving ways, I have both the base and Opening Day versions of it in my collection. While both have different numbers, only one can occupy a slot in this frankenset. It's one of the few rules I have with this project.

In this case, Opening Day won. 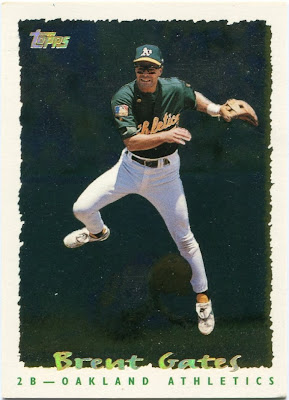 Kind of like the Hinch, I have two versions of this card in my collection.

While it may be hard to see here, Brent Gates was granted a nice "double dip" shot for his '95 Topps issue. I own both the base and Cyberstats variations of it.

In the end, the Cyberstats version went into my frankenset due to fairly weak competition at the #80 slot.

Even all these years later, I still can't decide whether I love or hate these parallels.

Due to rather abbreviated stat lines in the aftermath of the 1994 strike, Topps ran some computer simulations to see what select players might have done if the season had run its regular course.

That's the basis for the Cyberstats subset. They don't even feature real statistics on the back. Then again, it was quite an innovative concept. 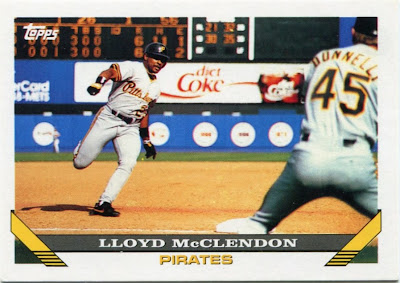 Coupled with the aforementioned Felix, this page features two of the greatest cards 1993 Topps had to offer.

I've long been awestruck with this amazing piece. According to the scoreboard, McClendon (who is listed with the rare C-1B-OF designation on the back) appears to be in the process of scoring the go-ahead run in the 10th inning of this particular contest.

While I doubt I'm the first to do it in correspondence with this card, I'm feeling a little detective-y today.

I'm no stadium expert, but that's obviously the famous Shea Stadium in the backdrop here. (Along with a perfectly centered Diet Coke ad.)

The records show that the Pirates beat the Mets, 7-6, in a 10-inning contest on August 12th, 1992. After slapping a pinch-hit single, McClendon would wind up scoring the game-winning run in the 10th on a two-out, RBI triple by Jay Bell.

Finding out the history behind a particular baseball card is rather thrilling.

It's a great way to close out this frankenset page, if you ask me.
Posted by Nick at 6:23 PM

Nice framing on the McRae.

Don't quite know what to think about Cyberstats, either. The backs were unreadable, and smacked of '95 Fleer's fascination with graphic vomit.

But the strangest thing about them was that they were parallels, but only existed for some players. Not just a few players, but not all of them either. I wonder if there have been other parallels made with a similar ratio.

That was a helluva 7th inning at ol' Shea Stadium!

According to baseballreference.com; McRae had 1 attempt and did indeed steal home. It was also his only successful steal of home in his career. A pretty cool card.

Very cool project. One of these days I'd like to build a Frankenset out of all of my favorite teams. Btw... very cool to see some Athletics in your binder.

I had never heard of those Cyberstats cards. I'll have to look into them.

I've had that McClendon card since 1993 and never noticed the scoreboard in the background. Thank you for your detective work!