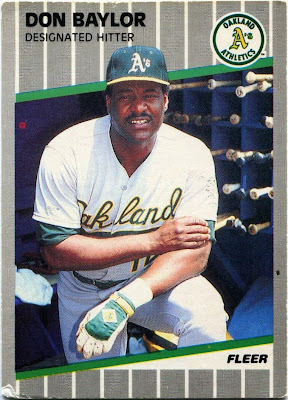 Don Baylor here saved Fleer from being left out of today's "number one" theme entirely.

Because the checklists were basically alphabetical, many of the brand's overproduction-era sets had fairly obscure ballplayers occupy the #1 slot.

I mean, the initial card in Fleer's 1991 offering is a rookie of someone named Troy Afenir. (For what it's worth, Afenir racked up a grand total of 45 career games over four seasons.)

While it wasn't the flashiest set around, 1989 Fleer easily had the best "number one" in the brand's early history. As its worn corners and soft edges might imply, this Baylor can be traced back to my childhood, a time which I didn't take great care of my cardboard.

Even back then, I had a passion for "sunset" cards. That's exactly what we have here, in fact. Baylor closed out his illustrious career with the 1988 A's, playing in 92 games in Oakland that year.

In fact, the feared slugger wound up playing for three different teams during the final three seasons of his career. And, in an odd twist of fate, all three of those squads would go on to appear in the World Series.

The 1986 Red Sox did it, infamously coming up just short of winning the Fall Classic that year. A late 1987 swap sent Baylor to the Twins, a team which would win it all in a four-games-to-three World Series victory over the Cardinals.

And, in his final season, Baylor would help lead the 1988 A's to the Series, although they'd eventually lose to the Dodgers, four games to one.

It was actually Baylor's second stint in Oakland. To my knowledge, though, he never had a card issued during his initial tenure with the franchise in 1976.

Although it came thirteen years later, I'm glad he finally got a card as an A.

In the end, the close of Don Baylor's career made for a great opening to the '89 Fleer checklist.
Posted by Nick at 2:30 PM

I am just starting up a Don Baylor collection that I will talking about later on on my blog. He does have 1 "card" from his initial Oakland stint. It is in the 1977 A's Postcards set.

dave anderson should have been number 1 in the 89 fleer set - the dodgers won the world series in 88, after all!

Wow. You found something good about 1989 Fleer. Impressive.