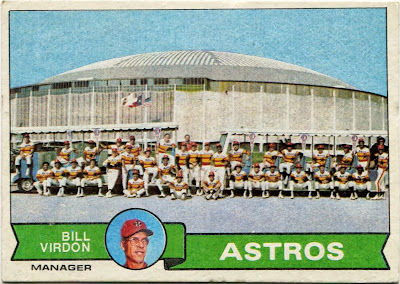 I've had a blast watching the playoffs so far this year.

Even though the Pirates and A's are out of it already (my two favorite teams that made the postseason), it's still made for some great TV. Sunday's amazing Red Sox comeback has to rank among the greatest games I've ever watched.

We've seen superb pitching performances left and right, including a few near no-hitters. Great, great baseball is alive and well in the playoffs this year.

On that note, though, we'll be discussing the Houston Astros, the worst team in baseball today. They finished 51-111 this year, 45 games behind the A's in the AL West.

I applaud the fans who have stuck with the Astros, to say the least. I'm truly hoping these #1 picks they've been accumulating work out in the end.

In what has become a rare "theme post day" around here, we'll be taking a look at the most unfamiliar big leaguers to don the Astros gear during the franchise's history.

Before we start, though, I have one question for you.

How awesome is that Astrodome-themed team card? Since I already devoted one of these posts to my collection of defunct teams, I've decided to treat the Colt .45s and Astros as two separate squads.

So, yes, Don Larsen is technically an Astros "one-game wonder". But he did pitch in 30 games with the Colt .45s in 1964 before they switched names.

Still, the fact that Larsen appeared in just one game as an official Astro has to count for something. He'd be traded to the Orioles after his lone appearance with the franchise in '65. He was out of baseball completely in 1966 before appearing in his final three games with the 1967 Cubs.

While it wasn't his "sunset" season, this is Don Larsen's final card. I found this well-loved copy for a quarter at a card show a few years back.

Not one of the more pleasing shots ever snapped in cardboard history, to say the least. 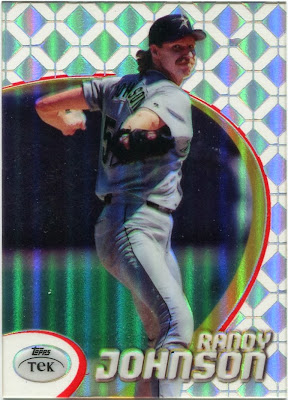 Topps Tek may be the craziest set ever released.

On the surface, it looks like a standard 90-card checklist. At least until you find out that each card had 90 different background variations. Plus, I hear each one of those had a refractor version.

In case you're crazy enough to care, this one of the "Big Unit" is the 88th of 90 patterns this headache-inducing checklist featured.

On that note, I'm sure quite a few opposing batters grabbed some aspirin after facing Randy Johnson during his stint with the Astros. He went 10-1 with an amazing 1.28 ERA in his 11 post-Trade Deadline starts for the franchise, helping them reach the playoffs in 1998.

The 'Stros did pay a decent price to get him, sending (then) hot prospects Carlos Guillen and Freddy Garcia to the Mariners for Johnson, who basically amounted to a rental player for Houston in '98.

I'm sure Astros fans would tell you it was worth it, though. 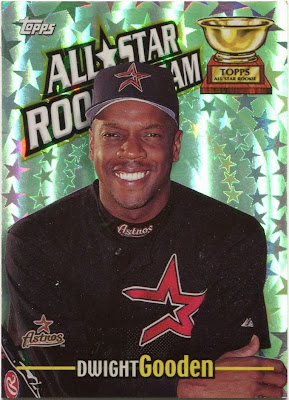 He pitched in exactly one game with the franchise before being sold to the Devil Rays in April 2000. Gooden was released eight starts into his Tampa tenure, eventually hooking up with the Yankees for the final 18 games of his career.

To my knowledge, though, this is the last Dwight Gooden card ever printed. A little-known insert in the 2000 Topps checklist, it features "Doc" in wildly unfamiliar Astros gear. It's a card I featured in my first-ever flea market post on this blog.

"One-game wonders" aren't too common in this hobby.

Dwight Gooden is part of a select class. 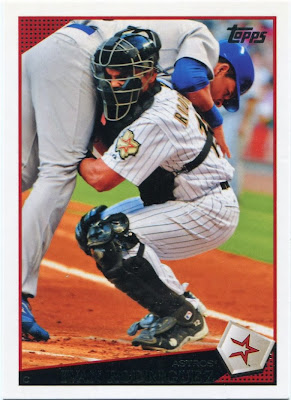 I have to believe that "Pudge" Rodriguez will get into the Hall of Fame someday.

If so, he'll no doubt be wearing a Rangers cap on his Cooperstown plaque. Even so, "Houston, NL, 2009" will be listed amongst his career accolades.

By then, I'm sure a lot of fans won't even remember he was an Astro at one point. But, alas, he was.

Here's a tremendous "play at the plate" shot to prove it. 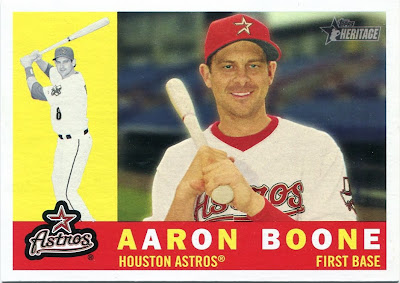 While not quite at Bucky %^&*'n Dent levels, Aaron Boone is widely revered by Yankee fans and unanimously hated by Red Sox supporters.

As you probably know, his game-winning homer in Game 7 of the 2003 ALCS sent the Bronx Bombers to the World Series, crushing the hopes of Red Sox nation. At that point, Boston hadn't won a World Series since 1918. (They'd get their revenge the following season, of course.)

Something you might not know about Aaron Boone, though, is the fact that he came back from open-heart surgery to play in the big leagues. At age 36, he underwent a procedure to correct a lifelong heart problem during Spring Training in 2009.

Against all odds, he came back and earned a September call-up that year, appearing in 10 games with the Astros. He'd call it quits after the '09 season.

This is Aaron Boone's only Astros card.

Not surprisingly, it's a personal favorite from my Houston binder. 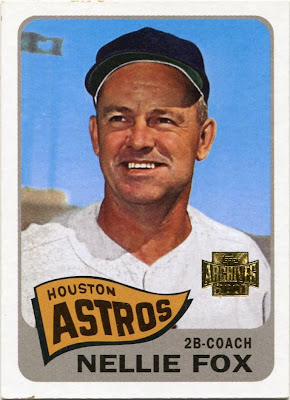 The future Hall of Famer closed out his career in a limited role with '65 Astros, only appearing in 21 games for the franchise. I'm guessing it was more of a mentoring role for a fairly young roster at the time. (Hence, the "2B-Coach" designation on this one.)

I've been trying to track down an actual copy of Fox's final card for a while now, although my attempts have proved futile up to this point. (At card #485 in the '65 checklist, it's a semi-high number.)

It's a piece that would certainly spice up my "sunset" collection.

Part 2 will be headed your way later tonight.
Posted by Nick at 1:30 PM

Awesome concept - I hope you continue it with other teams. Johnson's stint with Houston was beyond dominant, which I imagine was only helped by the Astrodome.

I think Boone's card is not only a short term stop for the Astros, but also a STS for first base. I thought he only played third in his career.

I think the Dwight Gooden is the ultimate STS card ever. Simply because of it being an insert only. Just not easy to find.

I was totally rooting for the Pirates and A's as well! Now I'm all on board for the dodgers. Who do you think will go to the World Series?

I had the Nationals winning it all before the season started, guess I missed on that one. I'm going with the Dodgers to win the Series as of right now.

WHAAAT? Doc was a 'Stro? That card is crazy, I had no idea.

Yeah, I had the Nats and O's at the beginning of the year, which I figured was wishful thinking, but I thought that at least ONE of 'em would make the playoffs. I'm now rooting for every team that's not the Dodgers.

I just discovered...not only was Doc a one-game Astro, but so was his longtime teammate Sid Fernandez. He has Astros cards in 1997 Fleer, Fleer Ultra, Mother's Cookies, and Stadium Club. BTW, he also has a 1984 Donruss with the Dodgers, but he played TWO games for them.