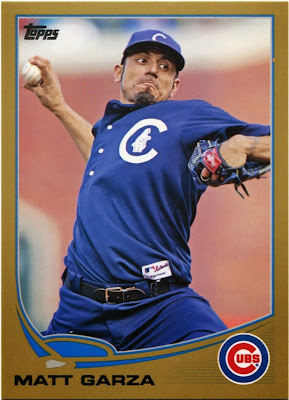 I don't want to start my 2013 retrospective just yet.

After all, we still have an action-packed postseason waiting in the wings. I can't wait to soak in all this playoff baseball.

And, as far as cards go, Topps Update is set to hit the streets in a couple weeks. I just pre-ordered my annual box of the stuff last night, in fact. (It'll be my first and only box of the year.)

Still, try as I might, I haven't been able to stop myself from looking back. Looking back at (yet another) miserable season for my beloved Cubbies. Looking back at the terrific season my man Marlon Byrd had. (One that isn't over yet, mind you.)

What triggered that decision was the above gold Matt Garza parallel, one of the first cards to fall out of a package from "friend of the blog" and longtime trade partner Robert of "$30 A Week Habit".

While he's no longer a Cub, I knew Mr. Garza (and his awesome throwback) was a definite "Card of the Year" candidate from first sight. 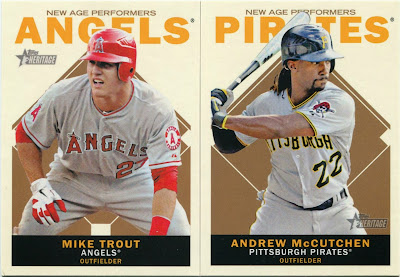 Sure. You can't go wrong with anything featuring Trout and/or McCutchen.

"Card of the Year" candidates, though?

Since it'll feature my all-time favorite '65 Topps design, I'm sure you'll see a few pieces from 2014 Heritage pop up on my "Top 10" list next year.

I'm already looking forward to it. 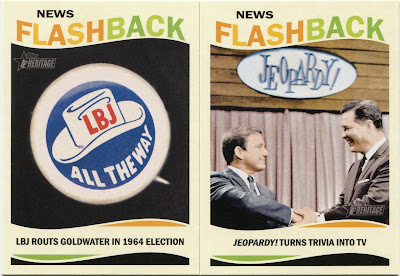 I'm starting to think I'm the only one who cares about these "News Flashbacks" inserts anymore.

As it stands, I'm three cards away from completing the series for the sixth consecutive year. Robert certainly helped me out by sending along these two.

That Jeopardy! card would definitely be on my "Top 10" non-baseball countdown.

Which, now that I think of it, isn't that bad of an idea. 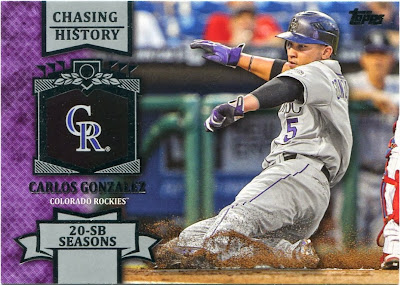 I'm shocked to say it, but this is actually a really nice piece from this year's "Chasing History" insert set.

For the most part, this particular series was an uninspired one on the part of Topps. But this semi-PATP shot of new "binder guy" Carlos Gonzalez is a treat.

Definitely one of the better inserts I've seen in 2013. 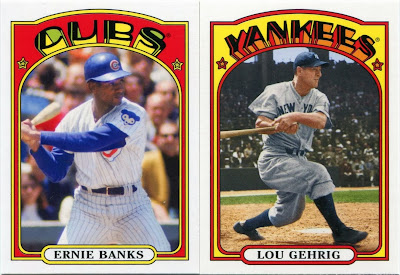 "Insert Set of the Year" honors, however, may well go to Flagship's 1972 minis.

"Mr. Cub" just missed having an actual '72 card to his name, as his "sunset" issue can be found in the 1971 Topps checklist. However, Banks did play in 39 games with the '71 Cubs, yet didn't receive a true finale the following year.

So, in a way, Topps did their best to correct a bit of an oversight on their part there.

That has to at least earn Ernie Banks some consideration for "Top 10 of 2013" honors. 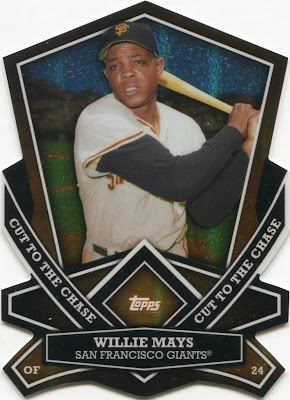 I wouldn't count on seeing many inserts on my final list, though.

As you probably know by now, I'm a base card kind of guy.

So, while pieces like this Mays are beautiful adds to my binders, I don't necessarily see them making my "Top 10" countdown. 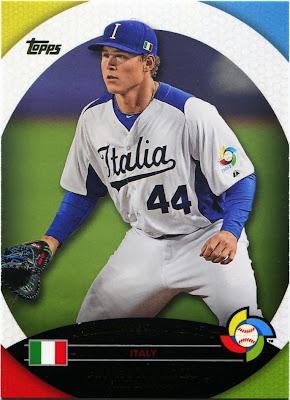 ...this will definitely be one of the exceptions to that rule.

This WBC Rizzo was the basis for Robert's recent trade package, as I'd specifically requested it from him after he posted about a few Flagship breaks.

In retrospect, one of my favorite baseball moments of the year was seeing Team Italy surprise almost everyone in the World Baseball Classic back in March.

When I saw that Topps released a WBC insert set in Series 2, I prayed they'd include at least one paisan. Those prayers, I'm happy to report, came true with Mr. Rizzo here.

As probably my favorite hometown guy these days, he's had a few nice cards in the Cubbie blue this year.

But, as far as I'm concerned, this was Rizzo's finest cardboard moment in 2013.

I'm not exactly sure when I'll actually start composing my "Top 10" list, but you can bet this'll be on it after all is said and done.

Let's not get ahead of ourselves here, though.