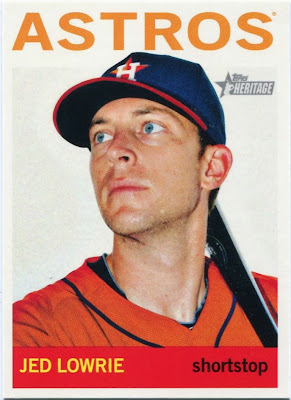 In continuing with this afternoon's post, we ease into "Part 2" with a newer member of this unfamiliar squad.

It's almost hard to believe, but last year's 107-loss Astros were actually four games better than this year's club.

Jed Lowrie was sent to the A's in February of 2013, playing a fairly substantial role on a team that would go on to win the AL West. (While Oakland lost in the Division Series, I'm sure he was happy to escape Houston for the time being.)

Because the trade occurred relatively late in the offseason, Topps didn't have a chance to update Lowrie's card in this year's Heritage release. Thus, he appears in the new orange Astros garb, a uniform which he never actually wore. 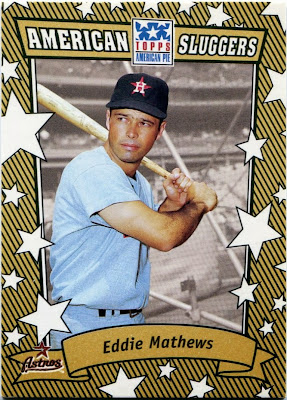 In terms of sheer oddness, this may well be the king of the Astros' "Short Term Stops" roster.

For a long time, I thought Eddie Mathews was a career Brave. Heck, he was the only player to play for the Boston, Milwaukee, and Atlanta reincarnations of the franchise. All signs pointed to the third baseman being a lifelong Brave.

As I later found out, though, he was a Houston Astro for a brief time. And, after that, a Detroit Tiger.

For whatever reason, Topps chose to feature Mathews during his forgettable stint in Houston on this cool American Pie insert. He's also listed as an Astro on his 1967 Topps issue, although it's an obvious chop job of a Braves uniform on the part of Topps. (I picked up a copy at this year's National.)

After all was said and done, just ten of Mathews's 512 career homers came with the Astros.

If this is the first you're hearing of his time in Houston, I wouldn't blame you. 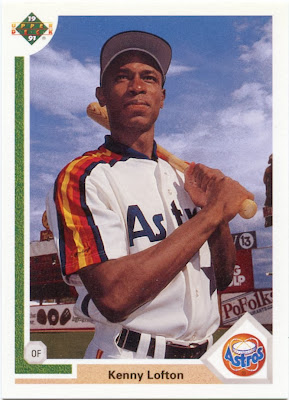 It's very possible that Kenny Lofton's Astros tenure was at least partially responsible for my current fascination with unfamiliar uniforms.

As a young collector, I remember being obsessed with finding a card of Lofton in Astros gear. I'm not sure what sparked it, but I wanted one bad.

Since he ended up playing for eleven different teams during his long career, Lofton wore a great deal of other unfamiliar jerseys. To me, though, Houston is the one that sticks out the most.

So, thank you, Kenny Lofton. 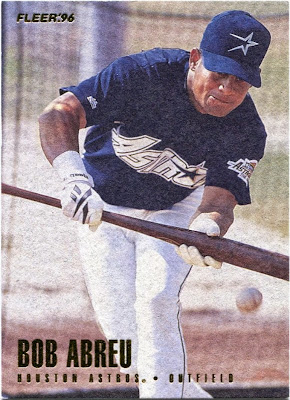 While not on Lofton levels, I was quite determined to get a card of Bobby Abreu as an Astro way back when.

For whatever reason, though, I could never seen to find one. Nowadays, I wonder how they eluded me for so long. As of this writing I own 56, yes, fifty-six cards of Abreu in Astros gear. (Minor league cards included.)

While it spanned across two seasons, his tenure in Houston wasn't all that memorable. Abreu hit just .248 as an Astro. He was actually taken by the Devil Rays in the 1997 Expansion Draft, but Tampa immediately dealt him to the Phillies for Kevin Stocker.

Abreu wound up making quite a name for himself in Philadelphia, routinely putting up .400-plus OBP seasons in his career. All of it can be traced back to his Houston days and my 56 cards of him with his first team.

I still can't help but wonder how it took me so long to find one. 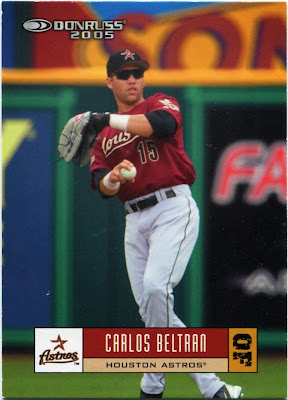 Seeing as we're in the midst of the postseason right now, it's only fitting that Carlos Beltran closes out this round of "Short Term Stops" posts.

After all, he's one of the best players in the history of playoff baseball, a trend that has continued in 2013. It's a major reason why his time with the '04 Astros was one of the more famous "Short Term Stops" in recent memory.

In a major midseason swap, the Royals sent Beltran to Houston in June of 2004. He'd go on to hit 23 homers in just 90 regular-season games with the Astros...but the story doesn't end there.

He hit well over .400 in both the NLDS and NLCS that year, slugging eight homers in 12 postseason games. (Although Houston would eventually lose to the Cardinals in the latter round.)

Those insane postseason numbers undoubtedly played a major role in the seven-year, $119 million contract he'd receive from the Mets that offseason. I don't know that he ever fulfilled those gargantuan expectations, and I'm not sure Mets fans have ever forgiven him for it.

Either way, though, he's one of the more illustrious "Short Term Stops" candidates you'll find.

True, the Astros did move to the American League this year, but I don't yet have a candidate for their DH position on this roster.

Saying "Astros" and "DH" in the same sentence doesn't even sound right.

They'll always be a National League club to me.
Posted by Nick at 5:30 PM

I like this little series of yours. I forgot Lofton started as an Astro and never realized Dwight Gooden pitched one game for them.

I love this series that you're doing. Keep up the great work!

These are my favorite posts of yours super informative and very educational as well. Like so many others I was surprised to find Gooden played for Houston. Good stuff

I think with another 100+ games and a ring, Beltran no longer qualifies...