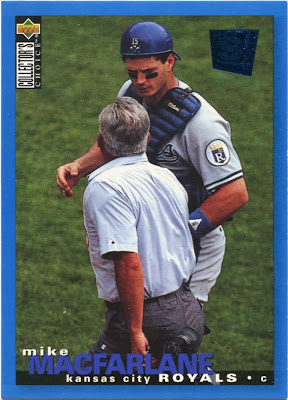 Some of you probably know how much of an organizing nut I can be.

I abide by a somewhat strict sorting system, one I've had for as long as I can remember. And, for the most part, I like to get my cards filed away as quickly as possible.

Since I haven't had a ton of time for cards lately, I've dramatically loosened my sorting schedule in recent months. Heck, I just got done putting away my finds from that "mystery box" I bought nearly a month and a half ago.

In a case of deja-vu, that very same vendor was back at my most recent trip to the local flea market a couple weeks back. And, yes, he had another "mystery box" on display.

This time around, though, it was a vastly smaller 800-count box. And I managed to restrain myself from snagging the whole thing, instead choosing to sift through all those dime cards one at a time.

In the end, I found around 30 cards for a grand total of three bucks. Perhaps the best find of all was the above Mike MacFarlane, an excellent addition to my sparse "Say the Magic Word" mini-collection.

And, while I had a lot of fun with the whole "mystery box" thing, I think hand-picking is definitely the way to go. 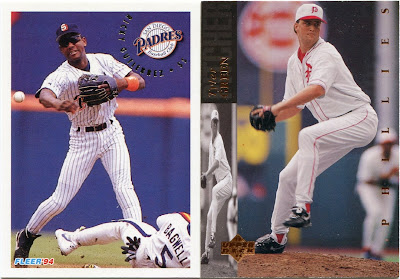 There's just something innately special about finding a few treasured cards during a dime box dig.

It's not necessarily a feeling you get by just taking home an entire box of cardboard. Working for those precious mini-collection hits is like my second job, if you will. And one that's far more rewarding.

Double plays and throwbacks are just a couple of the fruits of my labor.

The Jeff Bagwell "double dip" cameo is a bonus. 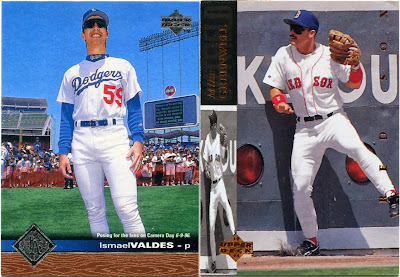 Much like his first "mystery box", this vendor's selection was almost exclusively limited to early-to-mid '90s cardboard.

I love anything with a "Green Monster" theme, which is the reason I picked up that Greenwell.

Plus, between the fans packed into the background, the awesome Dodger Stadium backdrop, and the quirky "Camera Day" theme, the Valdes just screams mid '90s. 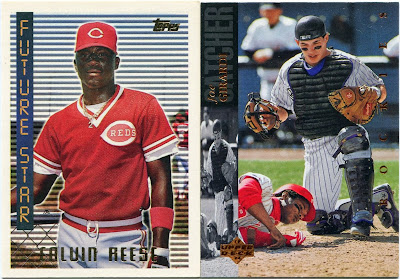 As evidenced by these two, player collection finds were in full bloom as well.

Any card that lists the given first name of Calvin Reese (better known as "Pokey") is okay in my book. 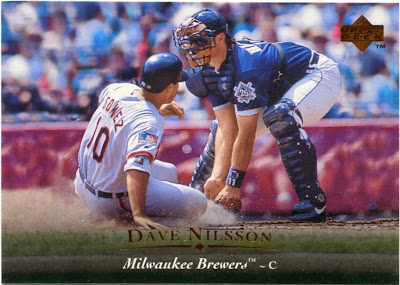 Closing out this dime box was another fantastic "play at the plate" shot for my frankenset.

Although there wasn't anything as special as a '56 Sandy Amoros or anything, little "grab bags" like these are what I live for as a collector.

After all, not every dig is going to have that legendary pull. 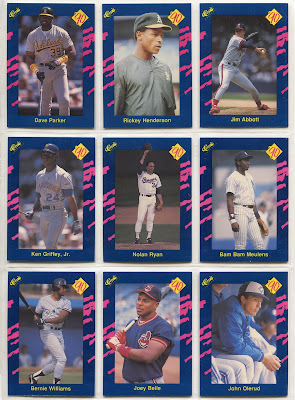 That kind of became a theme during my flea market rounds a couple weeks ago.

Yes, I found that '56 Amoros and some other mega-vintage and modern finds, but I still nabbed a few A+ buys that kind of lurked under the surface.

Among those was a complete 1990 Classic Blue set, 150 cards in all. I scored it off my "regular guy" for a mere two bucks, game pieces and all. (The backs contain trivia questions meant for a baseball-themed board game.)

A fitting card #1 in the checklist, the heroic Nolan Ryan was probably the best of the best in this Classic set. Not to be outdone, though, is the awesomely-nicknamed Hensley "Bam Bam" Meulens. (He enjoyed a rather mediocre seven-year big league career.)

All in all, I'd say it was two bucks well spent. 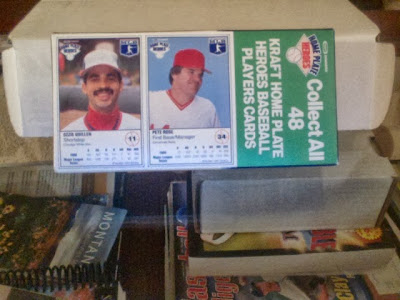 Later that very same Sunday afternoon, I made my way to another local flea market, one that only pops up about once or twice every summer.

It's the same one that resulted in a rather unexpected dime box adventure last year. Thanks to that success, I came in fully expecting to find some cardboard. I know it's a risky move to have high expectations when it comes to things like this, but I couldn't help it.

As it turns out, my expectations were happily met. And then some.

It started off with one of the better oddball finds of my career. During the greatness of this year's National, I managed to scoop up a few singles from Kraft's "Home Plate Heroes" checklist.

This dingy little flea market managed to do the National one better though. I found an unopened box of authentic Mac and Cheese from 1987 at one of the tables for a meager two bucks, one that features a young Ozzie Guillen and an over-the-hill Pete Rose.

At first, I was planning on gutting the box in order to have these two oddballs in my binders. But, in what I think was the better decision, I'll be keeping the almost 30 year-old packaging intact.

And, no, I don't plan on eating any of the Mac and Cheese. 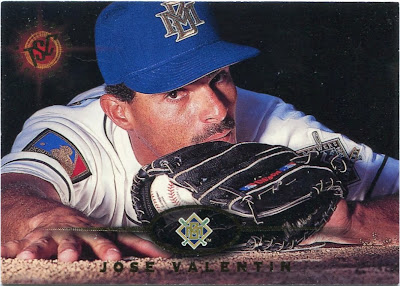 Had my Mac and Cheese treasure been my only find, I would've been more than pleased.

But, just a few tables down, I found a lady selling little grab bags of cards for a quarter a piece. Each batch had about 30 or 40 cards of '90s cardboard.

At less than a penny per, I couldn't help but pounce. I nabbed eight grab bags for that magic two-dollar price tag.

One of the groups was almost exclusively made up of 1995 Stadium Club singles. I was ecstatic.

While the brand is mostly remembered for its terrific action photography, Stadium Club was a treasure trove for posed shots as well.

I don't think I've ever seen another card quite like this Valentin before. 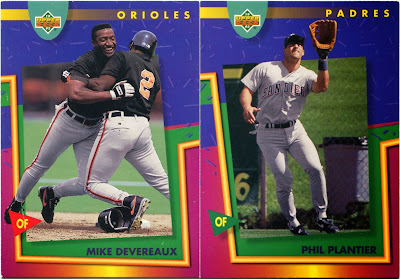 The unheralded 1993 Upper Deck Fun Pack brand was another predominant presence in these grab bags.

I'll admit, I'd never given the set much of a thought before this particular purchase. Now, though, I'm starting to realize that it actually wasn't that bad of a set.

It was, for lack of a better term, quite a fun little offering on UD's part. I guess "power hugs" were all the rage back in '93. Either that, or Mike Devereaux is on the verge of pile-driving a teammate into the ground.

At first glance, the Plantier doesn't look like anything special. But, as far as I know, it's the first time I've seen a trash can on a baseball card.

Add it to the checklist of inanimate objects on cardboard. 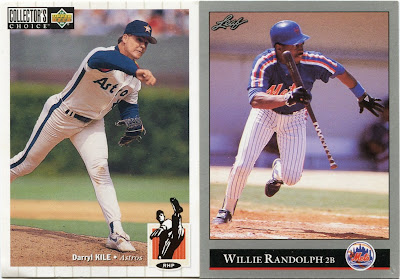 With all the Darryl Kile cards I've received from my fellow bloggers, I can't believe there's any I still need. 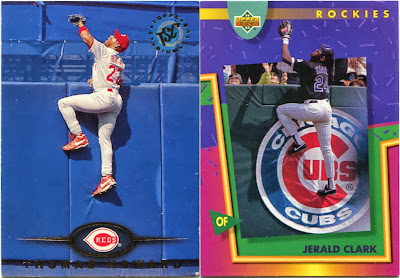 This is one of the greatest side-by-side scans I've ever featured on this blog.

These are a couple of freakishly identical "At the Wall" mini-collection adds. And, despite my hometown ties, I don't mind Jerald Clark stepping on the logo of my beloved Cubs.

After all, everyone seems to be trampling on the Cubbies these days. 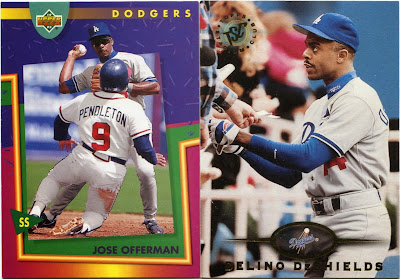 More mini-collection greatness here, this time of the Dodger variety.

With them being on TV right now and all, I guess I'm kind of in a Dodger state of mind. 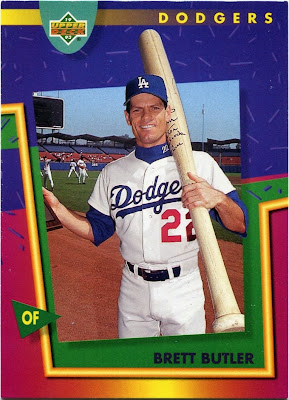 While trash cans and wall climbers are great, this was the single greatest find from those grab bags.

Honestly, I'm not quite sure how I'd never seen this card before. Much like the aforementioned Valdes, it features a rather striking Dodger Stadium backdrop.

But, of course, the real story here is the giant bat on Brett Butler's shoulder, one that looks to contain a few autographs from his fellow Dodger teammates.

Understandably, the former outfielder looks about ready to tip over, almost appearing to grab this card's frame for support.

Over time, I've learned exactly one thing about grab bags.

I've learned that I know absolutely nothing about them.

I guess that's why I keep coming back to their clutches time and time again.

They always make for a nice surprise.
Posted by Nick at 8:03 PM

That 1995 Stadium Club Delino DeShields card was one I picked out about 10 minutes ago to send your way!

What are the chances?

I'll find some other goodies...

So many goodies you have!
But that Valentin 'bit'the'dust' card looks awesome!

That DeShields card is one of 2 1995 Stadium Club Dodgers that I need. You can send it my way. Just send me an email and I'll give you an address. And I've still got your list of wants that I have to check, too.