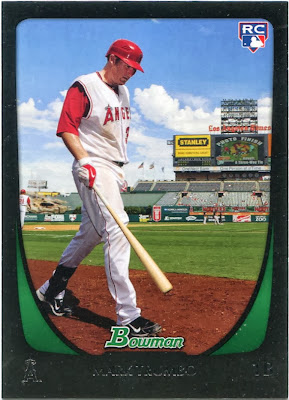 For those of you who don't know, I've used a site called Sportlots for many of my past impulse buys.

It's a nice little place that features nearly any card you could possibly want from a myriad of individual sellers. If you can find someone with reasonable shipping costs and a large inventory, then you can have quite a bit of fun on there.

Trouble is, sometimes finding a seller with relatively low shipping costs can be tough. I guess I've gotten lucky with my past few purchases in that regard.

In case you're wondering, no, this isn't another of my "impulse buy" posts. The idea just crossed my mind thanks to a PWE from reader Corey, who's sent me a few little knick-knacks in the past.

This time around, he hit a longtime "Dime Box Dozen" need of mine with one of my newer binder guys, Mark Trumbo. Such an elegant backdrop makes for one of the better rookie cards I've seen in a long time. And it's courtesy of Bowman, of all brands.

However, as great as the Trumbo is, the note Corey included proved to be the more memorable aspect of this envelope. In it, he recommended another card site called "Just Commons".

I'd heard of the site before, but never gave it a real look. With such a glowing testimony from a fellow collector, I figured I'd give it a shot.

Long story short, it is an unquestionably awesome website. I made a fairly substantial purchase from their inventory a few days ago, one I hope to feature on the blog once they arrive. (It'll most certainly be a two-parter.)

After all, I am a commons type of guy. 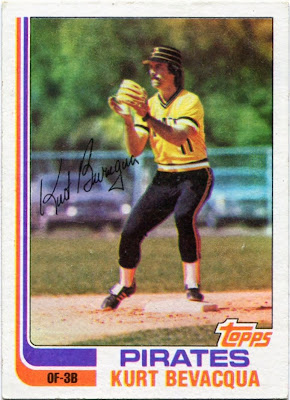 Jerry, author of the relatively newer blog "The Budget Trading Card Collector", was nice enough to send me a nice batch of late '70s and early '80s cardboard recently.

Although it's a possible "double dip" candidate, the background of this Bevacqua is what grabbed my attention.

It's a poor man's Luis Alvarado with the cars and all. 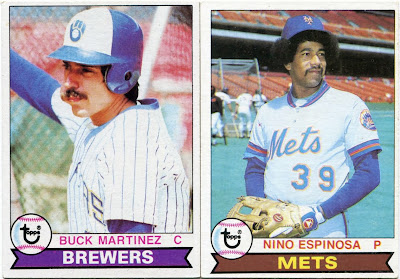 Then again, even the worst '70s release is better than a whole lot of others out there. And, besides, '79 Topps is still a darn good set.

Chaw-centric cards like the Buck Martinez filled the '60s and '70s. It's one fad I'm kind of glad has died down in recent years.

And, considering I'd never heard of him before this package came into my possession, that's one massive 'fro on Nino Espinosa.

It's almost at Jose Cardenal levels. 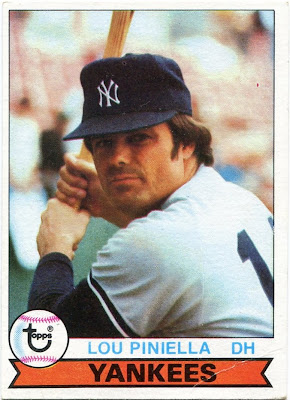 My far and away favorite from Jerry's batch, however, was this one of "Sweet Lou".

As I found out, this isn't Piniella's standard 1979 Topps issue. It actually hails from the oddball Burger King release. It's also my very first card from food-themed set, one that I'm excited to add to my collection.

After all, oddballs make for some of the very best commons. 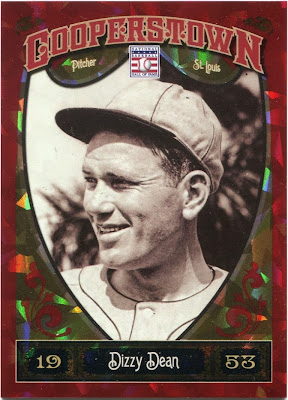 Okay, so maybe my collection isn't all commons.

I do get a great deal of enjoyment out of certain uber-shiny parallels.

In what looks to be a new fad in the cardboard industry these days, this "cracked ice" Dizzy Dean beauty (limited to just 399 copies) hails from this year's Panini Cooperstown checklist.

And it came courtesy of a recent PWE from Tom of the terrific blog "Waiting 'Til Next Year". While I've since acquired more, ol' "Diz" here was my first look at 2013 Panini Cooperstown. Panini looks to have hit another home run with this release. 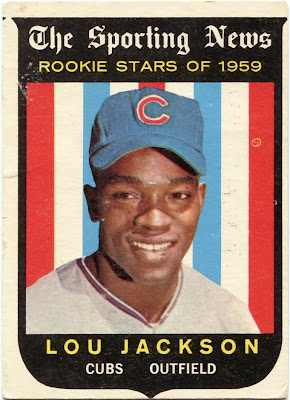 Tom also decided to include this sweet oldie in his PWE. Although I can't say I've ever heard of former Cub outfielder Lou Jackson, I'm sure I can find a use for this magnificent piece somehow.

After all, vintage always has a place in my collection. 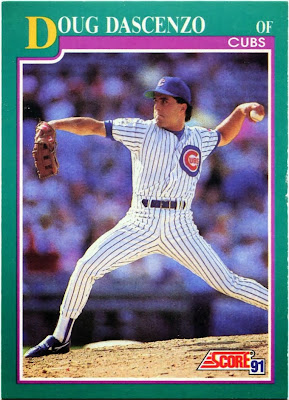 Surprisingly, a card from 1991 Score outshone both Dizzy Dean and glorious vintage in this PWE.

Now that's not something you can say every day.

As you can tell, this one features Doug Dascenzo (a former outfielder) on the pitcher's mound, presumably in the middle of his lone 1990 pitching appearance.

Somehow, I'd never tracked down a copy of this awesome piece. It's one of the more famous Cubs cards ever released, which made the lack of one in my collection kind of embarrassing to admit.

Thankfully, I don't have to worry anymore. 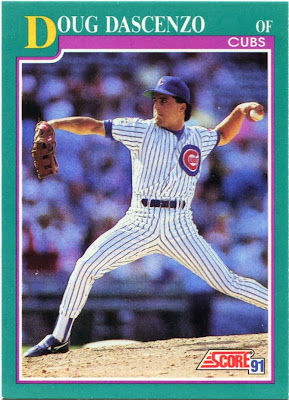 Hey, now I even have two in my collection.

After going years without tracking down a copy, I now have a pair of '91 Score Dascenzos in this household.

See, just before Tom sent along his copy, Bo of the fantastic blog "Baseball Cards Come to Life!" offered to send the famous card to me as well. It arrived on my doorstep the very same day as Tom's PWE.

It's funny how the hobby works out sometimes. 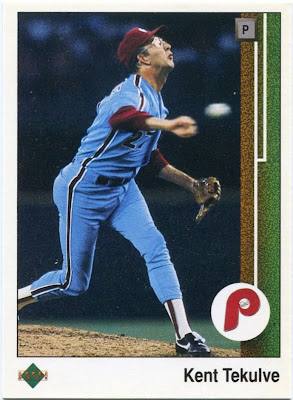 As far as finding great cardboard to send my way, Bo is a veteran.

He's already sent me a famous "blogger box", one that certainly resulted in a treasure trove of new goodies for my binders.

With this PWE, though, he may have set a new high water mark. As a former "Dime Box Dozen" need of mine, this '89 Upper Deck Tekulve is another card I've wanted for a while.

For one thing, it's the last piece I needed to complete my "sunset" collection of the former reliever. More than that, though, it's a terrific action shot of the sidewinding Tekulve, one that includes a beautiful nighttime backdrop.

All things considered, it's one of the better cardboard send-offs I've ever seen. 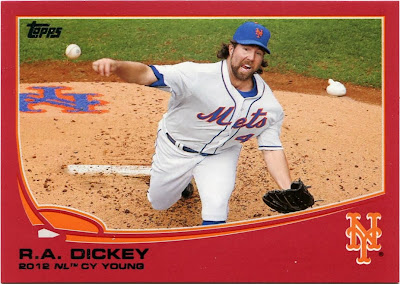 I feel kind of fancy when a PWE from Jeff of the spectacular "2 by 3 Heroes" arrives on my doorstep.

As far as I know, I'm one of the members of the illustrious "Club PWE", which is basically a list of people that aren't scared of having a little PWE randomness dropped into their mailbox every now and then.

I literally have no idea what to expect from one envelope to the next.

This red parallel of Mr. Dickey was most certainly a surprise.

Still, that was nothing compared to... 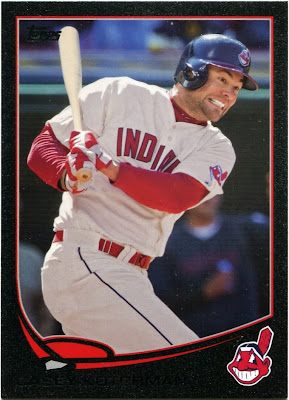 I remember Jeff pulling this Casey Kotchman black parallel earlier in the year and being supremely jealous of his luck.

I mean, what are the chances that a fellow blogger would pull this insanely limited piece of one of my favorite players? (Only 62 copies exist.)

Oh, and did I mention that I just so happen to be building a 2013 Topps Casey Kotchman rainbow?

In the end, I guess Jeff figured it'd be better in my hands than his. And I can't tell him how much I truly appreciate the kind gesture on his part.

As it stands, I currently own Kotchman's base, emerald, Wal-Mart blue, Target red, gold, and, thanks to Jeff, black parallels from 2013 Topps.

It's the farthest I've ever gotten with one of these crazy rainbow chases.

Don't be fooled by the insanely limited parallel madness, though.

No matter what, I'll always be a commons kind of guy.
Posted by Nick at 2:30 PM

What a coincidence! I just made MY first just commons purchase. Very cool site, 80+ cards for sixteen bucks or so, about half of which were Steve Finley cards. Very awesome. Definitely worth two posts, maybe even three.

Keep posting, I am a regular reader

Just Commons ought to give you a heck of a discount next time because I just placed my first order there as well. I had never heard of them before today, so thanks for mentioning a new place, that free shipping sure is nice.

Just Commons rocks for baseball. I picked up about 100 cards from there, with shipping, for about the cost of the blaster.

And, as long as Buck Martinez has his hands where we can see them, then I can't complain about that specific card.