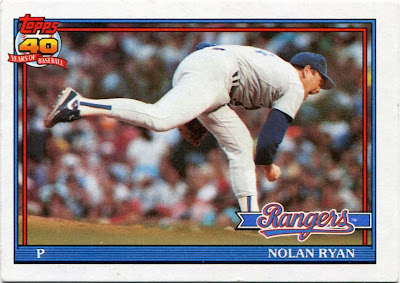 Moving into the '90s, we have what just may be my favorite "number one" of the overproduction era.

Nolan Ryan was no stranger to kicking off Topps checklists, doing so every year from 1990 to '92. In what is probably an unparalleled feat, he even received the first five cards in the 1990 Topps catalog. (A feat bested by Pete Rose in 1986, as I was reminded.)

For me, the best Topps set of the overproduction era is a constant battle between '87 and '91. While I love the classic 1987 wood grain borders, I tend to lean towards their 1991 effort.

It was probably one of the more revolutionary sets in Topps history, as it featured the first horizontal Flagship cards the hobby had seen since 1973.

I guess it's appropriate, then, that this "Ryan Express" would kick things off. It's a fantastic action shot, of course, but it also marked the grand return of something the hobby had sorely missed for nearly twenty years prior.

I'd bet most of us can agree that horizontal cards are almost always a huge plus.

Ah, not unparalleled, my good man. My boy Pete Rose garnered the first SEVEN cards of the '86 checklist. His base card followed by a four-per-card homage to his previous Topps cards.

Man... some of the 1991 Topps photography could be featured in museums. Great stuff.