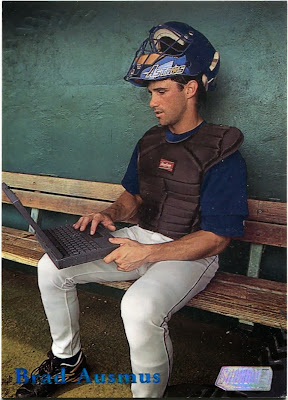 I think I may have found a new source for my impulse buys.

As I've mentioned in the past, Sportlots was my main source for scratching some of those cardboard itches. The site was responsible for pretty much all of the "impulse buy" posts I've written on this blog.

But, as I posted about last week, a fellow collector hipped me to a place called Just Commons via a recent PWE. (Thanks again, Corey!)

What I discovered from that site was almost hard to put into words. It was basically an untapped resource of awesome cardboard.

I'll probably still use Sportlots from time to time (I have another order lined up on there as we speak, in fact), but Just Commons is easily the better of the two. Way easier to navigate, free shipping on orders of ten bucks or more, and a bigger inventory. 'Nuff said.

So, having just received a paycheck earlier that day, I decided to go on a Just Commons prowl one evening a couple weeks ago. I spent a good three or four hours on this particular night digging through the site's goodies, pretty much filling up the cart to my heart's content.

After the dust settled, I'd found 125 new hand-picked cards for my collection for a grand total of 23 bucks. That's just about the same price as a blaster. And this buy kicked the tar out of any blaster I've ever opened, I'll tell you that.

While I love busting packs every now and then, the Internet allows us to have virtually any card at our fingertips. Some of my buys were cards I've wanted for a while, while others were ones I'd just discovered that night.

The Ausmus you see above was part of the latter. 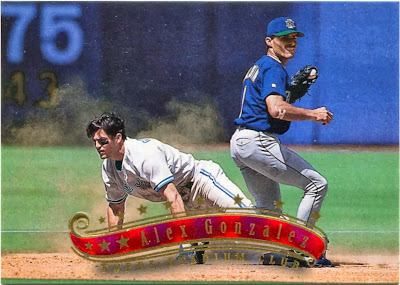 As I quickly found out, Just Commons has an absolutely excellent selection of mid '90s cardboard.

I've had a tough time finding much from that era at shows, flea markets, etc. As a result, I probably have yet to discover a lot of great cards from the mid '90s.

Shockingly, though, Just Commons had a ton available for extremely reasonable prices. The majority of the cards you'll see in this post hail from the mid-to-late '90s. And almost all were priced anywhere between 10 and 15 cents.

This '97 Stadium Club Alex Gonzalez is a card I'd just found out about thanks to a post by GCRL earlier this month.

Probably not an official "double dip", but a surefire beauty nonetheless. 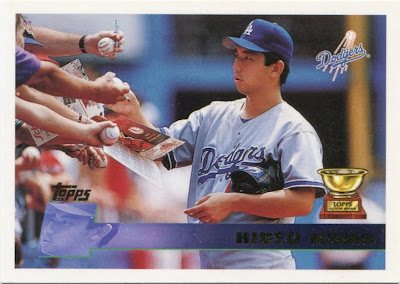 Here's a memorable card from the particularly unmemorable 1996 Topps.

Hideo Nomo was coming off his groundbreaking '95 Rookie of the Year campaign when this one hit the streets. Topps did a terrific job with capturing a bit of "Nomo-Mania" here, featuring the superstar signing for a hoard of autograph seekers.

It's definitely one of my new favorite "autograph" cards. 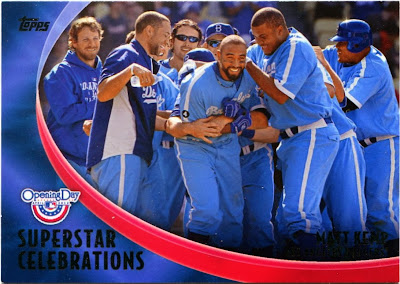 We just may have a new record for most throwbacks featured on one card. 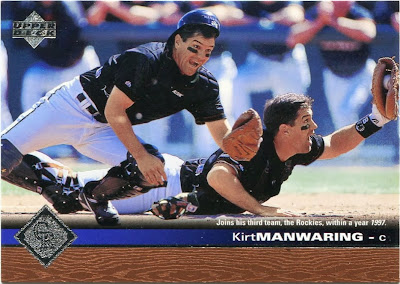 In keeping with the mini-collection theme, I felt compelled to pick up this great "multiple-exposure" piece of former Giant Kirt Manwaring.

While he's not a "binder guy", it'll no doubt make for one helluva frankenset staple. 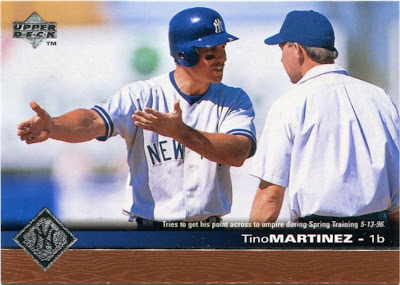 This was definitely one of the better cards I uncovered from the Just Commons archives.

Not only is this a rare new find for my "Say the Magic Word" mini-collection, but it's one that features a shot from Spring Training.

I guess I shouldn't be that surprised, though.

If we've learned anything this year, it's that Tino Martinez is one intense dude. 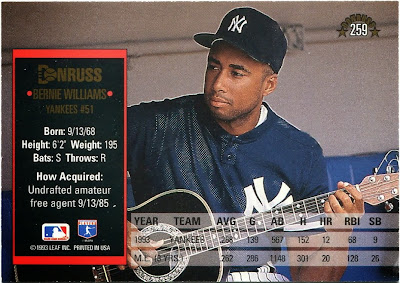 Here's a card I've wanted for a while now.

Bernie Williams already has a place in my fabled "Band of Cardboard". To my knowledge, though, he's the only one to have two different musically-themed pieces. 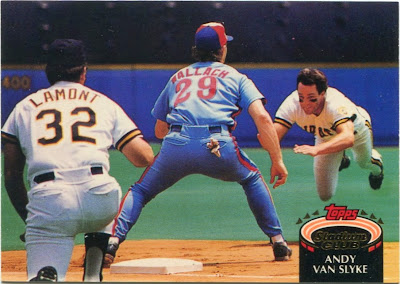 Tied for the cheapest card from my order, Mr. Van Slyke here set me back a mere eight cents.

I'm still amazed that something this great could ever be had for that price. 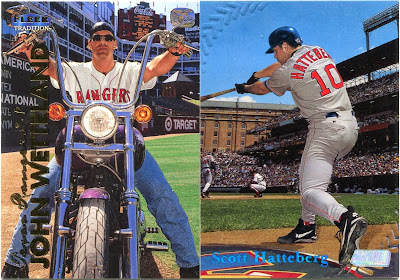 These, more than anything, feature how schizophrenic '90s cardboard was.

On the one hand, companies weren't afraid to be a little goofy and try something out of the ordinary. As you can see, Fleer chose to showcase former Ranger reliever John Wetteland on a tricked-out chopper in their '99 Tradition checklist.

At the same time, though, the '90s could be quite elegant.

Take a look at that Hatteberg there if you don't believe me. 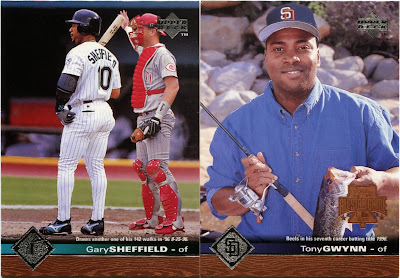 For me, one of the many perks of Just Commons was the fact that they had nearly the entire '97 Upper Deck checklist up for grabs.

These have been especially tough finds around these parks, which is sad for a set that has so much to offer.

The Sheffield is just the second card I own that features an intentional walk. (In case you were wondering, here's the other.)

Mr. Gwynn there is the second fish-themed issue I've been able to track down. I thought I found the only one in existence with my last impulse buy. 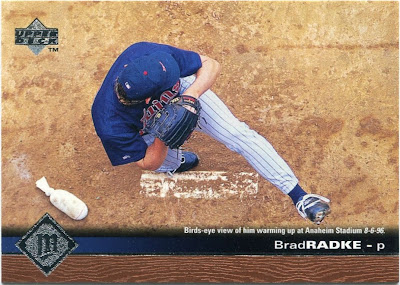 I could've probably done an entire post about the '97 UD cards I picked up in this order.

For now, though, we'll depart from the set with this tremendous birds-eye shot of former Twin Brad Radke. 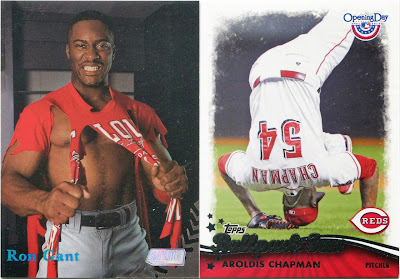 I couldn't resist snapping up these couple fun pieces.

Ron Gant went all pro wrestling on his 1998 Stadium Club issue. Sure, it may be corny. But I still think it's a great card.

The Chapman "Ballpark Fun" insert is a card I've wanted since Opening Day first hit the shelves. I'm a little surprised it took me until now to track down a copy.

It'll definitely be on my "Cards of the Year" list in a couple months. 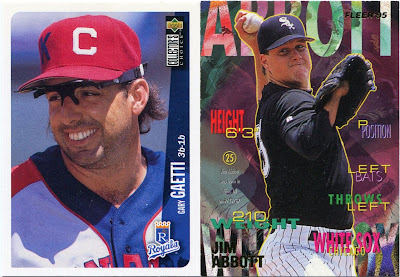 The Gaetti is a rather colorful "throwback" shot, one that features the old time Kansas City Monarchs jersey.

Jim Abbott only lasted a half-season with the White Sox during his first go-around on the South Side, which makes that one a prized "Short Term Stops" issue. 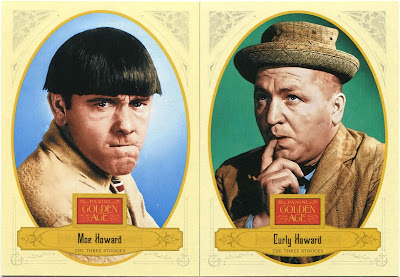 After about a year of waiting, I finally have the complete Three Stooges set from last year's Golden Age checklist.

I've loved the comedy team since I was a young lad. I've spent many nights cracking up over the famous slaps and eye-pokes.

Another blogger was nice enough to send me the "combo" Stooges card a while back. And I picked up Mr. Fine at this year's National.

Now, though, Moe and Curly finally have a place in my collection. Again, I'm surprised it took so long.

I guess I was just a victim of circumstance. 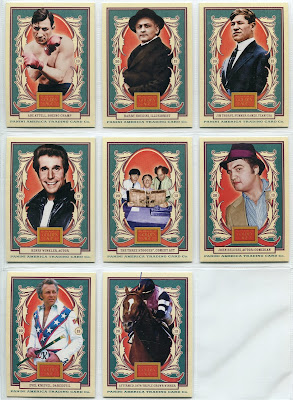 Another great quality of Just Commons is their selection of newer cardboard.

Heck, they already have 2013 Topps Update listed, which is impressive considering the set was only released less than a week ago.

While the mid '90s made up the heart of this order, I also managed to find quite a few great 2013s as well.

At the center of this near-complete page is yet another Three Stooges card, although they rightfully gave Shemp his time in the spotlight this time around. He's no Curly, but I've always been a big Shemp fan.

Also included in this awesome non-sport selection is former prizefighter Abe Attell, a man who would later be at the heart of the 1919 Black Sox scandal. And let's not omit names like Harry Houdini, Evel Knievel, and "The Fonz".

I can't thank Panini enough for including John Belushi in this checklist, either. 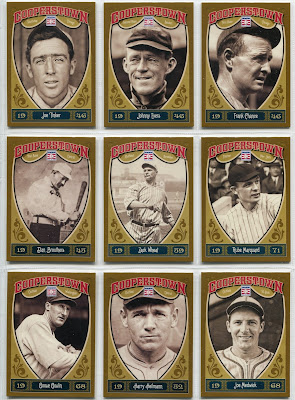 I landed quite a few 2013 Panini Cooperstown singles in this order as well.

While I'm not entirely sure yet, there's a good chance that I'm actually enjoying this year's edition of Cooperstown better than last year's inaugural release.

Being a Cubs fan and all, I couldn't help but pick up the hallowed Tinker, Evers, and Chance combo. 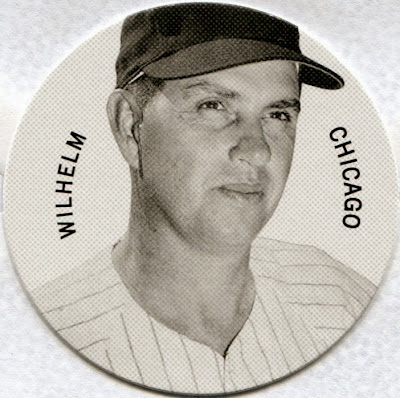 The two cards you're about to see proved to be the two priciest from this order.

Mr. Wilhelm here was the runner-up in that department. This sweet Colgan's Chips insert of his from 2013 Cooperstown cost a whole 65 cents.

It's easily one of the coolest Hoyt cards I've picked up in a long, long time. 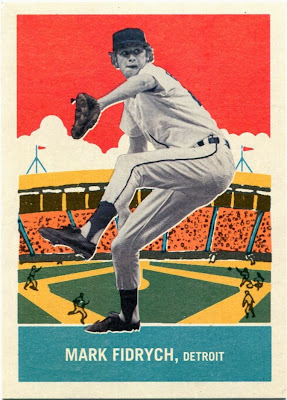 Not to be outdone, this beautiful insert of "The Bird" set me back an entire dollar.

Even though it was the most expensive card of this lot, I'd say it was still a heck of a steal. Also an insert from 2013 Cooperstown, this "DeLong Gum" series features some of the best personalities in baseball history.

Of course, you don't have to look much further than Mark Fidrych on that topic.

Even with all the more modern goodies I featured here tonight, Just Commons also has a pretty darn awesome selection of '80s cardboard.

I've found it very easy to fill up a blaster worth of cards there. In fact, I've got a bunch of them sitting right next to my computer waiting for me to scan and blog. I'll probably get to that once I get through my Jumbo Update.

JustCommons has been my go-to site for lower end parallels/inserts for years. There have been a ton of 90's products added/restocked in the last month or two, and you really can't beat the prices.

Your last post about Just Commons sent me there for a $10 impulse buy of my own. Definitely worth it. Great resource.

I opened up a JC mailer just today too. I've picked em pretty clean of Reds, 10 bucks at a time. A lot of kudos to the free shipping.

So happy you're enjoying the justcommons site. I love the site. It almost feels like an "online" dimebox.
-Corey

Good thing you picked up that Andy Van Slyke card.

You could blow another 8 shiny Lincolns and hook up this guy in Canada who wants it. Except he wants more than one of it. He wants all of them.