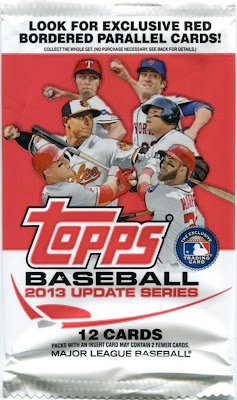 I've been known to be a bit impatient when it comes to this hobby.

True, I have gotten better with it lately, but I'm not fully cured just yet.

For starters, you'll probably have a heck of a time trying to focus my attention on anything in the midst of an upcoming card show. I'm already starting to zone in on the show that'll be hitting my town in a little over a month. Impatience at its finest.

It's kind of the same thing with new sets. There aren't that many new releases that make me go head-over-heels these days, but the three Flagship sets each year are definitely in that fold.

I've bought a hobby box of Update every year since 2007. It's a tradition that'll be continuing in 2013, as I already pre-ordered my box. I'm crossing my fingers that it'll arrive sometime this week.

Still, I caught wind of Update's appearance on retail shelves a couple days ago. And, even though my box should be here any day now, I had to go see for myself. You know, because of my impatience and everything.

A quick check on Tuesday yielded jack squat. After my dreaded seven-hour school day yesterday, though, I decided to take another quick peek. Lo and behold, there they were.

Update had officially hit the shelves. 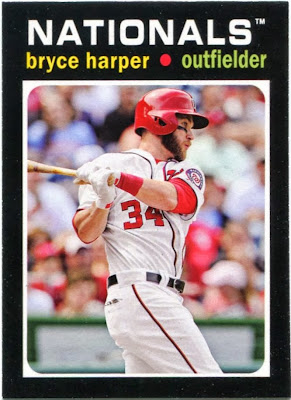 While I pondered buying a bit more, I limited myself to a hanger box and a couple loose packs.

I won't go too far in depth with my pulls since the real Update show on this blog will be that hobby box I'm expecting. Still, this little personal preview purchase was a nice first taste of the set I love so much.

I was lucky enough to pull one of "cover boy" Bryce Harper. 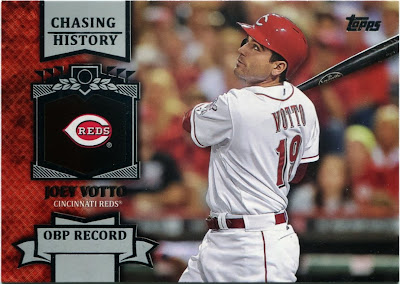 Yup, these "Chasing History" inserts are back for Update.

I collect Joey Votto and all, but... 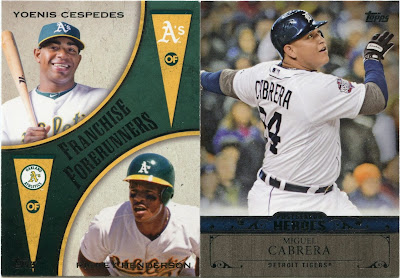 Both the "Franchise Forerunners" and "Postseason Heroes" series are new to Update.

With the Cabrera insert, my "cover boy" count is up to two.

While this year's edition isn't all that badly-designed, I don't know why Topps continues to drag out the whole multi-player insert theme. They've been doing it for a few years now, and I'm still not on board. 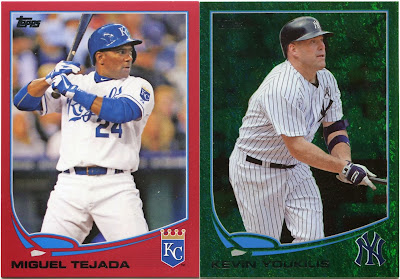 Parallels are alive and well in Update.

And, in a curious turn of events, I pulled a couple I actually need. I've never had the best of luck with parallels in that regard.

In a few years, I'll bet most of us will forget that Miguel Tejada was ever a Royal. (Hopefully, we'll forget that his career ended as the result of an amphetamine bust, too.)

And I doubt we'll remember that the "Youk-er" was once a Bronx Bomber. 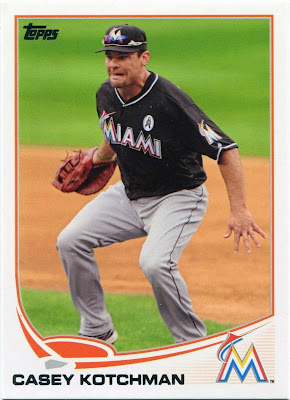 For now, let's move on to the real meat of Topps Update.

Good ol' commons are the reason I've bought a box of Update for the last seven years. After all, it's the first we get to see of a lot of guys in their new duds.

While I doubt it drew the interest of many other collectors, I was ecstatic to see Casey Kotchman's name pop up on the Update checklist.

Okay, so maybe he wasn't quite deserving of a card in the set. After all, the guy played in exactly six games this year, going hitless in what'll probably be his lone season as a Marlin.

But, hey. He's one of my favorite players and I'm glad to see him represented. This was one of the main cards I was hoping to pull going into my upcoming Update breaks.

I'm probably the last collector on Earth who still gets excited about Casey Kotchman cards.

But I'm proud of that. 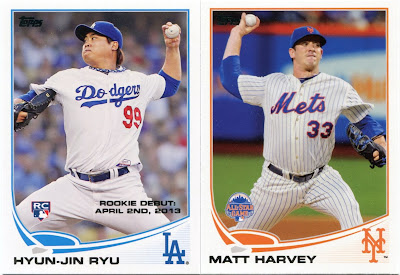 While I'm not a "prospector", Update is a great source for the game's newest young guns as well.

The "Rookie Debut" subset makes a return in this year's checklist, as we have with the Ryu. While I've always liked the theme, I kind of wish Topps would bring back their "Major League Debut" concept from the early '90s.

Now that would be an all-rookie set I could get behind.

At card #1 in this year's checklist, Matt Harvey is my third and final "cover boy" from these breaks. It features a great shot of the National League's All-Star starter. 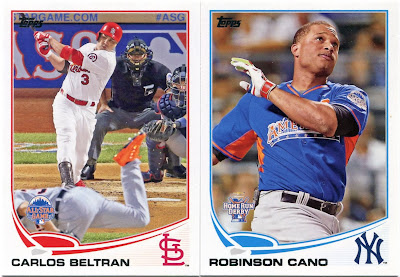 These All-Star cards are another of Topps Update's many great features.

Complete with the "ASG" banner in the backdrop and Max Scherzer's fluorescent orange shoes, the Beltran is a simply stunning shot from this year's Midsummer Classic.

They're more exciting than the event itself. 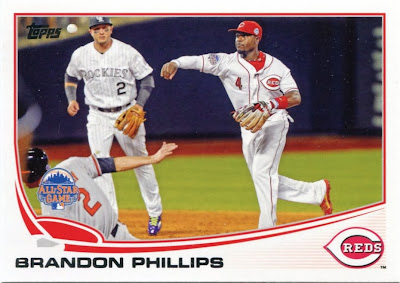 With J.J. Hardy, Troy Tulowitzki, and Brandon Phillips all in the same frame, this is one of the more star-studded "double dip" shots you'll ever see.

It's a great little mini-collection hit, to say the least. 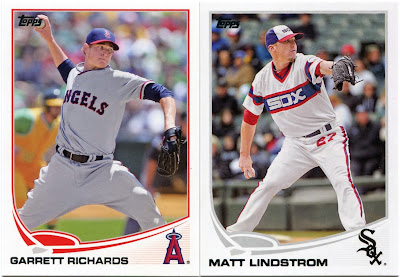 As a matter of fact, there were quite a few mini-collection finds in these breaks.

While I've never been a big fan of '80s White Sox jerseys, it was awesome to see them featured in this year's Update series. As I always say, any throwback is a good throwback.

As if the spiffy retro Angels jersey wasn't enough, I spy a lurking A's throwback behind Garrett Richards as well.

It's the ever-rare "double retro" combo.

Surprisingly, though, neither of these proved to be the best throwbacks I'd pull. 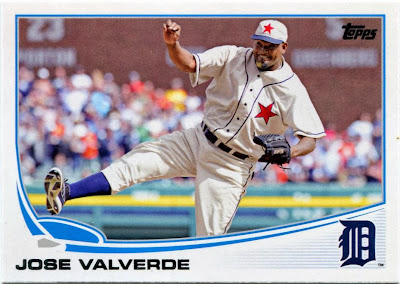 I find it curious that Topps even granted Jose Valverde a spot in this year's Update checklist. After all, the Tigers released him in early August.

But, seeing as how they gave him such an unquestionably spectacular throwback shot, I'm not complaining in the slightest.

In case you're wondering, these particular jerseys are a tribute to the old Detroit Stars franchise of the Negro Leagues. 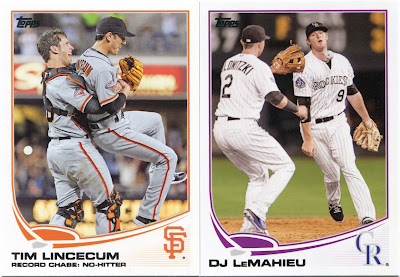 If the Valverde didn't tip you off, this year's running theme of great photography is back in Update.

That's the second Troy Tulowitzki cameo we've seen in this post. Topps turned a routine flip to second into a thing of beauty there.

In my opinion, Topps couldn't have chosen a better shot to chronicle Tim Lincecum's 2013 no-hitter. And, while we're on the topic of cameos, the "Buster Hug" is one of the better examples of those in recent memory.

Mr. Lincecum is definitely in the running for a spot in my top ten cards of the year. 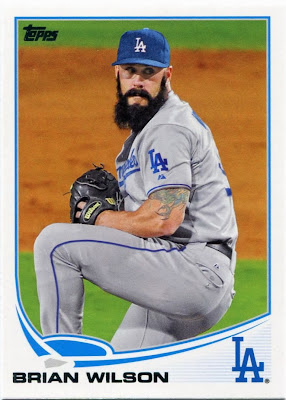 This one, though, is pretty much a lock to make that list.

Given that he didn't make his 2013 debut until August 7th, I didn't think there'd be enough time for Topps to slot Brian Wilson into their Update checklist.

But, even though it looks like they went the way of photoshopping here, it's my pleasure to present the first-ever card of "The Beard" in Dodger blue.

I'll admit, it's weird seeing Wilson in anything other than a Giants jersey. That said, I can't imagine how strange it must be for Dodger fans. Coping with a guy who was such a hated rival wearing your team's colors has to be tough.

I'm sure a few Dodger collectors will be quite torn when the time comes to add "The Beard" to their collections in the coming weeks.

Because of all that, it's one of the more memorable Update cards I've seen in a while.

While I had a ton of fun with this little preview, it's really just the beginning. Expect a full-on Update bonanza around here in the near future.

All I need now is for that box to get here.

I think update is my favorite of the three flagship offerings. Lots of rookies and lots of all-stars. Good stuff.

That Lindstrom card is my favorite of this post, and the cameo-filled Phillips card is great as well.

The Brian Wilson was definitely photoshopped. All the way from August 2011.

I've already looked into the Cubs cards and Topps used photos from as recent as July. The Beard must have just missed the cutoff.

I look forward to Topps update each yr. I bought few packs and will buy some more. The number of all star cards can be excessive. To make them more appealing, I think they should have the players career all star game stats on back. my take

keep an eye out for the Braves cards when the Hobby Box comes in ... you'll like 'em