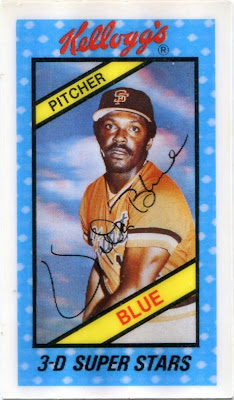 As I mentioned last night, the contents of my very first Just Commons purchase arrived on my doorstep recently.

Even so, the site has a tremendous selection of relatively older cardboard from the '80s as well. Everything we'll be looking at tonight hovers around my personal vintage-modern era border.

Naturally, oddballs were one of the very first things I searched for on Just Commons upon arrival. If a site has a good selection of oddities, I figured, it'll probably have a lot of other stuff I'd like.

As it turns out, I was in luck.

They had quite a few 1980 Kellogg's singles in stock. And, as usual, they could be had at bargain-basement prices.

Vida there set me back a mere 40 cents. 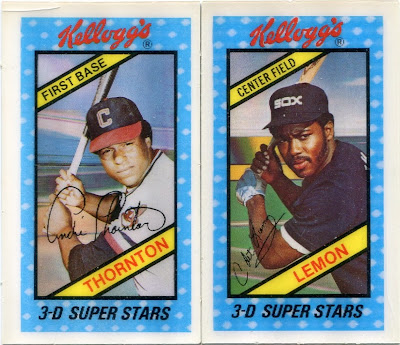 These two beauties were listed at just 20 cents a piece.

To put that in perspective, I nabbed three vintage Kellogg's cards for less than a third of a pack of something like Gypsy Queen or A&G.

I especially enjoy reading the backs of these oddballs, as they list a few of each ballplayer's favorite hobbies.

According to Kellogg's, Chet Lemon is an avid Greek mythology buff.

There's your fun fact for the day. 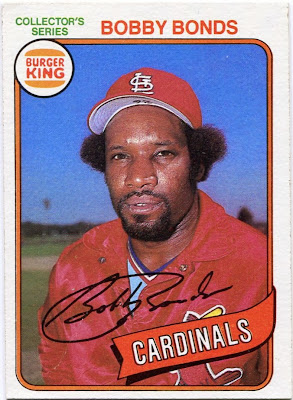 These neat Burger King oddballs continued with the food theme.

According to Just Commons, these are from some sort of "Pitch, Hit, and Run" promotion held by the food chain, although I'm still not exactly sure how they were distributed.

In some ways, it was like an Update checklist for 1980 Topps. After all, Bobby Bonds is featured as an Indian on his standard '80 issue. Here, though, he's shown as a Cardinal. (And, unlike the '76 Topps Traded checklist, it doesn't look to be an airbrush job.)

Quite an innovation by Burger King, of all companies. 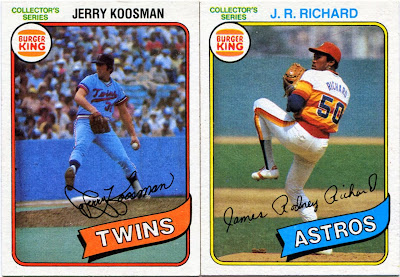 While the Bonds is my favorite, I couldn't stop myself from picking up a couple of the other Burger King cards Just Commons had to offer.

I've always been big fans of both Koosman and Richard, so these were pretty much no-brainers for me.

With the Bonds, the three Burger King singles I picked up totaled less than a buck. 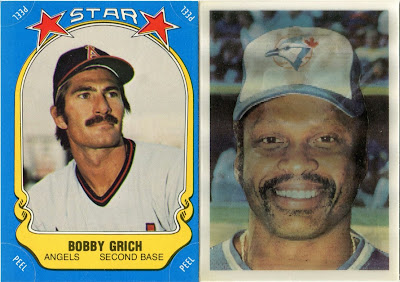 These are more controversial oddballs, if such a thing exists.

Fleer continued their "Star Stickers" series for quite a while after their 1981 debut, so they're not all that scarce. Personally, though, I've always placed them in the oddball category.

The same goes for Sportflics, a neat 3-D company who hung around for a few years in the '80s and early '90s.

Oddballs or not, these were both cards I needed to have.

Plus, it's not every day you see Al Oliver in Blue Jays gear. 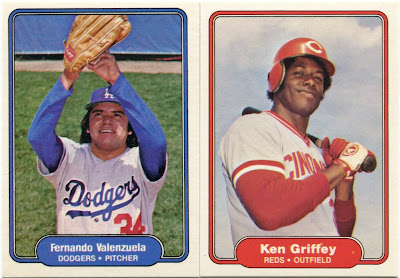 As their name might imply, though, Just Commons has a terrific selection of your standard '80s base issues as well.

I helped myself to a few singles from the lovable 1982 Fleer checklist during my prowl through the site. Even though it's often ridiculed for slightly amateurish photography, these are certainly a couple of nice shots.

I'm guessing Fleer hired someone like Manute Bol to take that shot of Mr. Valenzuela. 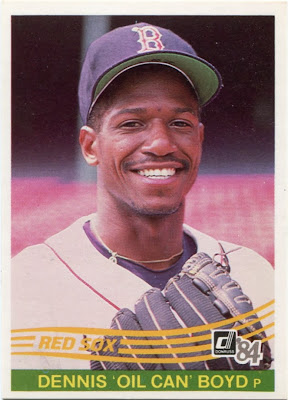 To me, Donruss never came close to matching their 1984 checklist.

It was far and away the greatest effort in the brand's history. Oddly, though, it's probably the most under-represented year of Donruss in my collection.

I've heard rumors of scarcity in regards to this set, and I tend to believe them. I've had little problem finding cards from '83 or '85 Donruss, yet anything from 1984 always seems to elude me.

Again, Just Commons came to the rescue. Their archives included a slew of '84 Donruss singles, including this early Dennis Boyd.

They'd take to simply calling him "Oil Can" later on in their history. 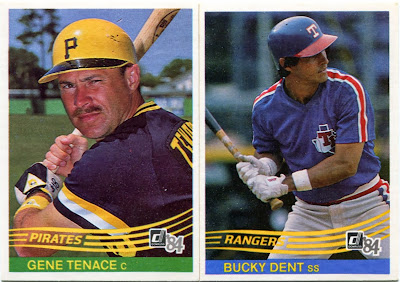 These complete a couple of "sunset" collections for me.

Both Gene Tenace and Bucky Dent received their final cards in 1984 in fairly unfamiliar uniforms. I don't see Tenace get much recognition for his Pirate days.

The same goes for Dent as a Ranger, although it should be noted that the infamous hero actually ended his career as a Kansas City Royal in 1984. 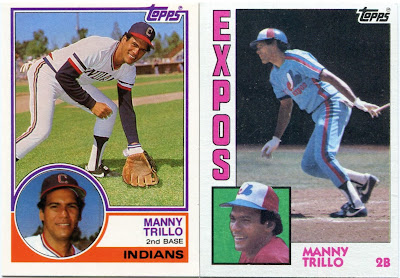 To this day, I'm still not entirely sure why I collect Manny Trillo.

Maybe it's simply the cool name. Either way, I've had a lot of fun picking up his cards over the years. The man wore his share of unfamiliar uniforms as well.

Trillo played for both the Indians and Expos in 1983. That '83 Traded issue is my first card of him as an Indian, while the '84 Topps is just my second card that features him as an Expo. (There's another Cleveland issue of his on my "Dime Box Dozen" list.)

Here's to you, Manny Trillo.

Even if I'm still not exactly sure why. 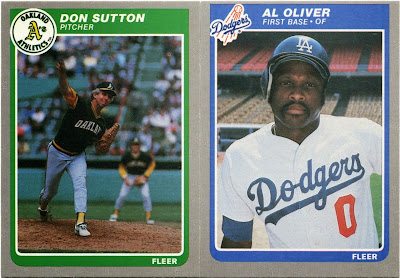 While we're on the topic of unfamiliar uniforms, here's a couple '85 Fleer Updates I scored in this purchase.

Both Don Sutton and Al Oliver spent parts of the 1985 season in the uniforms they're wearing here. They'd both be with new teams by the time the '86 season rolled around.

While Oliver as a Dodger has always looked a little off, Don Sutton as an A has always been wildly unfamiliar to me.

Seeing him in the green-and-gold just never seemed right. 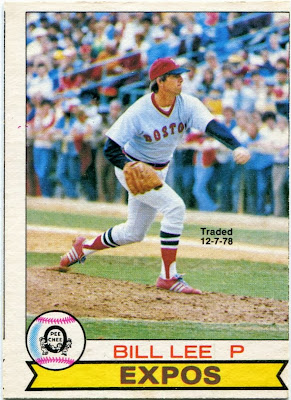 If there was one overarching theme to my very first Just Commons purchase, though, it came in the form of some of my absolute favorite oddballs. 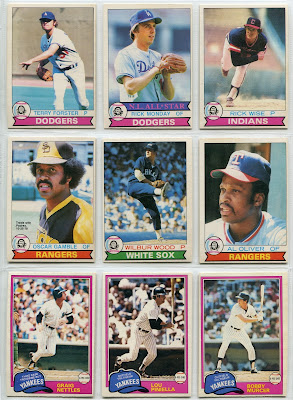 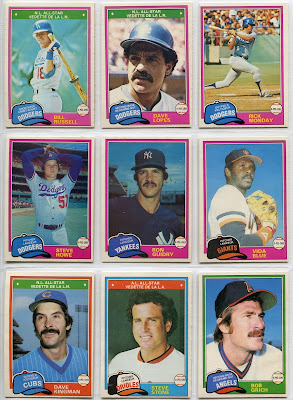 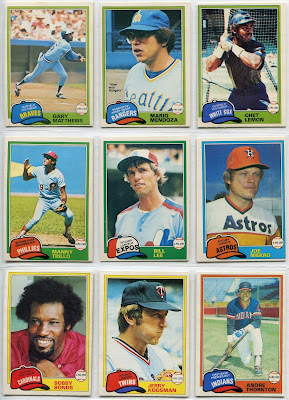 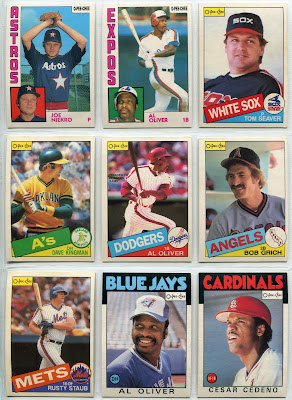 As it turns out, Just Commons has the single greatest selection of O-Pee-Chee I've ever seen.

Although the total price for this purchase was 23 bucks, I actually meant to stop myself when I hit the $15 mark. That was before I stumbled upon the OPCs, though. I couldn't resist loading up on these Canadian beauties.

Unbelievably, the vast majority of the cards you see above were priced between 10 and 15 cents a piece. 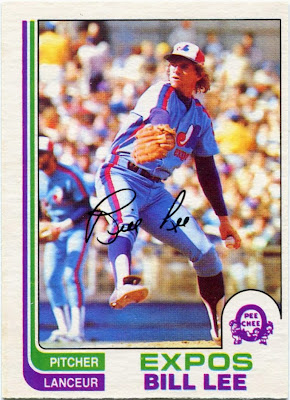 That includes all three of the "Spaceman" OPCs I scored.

I've long dreamed about owning this particular piece, as it's the Canadian version of Lee's "sunset" issue.

Well, that just about caps off my first venture into the Just Commons universe.

My Just Commons career isn't even close to being over yet, though.

You see, on the very same day these arrived on my doorstep, I placed another Just Commons order. And this one could well be even greater than the first.

Would the OPC fun continue?

You'll just have to wait and see.

Until then, do yourself a favor and go check out Just Commons.

You'd inspired me to make a Just Commons purchase, and half of it was OPC stuff. I'm still gonna post about it, but geeze, give a guy a break wouldja!?

And, seriously, stop buying 1984 Topps! I probably have 10 copies of that Manny Trillo. Next time you have the urge to buy '84 Topps, shoot me a quick email and I'll hook you up.

I love the food issues - especially KELLOGG'S (see my blog).

I still don't know why OPC cards aren't more sought after. If you need any from the early 80's, I have a bunch.

Next time you have the urge to get 82 Fleer, let me know. It was my first real set, and I have quite a few extras lying around.

I have made a few purchases on Just Commons and they are great. Inspired by your post yesterday, I place a pretty high dollar (for that site) order and scored me some insert set needs from 2012 and 2013 along with a few Giants. Post to follow.

If you make an order over $50, you can get a 10% discount in addition to free shipping by typing DISCOUNT in at checkout.

My favorite card in this post is far away the Bobby Bonds - love the hair and the Cards uni.