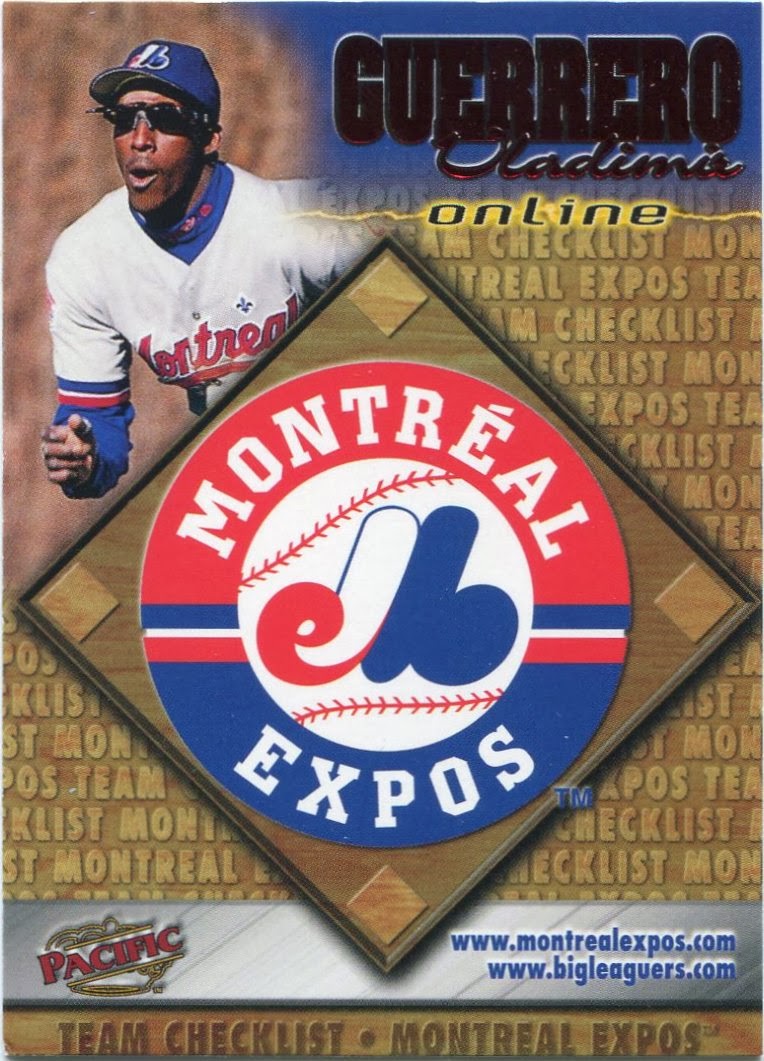 Once upon a time, I was a member of a trading forum.

I'd make specific trades with other people. They get this, and I get that. I knew when I had to mail packages, and I knew when they were coming.

That meant that during trading dry spells, I knew not to expect anything in the mail. I'd go downstairs mailbox with 100 percent certainty that there wouldn't be anything for me.

Do I make specific, hammered-down trades now that I'm a tenured blogger? Sure do. And I enjoy them.

But what really makes the trading world of the blogosphere so special is the fact that I literally have no idea what to expect on a day-to-day basis. I may not think I'm due to receive anything in the mail, but then, boom, there's an envelope with my name on it.

Almost every one of the cards you'll see in this post had that "surprise" factor to them. And we start off with perhaps the king of surprises here in the blogosphere, Jeff of the awesome blog "2 by 3 Heroes".

For about the scagillionth time, he dropped an unexpected PWE on my doorstep, one that featured the Vlad you see at the top of the post. (I don't care what anyone says. I like Pacific Online.)

I'm sure it won't be the last time I get an envelope from the "PWE Club" foreman. 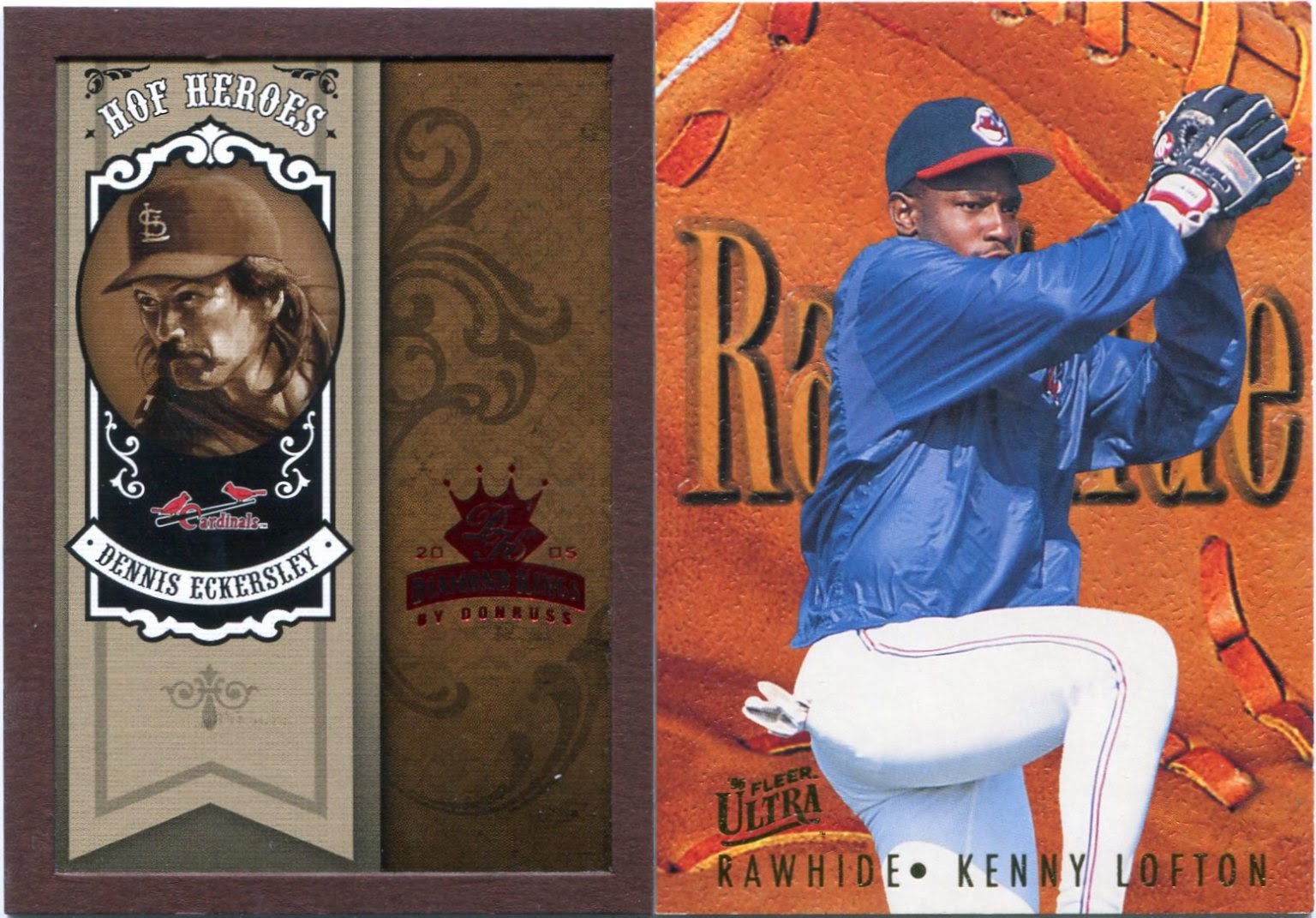 Another generous soul here in the blogosphere is T.J., the author of one of the best blogs around in "The Junior Junkie".

He was kind enough to hold a little giveaway to honor Ken Griffey Jr.'s birthday back on...let's see...November 21st?!?!

I really need to get caught up with some of these trade posts.

While I'm way late in showing these off, I hand-picked these two glorious inserts from T.J.'s pot. And, although I knew these were coming my way in the mail, Mr. Junkie himself recently dropped one heck of a cardboard surprise into my mailbox. 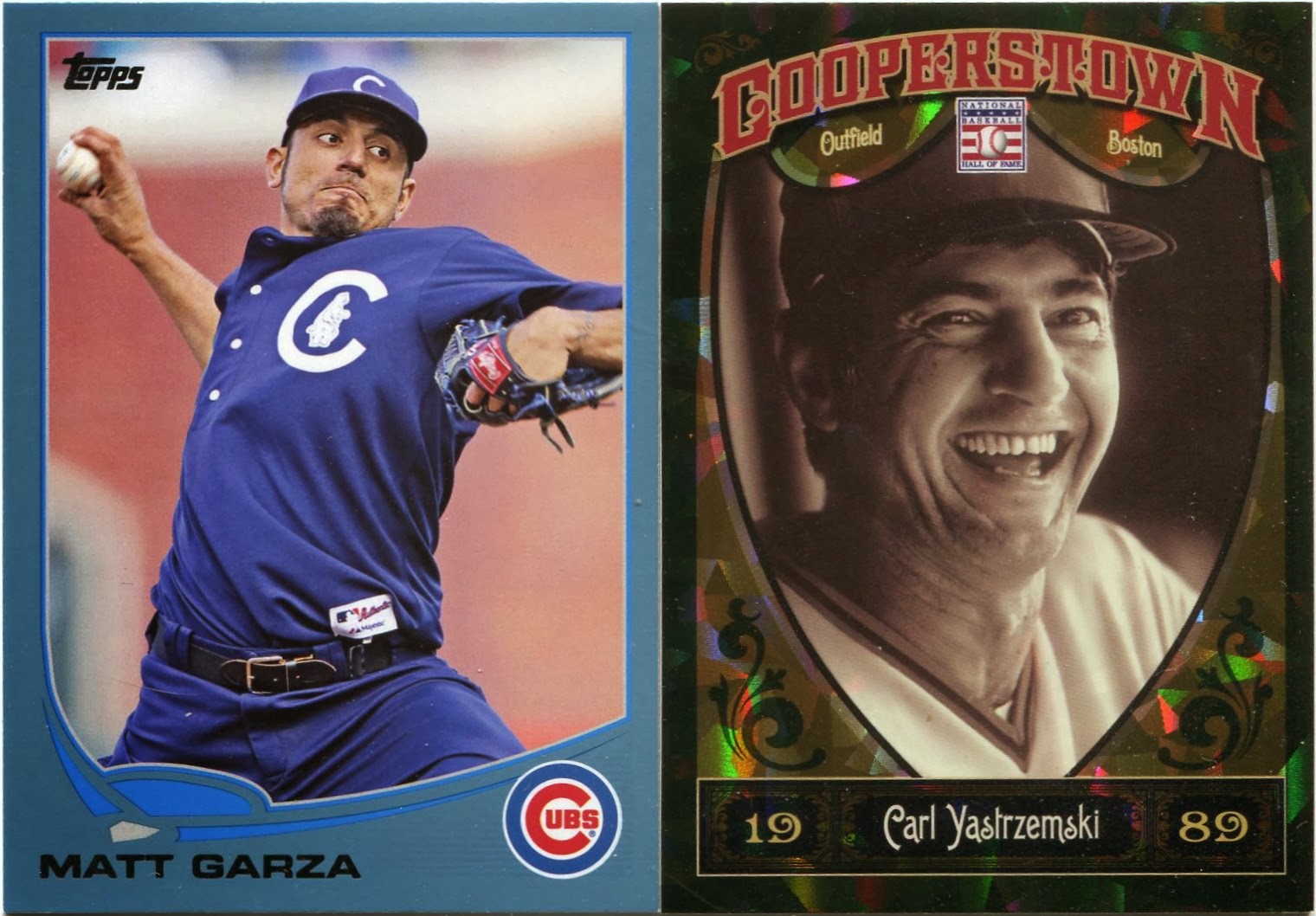 It's nice to know that I'm surrounded by at least a few other Cubs fans here in the blogosphere.

One who I've gotten to know recently is Tom of the terrific blog "Waiting til' Next Year".

He also dropped a PWE on me out of the blue a while ago. I think I might've actually asked for the Garza in one of Tom's past posts, but I'd forgotten about it until this envelope hit my mailbox. It's a wonderful new addition in my half-hearted quest to complete a Garza rainbow.

While I'm a big "Yaz" fan, I have no desire to complete his Panini Cooperstown rainbow. But that "cracked ice" parallel is a head-turner, no doubt.

Like T.J., Tom also sent me another special package that you'll soon see on the blog. 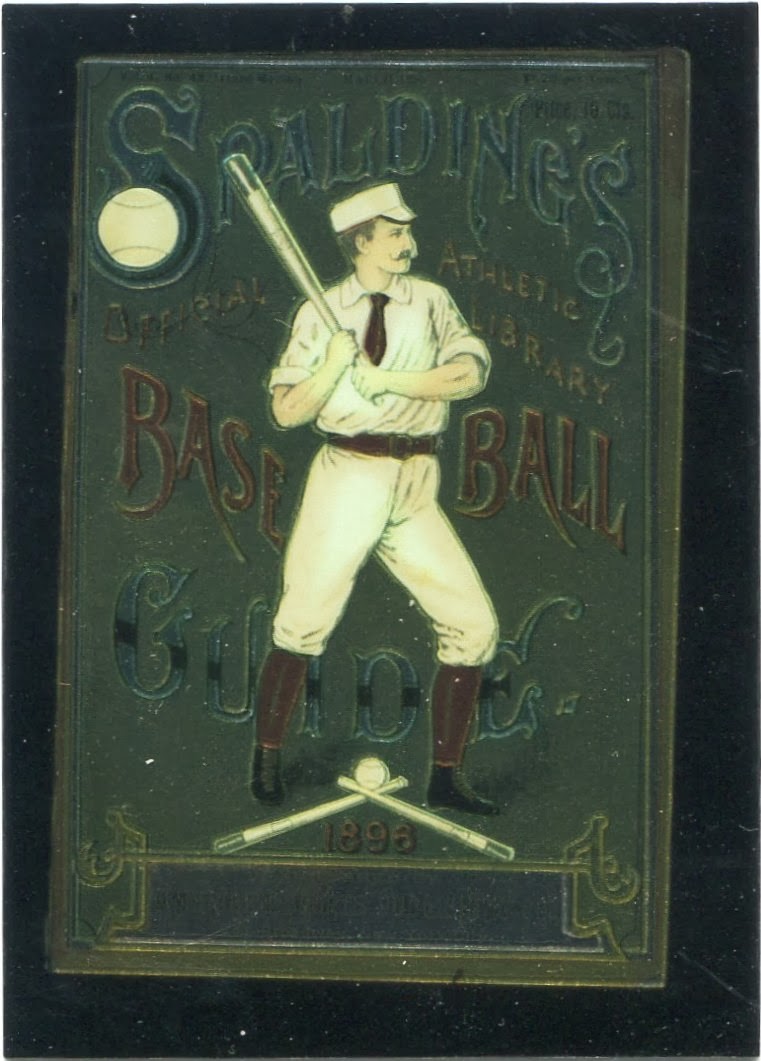 If, unlike me, you have some spare cash to donate towards a good cause, hop on over to Chris's great blog "View from the Skybox".

He's holding a charity break for the victims of Typhoon Haiyan. Although it's hard for me to scrounge up any kind of extra cash, Chris was still gracious enough to send a nice PWE my way a little while back.

The standout piece, shown above, features a Spalding Baseball Guide from 1886. It's from the Phil Rizzuto's National Pastime checklist, one that comprised the bulk of a recent trade package I received.

If anyone happens to be sitting on any more of these jaw-dropping beauties, I only ask one thing. 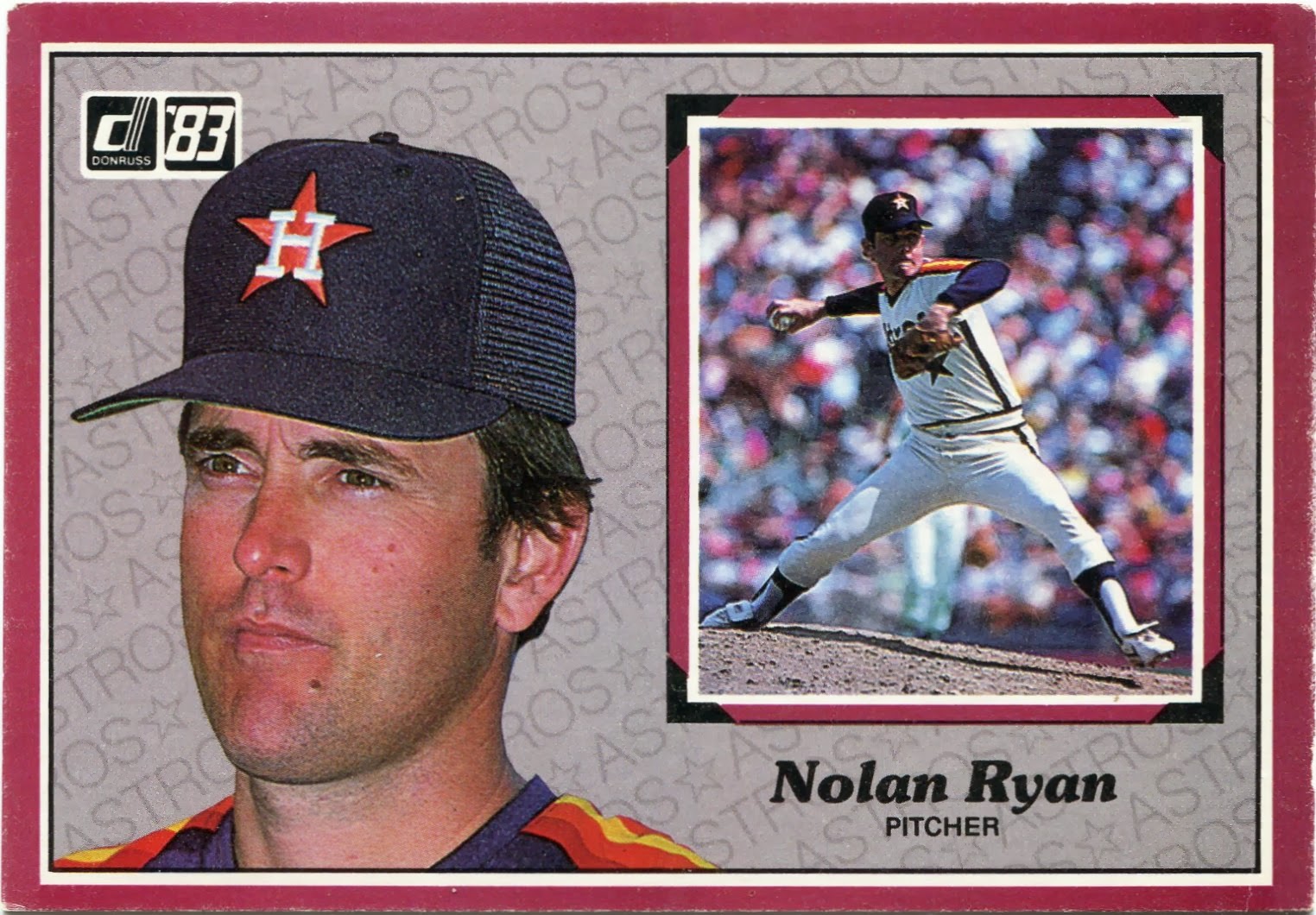 If you read this blog, John of the spectacular "Johnny's Trading Spot" might be familiar to you by know.

He's sent me not one, but two flat-rate boxes of fun recently. And he followed those up with the neat oversized Nolan Ryan you see above, the spoils of a recent contest I won on his blog.

John also included a nice Christmas card with the "Ryan Express", something I'd never had happen before with a blog trade.

It only took me exactly a month after the holiday to post about it. 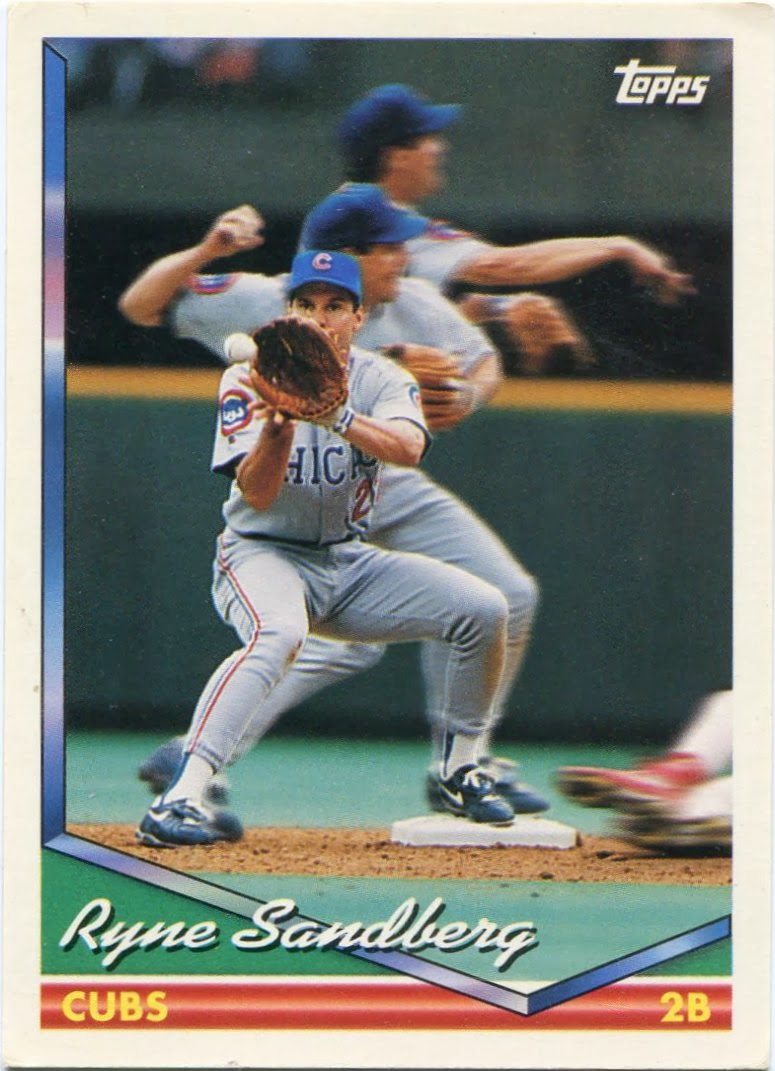 Bo of the super blog (I'm running out of adjectives here) "Baseball Cards Come to Life!" recently took on the role of hitman by knocking out one of my "Dime Box Dozen" needs.

We've pulled off a couple mega-trades in the past, but I appreciate Bo dropping a one-card PWE on me just the same. And what a card it was.

Topps was nice enough to give "Ryno" a combo mini-collection hit in 1994, as this former need of mine fits nicely under both my "multiple-exposure" and "double dip" themes.

It's a pleasure to finally have it off of my "Dime Box Dozen" list. 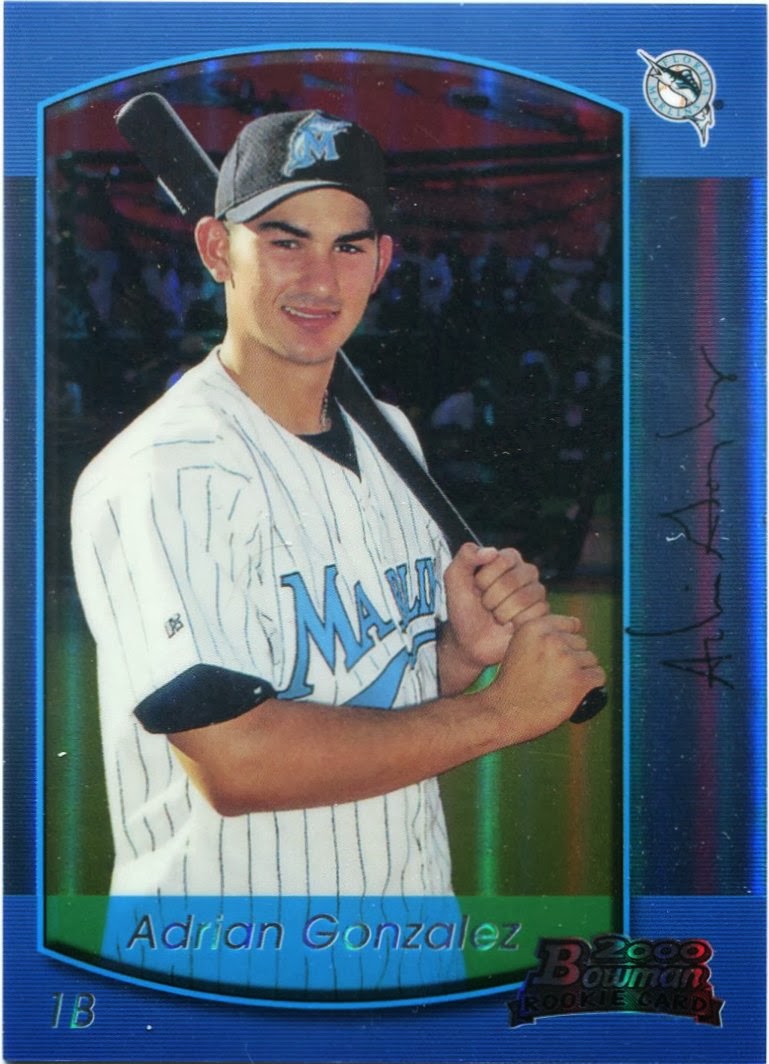 Art was never one of my better subjects in school.

I never thought of it as all that captivating, either. However, a new blogger in town has made me appreciate the world of art by combining it with the wonderful world of baseball cards.

You might have already seen some of Gavin's work on the awesome "Baseball Card Breakdown". If you haven't, go check it out now. There's something for everyone to like.

And, wouldn't you know it, I won a recent contest on his blog.

This nifty Adrian Gonzalez reprint refractor was in Gavin's prize pool, so I jumped on it. I did indeed shell out a few bucks for the original at one point, but it wasn't necessarily because I wanted an "A-Gon" rookie that badly.

No, the real reason is because despite being a #1 overall pick in 2000, Gonzalez never actually played for the Marlins. Gavin also sent along a few surprise Cubbies with the Gonzalez.

The Grace is one of the shiniest cards you'll ever see, courtesy of the Pacific brand. Oh, how I'd like to see a Pacific revival in 2014.

The card on the left, however, is one of Gavin's artistic custom creations. It's hard to tell from the scan, but Mr. Wilkerson actually glows in the dark.

Needless to say, I've never been so much in awe over something from 1990 Donruss. 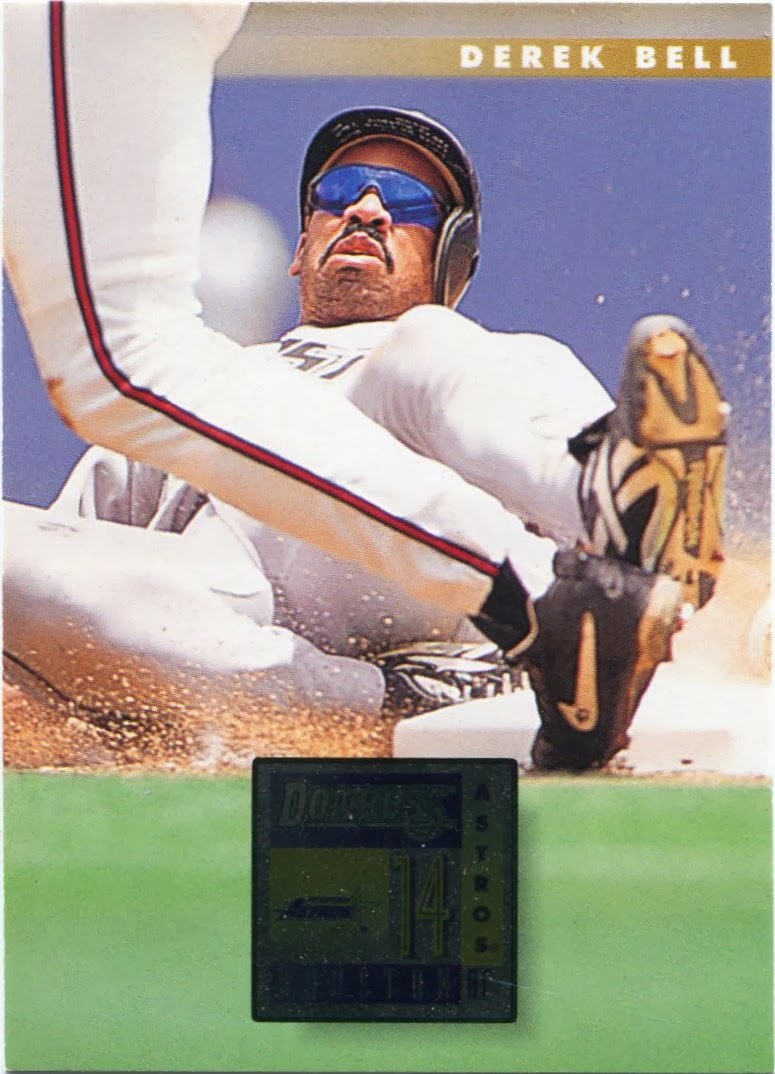 My good buddy William of the fantastic blog "Foul Bunt" was nice enough to drop a few things on me recently.

I've said this many times before, but William was one of the first people to show me how special the blogosphere was.

He's easily one of the more generous bloggers I know. Though I've been trading with him for almost two years now, he still surprises me with each passing package.

From what he tells me, William likes to hunt for random little goodies to send my way.

This "derp" card of "Operation Shutdown" himself, Derek Bell, made me chuckle. 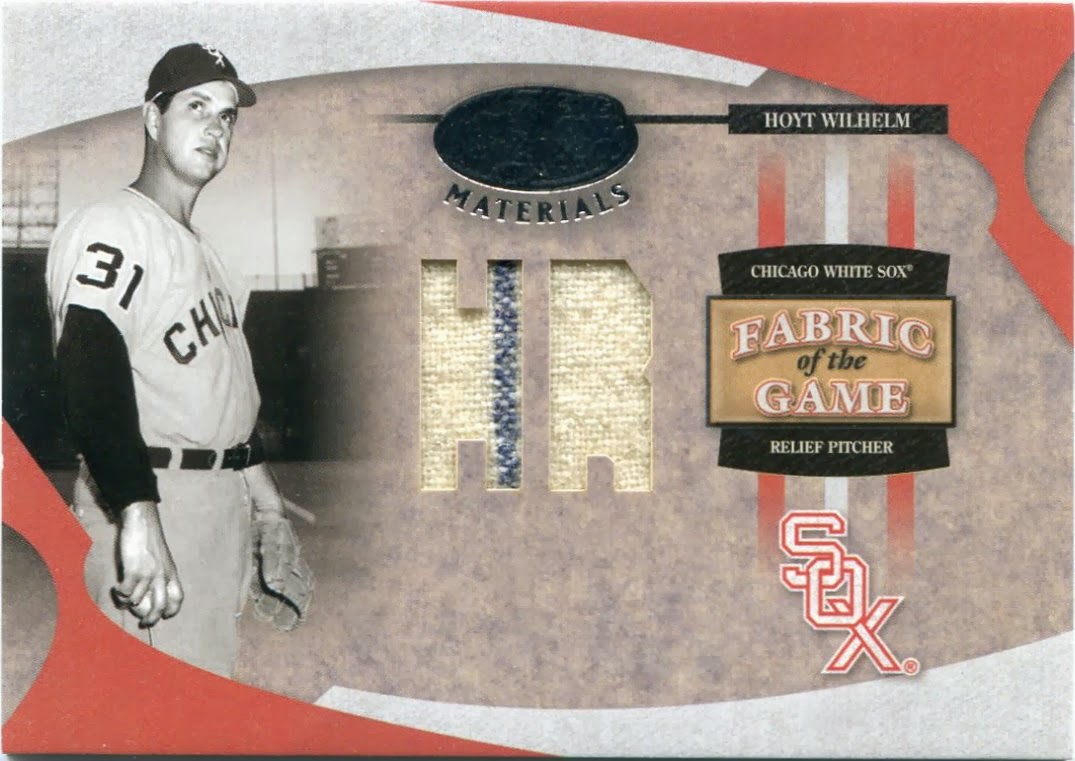 On top of that, William likes to pull out the big guns on a regular basis.

I know he's added more cards to my Hoyt Wilhelm collection than anyone else I've traded with. I'm still not sure how he manages to hunt down so many good ones.

I'm not big on jersey cards anymore, but I can't help but get excited when a new one of Hoyt finds its way into my clutches. Especially one with a pinstripe.

This is the fourteenth memorabilia piece in my Wilhelm collection, and a rare one at that. It's limited to just 25 copies.

And it was a complete surprise from the ever-generous William.

This sort of thing is what makes me honored to be a part of the blogosphere.

Looking back on it all, my time on the trading forums seems so archaic.
Posted by Nick at 5:10 PM

I have dozens of unopened packs of those Rizzuto cards! Shoot me an email if you want some!

Q: You know what's just about as cool as finding a surprise PWE in your mailbox?

A: Forgetting you sent a PWE to someone and reading about it on their blog.

Man, I think I'm losing my ability to hold any short-term memories. LOL