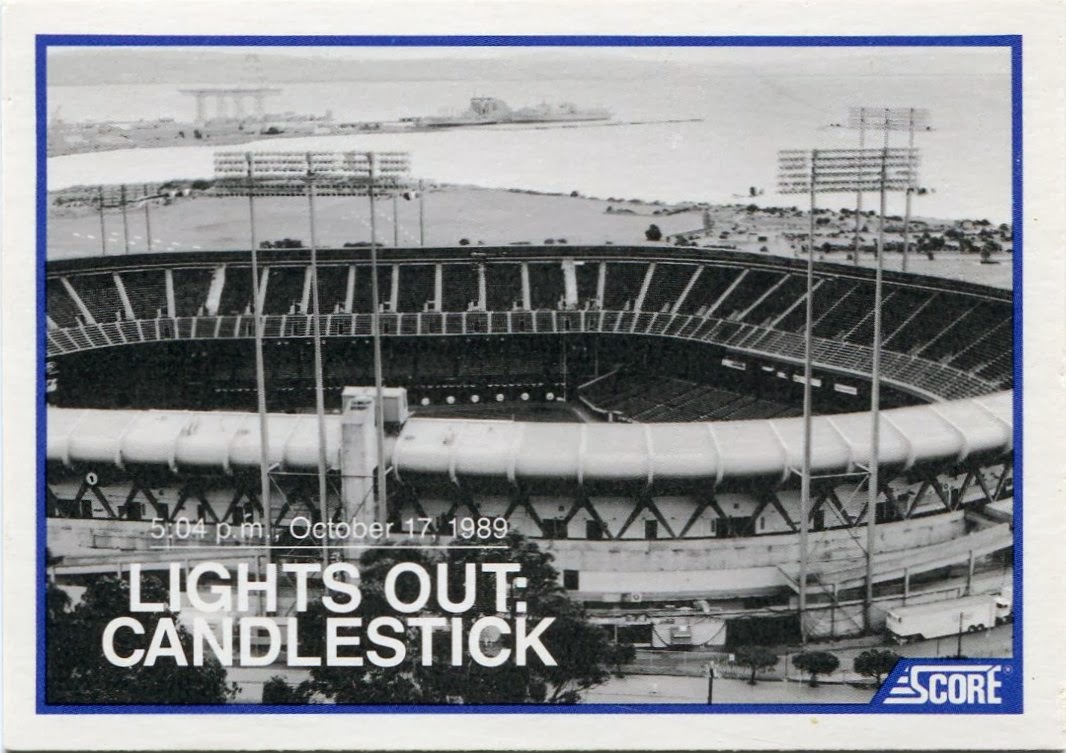 For some moments, you simply had to have been there.

I've seen the clip of the World Series broadcast at the exact moment the 1989 San Francisco earthquake hit on numerous occasions. It still remains one of the more shocking pieces of film I've ever witnessed.

Even so, I wasn't around when it actually happened on October 17th, 1989. I wouldn't be born for another three years.

Because of that, I don't think I could ever truly grip the utter craziness of that particular moment. It was definitely one of those things where you had to be there. And I wasn't.

Even though it remains one of the more striking moments in baseball history, I didn't think any cards documented the earthquake. I'm not sure companies wanted to remind people of it at the time.

But, lo and behold, there'd been one floating out there all along. It came with a bunch of other terrific cards from my good buddy Mark a while back. (Which is interesting, because his great post about horizontally-inclined cards helped inspire today's GOJW theme.)

In their usual way of taking on projects that other companies ignore (see: Steve Garvey's and Graig Nettles's final cards), Score was the only brand I know of that documented the infamous earthquake.

They could've easily used a regular color photo of the now-defunct Candlestick Park, but I appreciate the black-and-white quality. It gives the shot a sense of eeriness, something that was definitely felt by many after the tragedy.

It's safe to say that this horizontal piece certainly stands out from a lot of what card companies were churning out in 1990.

It's yet another chapter in the saga of Score's underrated greatness.
Posted by Nick at 2:30 PM

Wow. It's always amazing to me to see a junk wax card for the first time only a quarter-century later. That's a beaut.

Thanks for making me feel OLD. I was watching on tv when it happened, and I literally stayed up all night watching the news. Earthquakes have always shaken me up (sorry). Went through a couple of big ones growing up in So Cal.

I think you nailed it, Nick: Score's underrated greatness.

Great card. I wasn't at the game, but I definitely felt the quake. I've documented the experience before on my blog... it was one of those events that I'll one day share with my grandchildren.

Put greatness in that!