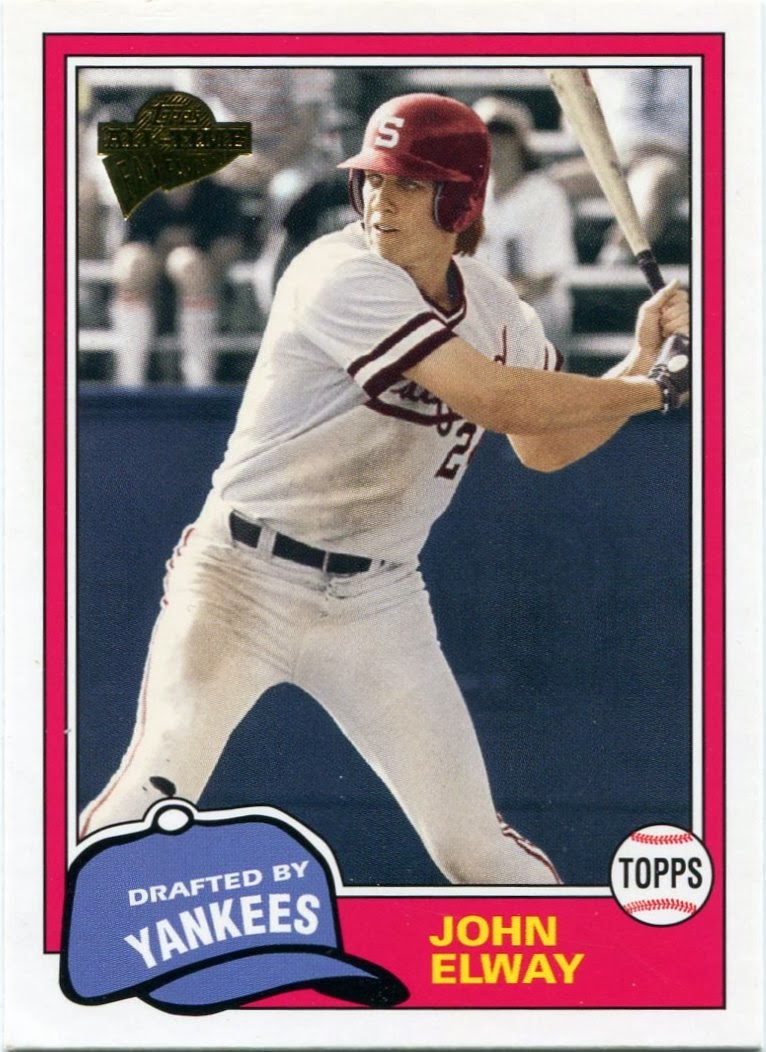 I am eternally confused by this card.

I'm still not clear on why exactly John Elway was included in the 2005 Fan Favorites checklist. Was it Topps's way of stirring the pot, or was it simply a good-natured attempt at having a little fun with one of the better brands in recent memory?

I tend to think it was the latter. Though I'm sure quite a few collectors were baffled when they pulled this card from packs back in 2005.

Personally, I'm not even sure how or when I acquired my copy, which further strengthens the confusing aura this card has.

I'm still not even sure whether I should consider it an official "zero-year" card. The reason I bring this up tonight is because I can't seem to get away from all the Super Bowl hype that's going on right now.

So, right now, I'm going to answer the question once and for all.

Should John Elway be a member of the "zero-year" club?

The vast majority of my "zero-year" cards feature guys who played in the bigs at some point. Elway, of course, never did.

Still, he wouldn't be the first football star to be nominated into the exclusive club. My induction of Ricky Williams (who played in the Phillies' farm system for a few years) certainly helps Elway's case.

Even casual fans of the NFL might know the draft day saga of John Elway. The Colts took him with the #1 pick in the '83 draft. But, since the future HOF quarterback wasn't keen on the idea of playing in Baltimore, the franchise swapped him to the Broncos.

What some might not know, however, is that Elway was actually drafted by the Yankees in the 1981 MLB draft two years prior. In order to gain a little leverage in hopes of the Colts trading him, he threatened to abandon football and play baseball.

Of course, that didn't end up happening. However, Elway did play for the Oneonta Yankees in 1982, the Low-A affiliate of the Bronx Bombers. He hit a sparkling .318 in 42 games that year. Maybe he wouldn't have been half bad at the National Pastime.

Though Elway was never serious about playing baseball professionally, he does indeed have a couple baseball cards floating around out there.

So, yes, I do indeed consider Mr. Elway a part of the "zero-year" club.

It only took about nine years to decide.
Posted by Nick at 6:15 PM

Back in 82 got to play on that same field in Oneonta. Part of a double header with some college allstars. The Oneonta yanks with Elway played the second game.

I never gave that card much thought other than it was a fun card in a great series of sets. The ESPN film on the 83 draft, which I'm guessing you saw, was fascinating. It's on Youtube:
https://www.youtube.com/watch?v=3t-HkEWAwOo