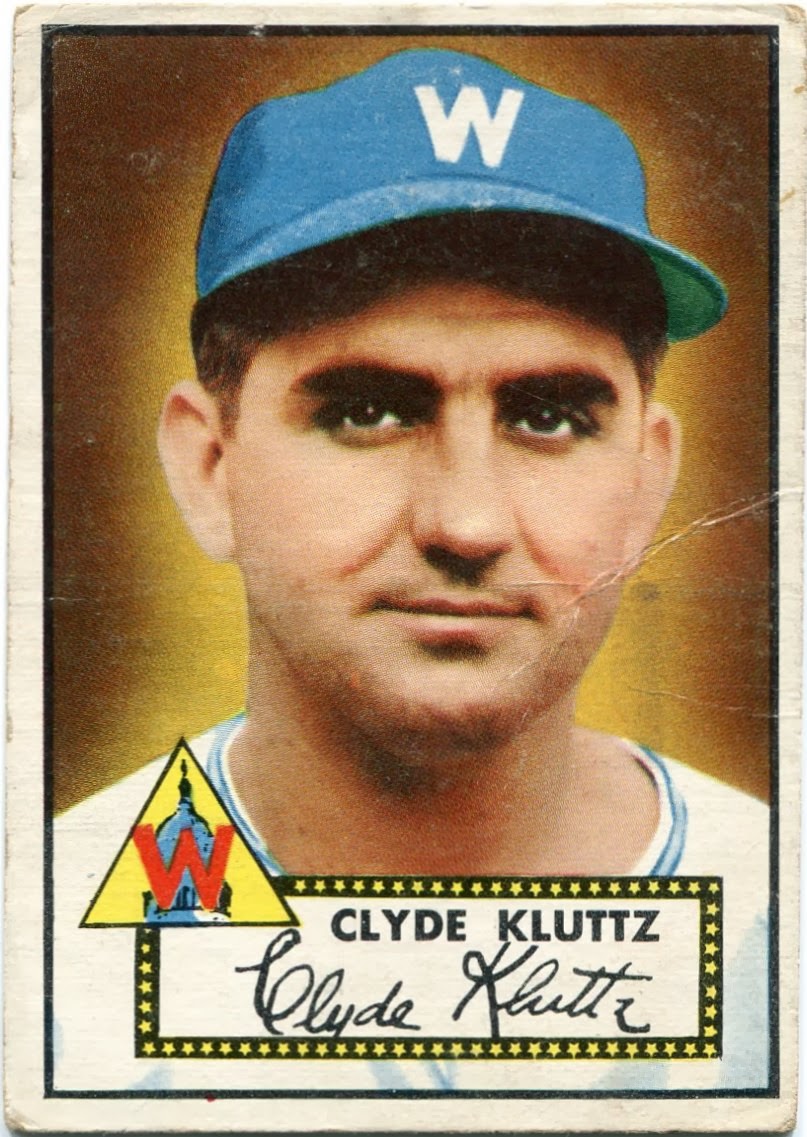 After years of dabbling in almost every sport, I started to exclusively collect baseball cards in 2005.

I wanted to cement my full-fledged entry into the baseball market by picking up a few great cards. In fact, I still remember what my very first task was.

At that point, I didn't have any in my collection. I wasn't a huge vintage guy in my younger days, believe it or not.

In 2005, I started to wise up a bit. I realized that '52 Topps is perhaps the most influential set ever made, and that I had to own something from it. (I didn't have the cash to buy anything of a big star, so I settled on Clyde Kluttz because of the simply hilarity of his name.)

Without the iconic 1952 design, I'm not so sure we'd have the beautiful, colorful photography we have today. Or well-framed nameplates. Or stats on the back.

Plus, there's a good chance Topps would've been a long-lost company. Heck, cards may not exist at all here in 2014 had it not been for '52 Topps.

Though the famous '52s are probably at the top of the hill, this hobby has been filled with influence throughout its history. 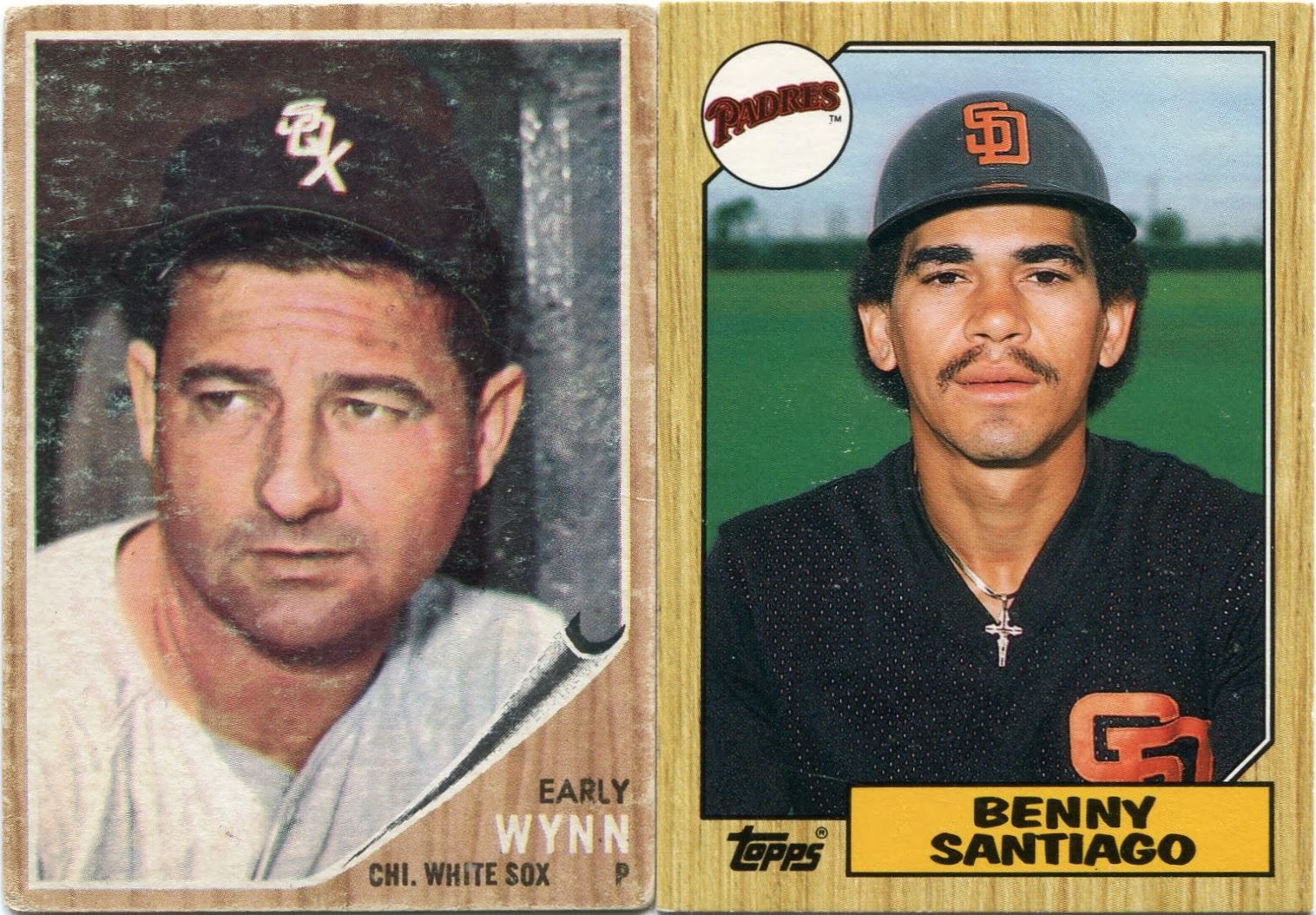 This may be the most obvious instance.

Topps went into uncharted territory by incorporating wood grain borders into their 1962 release. The end result was probably one of the more famous sets of the '60s.

You can't tell me that Topps didn't have 1962 in mind while they were drawing up their blueprints in '87. I doubt it was sheer coincidence.

In the case of wood grain, though, lightning managed to strike twice. The '87 design is still among the all-time best for many collectors.

In fact, I tend to think the '87 design is better remembered than the original '62s. 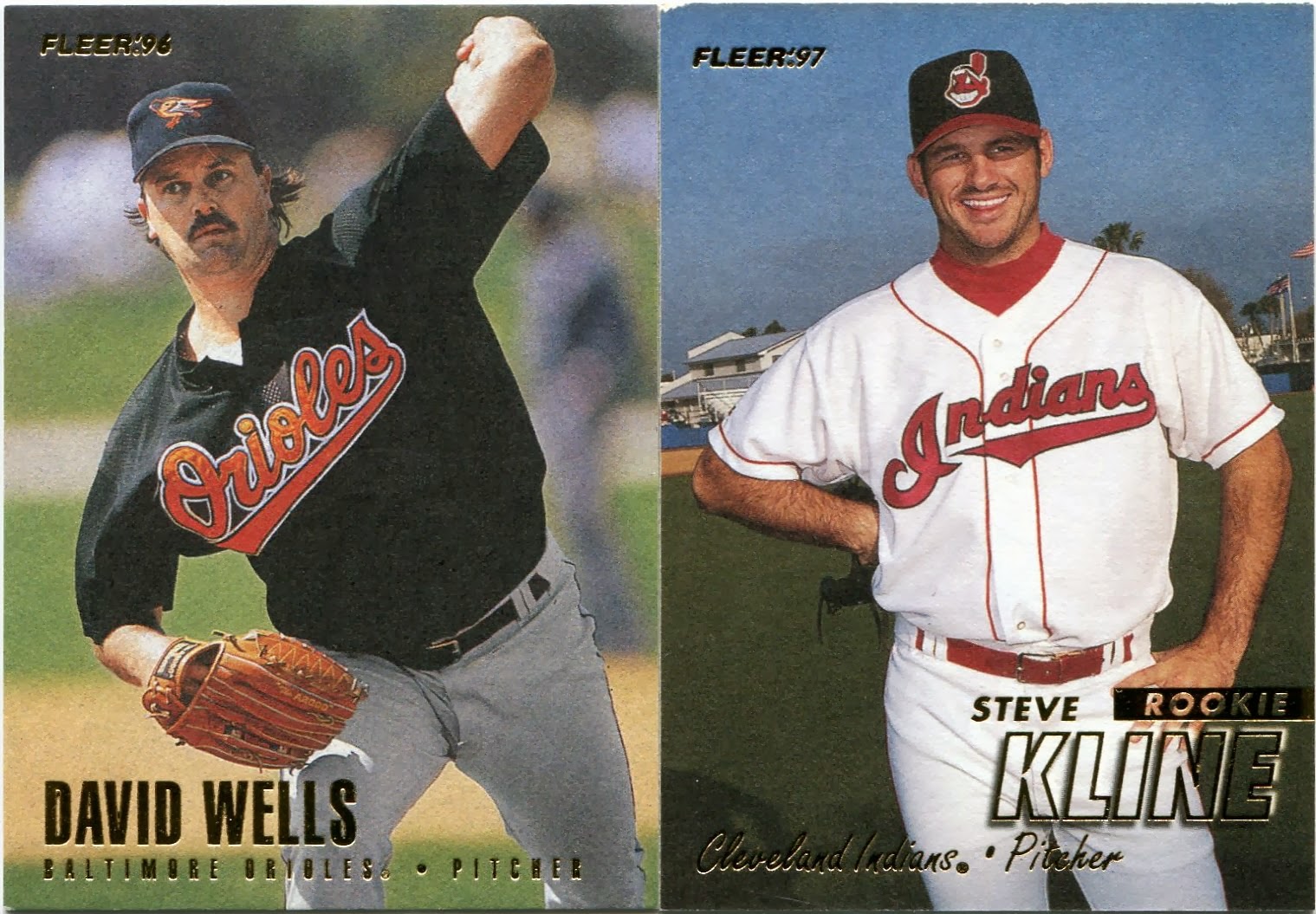 Topps and their wood grain influence were spaced 25 years apart.

Some card companies don't wait that long for inspiration. In the '90s, almost every Fleer set seemed to influence the next.

I think that's best shown by their 1996 and '97 releases, a couple of my underdog favorites from the brand's history.

Fleer incorporated full-bleed photos and strategically-placed gold foil nameplates into their 1996 design. The most striking aspect, however, is the matte-like finish that the set has. It's something that the hobby hadn't really seen before, and hasn't since.

I guess Fleer liked what they did in 1996, because they drew on a lot of that set's pluses for their checklist the very next year.

In what would be their last Flagship base set of the 1990's, the company once again mixed the gold foil/full bleed photos/matte finish combo into their product. The result was another fine set, but not an exact duplicate of the year before.

If this is any indication, influence doesn't have to be a slow-moving process. 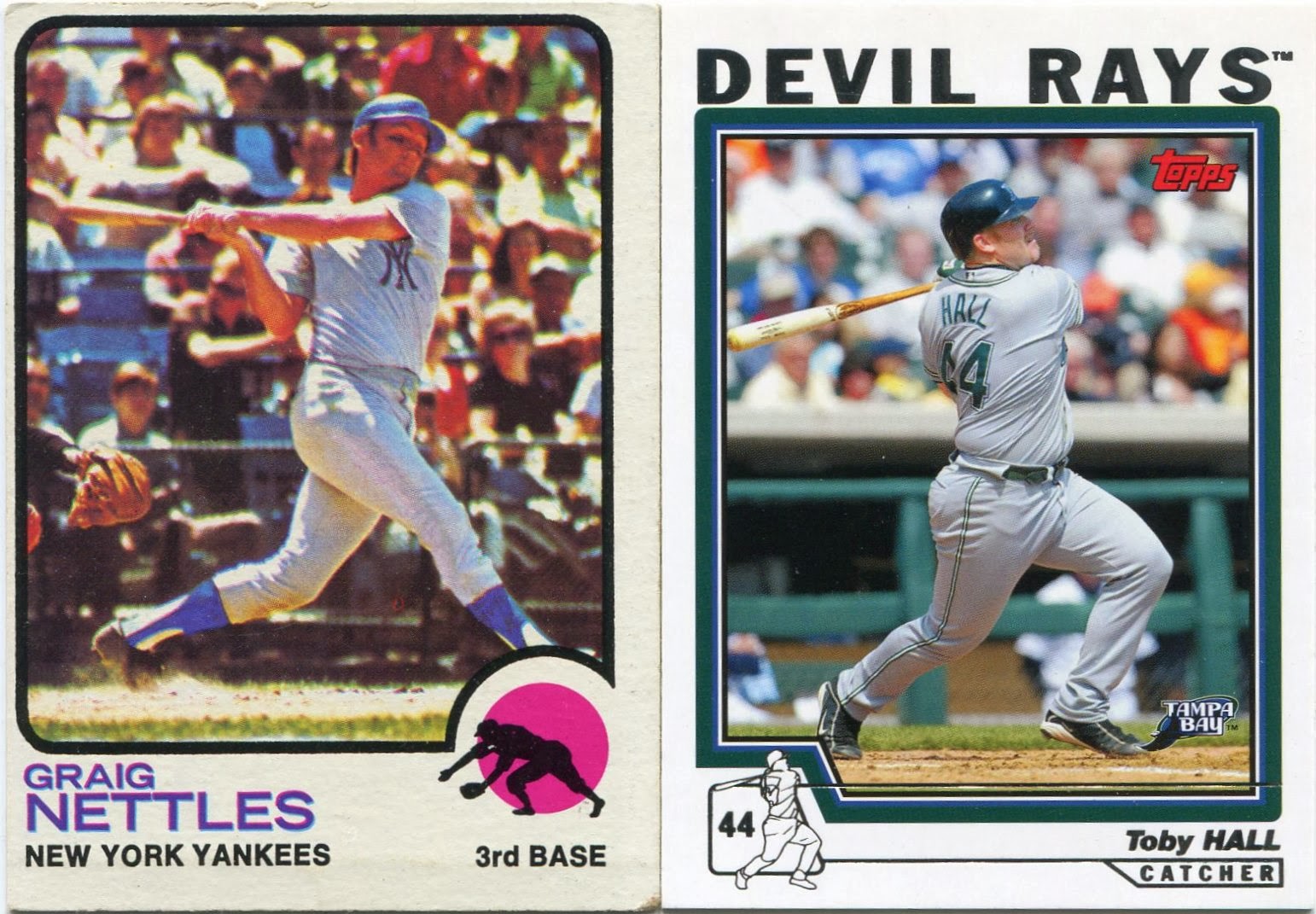 After a few years of experimental colors, Topps returned to the standard white borders in 2004, something that was present in almost every vintage set ever made.

The main influence I see, however, is the little shadow figure at the bottom of each card. As one of my favorite little innovations in cardboard history, 1973 Topps was pretty much the first design to ever make use of it.

Thirty-one years later, Topps took the shadow guy and refurbished him. Instead of a seemingly random image, the 2004 edition of Mr. Shadow featured an exact outline of the very photo featured on the front of each card.  Topps even threw in the player's jersey number for good measure.

In the grand scheme of things, Topps did influence themselves quite a bit. 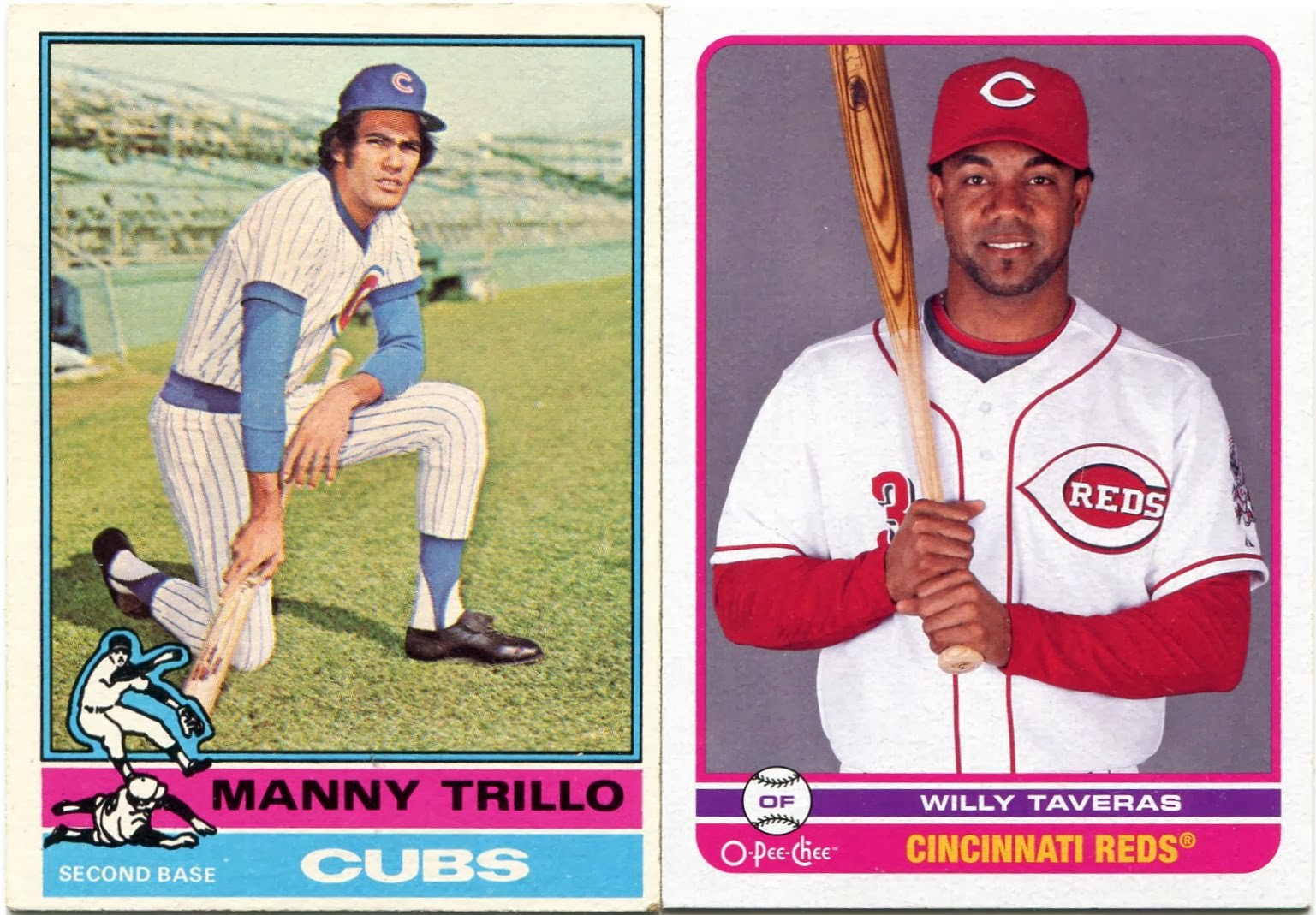 Still, I'd argue that they ended up influencing other card companies as well.

When I opened my first packs of 2009 Upper Deck OPC, I remember remarking the similarities to 1976 Topps.

Both feature colorful borders as well, each of which appear to be coordinated to the team featured on the front.

Both sets listed the player's position to the left of the name, though Topps used another shadow-like image in the process.

Perhaps that was another influence from 1973. 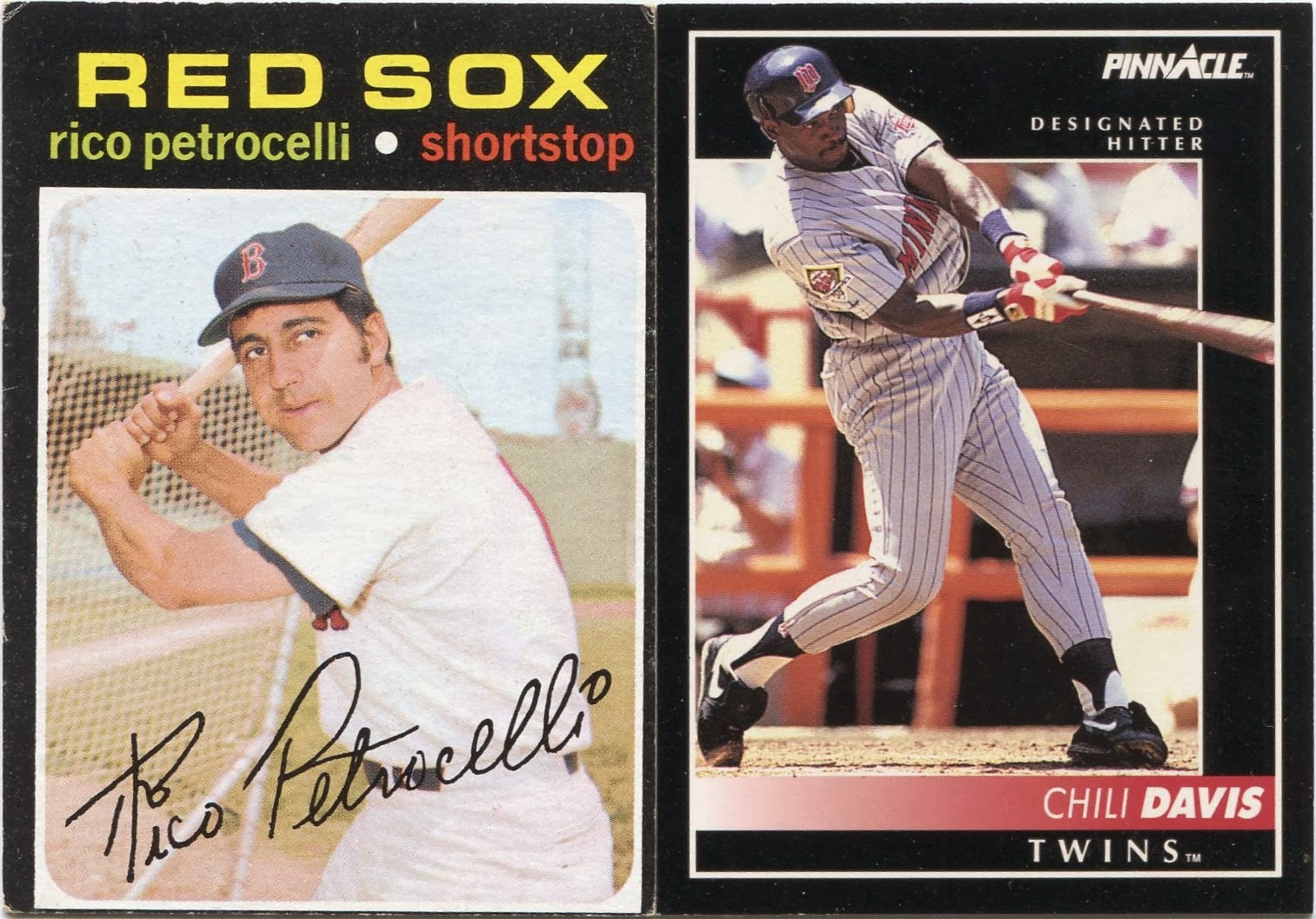 Every black-bordered set in history owes a great deal of gratitude to 1971 Topps.

After years and years of muted colors, I'd guess that a lot of collectors were shocked to find such striking black borders in '71 packs. I think the set most certainly pushed Topps to create the rest of the iconic, outside-the-box designs that the '70s would hold.

Aside from '71 Topps, I think the best black-bordered set ever made is 1992 Pinnacle. I know I'm not the only one who thinks so.

Sets like that wouldn't have been possible without the influence of 1971 Topps. 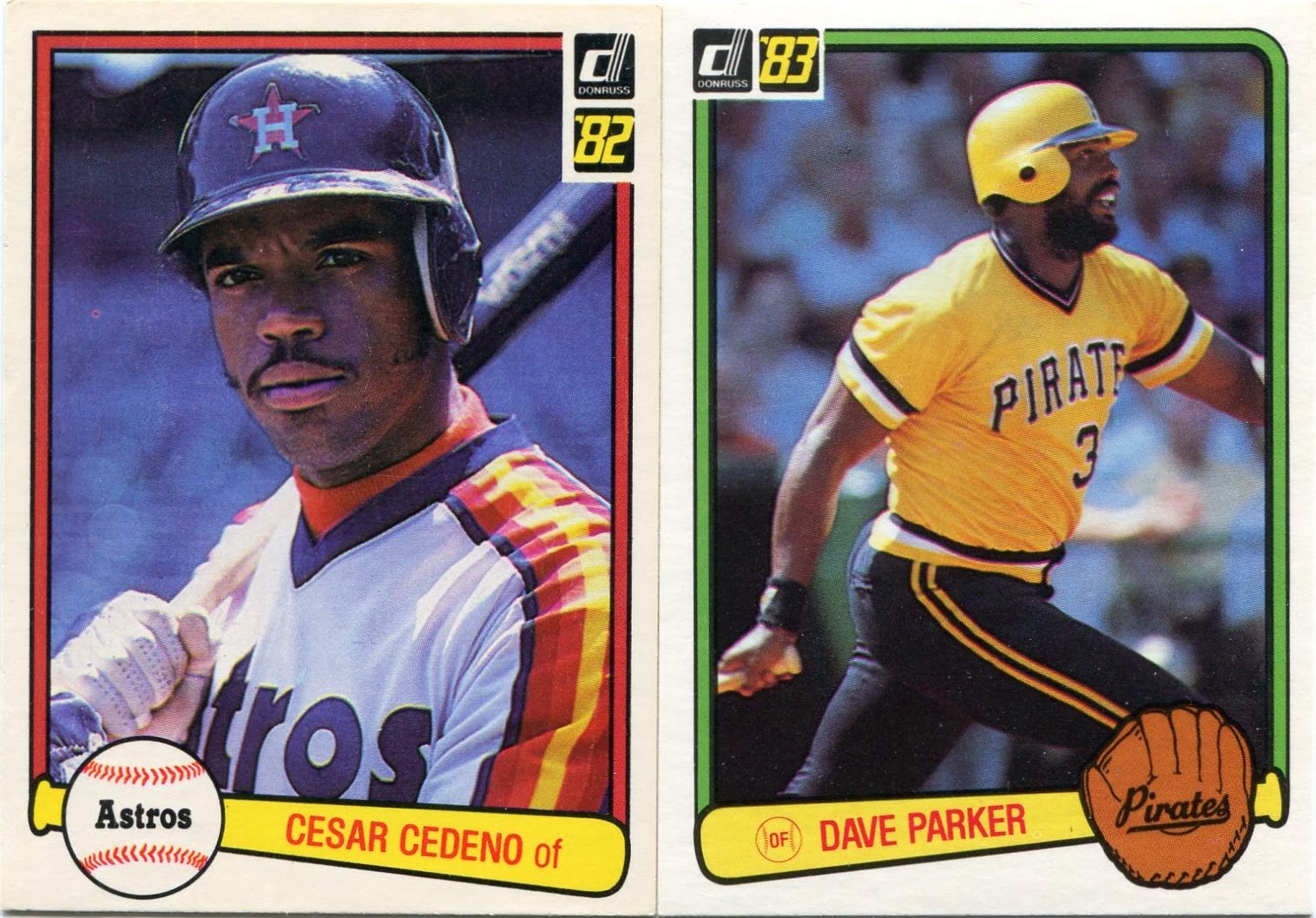 Did Donruss take their influence a little too seriously in 1982 and '83?

Though I used to be appalled that Donruss would basically repeat their design from one year to the next, I can see their way of thinking nowadays.

Donruss knew they had a good thing going, and wanted to see how much mileage they could get out of it.

I think the influence was just a little too obvious for a lot of people. After all, most good sets try and capitalize on past successes and combine them with new ideas. This hobby will forever be one of heavy influence.

That's part of what makes it great. 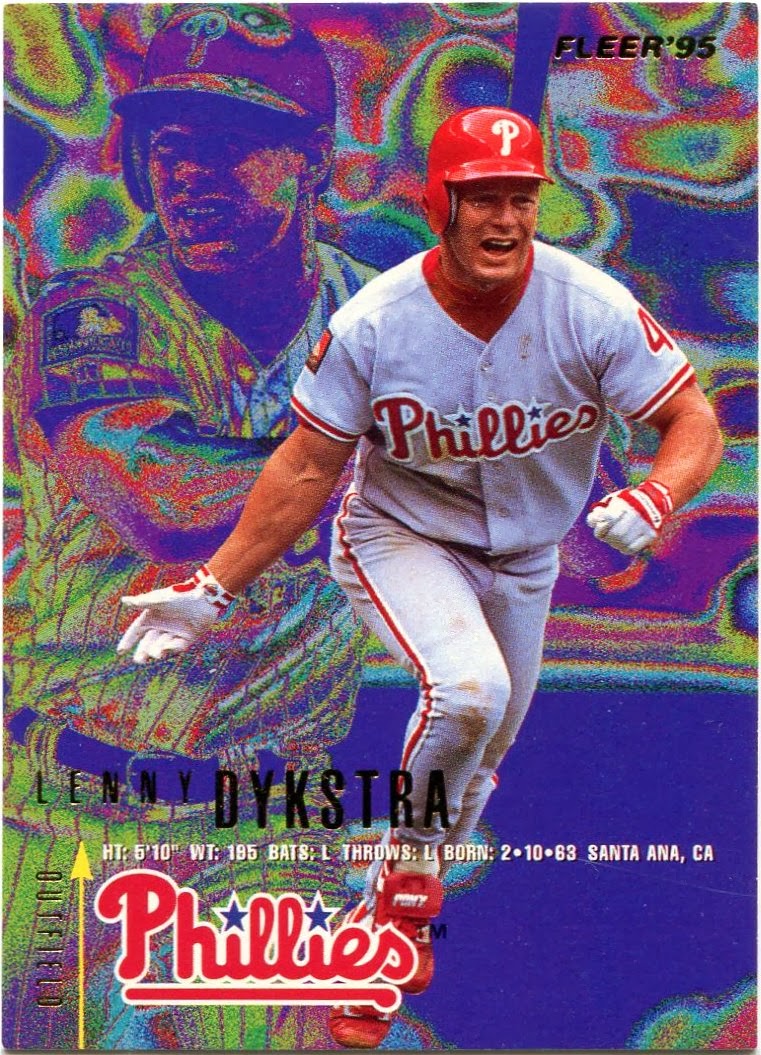 By the way, Fleer was certainly under the influence of something in 1995.

What that was, though, I'm not sure.

The Fleers and Pinnacle are definitely givng me a nostalgia burst. I've always had a strange fascination with 95 Fleer too. I remember the inserts being very cool for both baseball and basketball.

Awesome post! I considered doing a similar post... based solely on Topps cards. I was always intrigued by the similarities between the following years: